'twas the day before christmas

i kicked off christmas eve day with my longest run yet - a 9-miler.  i'd already done 8.5 last week and 8 the week before that, and while that's definitely a big deal for me, i was totally unprepared for what happened later that day.  dun dun dunnnnnn.

it was really a pretty normal day - i hopped in the shower to clean up, had a little lunch with the teen and the bean, and then when i laid down with the bean for her nap, i got slammed with one of the worst headaches known to man.  i couldn't even sit up, it was so bad.  ugh.  and on top of that, i had a super queasy stomach.  this meant that although i was hungry, i didn't want to eat anything for fear of upsetting my tummy further - which also meant that i couldn't take any advil or motrin because i get super sick taking anything on an empty stomach.  talk about a sucky ass catch-22.

as a result, i wasn't able to make dinner, the girls got up and made cookies for santa without me, and the hub and the teen took charge of wrapping all of the presents.  i missed out on all of the christmas eve fun that i was so looking forward to.  so sad.

my friend aline shed some light on what likely caused my misery - not drinking enough water during and after that run.  i thought i'd hydrated sufficiently, but obviously i should've invested in the 4-bottle belt instead of cheaping out on the 2-bottle i did pick up.  damn.

but i did have to force myself to get up before the next morning, to wrap the few presents i'd picked up for the hub and stuff his stocking with some silly things.  and when i got a look at all of the work my family had done while i was totally knocked out, i got a little teary.

the stockings were hung by the chimney with care, in hopes that st. nicholas soon would be there. 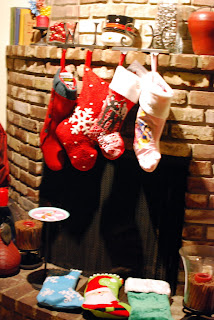 and he had indeed come and gone, leaving this bit of evidence behind. 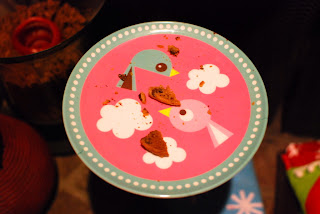 even more proof was in the living room, under the tree which had been completely present-free just hours before. 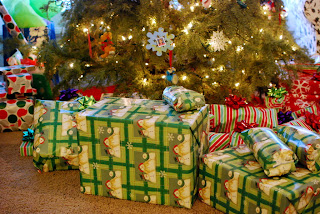 it was the first christmas eve since i'd become a mom that i hadn't been able to spend with my kids (i can't dwell on this too long, or i'll start crying and won't be able to stop).  thank goodness for my wonderful hub, who spent the whole night alternating between checking on me, finding a place to order take-out for dinner, getting the girls fed, the bean bathed, spreading christmas cheer all around, and checking on me again.

Email ThisBlogThis!Share to TwitterShare to FacebookShare to Pinterest
Labels: it's beginning to look a lot like christmas, sadness