despite my yammering away about needing a recipe with precise measurements, i managed to totally wing it on three separate occasions this weekend.  i'm pretty excited to report that each experiment turned out pretty well, yay!  um, and everything i made was a sweet treat.  you expected nothing less though, right?

i love king's hawaiian bread.  like, the pantry is never without a package of it, and preferably the jumbo size from costco.  but i'd made the mistake of picking it up at fresh & easy the last time i ran out, and i was sad that it wasn't...fresh.  i managed to get through 3/4 of it before giving up and heading to costco for the good stuff.  so as i contemplated what to do with those last three slightly stale rolls, it came to me:  bread pudding.

i'm the only one in the house that likes this stuff, so i hit up the google for ideas on making an individual serving.  but the few recipes that turned up were all regular-sized creations, only baked in smaller containers like ramekins or cupcake tins.  boo.  and after perusing the basic ingredients that popped up in nearly every recipe, i decided to be a rebel and strike out on my own.

it's almost like making french toast, really - eggs, milk or cream, sugar, vanilla, butter.  one of the recipes i found involved heating the cream and adding butterscotch chips till they melted.  well, i like butterscotch.  and this sounded pretty damn tasty.  so i busted out my rolls and cut them up into little cubes. 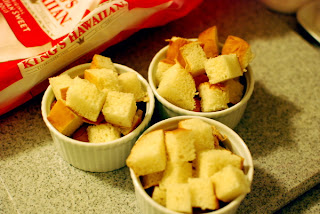 the custard came together pretty easily, and after i soaked all of the bread cubes i found myself with extra.  so i did what you would do - cut up another roll to use it up.  don't even try to say you wouldn't. 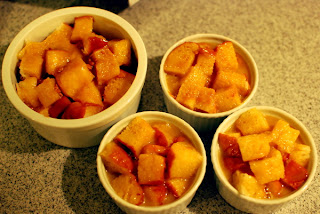 i ended up baking them a smidge too long, and the cubes on top browned considerably - another minute and they'd have burned, i'm thinking.  oops.  and instead of making homemade sauce, i took the lazy way out and used some of my precious starbucks caramel. 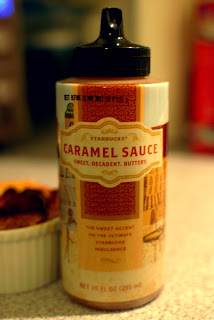 you can see i was so excited to sample my creation that i totally dribbled caramel all down the side of the ramekin and onto my freshly cleaned countertop.  don't worry, i cleaned it up.  with my tongue. 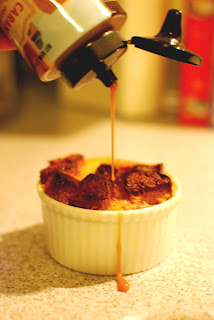 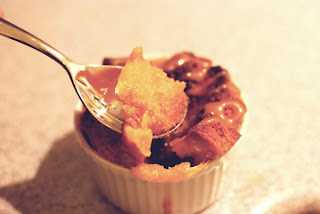 i wish i'd have pulled it out of the oven about three and a half (completely arbitrary number) minutes sooner.  but that's okay - this experiment still ended up being a major success.  super delicious, and definitely on the sweet side.  you could easily leave the caramel sauce off, but why?  caramel is GOOD, despite what my friends claire and diane think.  pffffft.  the bean loved it too.

i didn't exactly measure out my ingredients in the traditional way, but i eyeballed it all and i think i've got it.  here's how i did it:

slice about 5-6 hawaiian rolls into 1/2" cubes.  divide it equally into 4 ramekins, completely filling each one.  warm about 2/3 cup of heavy cream over medium heat till just before it boils.  whisk 2 eggs and about 1/2 cup of sugar together and then slowly stir in the hot cream (that sounds gross, huh) until fully incorporated.  add about a teaspoon of vanilla extract.  toss in about 1/3 cup of butterscotch chips, let it sit for a couple of minutes to let it melt, and then mix it together.  spoon it into the ramekins, soaking each piece of bread, and filling them about 3/4 of the way.  bake at 350 for about 35 minutes until the custard isn't all gooey anymore.  if you notice your bread starting to brown, cover it with some foil.

serve it with a drizzle of caramel sauce, or maybe a scoop of vanilla bean ice cream.

the original recipe that i based this on is here.  as much as i love marshmallows, i was actually afraid of sweets overload in this case.  i'm pretty sure i'd have been on the floor convulsing from sugar shock had i taken that extra step.  but if you want to try it out, have at it - and let me know how it turns out.

hopefully you won't be reporting from a hospital bed.
at December 12, 2011