for the last month or so, the bean was hard at work with her preschool class practicing for the annual christmas program.  last year, she was in the youngest group of kids - but this time around, she's in the pre-K class.  this means that she's totally an upperclassman, and as such, her class dominates the program.

like, i'm serious - the two younger classes each get to sing a couple of songs and hers takes up the entire second half of the performance.  yup.

along with the tunes she learned, she was assigned a short speaking part that was a portion of the christmas story told by the class.  on the very day we took home the paper with her lines, we started hammering those words into her little noggin and she had them memorized within the hour.  the bean is badass.

with the dress from last year still in her closet, worn only once, i decided i didn't want to spend a grip o'cash on another ensemble.  thankfully, old navy answered the call with a super cute, very appropriate dress in her size...on the clearance rack.  score!  the teen and rock-ell busted out some heavy artillery to make her hair all cute and twirly, and despite a couple of setbacks (i.e. the bean's first lesson in "beauty is pain"), she looked fabulous. 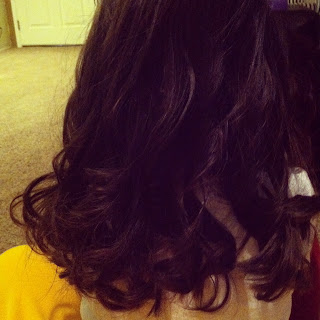 of course, we ran a little behind and raced to get her to the school on time.  i got her to pause for a moment, and yes, she does indeed have gum in her mouth.  d-oh. 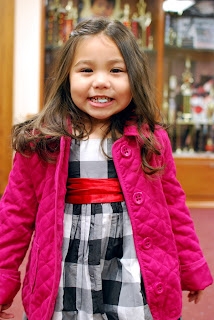 and did i have her spit it out?  well hell, i was all frazzled from the crazy ride over there and trying to figure out where her classmates were.  so yes, she went through the whole program chomping on a piece of gum.  mom of the year, right here. but hey, she had minty fresh breath.

by the time we walked into the gym, all of the seats in the center section were taken or being saved for family members.  bah!  so we had to settle for a section off to one side, albeit in the second row.  i sat on the end in hopes of getting some halfway decent shots, but i'd forgotten to grab the zoom lens and failed miserably.  not to mention, she was totally blocked by the halo one of the angels in front of her was wearing, and for a few minutes we weren't even sure if she'd made it onstage or not.  you can see her here, sort of, peeking around those angels (and she's the only one not blurred out, heh). 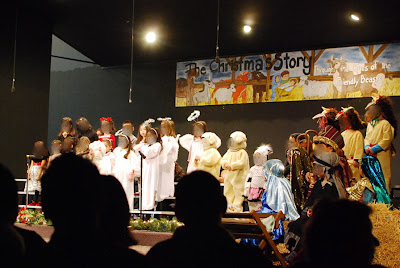 i was so proud when she took her place at the microphone and delivered her lines.  despite the gum in her mouth, she enunciated clearly and we could understand her easily.  or, as the teen pointed out, we had an edge because we already knew what she was saying.  i prefer to think that my child is a natural onstage.  tomay-to, tomah-to. 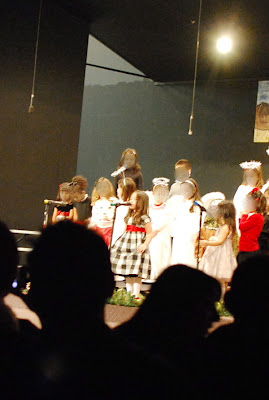 as the show wound to a close, she was obviously so over it. 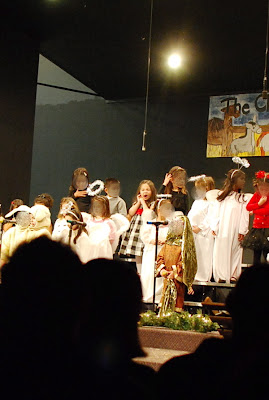 the kids stayed up there for a few minutes after it was all over while their parents (okay, including me) totally rushed the stage for a photo op. 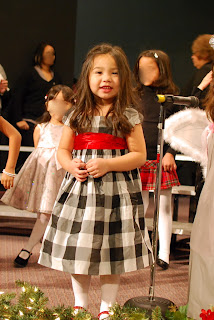 and outside, i got the hub to take this for me. 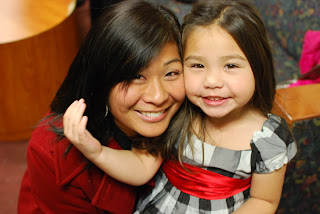 she was so sad that she didn't get to wear a costume like a lot of the other kids, though.  poor baby.  hopefully next year, if she does another year of preschool instead of going right into kindergarten, she'll get to rock that cow ensemble she so wanted to sport onstage.

Email ThisBlogThis!Share to TwitterShare to FacebookShare to Pinterest
Labels: it's beginning to look a lot like christmas