hanging out in the OC

remember a couple of weeks ago when i mentioned that i'd almost gotten to meet tamra barney from bravo's "real housewives of orange county"?  it's really the only show out of the RH franchise i've ever gotten into, and tamra is totally my favorite out of the housewives.  when the last season ended, she and her fiancé were looking into opening their own gym, which she's been posting about on twitter and facebook.

so when she tweeted this: 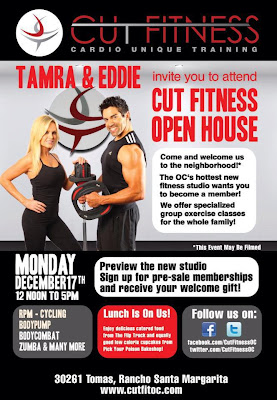 well...you know what comes next, right?

after seeing the gym's address, i realized that it was really close to my friend mommybelle, who i hadn't seen in forever.  she lives an hour-ish away from me now, and so i thought it would be nice to head down there to have brunch and catch up on what she's been up to.  and, you know, if i had time afterwards, maaaaaybe mosey on over to this open house and check it out.  heh.

she suggested meeting up at cinnamon productions, which she hadn't yet been able to try even though it's mere minutes from her house.  i got to see her youngest son, who is just as cute and adorable as can be.  i hadn't seen him since he was just past the newborn stage, and it was fun to see how much he'd grown.  mommybelle and her husband sure make some big ass kids.  haha!  anyway, we had a great time munching on yummy breakfast.  i really need to make more of an effort to see her more often, although our friendship is the easy breezy kind that you can just pick up where you left off no matter how much time has passed between visits.

when we finally parted ways, i headed on out to cut fitness.  it was only a few minutes away, and it was exactly noon as i pulled into the parking lot.  i seriously felt like such a groupie, arriving right on time for this thing, and dressed in street clothes no less.  so i sat in my car for a good 10-15 minutes, reading stuff on my phone and trying to kill time.  what a dork, right?  i know.  I KNOW.

i totally gave myself a pep talk while i waited, and then i decided i just needed to suck it up and get out of the car and go inside.  besides, i probably looked like a total creep sitting there in my car, looking around furtively from time to time.  sheesh. 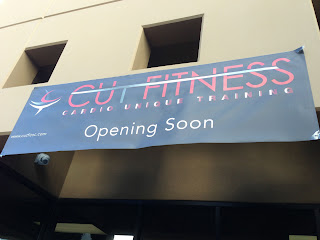 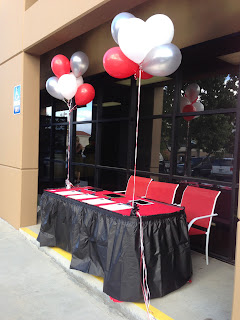 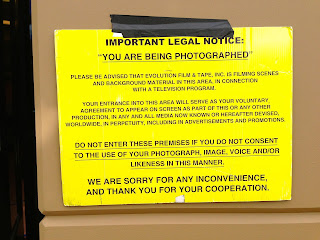 the first thing i saw when i walked in the door was the giant camera on the floor. 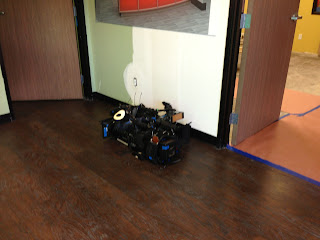 there was a woman standing in front of me wearing some ridiculously tight black leather pants with a pair of incredibly tall stilettos.  i was already mocking her in my head when she turned slightly and i realized that it was alexis bellino, part of the RHOC cast (or is she?  i thought i'd read she wasn't coming back for the next season.  huh). 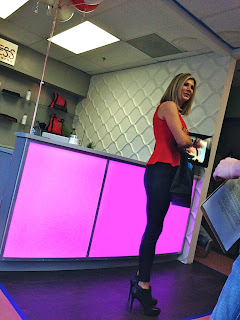 a moment later, tamra and her fiancé eddie strolled in and the squealing and hugging commenced.  yes, i totally tried to take some pictures on the sly, but they all came out either blurry as hell or with my finger in the way.  i really need to work on my stealth camera moves.

one of the show producers came to talk with them and asked them to redo their hello hugs for the camera, and asked where alexis' douchebag husband jim was.  not in those words, obviously.  so she picked up her phone and called him to join her at the gym.  i thought this was odd, considering the fact that he'd avoided the cameras for the most part last season and wasn't much of a tamra fan, but i guess they do what they have to for that bravo paycheck, yes? 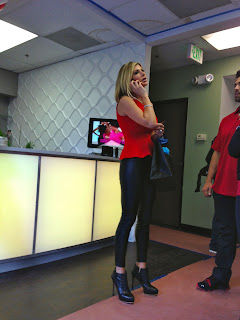 when the opportunity came to say hello and get a photo, i took that shit.  this makes me somewhat of a hypocrite considering i really don't like alexis much, but i had to, right?  she was actually quite friendly and didn't hesitate to show off her best side when i asked for a picture.  i think she looks much better without her crazy long extensions, and she is prettier in person than she comes off on camera. 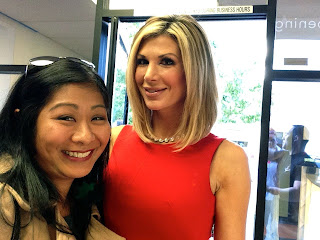 i decided to walk around the gym and check it out.  it's still under construction, with big chunks of unfinished areas, but it's a nice space and looks like it's going to be a great facility for the group classes they're spotlighting. 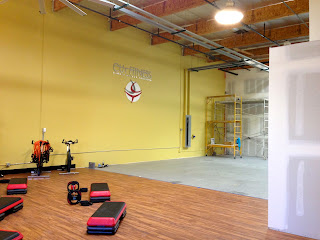 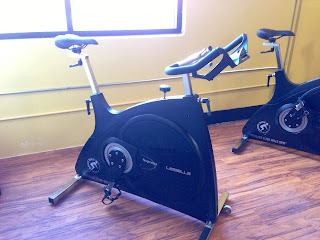 this high-tech piece of machinery was impressive.  you stood on it, held onto the bars at your side, and it calculated all sorts of stuff.  weight, BMI, muscle percentage on arms and legs, all sorts of stuff.  i'm happy to report that i measured in the "normal" category in everything, and the report said that my upper body has a higher percentage of muscle than my lower. 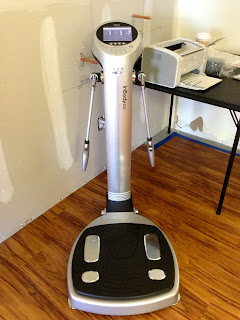 lots of filming was happening as tamra and eddie took alexis and her now-present husband on a tour. 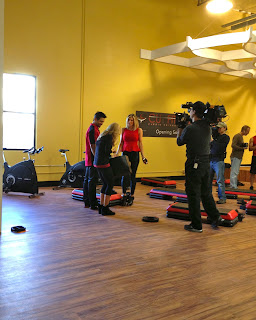 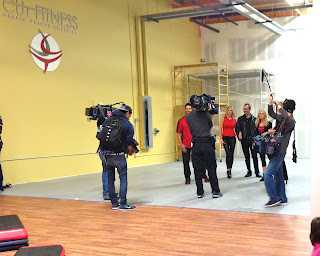 as i stood there gawking like a starstruck fool, two more housewives walked in.  vicki gunvalson was first, making a beeline for the restroom to change into workout gear, and then gretchen rossi walked in. 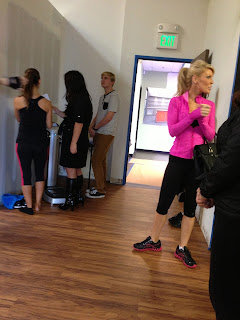 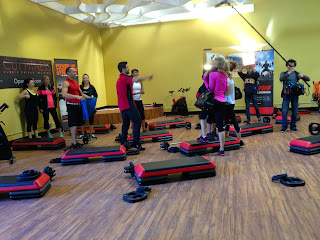 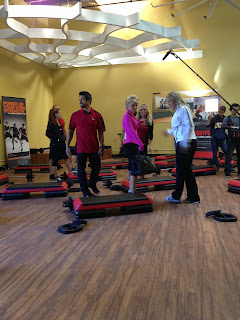 i recognized a couple of the instructors as the ones who'd led the les mills bodypump/body combat classes at pamper me fabulous a few weeks ago.  when i approached them to say hello, they were both super sweet and remembered me from that class i'd taken with them.  jericho was more than happy to take this with me. 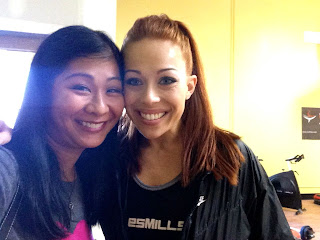 before they all gathered to do a class for the cameras, i got my chance to meet both tamra and eddie. 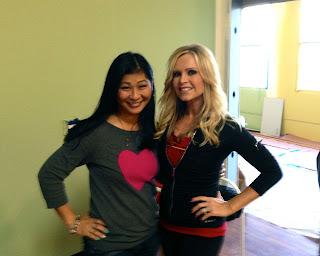 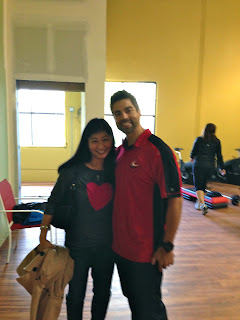 word vomit.  i had it when, in my nervousness, i blurted out to tamra that i was the one who'd tweeted her when she was at disneyland the week before.  good god.  can you say "stalker," boys and girls?  i know you can.  ugh.  luckily, she just grinned at me and said "oh yeah!  that was a great day, did you guys have fun?"  i stammered out some stupid reply, and then she asked me if i was going to work out with them.  well, hell!  had i known i'd be able to do that, i would've packed some clothes and gotten to join the class that was FILMED FOR THE SHOW.  dammit dammit dammit!  i mentally kicked myself so hard, i should have been all bruised up.  so. damn. bitter.

instead, when this particular episode is aired, you might catch a glimpse of me in my jeans and boots, lurking in the background like a major creep, taking pictures of the action with my phone.  actually, most of the photos i took weren't even mine - jericho had asked me if i would take some for her with her phone. 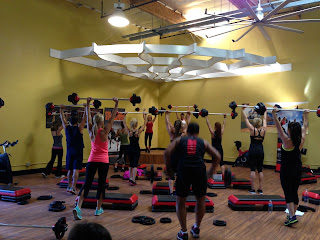 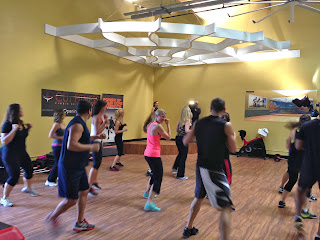 they really only exercised for about ten minutes or so with the cameras rolling, and then they were done. 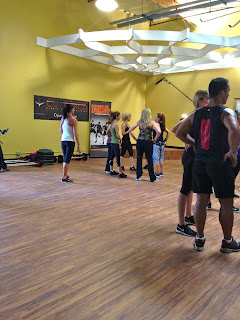 and i managed to get a picture with vicki, but not until after she'd repaired her makeup and dabbed off the sweat she worked up.  in ten minutes. 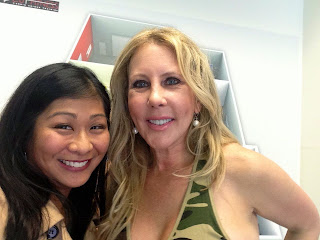 tamra had invited me to grab some lunch from the food truck that was parked in the back of the building, but i was still stuffed from brunch.  too bad.  we all know how much i love freebies. 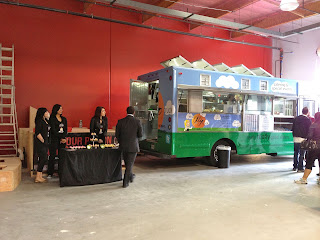 i really wanted to catch gretchen for a picture, but never got the chance.  and then as i was pulling out of the parking lot, i saw her walking out the door.  i might have stomped on the brake, swung a u-turn, and contemplated jumping out to meet her.  but then i snapped the hell out of it and realized how ridiculous that would look.  holy shit, i almost made the biggest ass out of myself just for a chick on a freaking reality show.  mind you, it's a show i love and never miss - but still.  damn.  how effing lame would i have looked?  oh em gee.

the gym is scheduled to open sometime in january.  i'm debating getting a group of girls together to head down there and take a class.  who's in?
at December 27, 2012

Email ThisBlogThis!Share to TwitterShare to FacebookShare to Pinterest
Labels: celebrity sightings, reality tv for the win