on friday, the bean's class participated in their school's annual christmas sing chapel.  dumb name, i know, but i didn't make it up.  anyway, i put her in a dress i'd made in a frenzy the day before, along with a scarf that i threw together in five minutes that morning because she insisted she had to wear one. 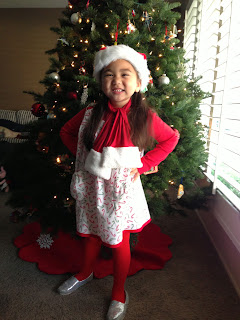 the hub and i sat together on the bleachers, waiting for her class to get their turn on the stage.  and when they did, it was really cool to watch them perform their song using bells instead of their voices.  i was all puffed up with pride over seeing the bean front and center, shaking her bells for all she was worth. 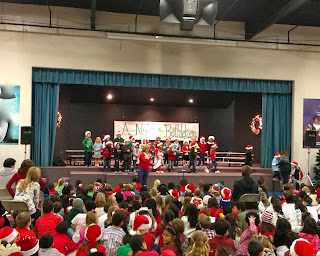 and then when it was over and they sat back down, i glanced at my twitter feed on my phone and saw it:  a breaking news post about yet another school shooting in connecticut.  while the news was distressing to say the least, i tried to push it to the back of my head while i focused on the rest of the performances.  and afterwards, we went over to say a quick hello to the bean before she headed back off to class for the rest of the day. 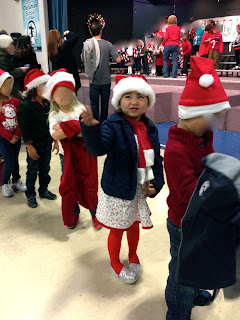 as i walked back to my car, i went back and scrolled through my twitter to catch up on what else had been reported.  the news was grim, and just so upsetting.  unless you live under a rock, you already know that i'm referring to the horrific shooting at sandy hook elementary school.  with every new detail that i read, learning that the victims of this heinous crime were sweet, innocent children whose lives were just beginning, the sadness was overwhelming.  and while i was able to fight back tears as i drove to meet the hub for a quick breakfast, i lost the battle as we sat and talked about it together.

even though i had quite a to-do list of things i needed to get done, as soon as i got home i sat down and watched the news.  i just couldn't tear myself away from it, despite the terrible subject matter.  i'm a pretty emotional person as it is, but i don't think i've been this touched by something that didn't affect me directly since the events of 9/11.  and as the reporters told the story of what had transpired, shared photographs and live footage from the community that had been attacked by this disturbed individual, i just cried and cried.  i thought of those children, their parents, the school staff.  it's unimaginable, and horrifying, and sad beyond description.

when my phone rang and i saw the teen's smiling face flash on my screen, i kind of lost my breath.  not that i had any real fear that anything was wrong with her, only because the timing was just right.  i was choking back a silent sob when i answered, and although i tried to sound normal when i said "hey, babe," she knew instantly what was wrong.

hearing her try to comfort me while she was at school with her friends a couple of miles away somehow made me cry harder.  i really just wanted to hold her and feel her, strong and whole and healthy in my arms.  but she continued to talk to me even as i could tell she needed to get back to whatever she was doing.  that's love right there, man.  and it helped me immensely as i struggled to take a deep breath and pull myself together.

she'd really been calling to let me know she was going to head out to lunch with two of her friends after school, so i was surprised to see them walk in the door about ten minutes after school let out.  she took one look at my tear-stained face and opened her arms to me for a hug that i accepted gratefully.  and of course, i started sobbing again and she just held me until i stopped.

"you're gonna make me cry, mom!" she said, and reminded me of a funny story from the day before that'd had me gasping for air as i laughed and laughed.  it was just what i needed to hear, and coupled with her friend saying "awww, at least you look good when you cry," i snapped out of it.  when she turned her head and saw that i still had the news on, she gave me a stern look and ordered me to turn it off.

i did a lot of crying that afternoon, as i know a lot of you did.  and how could we not?  this is something that didn't happen in a rough neighborhood.  it wasn't a freak accident.  this was the suburbs, a school with ample security that could have been pretty much anywhere, usa.  i suppose that's the part that's most disturbing.

the president has delivered a couple of beautifully worded, touching speeches that convey messages of comfort, of assistance, prayer, and a potential for change so that this kind of tragedy doesn't have to be repeated.  i've managed to avoid the continual news coverage in a feeble attempt to honor the families and their right to privacy, although i know that sounds silly.  and i think the families, while dealing with their grief, are releasing photographs of those that they've lost so that the rest of us can see the faces of the sweet souls that were taken.  it's painful to see, and yet even more so not to.  even reading the list of the names and ages of the 26 people who died is difficult.

while the bean has no idea what has happened (nor do i think she needs to, honestly), she's been getting a whole lot of hugs and kisses this weekend.  the teen has been exceptionally sweet and loving too, and i've just been taking the time to really appreciate each moment we all spend together.  it's sad that it takes something like this to make you stop and cherish what you have.

my heart and thoughts and prayers continue to be with the community of newtown, connecticut.  if only the love of the entire country could bring back what they've lost.
at December 17, 2012

Email ThisBlogThis!Share to TwitterShare to FacebookShare to Pinterest
Labels: sadness