when you look me in the eyes

just a few days after taking the bean to see her beloved fresh beat band in concert, the teen's turn came when the jonas brothers came to the pantages theater for three sold out shows. 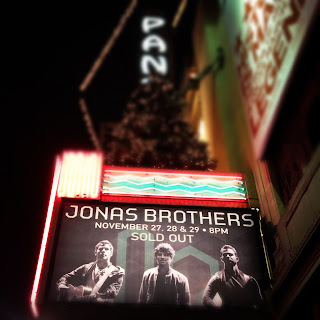 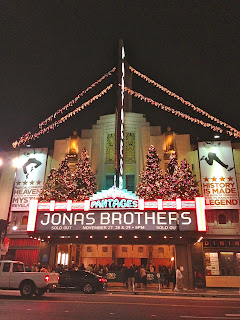 by some incredible stroke of luck, when i logged in several weeks ago for presale tickets, i managed to score some pretty awesome seats. 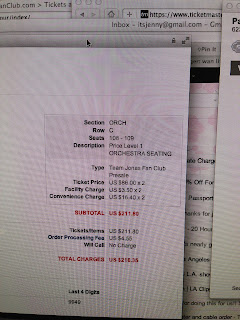 do you SEE that?  that's third row center, baby.  and oh, was i thrilled to break that news to the teen.  i honestly don't know who was more excited.  out of all the jonas brothers shows we've been to, this would be the very best seats we'd ever had.

picking up the hard tickets at the box office was so sweet.  we got to bypass the ginormous line that snaked down the street and sashayed right inside where it was nice and warm. 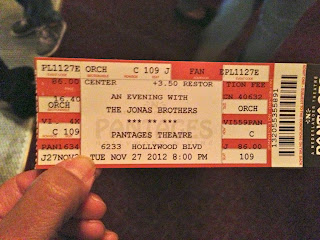 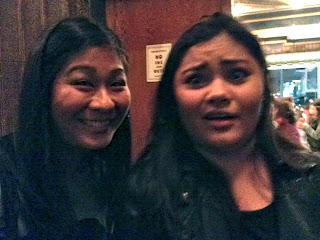 it just kept getting better and better as we made our way to our seats and literally squealed over how fabulous they were. 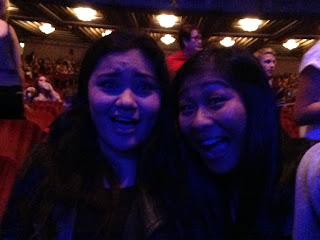 right in front of us, a DJ was stationed with a macbook playing all the current top-40 stuff.  it was definitely whipping the crowd up into a frenzy. 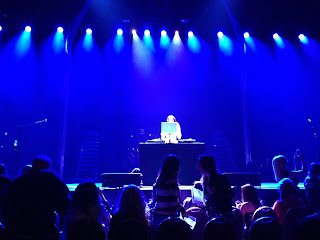 the view behind us.  we seriously couldn't get over how great our seats were.

when the DJ packed up, the lights went down and the curtain was lowered - well, i couldn't help but wonder if the pantages had ever experienced this level of volume before.  i'd had no idea that they booked anything but plays and musicals there.  and when the boys' silhouettes went up on that curtain...it was deafening, to say the least. 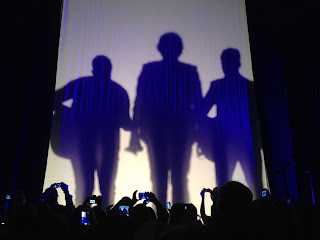 by the way, i'm not trying to pretend like i wasn't a part of the madness.  you know me - by now, i'm just as big a fan of the JBs as the teen is.  we were screaming our heads off and super excited over the first concert that reunited all three brothers onstage after about a 3-year hiatus.  although it was hard to imagine it getting even louder, it definitely went up a few decibels when nick, joe and kevin finally emerged. 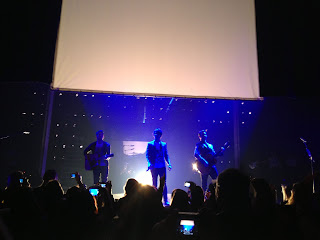 the first song had the entire crowd swooning.  it took just a couple of notes to recognize the very first JB song i'd ever heard - "when you look me in the eyes." 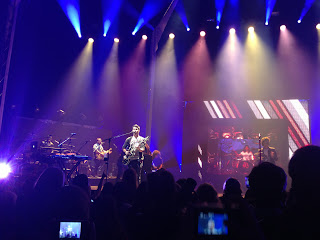 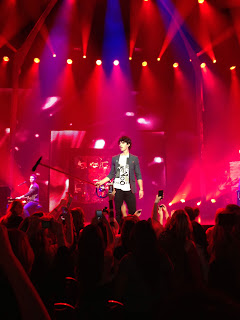 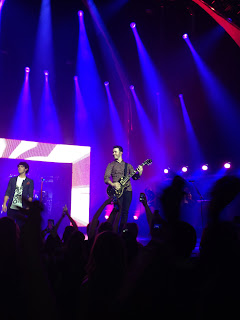 i'll try not to bore you with too many pictures.  just know that i have a ton of 'em that are clearer than any i've ever taken before.  and it was a really fun show that incorporated both old and new material, without any crazy stunts or pyrotechnics needed.  plus, we got to hear all three brothers on some of the songs that nick and joe released as solo artists. 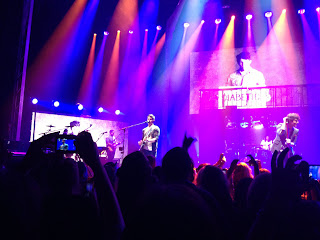 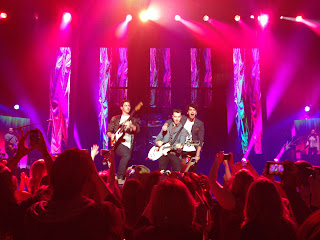 yup, we were pretty excited.  we were all hot and sweaty, and so close to the stage that when joe shook a water bottle out at the audience, well - we got wet.  and we didn't care.  and, there was a 3-second period of time where i swear to you, joe and i locked eyes.  we had a moment, people.  hey, from that distance, i don't think he could tell i was old enough to be his mama. 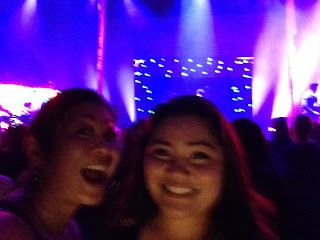 it was also great to watch the brothers take a step back and let their loyal band members take the spotlight on a couple of songs.  most rabid fans, the teen included, recognized these guys without introduction. 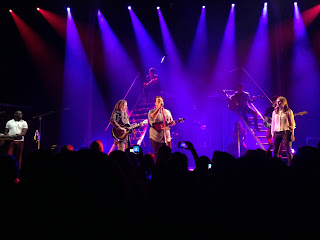 all too soon, it was over.  this particular shot came just after nick did what he always does at the end of a show - tossing his guitar pick for a lucky fan to take home as a souvenir.  it grazed my hand, as well as the teen's, before flying right behind us and into some girl's loving arms.  i tell you, that chick practically got shanked as she clutched it to her heart and screamed bloody murder. 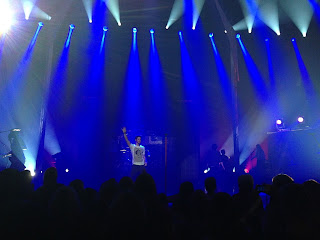 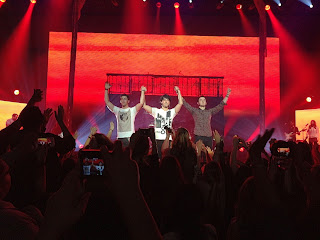 i'd started the evening wearing a tank top underneath a sweater with another jacket on top of that.  by the end of the show, i was down to the tank top with my perfectly flatironed hair tossed all helter-skelter into a ponytail. 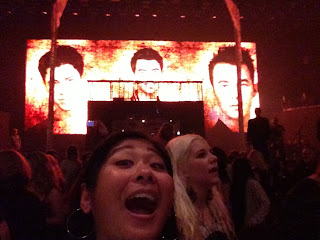 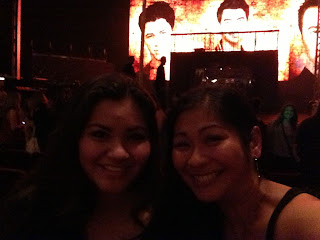 as we made our way back up towards the exit, i wondered how long the kid in this booster lasted in that loud ass arena.  as a parent, there's no way i would have subjected my small child to that level of noise. plus, it was late.  the boys had taken the stage at 8:30 and played for damn near two solid hours. 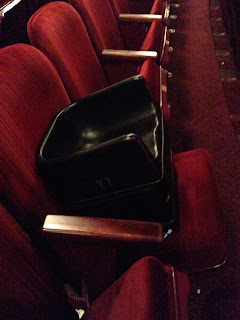 the teen had noticed someone's iPod left behind in the aisle.  it had apparently recorded the majority of the concert. 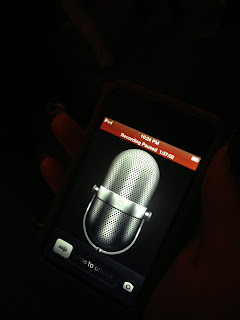 after dropping it off at lost and found, we headed home.

the next morning, i was browsing ebay when i came across something interesting - a pair of last-minute tickets for that night's concert going for a mere $50.  hot damn.  now, while the hub and i had dinner plans with one of his clients that night, that left one more show the next evening that rounded out the jonas brothers' trio of pantages appearances.  and when i checked out availability, i may have found a pair of decent seats for a freaking steal.  hoping that the hub wouldn't kill me, i clicked "buy now" and made my kid's day when i told her what i'd done.

and when i finally sucked it up and told him, i totally got the side eye.  "if we didn't have plans for dinner tonight, you'd be at that show too, wouldn't you?"  well, yeah.  i'm not gonna lie.  he obviously has vivid memories of the summer of '08, when we headed out to back-to-back-to-back shows at three different venues on three consecutive nights.


while our seats were definitely not as good as the ones we had that first night, at least we were still on the orchestra level rather than way above in the mezzanine. 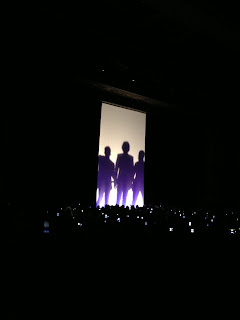 we were pleasantly surprised to find that the playlist was slightly different.  we still enjoyed most of the same songs, but in a different order and with a few extra bonus ones thrown in.  it was like being at a completely different show...sorta.  shut up, we were happy.

and when it ended, i followed the teen as we hotfooted it out the door and around the corner to park ourselves at the venue's exit.  we'd driven past it the first night and wondered what we were missing, and this time we decided to give it a shot and see what there was to see.  we got there just before the stampede of girls that gathered behind us, and braced ourselves for some potential pushing and shoving.  just ahead of us: 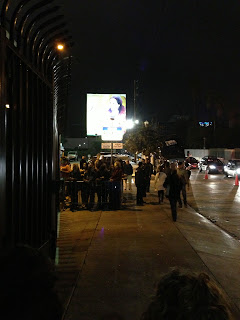 and right behind us. 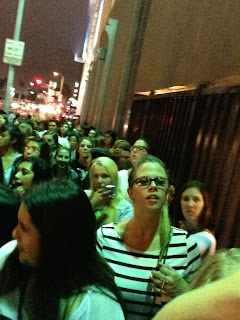 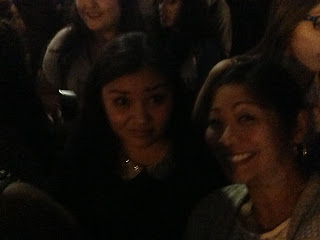 we must've stood out there for about half an hour.  it started drizzling on us, but we were packed in like sardines and couldn't have gotten out if we wanted to.  and when the screaming started up from across the way, we knew something was happening.  about 25 seconds later, the source of all the hubbub came through the gate and pulled out of the driveway.  and as we gazed in a dumbfounded stupor, a rear window rolled down and there was joe hanging out of it, waving at everyone with a big grin. 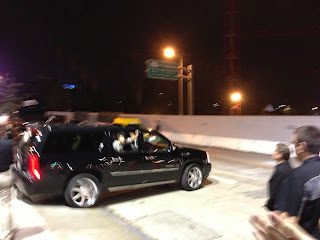 yes, that's a horribly blurry picture and you'd never know what the focus was on if you hadn't read that last paragraph.  and most of you probably really don't give even half a crap.  but it totally made our night, and then the hordes finally broke up and slunk off in separate directions.

we'd parked right across the street from the W hotel, and from the cheering and hollering we heard as we got closer, it was apparent that the getaway car had been sighted.  they must've made a wide circle and then headed back to drop the boys off at their temporary home.  we stood on the sidewalk and rubbernecked for a few minutes before getting in the car and hopping on the freeway towards home.

with the brothers hard at work on a new album slated to drop sometime in 2013, you know they'll be heading out on tour to promote it.  and of course, we'll be renewing the teen's fan club membership to get access to presale tickets.  duh.  although i'm actually pretty astonished that they've managed to hold on to a vast majority of their original fanbase despite their extended break.  and so many of those fans have grown up and moved on to current boybands (we overheard more than a few giddy one direction-related conversations over those couple of nights).  but the teen is a superfan, yo.  hard core.