on black friday, lilcee alerted me to a killer deal via ticketbastard for something we'd talked about briefly - disney princesses on ice.  after we coordinated our schedules and settled on a date, we managed to score pretty decent seats normally going for $75 for a mere $28.  sweet.

it was a chilly, rainy day, but that didn't dampen the girls' spirits one bit.  although the bean has been to a disney on ice show before, she was extra excited to see it with her BFF. 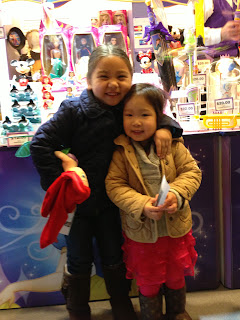 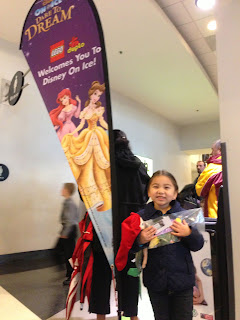 i'd perused the selection of show souvenirs briefly before settling on a program that came with a flower a la belle, while lilcee scooped up a light-up spinny toy for mini cee.  the bean took one look at that flashy business and gave me the eyes.  gah.  but we'd dawdled so long that the show had already started by the time we got to our seats, and we were trapped in the center of the row.  but hey, our seats really were pretty good.  way better than last time. 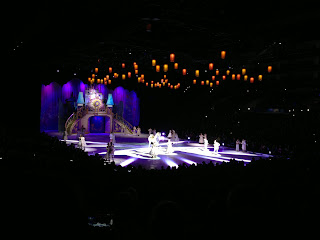 halfway through the show, the skaters scurried backstage and the lights came back on.  intermission!  you know, when all the parents (including me) run out to spend cold hard cash on overpriced snacks and crap. while lilcee took the girls for a potty break, i stood in line like the good mom i am.  and it was totally worth it, because look: 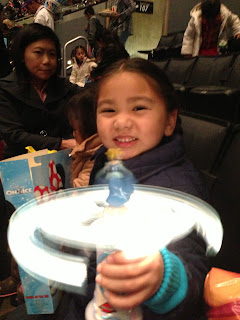 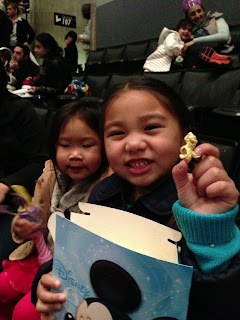 come on.  for those smiles, you would've sucked it up and bought the damn thing too.

afterwards, we walked over to nearby lawry's carvery to grab some dee-licious grub.  as usual, the girls alternated between hugging and giggling and squabbling over who got to play what game on whose iPhone. 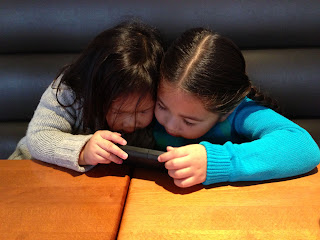 Email ThisBlogThis!Share to TwitterShare to FacebookShare to Pinterest
Labels: bean has a BFF, disney on ice