many many moons ago, before the bean was even a twinkle in my eye, i had the most fabulous beauty-related indulgence:  eyelash extensions.

i love me some full, thick lashes.  and while i haven't had them in ages, i often think about getting them again.  it's so awesome to wake up in the morning looking purty without even the tiniest smidge of makeup on.  vanity at its finest, yes?  oh, yes.  and between me and the teen (who is also rather obsessed with her eyelashes), we've tried just about every mascara out on the market.  we have our favorites, but nothing has come close to those fantastic extensions.

so when i came across a groupon deal for something new - semi-permanent mascara - i was intrigued enough to scoop it up.  it wasn't very expensive, and the deal included the initial treatment (which supposedly lasts for two weeks), a touch-up, and removal.  i figured it'd be fun to try out, and after hanging onto the groupon for a few weeks, i finally sucked it up and made an appointment to have it done.

the salon is called "her eyes" and it's in a small strip mall in nearby azusa. 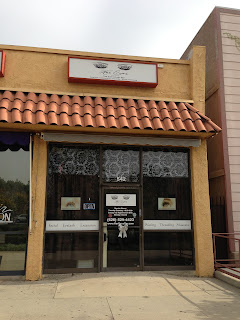 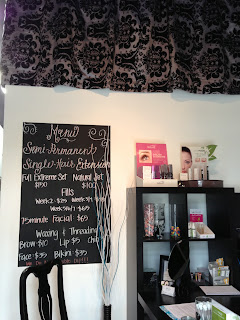 inside, i was greeted warmly by the lady sitting at the front desk - turns out she's the owner.  she explained the process to me and gave me a quick rundown on the pros and cons as gleaned from past and present clients.  basically, it's applied just like regular mascara.  it takes about a day to fully dry, and once it's dry it stays put until a lash specialist uses a special solution to remove it.  she said that the semi-permanent stuff is relatively new to the market, being just a couple of years old, and that people either love it to death or hate it with a passion.  over time, the stuff hardens - which is what the haters don't like.  interesting, yes?

maybe not.  but for lash-obsessed folks like me...hell yes!  bring it on!

i was introduced to my specialist, who led me into one of the treatment rooms. 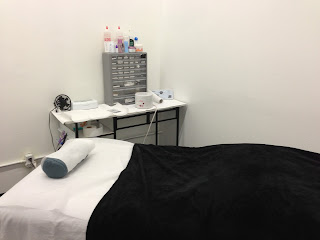 she asked me a few basic questions, like what kind of mascara i used and how i liked my lashes to look on a day-to-day basis.  then she explained the process to me again and then applied a pad soaked in under-eye treatment over my bottom lashes, using medical-grade tape to hold it in place.  she told me that she'd start me off with two coats for the first go-round, and then increase it to three or four during my maintenance appointment.

as she was finishing the second coat, she asked me if i curled my lashes (um, duh).  like, my eyes look droopy and tired when i don't.  and i probably should've thought to ask about this first, but when she said i couldn't use a curler once the stuff was applied, she added that she could do an lash perm next time.

well, hell.  i really wish she'd have offered this to me before it was too late.  i'd gladly have stayed the extra time to do the perm and ensure my fabulousness for the next two weeks.  bah!  oh, well.  it only took about ten minutes and then it was all done.

what's that you say?  a before and after, you want to see?  well now, of course i can provide that.  i made her take pictures for me.  heh. 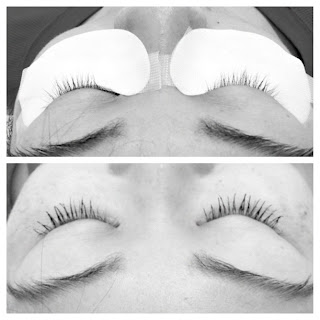 so it's now been almost a week since i had this done, and i'm not gonna lie - i kind of wish i'd have just gone for the extensions instead of this stuff.  these lashes are so freaking rock hard, i'm afraid i'm gonna poke one of the bean's eyes out if i try to give her butterfly kisses.  and despite my extreme caution when i went to sleep that night, laying flat on my back and not rolling to the side or onto my front once all night long, the lashes seem to have gotten a little tangled up together and clumpy-ish looking.  the teen assures me that they look great and not to worry, and when i look in the mirror i suppose it really isn't all that bad.  i'm always my own worst critic.

but before i left the salon that day, i made sure to tell them to work in that eyelash perm for the next appointment.  no way in hell do i want to walk around town with these uncurled lashes for another two weeks.