it seems like just yesterday that we were treated to this for the first time: 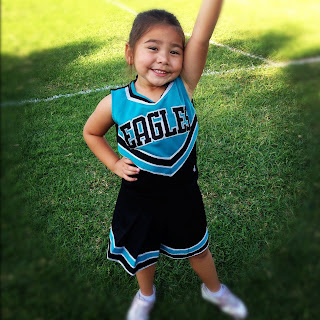 awwww, my little cheerleader.  the sight of her in that uniform never gets old.  but now that all of the sports at school for this year are over, so is cheer.  so, so sad.  they got together in uniform one last time for a portrait session - and i canNOT wait to see how those turned out - and then had an end-of-year party earlier this week.

when i asked the coach if we could bring something, she said it totally wasn't necessary but that she didn't have a dessert planned.

i shot her an e-mail to confirm how many cheerleaders there were, but being a sunday afternoon, i figured i'd better just guesstimate the number.  not everyone is a freak who checks e-mail at all hours of every day like me.  after doing a little googling for ideas, i settled on a super cute stick figure-y thing that i thought would be easier than a more elaborate design.  and i really love how they turned out: 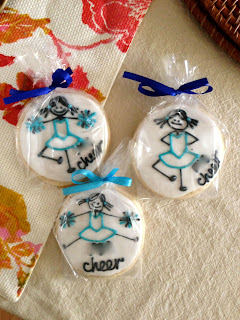 of course, as soon as i was all done baking and was knee-deep in frosting, she actually did get back to me with that number.  and of course, i was off - by 7.  poop.  i really didn't want to start all over again for a measly seven cookies, so i decided that i'd just throw in a dozen cupcakes instead. 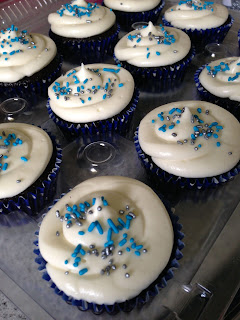 the teen came with me to deliver the goodies, and we ended up staying to watch the girls receive awards from the coaches. 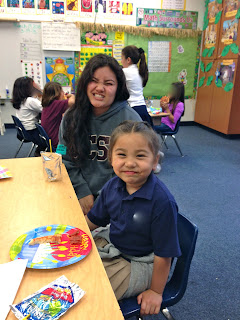 the cheer squad is divided into two groups:  the elementary girls are the "game squad," which doesn't require tryouts or participate in competitions.  to get onto the "comp squad," you have to be in grades 6-8 and be selected to join the squad after going through tryouts.  the comp girls must've had a competition coming up, because instead of joining the girls for pizza and awards, they stayed outside and practiced.

anyway, each girl on the game squad was given a purple certificate of participation.  but the bean, who's the youngest cheerleader in the group, managed to score an extra award for "most dedicated."  i may have teared up a little (which was quickly noticed and ridiculed by the teen). 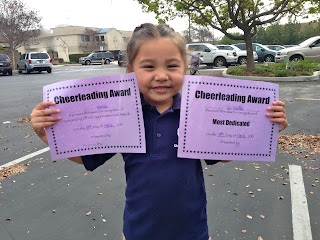 the bean is a little dejected at the notion that there's no more cheer on monday afternoons.  and i'm sad that this leaves us without a monday activity for her until august, when practices start up again.  i don't think there's anything i can put her in that's temporary, so now i get to find something else for us to do.  this should be fun.
at March 22, 2013