you guys, i'm tired.  this time change seems to get more and more difficult as i get older.  and the bean has been struggling with it this time around, too - it's been impossible to get her out of bed on time in the mornings.  ugh.

i suppose i should just be glad that we didn't have to go through this a week earlier.  because what i've dubbed as "hell week" would have been just that much more...well, hellish.  and what am i talking about exactly?  this: 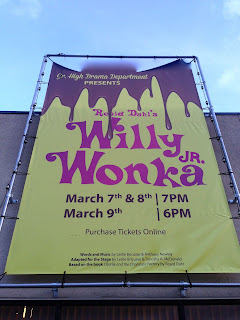 a few months ago, the bean's cheer coach sent out an e-mail to let us know that the drama department had invited the girls to be a part of this year's annual play production.  it was optional, of course, but honestly - did you really expect me to be able to resist the temptation of watching the bean up on stage as a singing, dancing oompa loompa?  pssssshhhhh.

and so since their jobs as cheerleaders were pretty much over for the year, the weekly practices consisted of dance rehearsals to learn the four little routines they'd be performing during the play.  we were given a CD so that the girls could learn the words to the songs, and i tell you, if i never hear that damn oompa loompa song again, i sure won't be sad.  it's been "oompa loompa, doompity doo" on continuous fucking loop for weeks.  good googly moogly, people.  if i wasn't hearing it in the car, it was crazy-glued in my noggin.  i couldn't escape it.

when i received the schedule for the week of the play, i kind of lost my head for a second.  i mean, this was serious freaking business:

like all good little children, the bean is usually snoring in bed by 8:15 on school nights.  i was absolutely NOT looking forward to this major disruption in the schedule.  but come monday afternoon, i dutifully packed up a bag full of snacks and drinks and a thermos full of ramen eggdrop soup, threw the bean's hair in a bun as requested, and headed back to school.  this kid has awesome locks, yes? 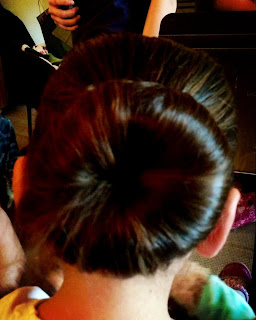 we spread out blankets on the gym floor, put out snacks, and got comfy as we watched the director work with the junior high kids on the stage and the light board.  there were wireless microphones, countless lighting cues, and some pretty elaborate sets.  it was pretty entertaining - and long.  i learned that the bean would be on the left side of the stage, and that the oompa loompas wouldn't be appearing until the second half of the show.  she was easy to spot - front row up on stage, all the way to the left. 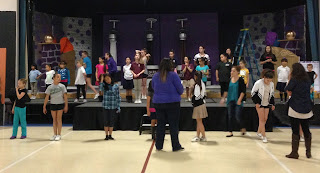 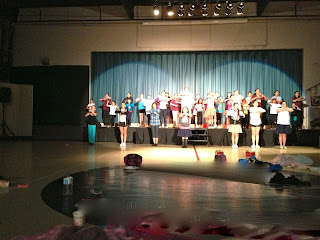 i'd managed to secure front row seats for me, the hub and the teen for opening night.  we were just to the left of center, which would give us a great view of all the action.

during this first rehearsal, the bean ended up slightly lost in the shuffle.  she was one of just two or three really little kids in the group, and they had to scurry on and off the stage really quickly with all lights turned off.  and during the first run-through, she found herself pushed and jostled about and a little lost in the dark, and ended up taking a spill on the stairs.  poor baby.  but once the girls found out what had happened, more than one volunteered to be her buddy - to make sure she didn't get trampled, and help her find her place onstage right away.  i was grateful and relieved.

full dress rehearsal was actually pretty fun.  it was really cool to see the kids all decked out in their costumes and makeup.  funny thing:  the bean is not a fan of face painting.  and so i'd prepped her days beforehand, telling her that she'd be wearing orange makeup but that it would just feel like i was putting lotion on her face.  "like sunblock, mommy?" she asked?  yes, little love.  just like that.  and when it came time to do the makeup, that frantic look flashed on her face.  luckily, i managed to calm her down as i assured her that i would take care of it and smeared a little on her hand to show her what it would look and feel like.  and a few minutes later, it was done: 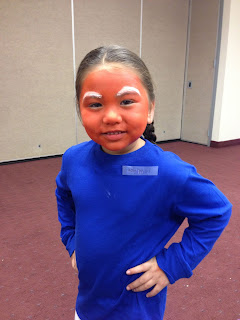 awesome, right?  once the rest of her costume was in place, she decided that this was the very best oompa loompa-like pose.  i posted this on facebook, and i don't think i've ever gotten as many "likes" for anything before. 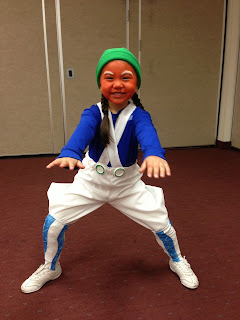 when it was all done, everyone got together for a group picture. 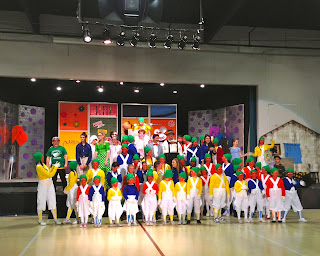 oh - and a little something extra, too.  do you know what the harlem shake is?  you will now.  the bean is the one in front in a blue shirt without the white straps:


the rest of the rehearsals went smoothly, and since she was doing really well after the snafu on that first day, i pulled her out a little early one evening so that she could go to dance class as usual.  she's going to be in a recital in june, and i didn't want her to miss any classes if we could help it.

opening night.  by now, getting her ready was pretty much second nature - single braid in the back, orange makeup, costume.  easy peasy. 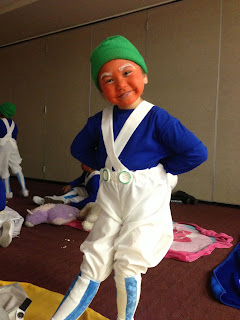 the gym was full of nervous, excited energy. 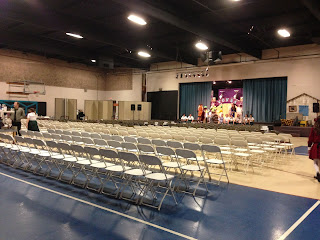 after a final group picture of the oompa loompas, i left the bean in the capable hands of the cheer coaches and went out to take my seat with the hub and the teen. 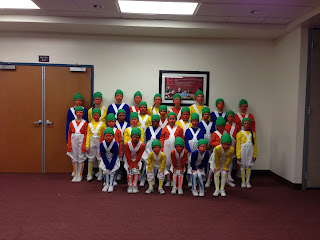 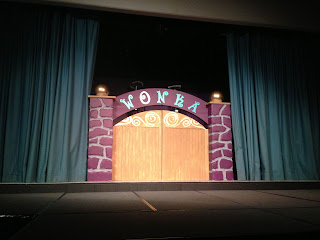 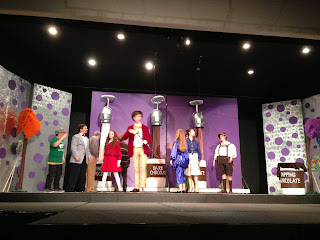 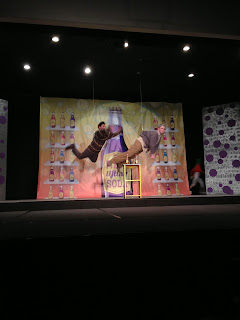 i damn near exploded with pride when my girl took the stage for the first time.  how i managed not to cry, i'll never know. 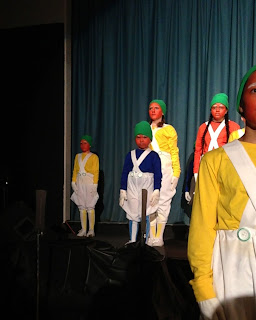 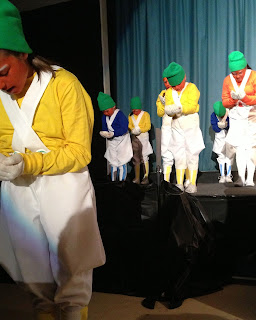 even after i'd already seen the whole thing several times over the course of the last few days, i was really, really impressed with the quality of this performance.  the entire cast did all of their own singing, never missed a cue, and when there was a snag (which is damn near unavoidable during live theater), they ad-libbed and kept the show flowing without missing a beat.  it really was a first-class production, and i enjoyed every minute of it.  i gotta admit that sitting in the front row is a little disconcerting, though.  i always feel a little awkward making eye contact with and being in the line of vision of performers, but i guess that's a small price to pay for the privilege of being right in front.

watching the bean scurry out with the rest of the cast for a bow was hilarious.  while she knew what she was supposed to be doing, she looked a little disconcerted at the sight of the sold-out audience and all that applause.  she took her bow and stood there for a few seconds as everyone scrambled to take their places off to the side, and i somehow managed to catch this shot: 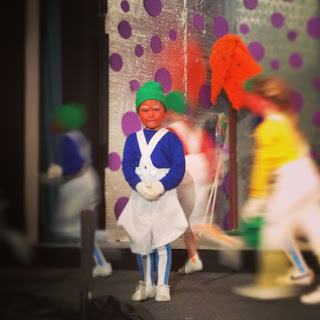 that orange face.  it's just so funny. 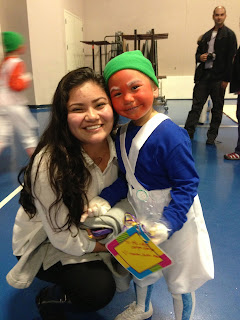 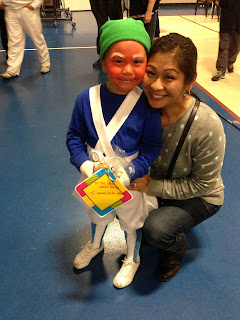 one of the kids' moms works for neutrogena, and she brought cases of their awesome makeup remover wipes.  i can't tell you how grateful i was, since i was able to get all that orange stuff off of her face in no time.

the next morning, she said "mommy, look!  the program looks just like my drink!"  indeed. 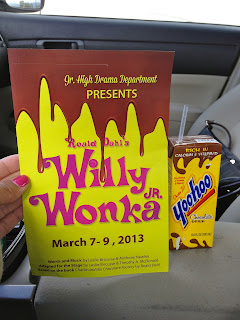 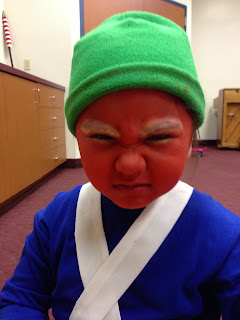 that's a wrap, folks.  does that apply for plays, or just movies?  whatever.  you get it. 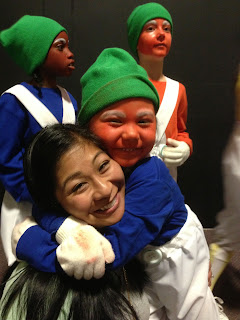 next up:  a cheer performance for the parents in a couple of weeks.  after that, it's the annual gymnastics showcase in may (on the same day as the teen's baccalaureate and mini cee's birthday party - oy vey) and then her dance recital in june.

Email ThisBlogThis!Share to TwitterShare to FacebookShare to Pinterest
Labels: oompa loompa, the bean is a drama queen