so after two weeks straight of attending "american idol" tapings, i figured i was pretty much done for this year.  after all, they were down to the final two contestants of the season.  but then i got an e-mail from my friend katelin, who'd learned that she had some extra tickets for both nights of the 2-part finale extravaganza.

you know what happened next, i'm sure.

here's my date for the first night: 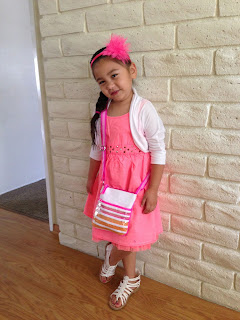 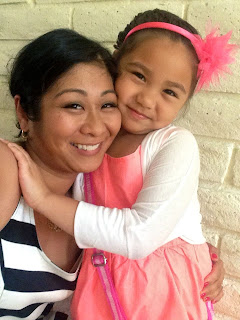 do you love the ensemble?  she picked it all out herself, and was excited to carry her own purse.  she scurried into her room just before it was time to go and stuffed it full of necessities. 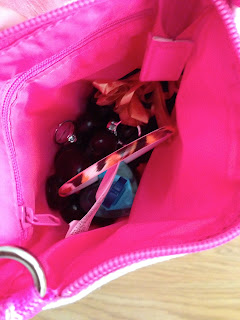 after all, a girl's gotta accessorize, right?

the AI finale is always a bigger deal than the weekly live shows.  instead of the small CBS studio i'd been to before, these shows were being broadcast live from the nokia theater at l.a. live in downtown l.a.  this actually worked out better for me, being just a bit closer to home. 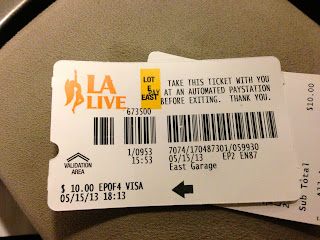 based on my experience at the other tapings and being a rule-follower in general, i was a good girl and left my phone in the car.  i always hate being phone-less - it's like missing a limb - but i didn't want to risk having to check it in with security and stand in a stupid long line after the show to retrieve it.  but security was most definitely much less strict here.  they did glance inside my purse, have us walk through a metal detector thingy, and then as our tickets were scanned the attendant halfheartedly told me to be sure to turn in my cell phone if i had one.

well, even if i did have one, no one was checking for it.  had my phone been in my purse, it could have easily stayed in there as we breezed right past on our way to the escalator to the loge section.  i may have filed this information away for future reference.

as we sat down, i thought it would be a good idea to let the bean know what to expect during the show.  i made sure to take her to the restroom first, too, just in case.  and when the screaming and cheering began, her eyes grew as big as saucers and she clapped both hands over her ears.  awwww, poor little delicate flower.  pssshhhh.  she got over it as the lights and music and excitement began, and forgot how much she hates loudness as she danced along.

i was also pretty relieved to find that unlike the previous shows that had lasted for two hours, this was only a 60-minute program.  the timing couldn't have been better, since it was still a school night, after all.

i found out later that rob schneider was in the audience, and because he's apparently a VIP, was allowed to bring his phone inside.  i swiped this from his twitter feed: 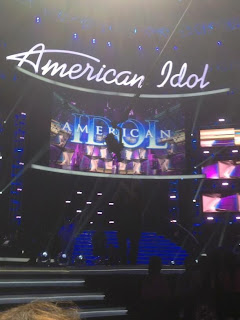 along with kree and candice, the final two, we were treated to a live performance by carly rae jepsen - or, as i explained it to my date, the "call me maybe" girl.  she came onstage in a bright yellow jacket and sang a song that had apparently been assembled via her adoring fans, who voted on lyrics via coca-cola's "perfect harmony" program. 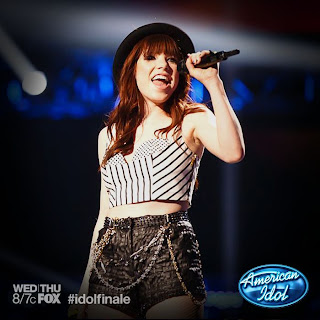 i cracked up when she turned to me later in the show and said "i already voted, mommy."  i was all, "huh?  what are you talking about?"  she sat back and said "yeah, i voted for the girl in the yellow top.  does she get a trophy?  do we get to see her get it?"  funny girl.

when the show was over, i decided it would be easier for us to just get home and grab something for dinner instead of sitting down somewhere and lingering downtown.  on our way, i caught sight of this crazy long line just outside the theater we'd just exited. 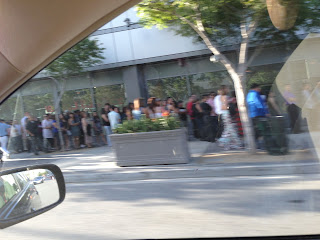 i'd heard people saying something about mariah carey as we scampered past them on our way back to the car, but i didn't really pay attention.  i just wanted to get the hell outta dodge.

disclaimer:  “I attended this event as a guest of AT&T, and was in no way compensated. All opinions are my own.
at May 20, 2013