ever done a wall sit?  you know, where you lean up against a wall and then squat down as if you're sitting down...except that there's no chair?

up until this month, i totally struggled with holding that position for anything longer than - oh, maybe 20 seconds or so.  and then my friend dailygluttony shared a photo of something interesting: 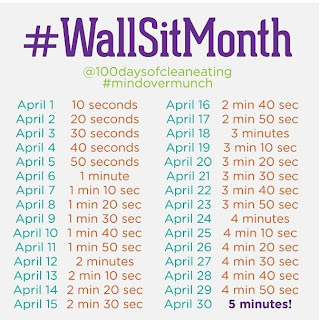 now, i didn't actually see this until well into april.  i ended up jumping into it on april 9th, which as you can see from this chart meant that i had to hold myself up for a minute and a half right off the bat.  i was pretty nervous about it until i realized a couple of things:  1.  that's really not a long time, and 2. i'd gotten a lot stronger with the running and jillian michaels workout videos.  when i thought about it, i hadn't actually done a wall sit in forever.

for march, the challenge had been this: 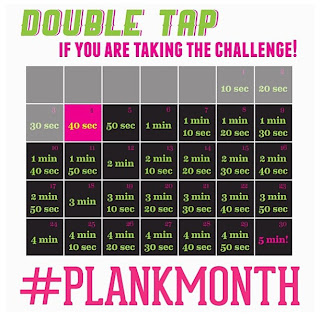 i had wanted to take part in this one too, but had forgotten all about it.  and when i compared the two charts, i noticed that the times and dates matched perfectly.  and so after i did my first wall sit, i decided to throw in the plank, too.  about 30 seconds into that first day, i came to the sad realization that my upper body and core are most definitely not as strong as my legs are.  the planks KILLED me.

DG and i (and a couple of other friends, too) checked in with each other periodically over the last month, commiserating over the difficulty of adding yet another ten seconds to each day.  i tried to rope the hub into joining me too, and he did it a few times before deciding it was way more fun to cheer me on as i panted and grunted my way through each night's session.  going off of DG's tip to watch youtube videos on my phone, i spent my month viewing all sorts of different nail art and hairstyle tutorials.  worked like a charm - i was fully entertained and learned a few fun things along the way.

last night, not long after DG triumphantly posted that her wall sit challenge was complete, i tackled mine.  i'm quite proud of myself for being able to say that I DID IT! 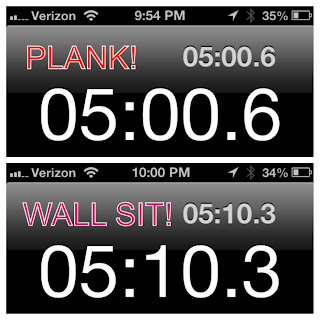 but today starts a new month.  what's the new challenge, you ask?  well, after checking in with DG, she pointed the way: 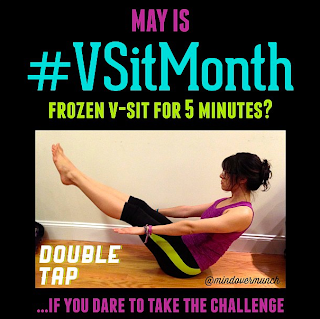 holy hell.  kill me now.  although i never thought i could do the plank or wall sit for five minutes straight, so i suppose the v-sit is possible too.