"is this LIVE on the east coast?"

so, remember the karaoke/american idol viewing party i got to attend a while back?  well, it led to something even better: 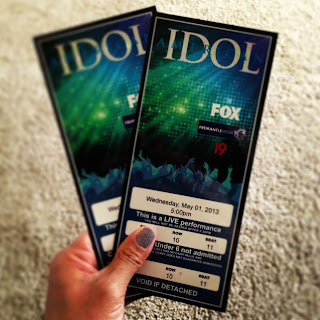 yup, my new friend katelin came through and fedexed me those tickets just in time to head down to cbs studios to watch a live taping of american idol.  the teen was pretty excited too, although she admittedly isn't a huge fan of the show.  we've watched it together on and off over the years, and hey - it only took till season 12 for me to worm my way into the show.

because the show is aired live for our friends on the other coast, we had to have our asses firmly planted into our seats by 4:30 in the afternoon.  as soon as the hub got home to hang out with the bean, we were out the door.  on our way to hollywood, we made two quick pitstops - one for food and another so that i could make this: 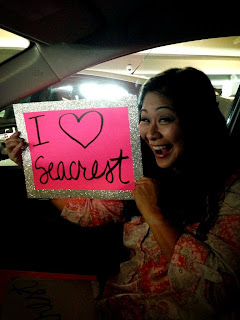 the biggest bummer was that cameras and cell phones aren't allowed into the studio.  you have NO idea how much this was killing me.  well, actually...yeah, you probably do.  anyway, we parked at the grove as instructed and walked the short distance around the corner to cbs television city (collecting some free shampoo samples along the way from a demo going on at the grove that afternoon).  we stood in a fairly long line in the hot sun for awhile and then were finally granted access into the cool, dark studio.

when you see the show on tv, that studio looks ginormous, doesn't it?  but in real life...not so much.  the stage does take up a majority of the room, and then you have the famous table for the four judges, and then a relatively small audience area.  i'm not the greatest judge of numbers here, but there were maybe 200 seats in there?  pretty awesome, and provided a fantastic view regardless of where you were assigned.  as for us, we were off to the right side and probably about 10 rows from the bottom.  we were a couple of happy campers.

the warm-up dude was cheesy and silly, which is what you'd expect from a warm-up dude.  he brought people up on stage to do beyonce's "single ladies" dance and rewarded the winner with certificates for sandwiches from jersey mike's.  he attempted to dance along, which was kinda uncomfortable to watch, and cracked silly jokes and got the crowd all riled up.  basically, he did his job.

we were pretty amused to note that most of the folks seated around us were rather, uh, elderly.  like, when the first performer was doing her thang down on the stage i looked over and the man across the aisle from me was hunched over and taking a serious siesta.  it was comical.  and just before we went on the air, the teen and i watched another older gentleman behind us wave down one of the production assistants and whisper very loudly "is this live on the east coast?"  heh.  as for recognizable folks in the audience, we had babyface, mary murphy from "so you think you can dance," harry connick jr., haley rhinehart from AI season 10, and mariah carey's mama.

it was also interesting to note that the friends/family members for each contestant are basically shuffled in and out of the same seats when their loved one is on.  there's a camera focused on them during the entire performance, and then they're moved somewhere else so that the next group can sit and watch their person.

as for my sign?  well, it was rather glow-in-the-dark.  and pretty darn sparkly, if i do say so myself.  but i was a little shy about holding it up - mostly because i didn't want to block the view of anyone who was unfortunate enough to be seated behind me.  i'm considerate, yo.  i really really wanted some sort of acknowledgment from my lovah seacrest, but it was not to be.  however, when the teen and i watched the show on the DVR the next day, i was rather gratified to see this: 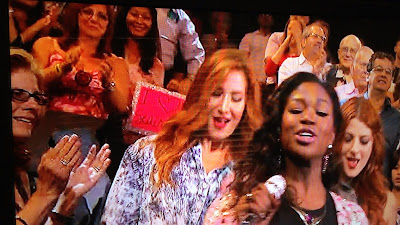 disclaimer:  “I attended this event as a guest of AT&T, and was in no way compensated. All opinions are my own.
at May 06, 2013