to cap off an pretty epic week, the hub and i left the teen and the bean in the very capable and loving hands of their grandma for a two-night getaway at the fabulous ojai valley inn and spa.  he'd been invited by one of his clients to join them for a weekend of networking, hobnobbing, and partying with a bunch of his colleagues and peers.  and although i'm not the best corporate wife that ever was, i'm always happy to partake in the spoils of his labor.

as we hopped onto the freeway and headed north, he casually gestured towards the backseat:  "i got you something," he said.  a present?  for me?  woohoo!  and when i opened the box, this is what i pulled out: 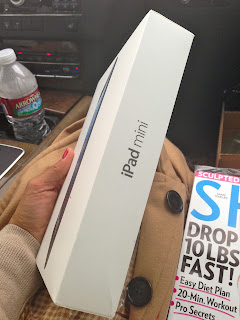 um, YAY!  turns out that yet another client of his had gifted him with this, which he'd then planned on giving to me.  and then i had to laugh because of a conversation we'd had earlier in the week.  see, i've been wanting one of these things for awhile now.  my old 1st generation iPad is - well, old.  it's a brick, super slow, and just not the high-tech piece of equipment it was when i first got it almost three years ago.  technology moves fast, yo.  and with a tip from one of my twirlie friends, i'd learned that target not only price matches but that the 5% discount using their red card applies to electronics purchases.  she'd found the iPad mini that i was lusting after on walmart's website on sale, brought proof to her local target, and used her red card PLUS a 5% coupon she'd scored through pharmacy purchases.  and she very generously fedexed me her extra coupon so that i could do the same.

except that when i brought it up with the hub, i got a very firm "no, you don't need that.  i'll just give you my iPad, i never use it anyway."  big fat lie.  but hey, a new toy wasn't worth an argument, and so i dropped it.  see why i thought it was so funny?  clearly, he knew this was already on its way when i so casually announced that i was going to go out and spend my hard-earned money on one.  such a happy coinky-dink.

the drive up to ojai was lovely.  i jokingly told the hub that all i really knew about ojai was that it's where the bionic woman lived, and was met with a blank stare.  pffffft.  "the six million dollar man?  you never watched that when you were little?"  another blank stare.  well, hell.  i gave up.

with a bazillion traffic alerts coming up on the navigation system, we took a different, more scenic route that wound through some sleepy little towns and around a back way that i'd never seen before.  it was really pretty, and we came across this beautiful-looking campus for a school neither of us had heard of. 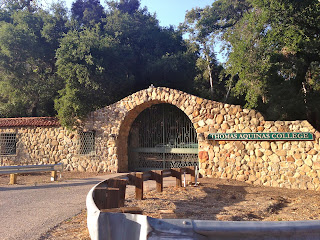 alas, the entrance was gated, preventing us from being looky-loos and checking out the grounds.  oh well.

it didn't take too long before we finally arrived at our final destination. 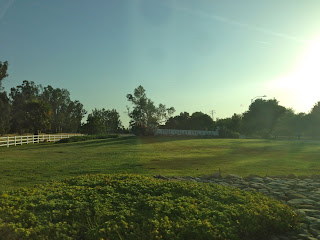 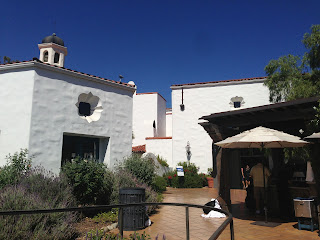 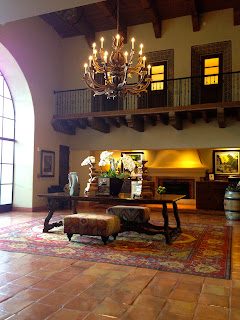 before we learned that the resort is very dog-friendly, we kind of snickered at the sight of this hotel guest. 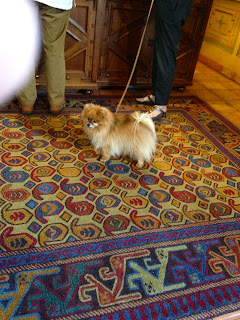 we got to ride to our room on this: 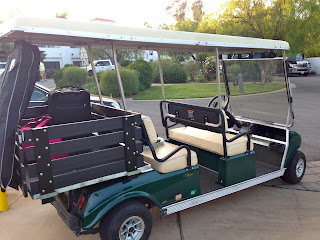 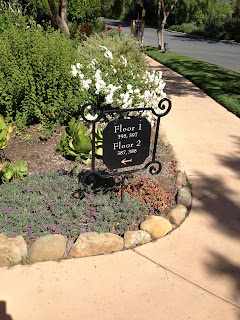 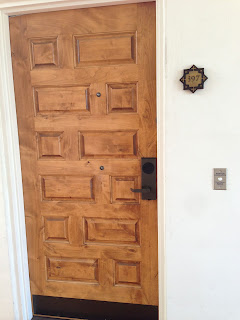 the room was pretty awesome. 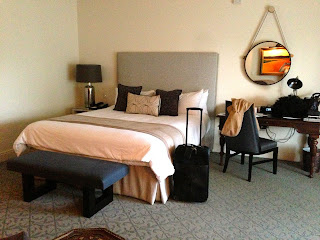 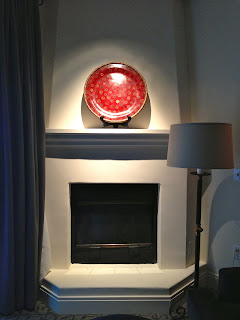 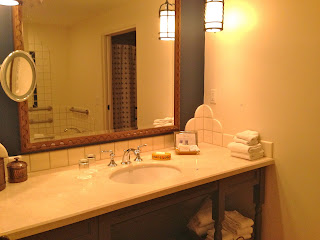 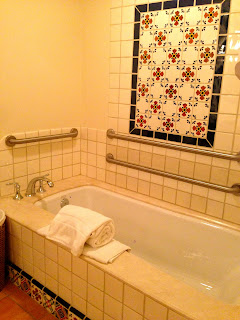 did you notice something a little different about that tub?  yup: 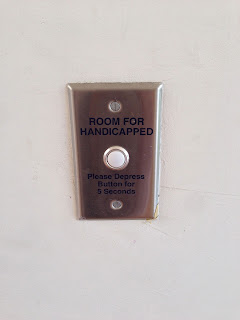 plus, there were snacks waiting for us. 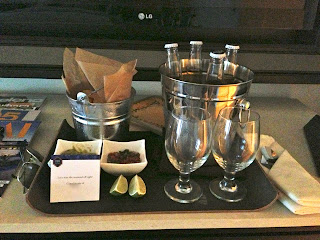 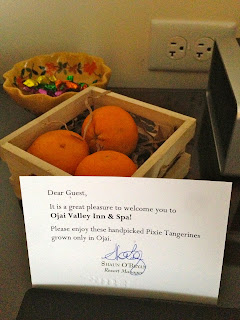 but as it turned out, we'd arrived just in time to join our group for cocktail hour and a welcome dinner at the herb garden pool area.  and as luck would have it, our room was situated directly across from the entrance.  sah-weet.  noting the attire of other folks walking past us, the hub threw on a jacket and i switched into my cute and comfy toms wedges.

it was a nice evening:  perfect weather, free-flowing drinks (well, that part was great for other people), friendly faces.  having worked in the same industry as the hub in years past, i wondered whether i'd see anyone i recognized.  we managed to get through almost the entire cocktail hour, and then as i turned my head, i spied a very familiar profile - one of my former bosses.  yaaaaay.

so anyway, yeah.  dinner was delicious, the people we sat with were all really fun to talk to, and then we quietly made our way outta there and back up to our room.  turndown service rocks. 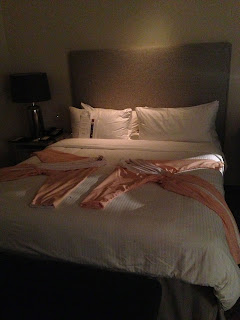