i was pretty excited for the rock & roll half - especially since i wasn't exactly running the entire thing.  my buddy kelley contacted me not too long ago with the news that there was a 2-person relay option for this thing, splitting the distance into 6 and 7-mile legs.

she didn't have to ask me twice. after a little maneuvering, i managed to get myself down to san diego and over to the start line. this madness was the crazy long lines for the rows and rows of port-potties. 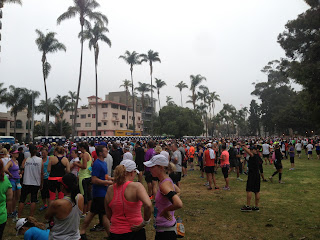 if you'd spent some cash on brooks merchandise in the days leading up to the race, you got access to special VIP potties. i didn't, by the way. 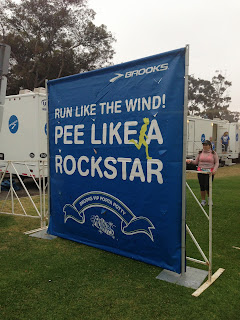 UPS trucks were lined up too, serving as the drop off spots for gear check. i'm always too lazy to deal with this crap, though. and there's really nothing i need after the race that i can't fit into my armband anyway. 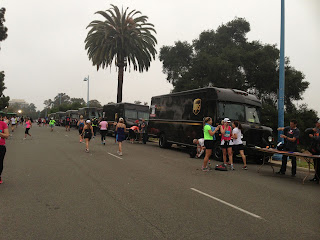 at the end of the last corral (something like #25 or some shit) was the official sweeper van. you never want to fall behind this thing. 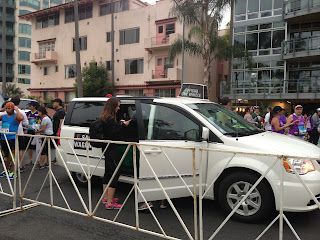 our obligatory pre-race shot. yes, i am wearing a superhero cape and a wonder woman tutu. such an idiot. there weren't many costumes out on this course, so i felt extra lame. 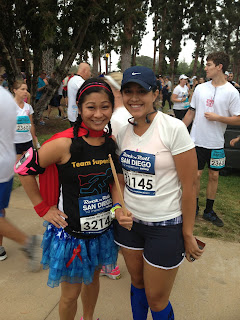 i left kelley to wait for her corral to be released while i made my way towards the start line and the shuttle that would take me to the relay transition zone, about halfway through the course. 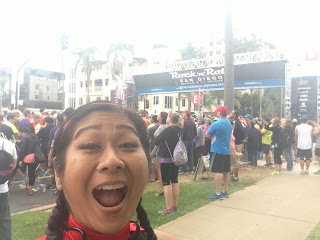 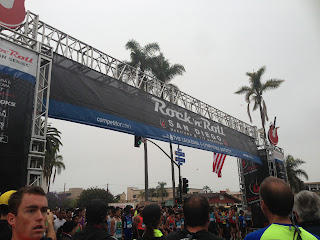 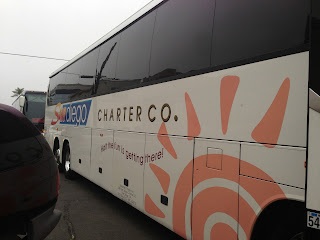 an upside-down close up of my tutu. 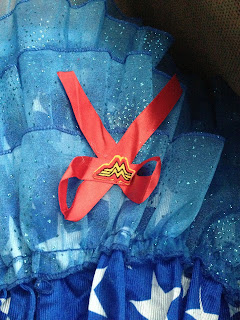 after what seemed like a really long bus ride, i finally found myself here. it was about half an hour into the race and as i got to this spot, the first few runners were already coming through. did you catch that? six miles in half an hour. that is FAST, yo. 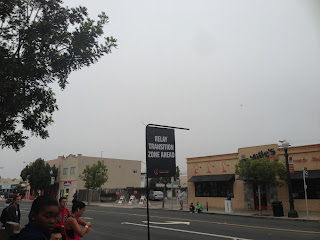 a couple of minutes later, this truck came down the road, getting the spectators nice and riled up for the group of six runners who were clustered together in their quest to be the first female to finish. 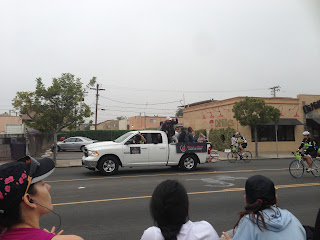 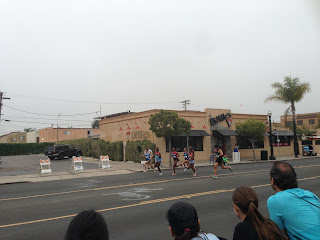 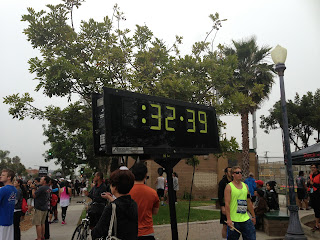 as i watched and waited, i noticed a handful of others who'd dressed up. 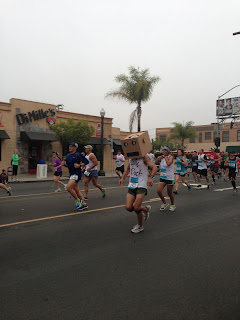 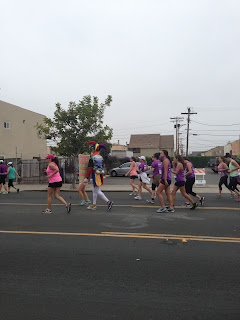 these folks were plugging along with huge backpacks on. doing a half marathon is hard enough without this extra weight. 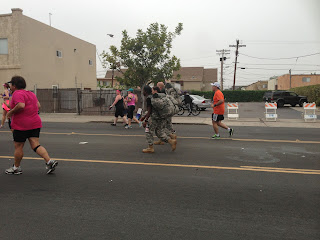 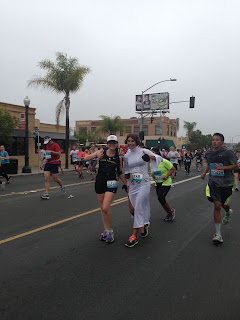 and then the announcer alerted me to the  fact that my partner in crime was making her way to the transition zone. she handed off the baton/drumstick, and i was on my way. 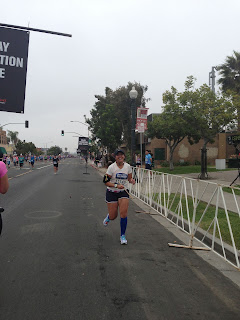 a couple of miles in, my course joined up with the full marathon runners. i totally felt like a fraud as I scampered along, fresh and breezy after just twoish miles while they were somewhere around 22 in. i may have spotted a few people puking on the side of the road, too. yet another thing that cements my "never EVER doing a full" stance. 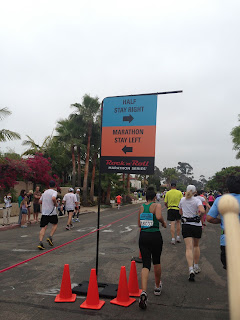 more than halfway through my seven-mile stretch! 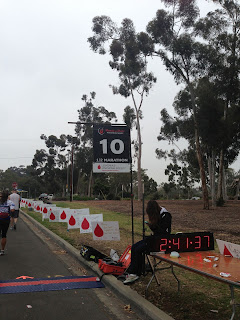 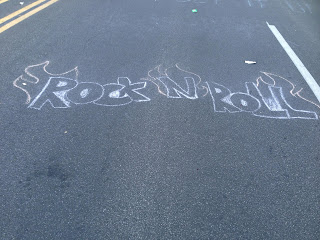 although i knew better, i pretended this sign was for me as i grinned my fool head off and fist-pumped past it. 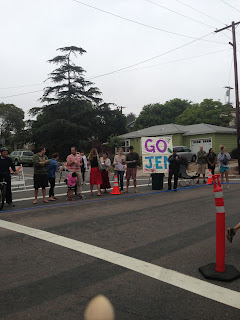 also, i figured that as long as i was ahead of this dude, i was in fairly decent shape. 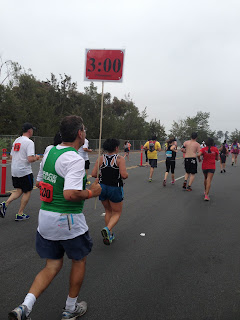 almost at the finish. i got nothing but respect for this runner. 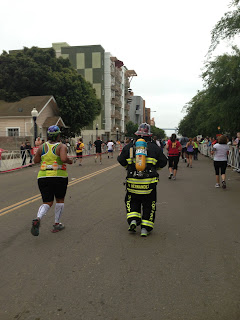 when i spotted the finish line looming near, that familiar and fabulous rush of adrenaline hit and i picked up the pace on the downhill stretch to finish this shit strong. i caught a glimpse of FIL waving at me and MIL tossing a lei in my direction as i sped past. sadly, i couldn't stop to pick it up and i tossed a wistful glance back at it as it fell to the ground. 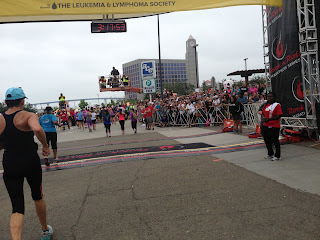 the bean was there too, perched in her daddy's shoulders. 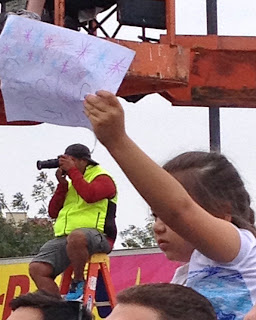 the triumphant "after" shot. 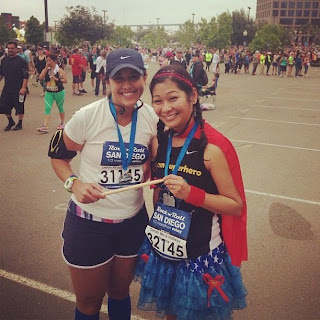 i really enjoyed this relay thing. i didn't have to do much training for it aside from my usual thrice-weekly runs, and seven miles is completely doable for me. plus, it was kinda cool to do it as a team with one of my favorite running buddies. i hope we get another chance to do something like this again.
at June 17, 2013

Email ThisBlogThis!Share to TwitterShare to FacebookShare to Pinterest
Labels: chillin' in san diego, running my ass off