so on MIL's birthday, we hopped in the car and escaped the impending heat with a quickie trip down to san diego.  as part of team superhero, i had volunteered to take a shift at our booth at the rock & roll half marathon expo.  we've got the inaugural costume party run coming up next month, and race expos are a great way to get people interested and registered.

traffic on the way down didn't stop the hub from getting me to the convention center on time.  except that the navigation directed him around to the back entrance, where a crazy set of steep ass stairs waited for me to ascend. 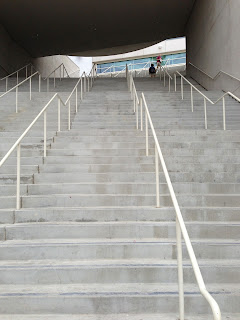 it took me a few minutes to figure out where i needed to be, but with the help of other folks who were trying to get to the expo to pick up their race bibs, i managed to find it at last. 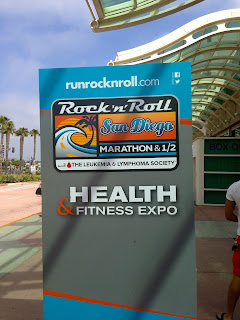 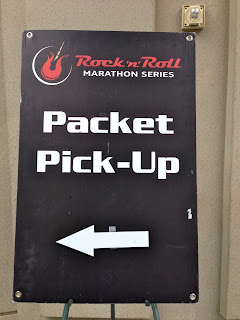 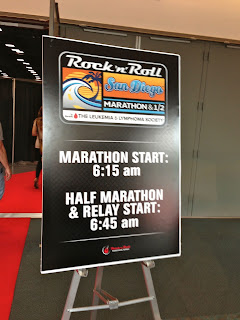 because i was running a few minutes late, i didn't stop to pick up my own race packet.  instead, i snaked my way through the crowds and headed right over to the superhero events booth (which was no easy feat, let me tell you).  i said hello to ken and sabrina and was happy to meet other members of the team that i'd only ever interacted with on facebook.  we had a great time mingling with expo attendees, showing off the crazy giant half marathon medal (it's the largest in the world, people!), and just having a great time. 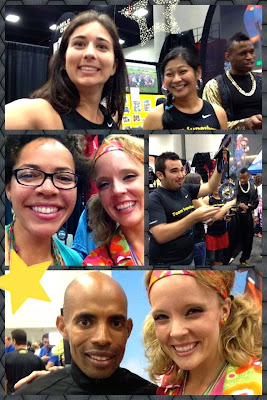 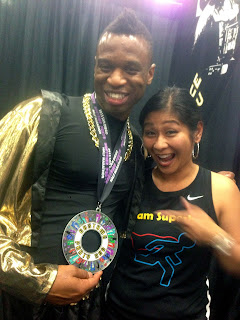 that medal is as big as one of those old 45 records (remember those?  no?  huh) and sports a mini disco ball right in the middle.  the one we were demoing had been touched and fondled and admired by so many people that the disco ball eventually fell out, though.  boo.

if you happen to be in the san diego area on july 7th and want to join in the fun, let me know and i can hook you up with a sweet discount code.  costumes aren't a requirement - but wearing one will make those 13.1 miles go a lot faster!  maybe.  i don't know.  i'm still slow as all hell, but i sure have a great time doing it when i'm in a fun getup.

my 2-hour shift was over in a flash, and then i finally got to pick up my bib and goody bag. 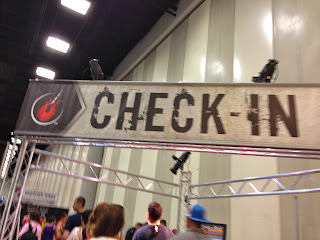 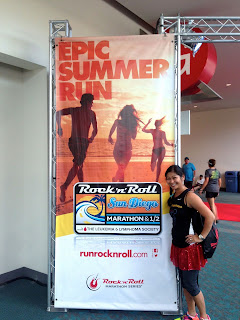 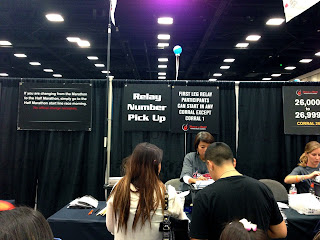 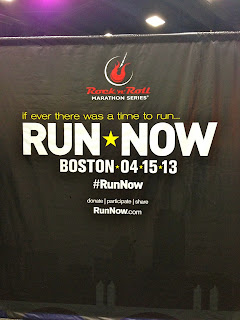 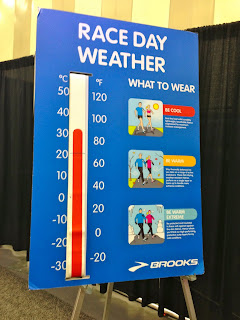 i walked through the majority of the expo, picking up new socks, registering for another run later this year, and scooping up a nice sample of granola. 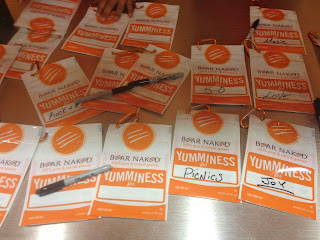 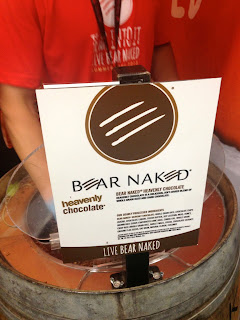 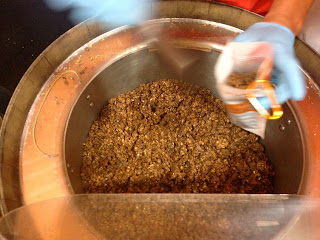 i called the hub to see what they were up to, and was glad to hear that they'd enjoyed a fabulous mexican lunch at the place i'd first tried after the diva dash a couple of months ago.  since they were still a good distance away, i decided to wander through the nearby gaslamp district. 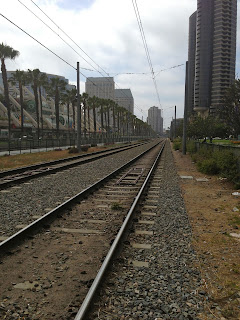 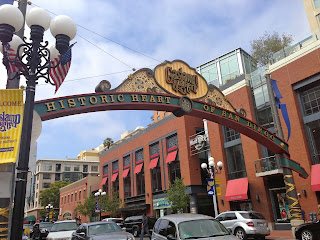 not finding anything i really wanted to spend money on (shocking!), i decided to check out the location of our home for the night, the hotel solamar.  and whaddaya know...i was literally standing right around the corner from it. 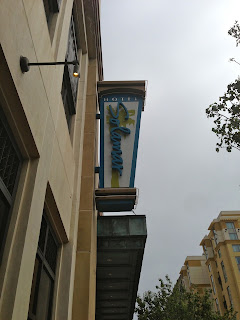 i thought it was a pretty nice little hotel.  our room was spacious and comfy, with a view of the pool just below us. 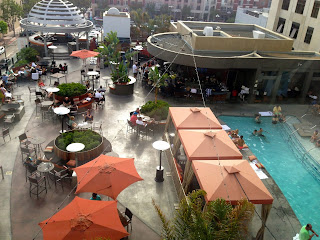 we even had these: 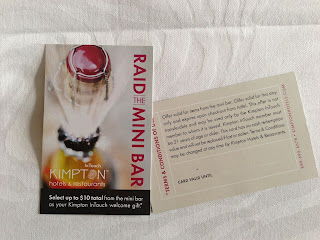 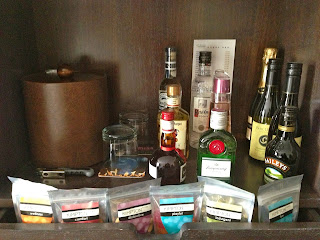 and on the bulletin board, prints of photos i'd sent to the concierge.  i'd received an e-mail that asked me to send pictures of loved ones left at home, so i picked out one for our room and one for the ILs.  too bad the concierge effed up and put them both in ours. 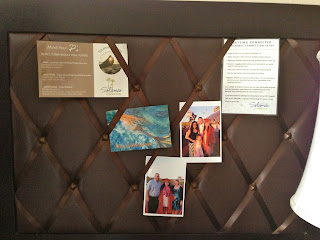 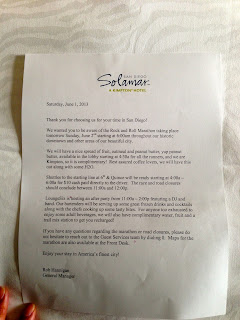 there was a king bed and a rollaway, which sent the bean over the moon.  "i get my OWN bed?  cool!" 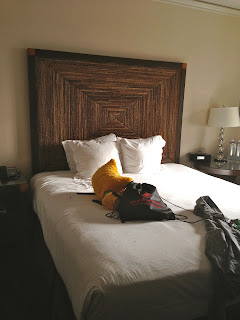 the kimpton hotel chain must be cracking down on the ol' toiletry budget, because the shower featured this: 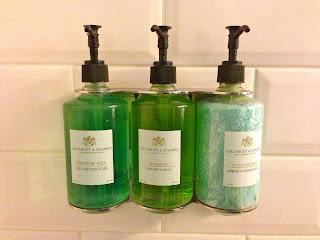 and in the closet, this stuff. 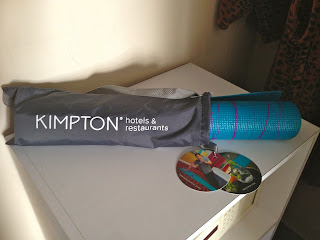 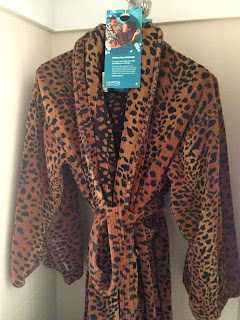 when i was done inspecting every nook and cranny of our room, i shifted my focus to the stuff i'd picked up at the expo. 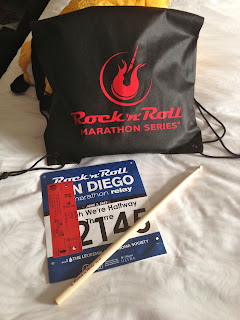 another race, another hotel stay.  what can i say?  it's become a way of life.

Email ThisBlogThis!Share to TwitterShare to FacebookShare to Pinterest
Labels: chillin' in san diego, running my ass off