because i seem to be on a mission to earn at least one race medal per month, i dragged my ass outta bed at a stupidly early hour to head out and run the pasadena 5K.  i did this race last year with my friend kelley, although we'd chosen the 10K - which i've since decided is my most hated distance to run.  i don't know why, it just sucks ass.  so i guess with me it's either 3 miles or 13.  weird, huh?

and because the bean can't seem to get enough of her BFF, she'd taken lilcee up on her offer to wake up early and meet us in pasadena to take her home and play with mini cee while i ran.

after they were gone, i managed to find a decent parking spot on a residential sidestreet not too far away from the start line.  i'd considered attempting to find parking in the pasadena city college structure, but the road closures kept me from getting anywhere near it.  plus i had to hit the potty, like pronto.  lucky for me, there was a starbucks along the way with a nice, clean restroom.  thank goodness. 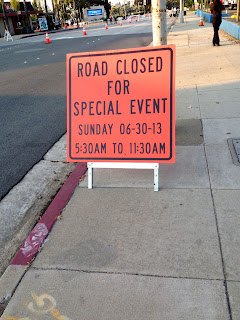 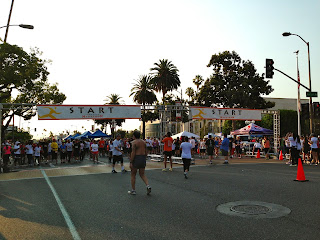 i always think it's weird when they set up the course so that you're facing the finish line when you start. whatever.  and it was as i joined the growing crowd that i realized i'd forgotten my damn headphones, which i'd been so mindful of charging the night before.  ugh.  i hate running without music. 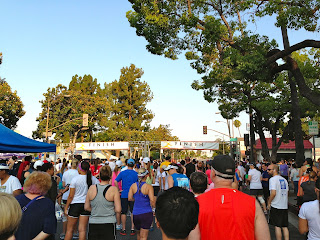 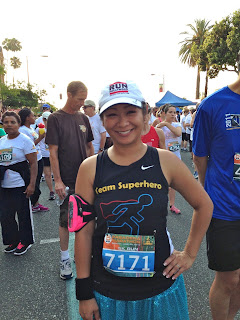 because the half marathoners (who had a start time an hour earlier than we did) ended up starting about fifteen minutes late, the 5K/10K race got off to a late start as well.  it kinda sucked, because the weather people were forecasting a mighty hot day and at 7am, it was already hovering over the 80-degree mark.  this was kind of a big deal for me, since i usually make it a point to start my runs during the hot summer months nice and early to avoid the heat.  i'm not a fan of running when it gets any warmer than 75, and even that's too much.  bah.

we finally got going somewhere around 7:20, and sure enough - it was pretty stinking warm.  it was a different course from the previous year's, which was nice.  the course took us west along colorado boulevard - just like the route for the annual rose parade - and before i reached the first mile marker the rhythmic sound of live drums helped keep my legs going. 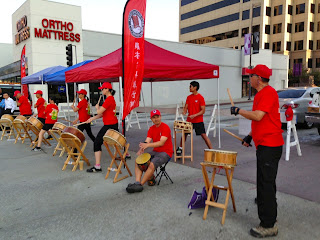 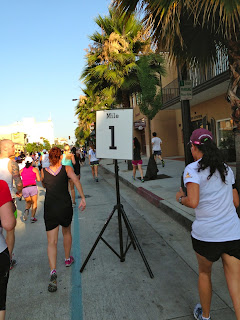 we turned up garfield avenue and ran past one of my favorite pasadena landmarks, city hall. 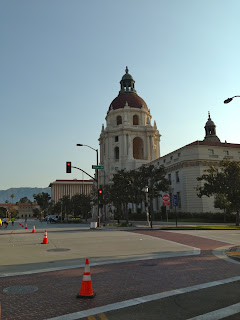 there was plenty of signage to keep everyone safe. 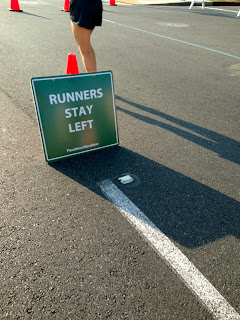 according to my nike+ app, the course was a little longer than 5K - 3.4 miles, to be exact.  i'd like to say that the heat really affected my time, but i've come to terms with the fact that i'm just not as fast as i was when i first started running.  i don't care.  i still finished, and snagged my medal. 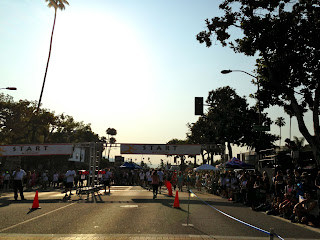 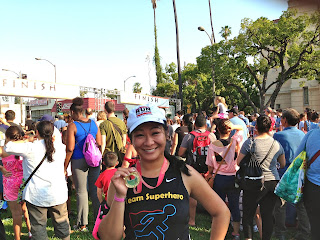 the volunteers were still working on unpacking and unwrapping the medals, and by the looks of this table you wouldn't have guessed that they'd actually run out of hardware before the last runner crossed the finish line.  it really sucks that they did, especially for those half marathoners who were out running in blistering heat. 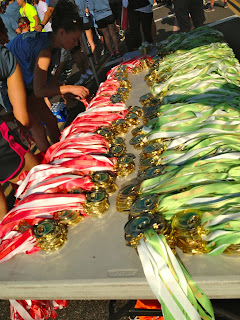 through the magic of facebook, i knew that my friend spinny was out running this 5K too, but because there were so many people out there i didn't really think we'd find each other.  yet as i stood there chugging warm bottled water and trying to cool down, i spied her accepting her medal as she finished her run. 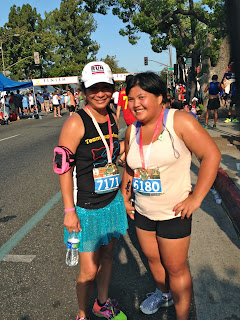 a few minutes later we were approached by a reporter from the local NBC news crew.  he wanted to ask some questions about how the heat affected our participation in that morning's race, and i was more than happy to chat as spinny backed away slowly.  ha!  but she had the presence of mind to pull out her phone and snap a couple of pictures of me and the reporter. 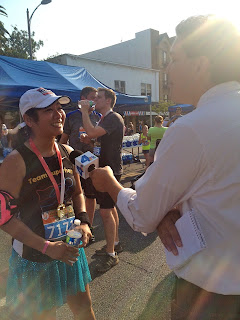 on my way back to the car, i got a text from lilcee telling me that she and the girls were off having brunch.  so i did what came naturally - i stopped at that starbucks again and grabbed something to drink.  it's not a good morning until i've had my iced caramel macchiato, people. 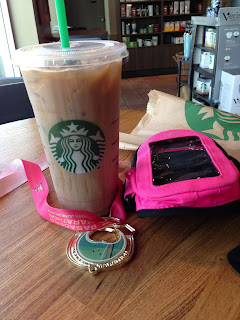 this was the first thing i laid eyes on when i got into the pri-YES.  hmph. 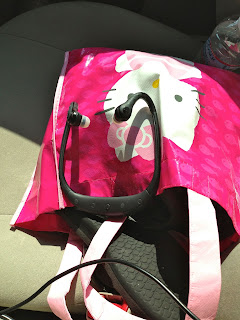 back at lilcee's, the bean was rocking a tiara and dropped into a curtsy as i walked in.  silly girl. 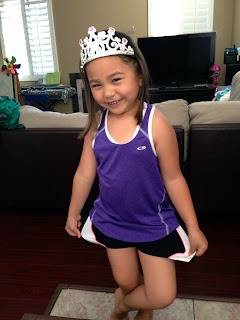 that early morning wake-up hit her hard as we hit the road and headed home.  i turned around not long after we got on the freeway and found her like this: 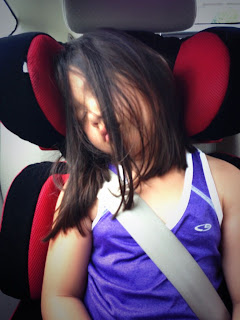 later that afternoon, i was tipped off by one of my facebook friends to check out the news.  sure enough: 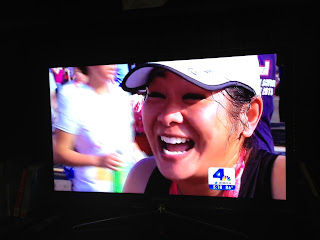 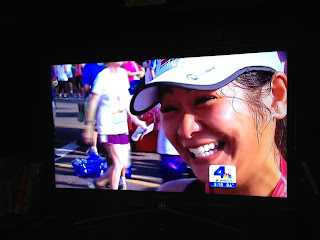 Email ThisBlogThis!Share to TwitterShare to FacebookShare to Pinterest
Labels: old town pasadena, running my ass off