we all know how much i love me some boybands, right?  especially throwback ones from, like, the 90s or so.  and armed with this knowledge, i'm sure it will come as absolutely no surprise to you when i tell you how freaking excited i was when i heard about...

the best dang tour title in the whole wide world... 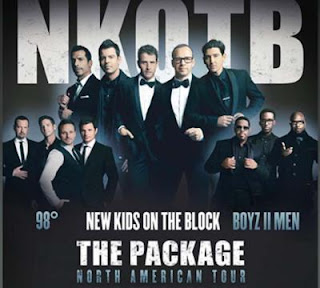 now, i must confess that while i sang along to and shook my booty to the new kids' music back in the day just like any other red-blooded american female, i was never really that big a fan.  i think i bought one of their albums and that was about it.  i didn't fangirl over them all that much, but they were a'ight, you know?  so it's even more amusing that i've now seen them live two summers in a row.  although the big draw for me last year was the latter part of the NKOTBSB tour.  i looooove me some backstreet boys.

speaking of which, they're doing a free concert at the grove next week.  that's kind of sad.  doesn't mean i don't want to go, but i don't know anyone who's free (or willing) to go with me.  sadness.

but when news of this here package tour broke early this year, that gmail was smokin' from the frenzied emails back and forth between me and a group of my fellow boyband fangirls.  the moment that presale went live, nanette was on it - and at that time, she was due to deliver baby mimi at any minute.  we were all super grateful to her for securing those tickets for us, because this was a show not to be missed.

i was suuuuuuuper pissed when i realized halfway to lilcee's house that i'd forgotten to toss the point-and-shoot camera into my bag.  being able to take halfway decent photos at concerts was part of the reason i was so excited to have the new toy - such a fail.  so i had to settle for taking pictures with my phone, which sucked.  granted, my iPhone generally comes through with decent shots, but not when it comes to concerts.  oh well.

nanette had gotten us a pre-show dinner reservation at the farm, just across the street from staples center.  i got an e-mail from her as we were on the freeway, with some fun news:  our table was just feet away from none other than my BFF, andrea barber (aka kimmy gibbler from "full house").  not only that, but the group she was dining with included her real BFF...candace cameron bure, "full house"'s dj tanner.

when we arrived, though, there were already other fangirls standing awkwardly at their table - which was pretty packed with a fairly large group of friends.  i debated stopping to say hello and maybe score another picture, but i really didn't want to be one of *those* chicks.  you know what i'm talking about.  and so i settled for stupidly smiling at both of them when they passed our table on their way to and from the restroom.  i am so lame.

i'm not a huge fan of staples center because the place is so damn big that it's not easy to get a decent seat.  but i was pleasantly surprised to find that we actually had a pretty good view of the action. 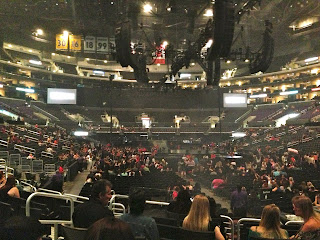 gotta love foursquare.  i felt like it was shaming me for not seeing my friends more often.  sheesh. 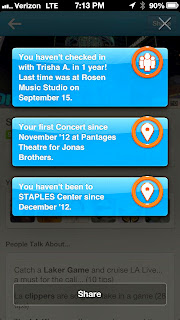 first up:  boyz II men.  with as many hits as they had, it was a little odd to find that 98 degrees had higher billing than they did.  i mean, can you even name more than two 98 degrees songs?  anyway, their short set was thoroughly enjoyable.  i loved B2M so. 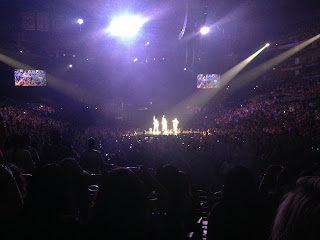 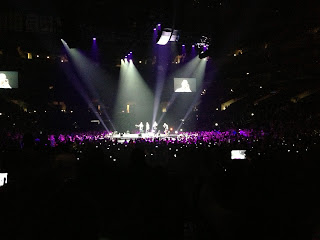 missing from our group photo were trish and kelley, who'd gotten tickets separately but somehow managed to score seats right next to each other several sections away from us. 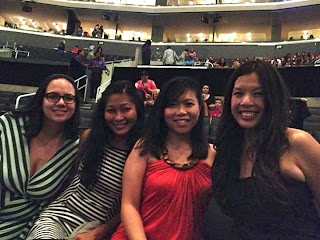 so unlike the NKOTBSB extravaganza, it turned out that the first two acts were actually serving as the warm-up for the main event.  we were treated to new kids' music for almost two hours.  it was a really fun show, despite the slightly gross make-out session that donnie indulged in with a fan just offstage.  there were lights! 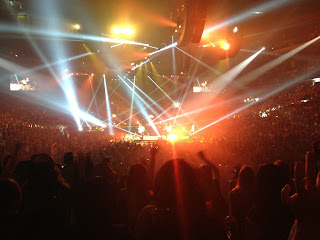 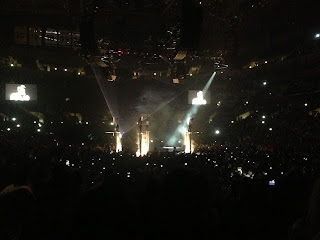 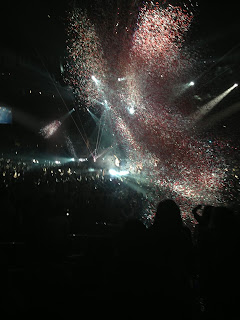 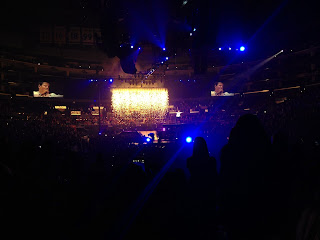