when we finally got home from the airport, i was determined to stay awake as long as i possibly could so that the adjustment to local time wouldn't be so difficult.  i'd been hoping this would work with the bean too, but by the time i turned around to talk to her in the car...she was out cold.

in fact, she was sleeping so hard that she didn't even wake up when we picked her up and put her on the couch.  i left to pick up mollydog, who we'd all missed like crazy, and when i got home the hub was on his way out to get some work done.  the teen took off to see her BFF, and so i kept myself busy getting some air into the stuffy house, unpacking the suitcases, getting laundry started.

i spread out all of our ticket stubs and receipts and things, and it was quite a commentary of what the last two weeks had been like: 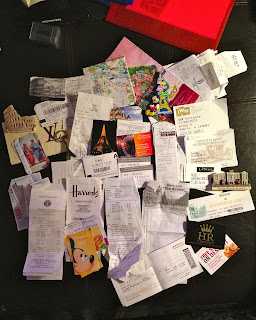 did i mention that we bought an extra suitcase while we were in disneyland paris? 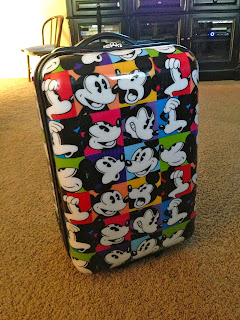 she was still passed out on that couch when the hub and the teen went to bed, and i just didn't have the heart (or the energy! that kid weighs a ton) to move her.  so i made myself comfy on the couch next to her and dozed off somewhere around 11.

and wouldn't you know it...at 1:30 (which would have been 4:30 in rome), she popped up and was wide awake.  and hungry.  so there i was, making her an easy mac in the middle of the freaking night.  she was full of energy and was literally bouncing off the furniture, so i just let her do her thing while i half-snoozed on the couch.  can i say, thank god for round-the-clock disney junior?

speaking of disney, that's what the teen and i had planned for our first full day back home.  haha!  you would expect no less of us, i'm sure.  and it made for a great bargaining chip around 8am when the bean finally started to wind down and was ready to rest again.  the conversation went a little something like this:

her:  mommy, i'm starting to get a little bit tired.
me:  oh, that's good, because you really need to get some more rest.
her:  what are we going to do today?
me:  well, your sister and i were thinking it might be fun to go to disneyland, but you need to take a n...
her:  zzzzzzzzzzzzzzzz

at the gate, we got a little bonus to commemorate the opening day of the "monsters, inc." sequel. 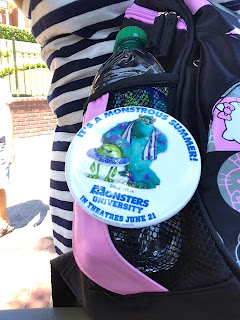 we don't look too tired, right? 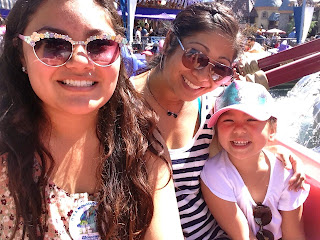 for a friday, it was surprisingly uncrowded.  we managed to get through lines for several of the bean's favorite rides in no time.  because we'd gotten to enjoy a lot of "our" rides in paris, we designated this trip to be solely for the bean's enjoyment.  well, okay...we managed to have a little fun, too. 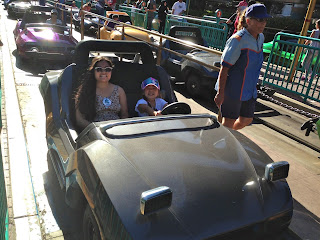 we don't usually sit around and watch the parades, but we did this time.  and we had a pretty good spot, too - right at the entrance to main street, where we could make a quick exit when the last float passed through.  we even caught the nightly disneyland flag retreat ceremony, and the bean busted out some pretty fly dance moves to the live band. 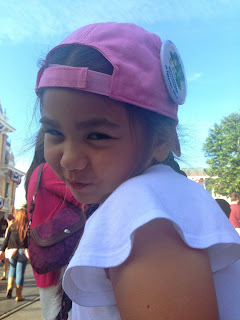 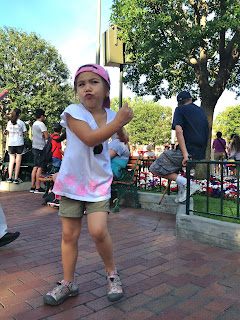 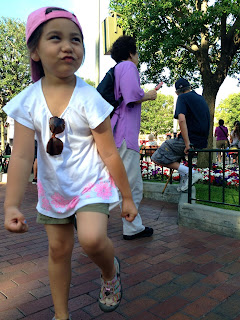 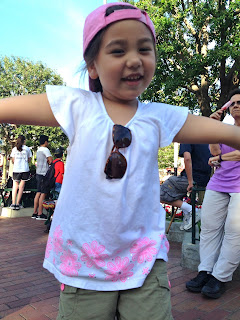 when mickey floated by, she cheered and waved excitedly as if she hadn't seen him in forever. 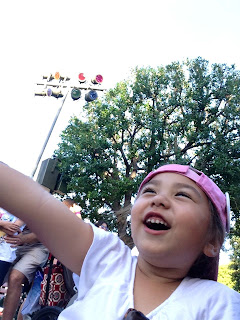 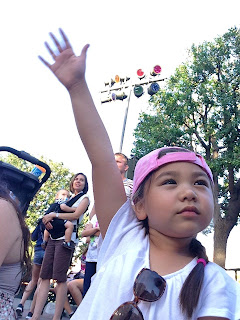 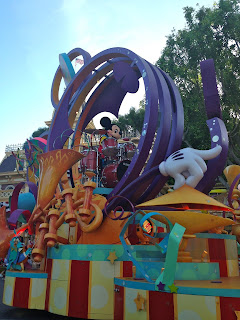 and then we cracked up when she shouted "look!  the cleaner wieners are here!" 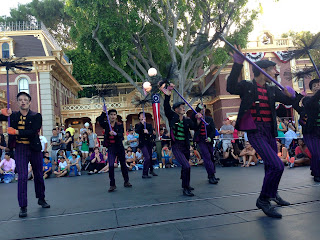 somehow, we managed to keep her awake all the way home.  i was even able to get her in for a quick shower, and then she fell into bed not too far from her usual bedtime.  walking her around the park got her nice and worn out, and then with a full belly and a relaxing shower, she was done.

see, now disneyland can add "great for getting over jet lag" to their list of reasons to buy an annual pass.
at July 09, 2013