it's what's for dinner

i don't BBQ.  i mean, i love to eat BBQ'd food, but i personally don't grill.  i probably could if i needed to, but i really don't want to.  messing with the propane tank and open flame and tongs...ugh, forget it.  i just leave that thing to the hub (and FIL, when he's home).

anyway, i got hit with a mad craving for steak the other day.  and the only way we ever do steak in this house is on the BBQ.  but the hub is hard at work trying to finalize all of the details for the upcoming car show, and wasn't going to get home till right around dinnertime.  and i'd just watched a recent episode of master chef (i love that show, man) where the contestants were tasked with producing a delicious pan-seared ribeye steak.  i watched leslie, my least favorite guy on the show, turn the heat up to high on his pan, plop his seasoned steak in there, and baste it with butter.

i mean, come on.  paula deen aside, butter really does make everything better.  EVERYTHING.

and so i decided that i was going to try my hand at this idea.  i read a bunch of blog posts about how to get it done - some had you sear the meat in the pan and finish it in the oven.  others cooked the steaks on the stove until it was perfectly done.  now, with it being summer and all, i wanted to avoid having to turn the oven on.  so i picked and chose from several different sources all of the steps i thought would add up to a delicious dinner.

first, i patted the meat dry with a paper towel and then seasoned the shit out of it with some lawry's seasoned salt and lemon pepper. 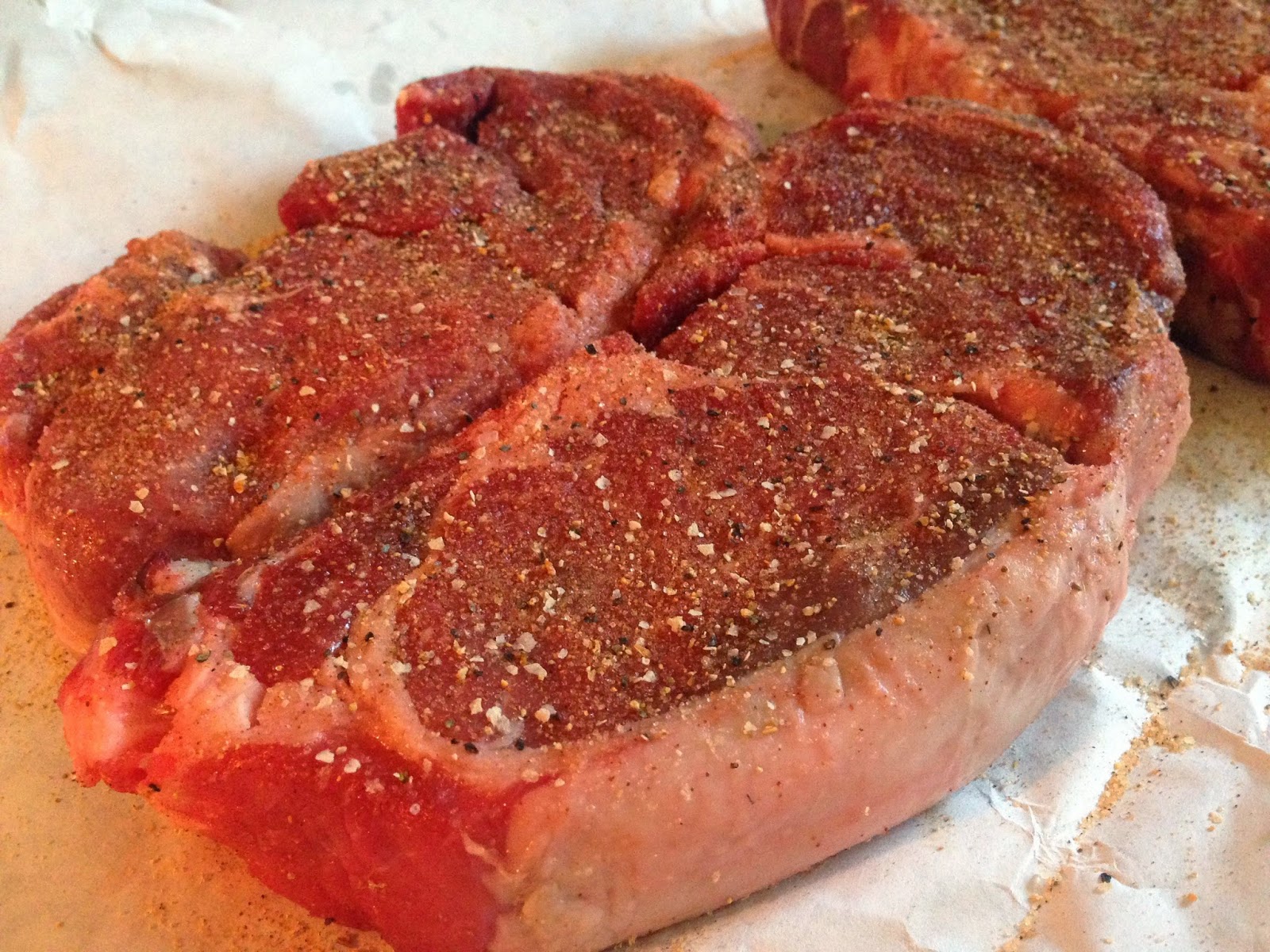 i poured a little vegetable oil into a heavy skillet (i don't have a cast iron one and don't really have the inclination to get one), turned the flame up to high, and waited till the oil started to shimmer and sizzle.  then i picked up the steaks with my tongs (i guess tongs for indoor use are okay in my head.  i'm just wacky like that) and carefully placed them in that hot ass pan.  it sputtered and popped angrily at me, and i grabbed one of my spatter screens to keep from having to clean hot oil off of my entire kitchen.  after about 7 minutes or so, i flipped them over and found that they were searing beautifully.  i plopped a few pats of butter on top and watched them melt into the meat. 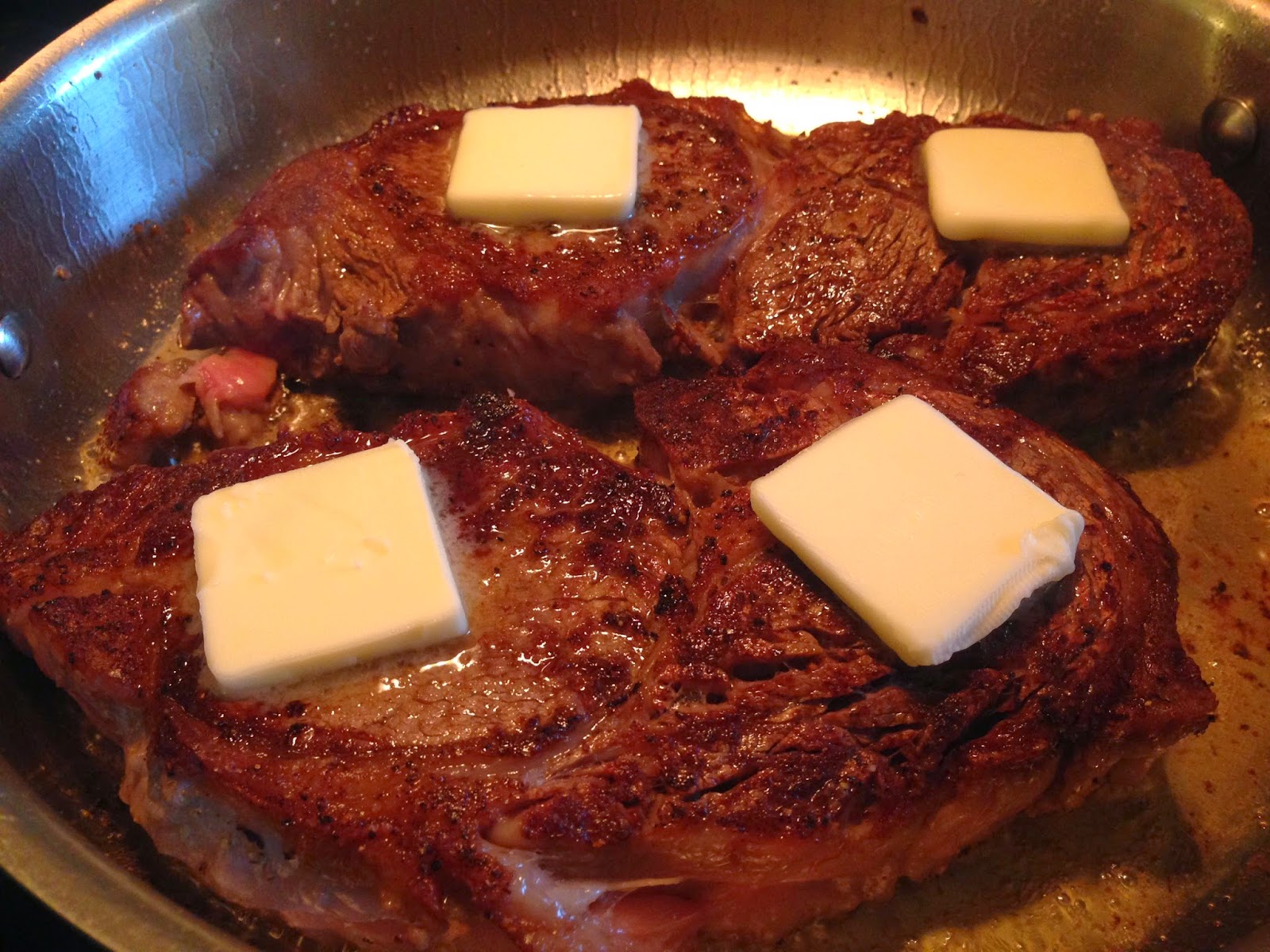 i flipped the steaks a couple of times, basting them with the melted butter every so often, and listening to my stomach growl in response to the delicious aroma that wafted up into my noseholes.  when the meat thermometer read 140, i stopped cooking and moved them to a plate to rest for a few minutes before slicing.

earlier that day, i'd cooked up some bacon and onion and sautéed some fresh green beans with it before putting it into my crock pot.  the recipe actually called for it to simmer slowly on the stove for two hours, but ain't nobody got time for that.  because i'm a genius, i decided that putting them into the crock pot on high for the same amount of time while we ran in and out of the house for errands and chauffeuring the bean around to her activities would probably work just as well.

so, um, yeah...don't do that.  they tasted good, but were still pretty crunchy by the time i served them alongside that perfectly done steak.  lesson learned.  i'll try it again when i have time to babysit them on the stove.  but i got zero complaints as i plated it all up and got it on the table. 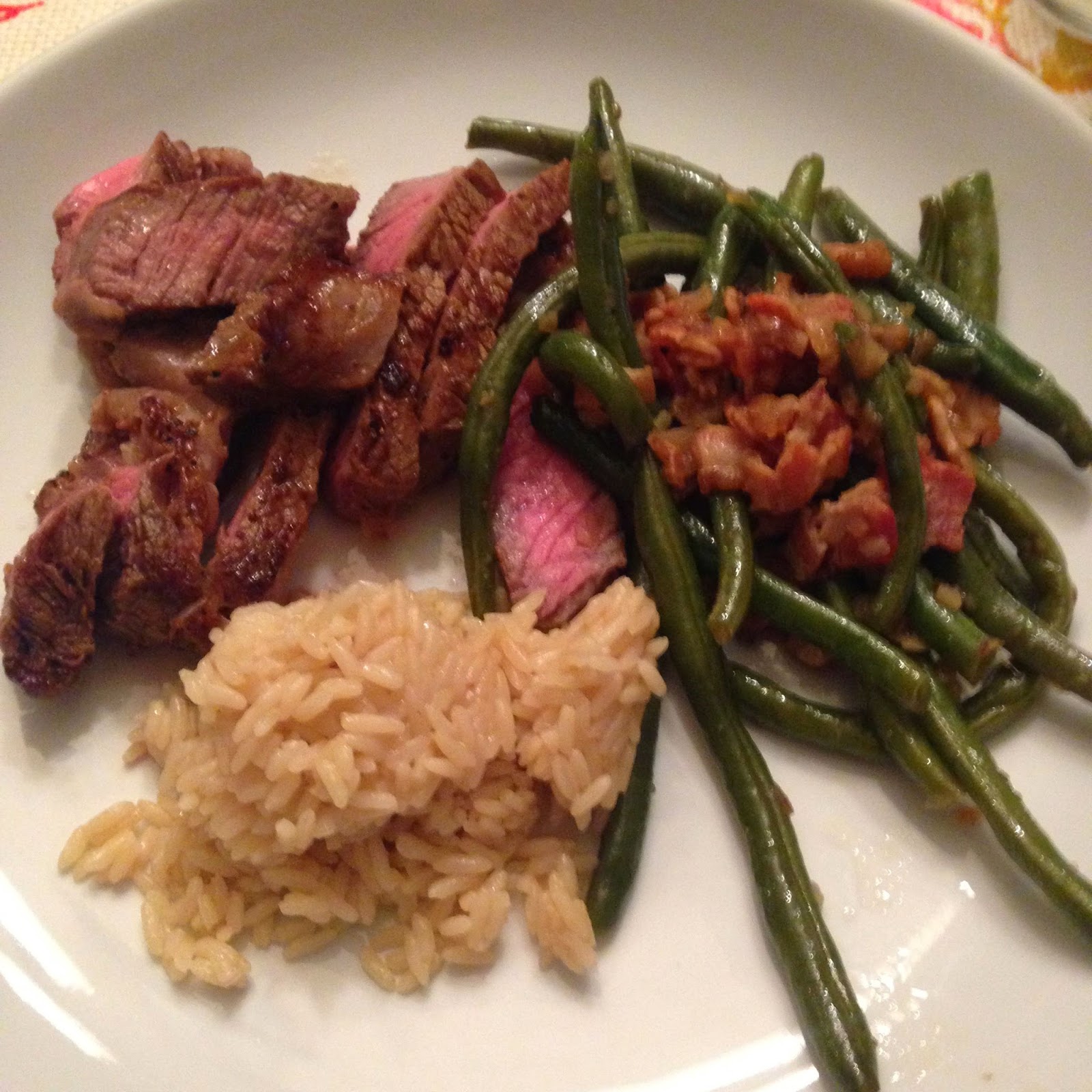