remember a few months ago when the hub got on that fruit/veggie smoothie every day kick?

well, it lasted for awhile.  actually, a lot longer than i expected it to.  heh.  and amazingly enough, he had the bean hooked on them too.  but as most things do after awhile, it got old.  and the smoothies are few and far between nowadays - more like once a week, if that.  and so that shiny new vitamix has been sitting on the counter, unused and unloved for much of the time.  i mean, i use it now and then for little things, but it doesn't get nearly as much use as it did before.

and then i read somewhere that you could make hot soup in this thing.  and frozen desserts, too!  i was all like, WUT.  how?  so i did a little googling, which led me to the vitamix recipe website.  there i learned about all sorts of fantastic things i could do with this thing, from the soup to sorbet and muffin batters and bread doughs and even the self-cleaning option.

the bean had mentioned wanting some asparagus soup earlier that day, and with a pound of fresh asparagus sitting in the fridge just waiting to be used, i wasn't gonna brush off a healthy request like that.  never mind that it was damn near 90 degrees outside - if she wants veggies, i'm giving 'em to her.

i found a super easy, speedy fast way to get the asparagus cooked in the microwave courtesy of alton brown.  all you do is dampen a few paper towels, place the asparagus inside, sprinkle it with a little salt and pepper, and roll it up. 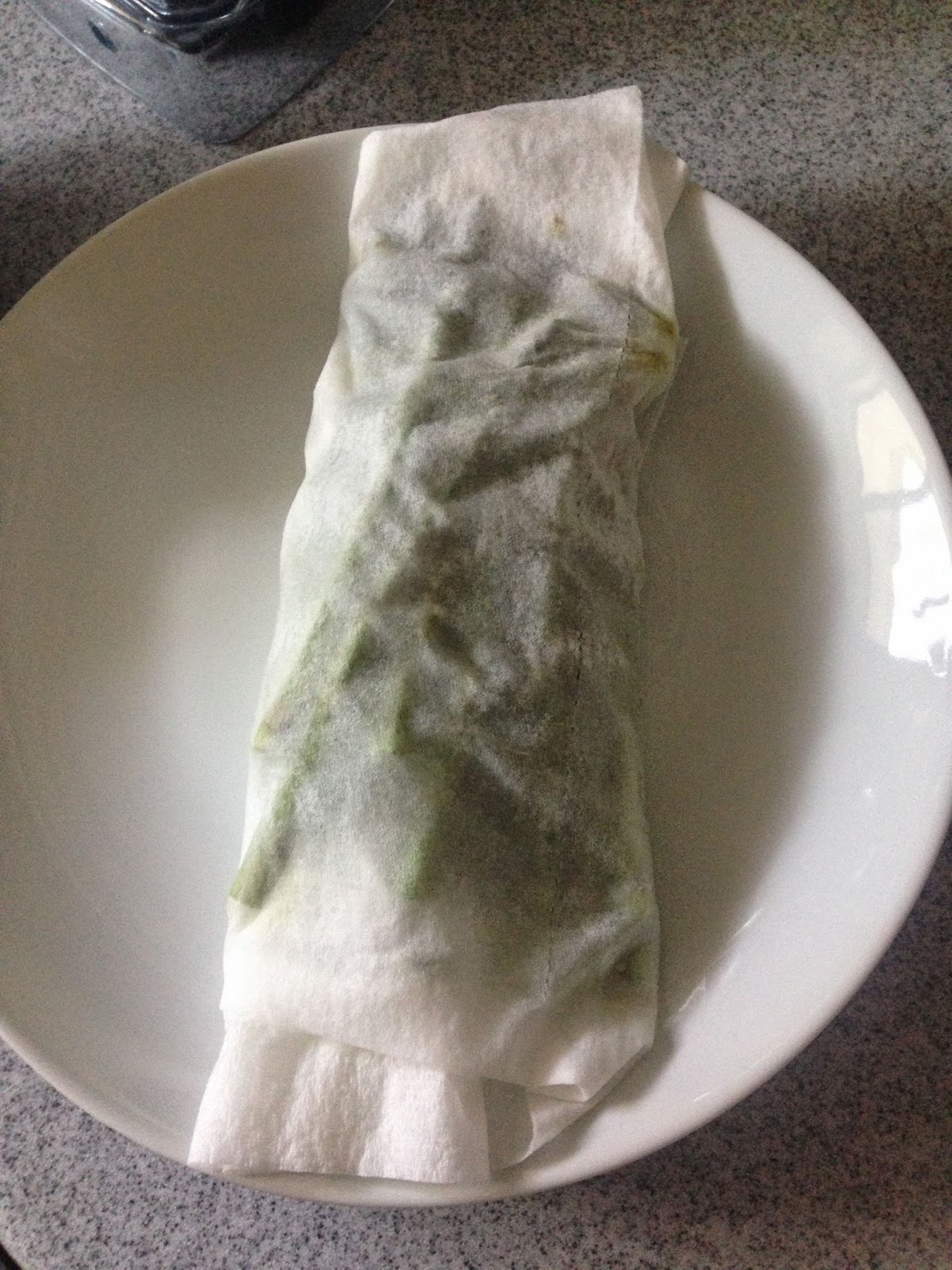 pop that sucker into the microwave for about 3-4 minutes, and voila - perfectly steamed asparagus. 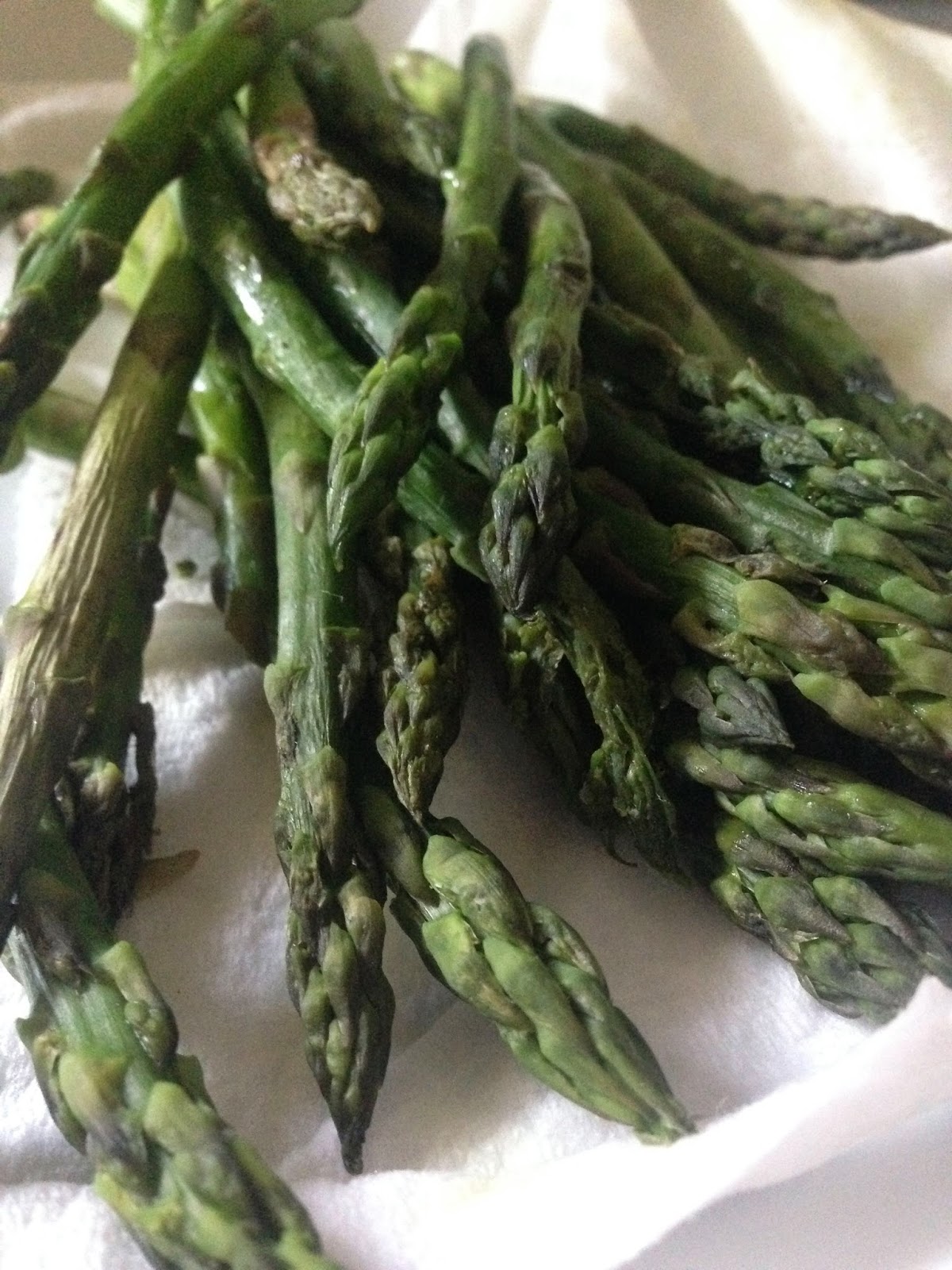 into the vitamix it went, along with some chicken broth. 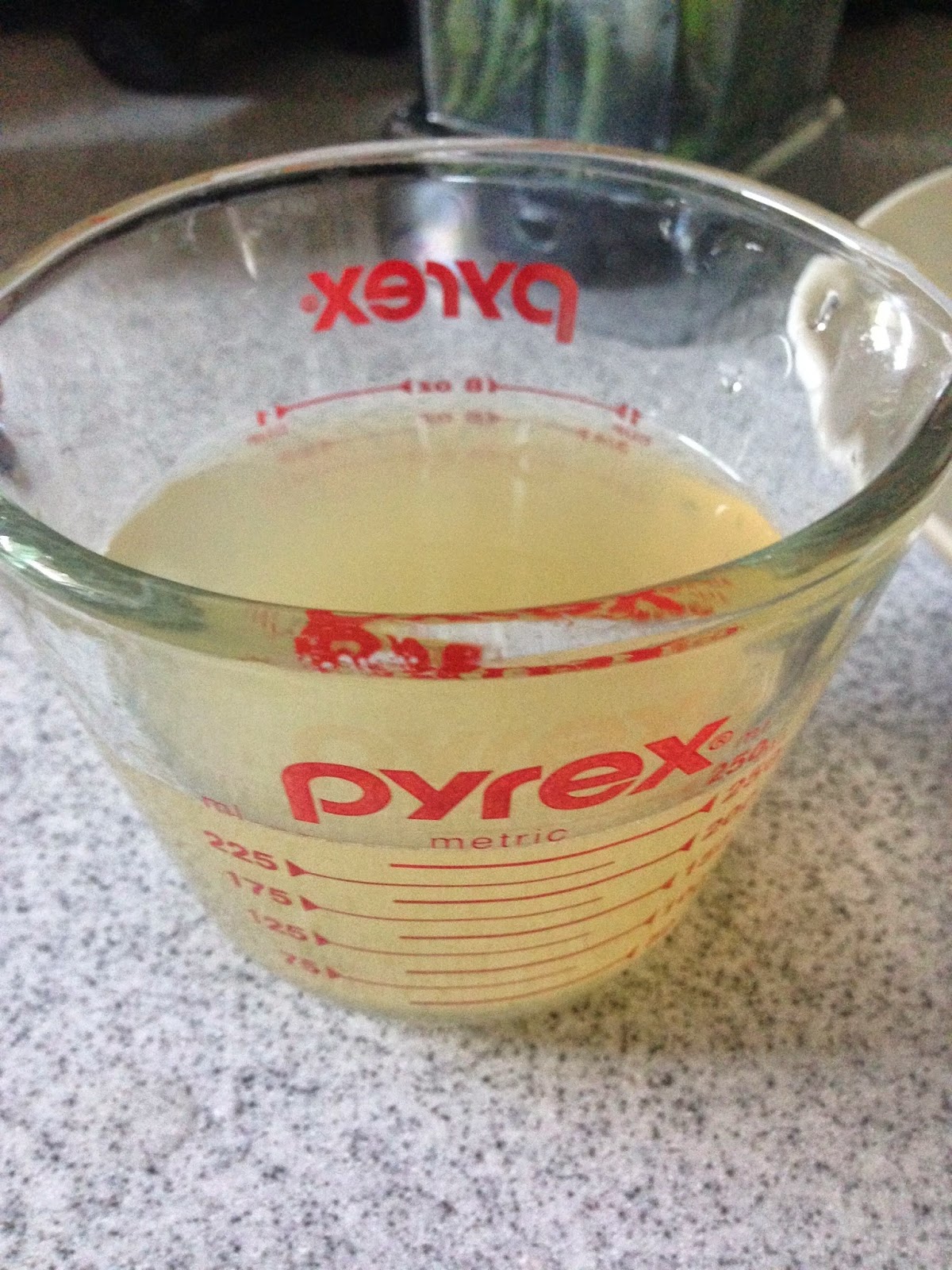 then you turn that bad boy on slowly, eventually flipping the switch to high.  let it blend for about 5-6 minutes.  that shit is crazy loud, but it doesn't last forever. 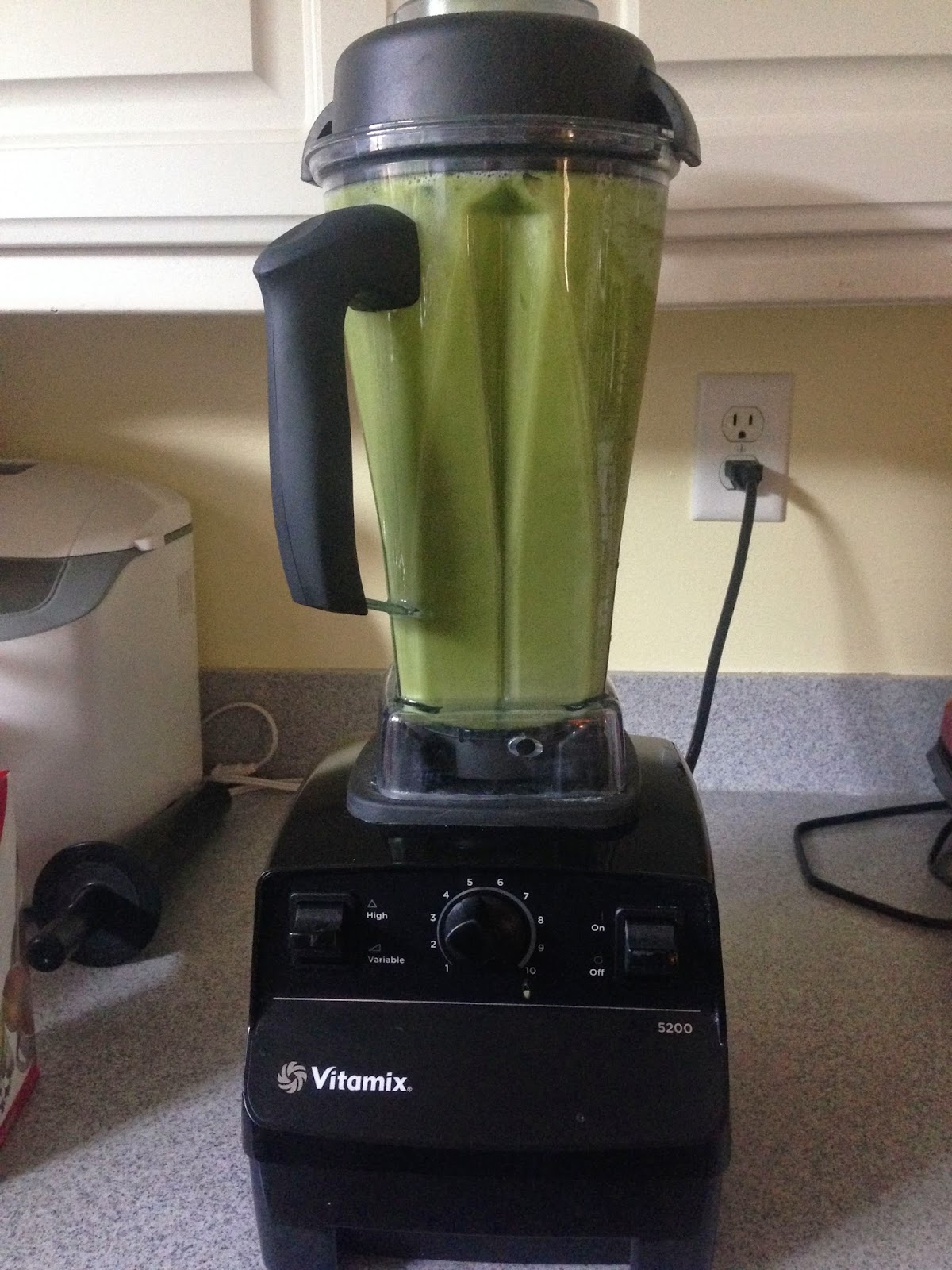 after a couple of minutes, i touched the outside of the blender to see if it was really warming up.  sure enough, it was getting pretty heated.  i was amazed.  and when the time went off, i added in a little cream, blended it for a few more seconds, sprinkled in a little salt and pepper, and then poured out the steamy concoction into mugs for me and the bean. dudes.  that shit was amazing.  hot, delicious, fresh cream of asparagus soup in about 10 minutes with damn near no work at all.  next time, i'll add more asparagus to thicken it up a little (or less broth, i suppose, but what fun is that?), but otherwise - it was really good.  so good that the bean devoured hers and was disappointed to learn that there wasn't any more.

but that's okay.  i consoled her with a scoop of the fresh nutella crunch ice cream we'd made earlier that day. 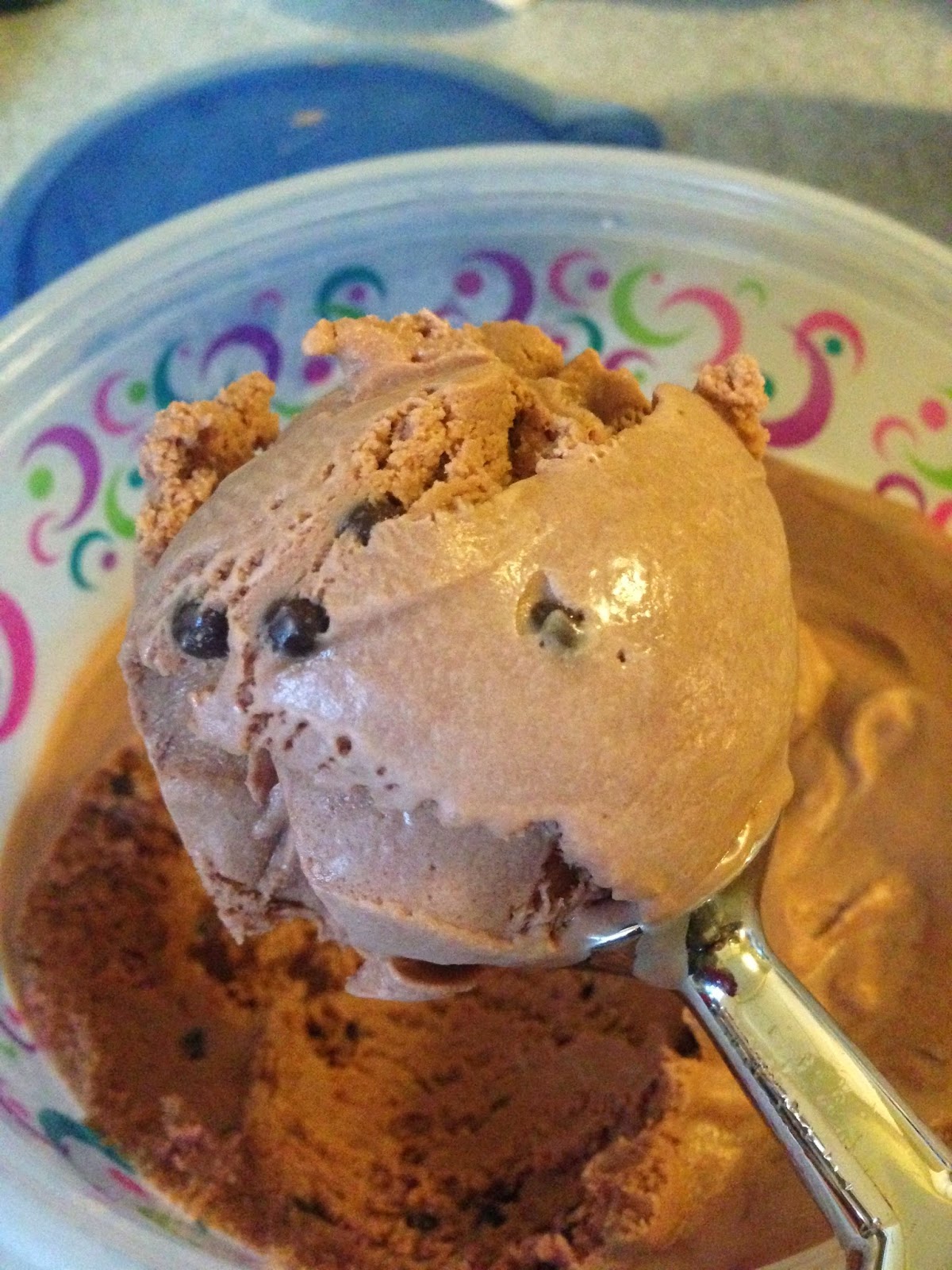 no, we didn't use the vitamix for it - not this time, anyway.  but just wait...we'll be tackling that next.

Email ThisBlogThis!Share to TwitterShare to FacebookShare to Pinterest
Labels: adventures in cooking, the bean likes soup