somehow, i was lucky enough to be invited along by mcdonald's of soCA to join their social media group for a tour of gaviña coffee's warehouse and a coffee tasting.  i really didn't know what to expect, but i thought it would be cool to check it out and learn a little about the process of coffee roasting.

a couple of days before, i received a confidentiality agreement to sign along with a list of safety regulations to adhere to in regards to attire.  like, some obvious ones like no open-toed shoes, open cuts or sores (ew), clean hands, etc.  plus no jewelry, loose or open jackets, and hairnets required.  yaaaay.  but i get it - working factory, food packing environment, yadda yadda yadda.

the warehouse is located in a small city just south of downtown l.a.  i mean, when i say small, i really mean small - the entire city fits in 5 square miles.  and gaviña has kept their operations in this same city since they first opened in 1967.  it's still family-owned and family run, with the original owner's four children at the helm.  ever heard of don francisco coffee?  that's their father. 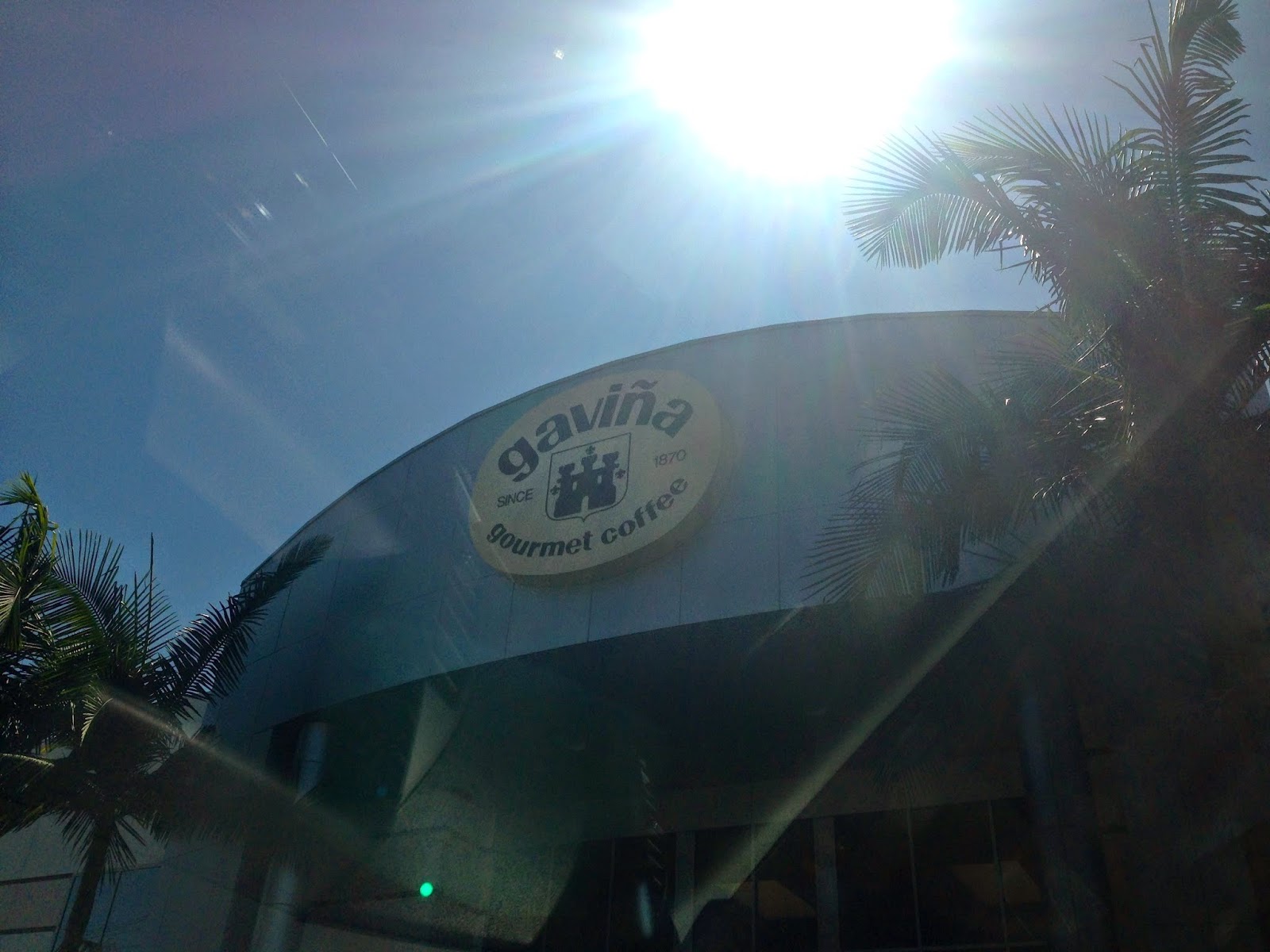 we were greeted by leonor gaviña-valls, one of the four owners, along with her daughter anna.  they were both really friendly and full of tons of information and interesting tidbits about the coffee business.  i'm pretty sure that between the two of them, plus anna's cousins michael and frank, there isn't a single question about coffee that they couldn't answer.  i wasn't actually sure what i was allowed to take pictures of and didn't want to interrupt the stream of information we were listening to, so i just held off on photos for most of the tour.

now, i've always known that coffee is a bean.  duh, right?  but i never really gave it much thought beyond that.  so i really learned a lot over the couple of hours that we were there.  like, coffee literally grows on trees: 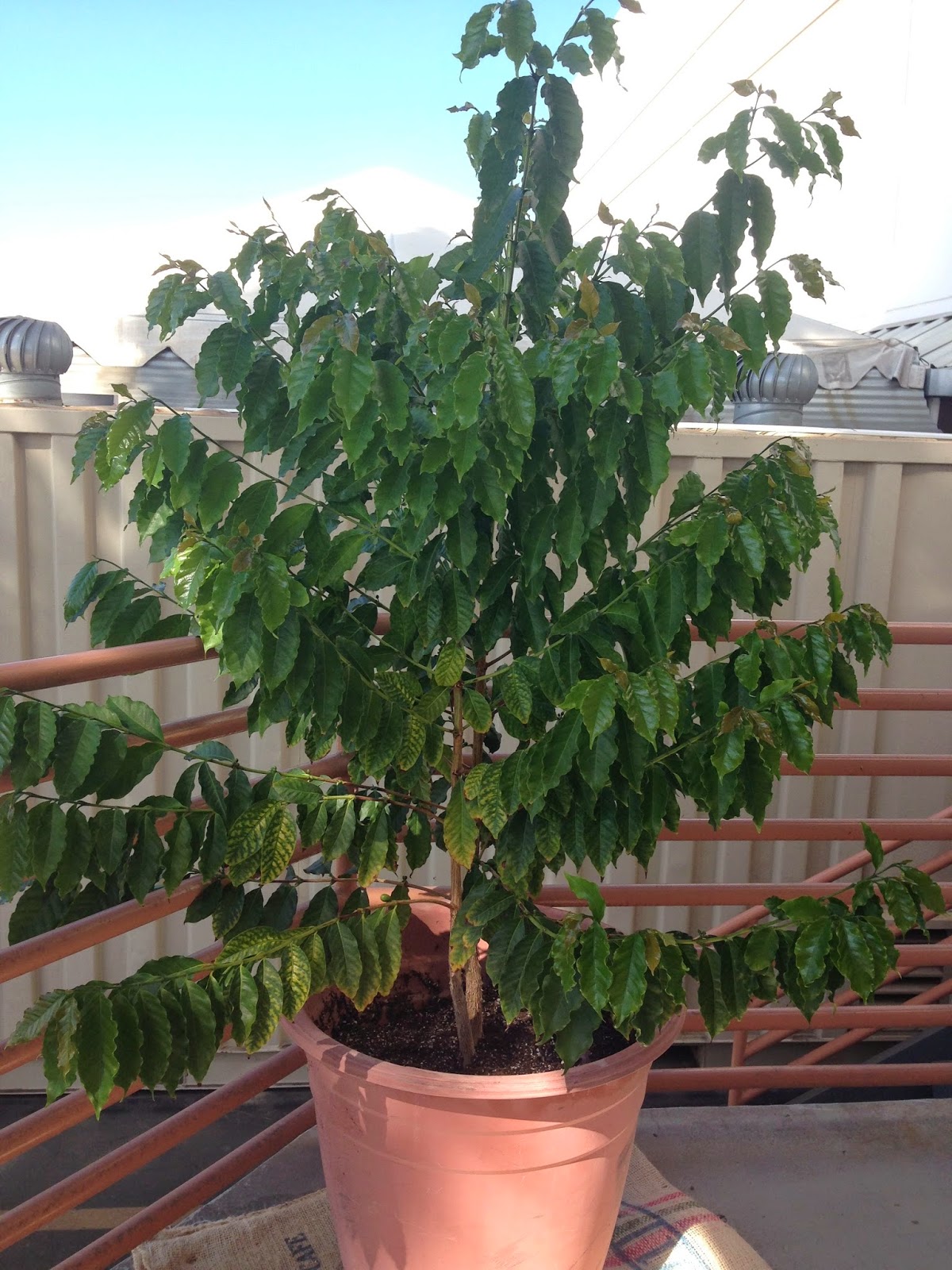 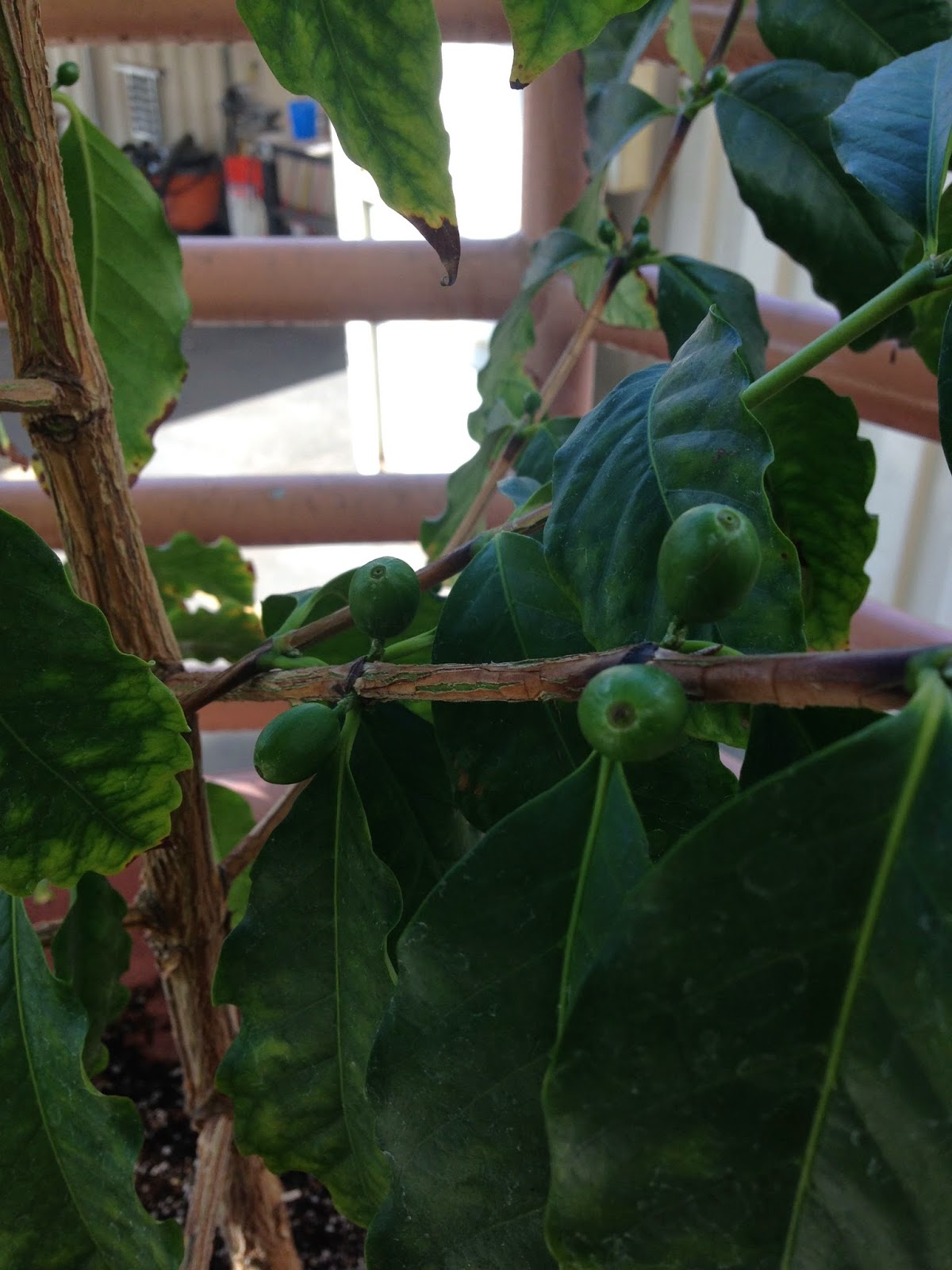 one coffee tree produces enough beans to make just one pound of coffee per year.  crazy, right?  and it comes from these berry-like fruit things. 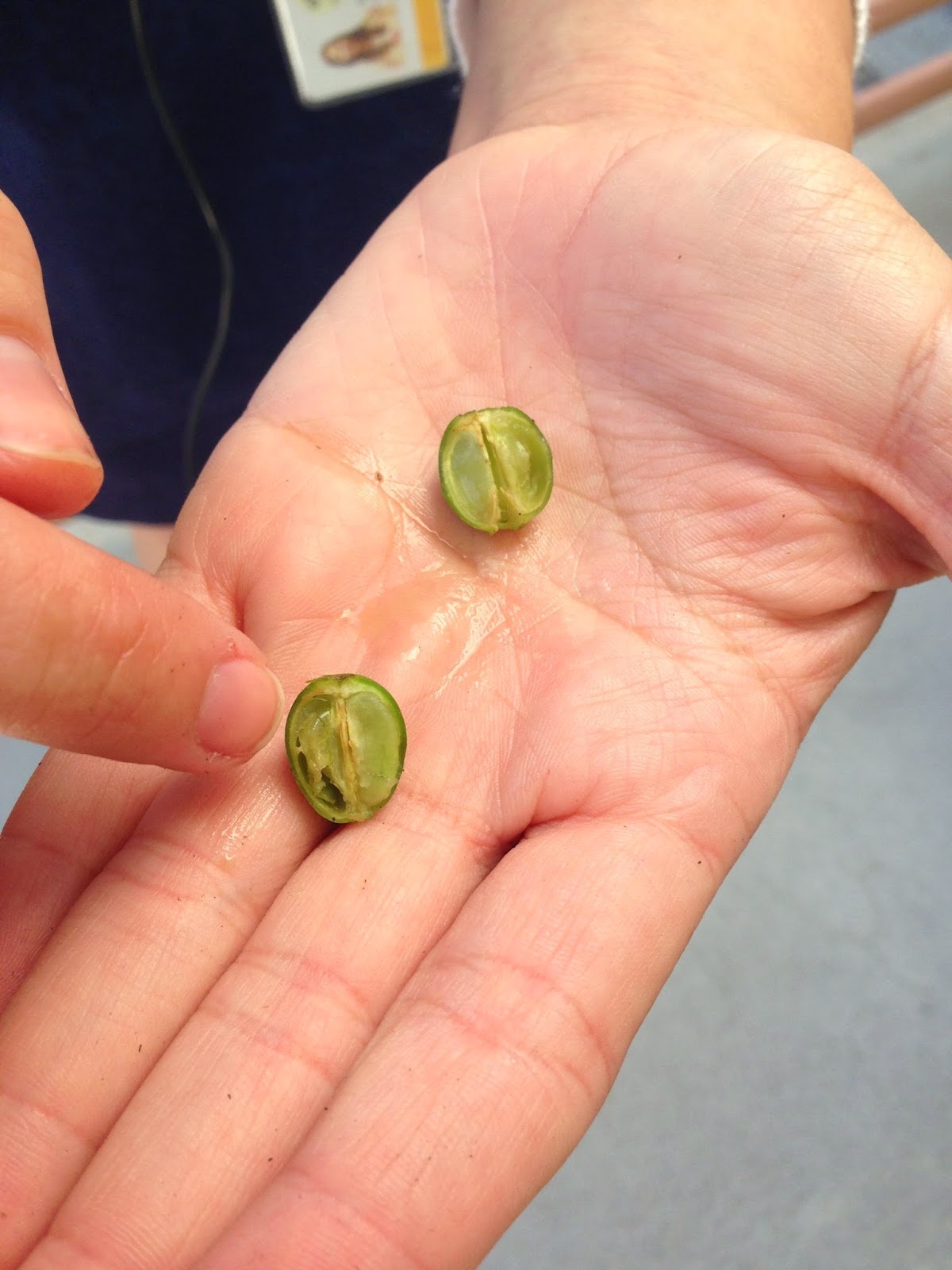 you have to split it open, and you'll find a thin layer of juicy fruit inside the shell.  then there's a thin skin that covers the bean itself.  at gaviña, they remove that silver skin, compact them into bricks, and sell them to companies that use it to make animal feed.  they find a way to repurpose or reuse almost everything in the factory.

the bags of green coffee beans arrive from shipping containers.  those bags are closed with a single string, and one of the jobs in the factory is to cut that string off, open the bag, and allow the beans to spill out into a machine for sorting, starting the roasting process.  then the bags are collected and recycled. 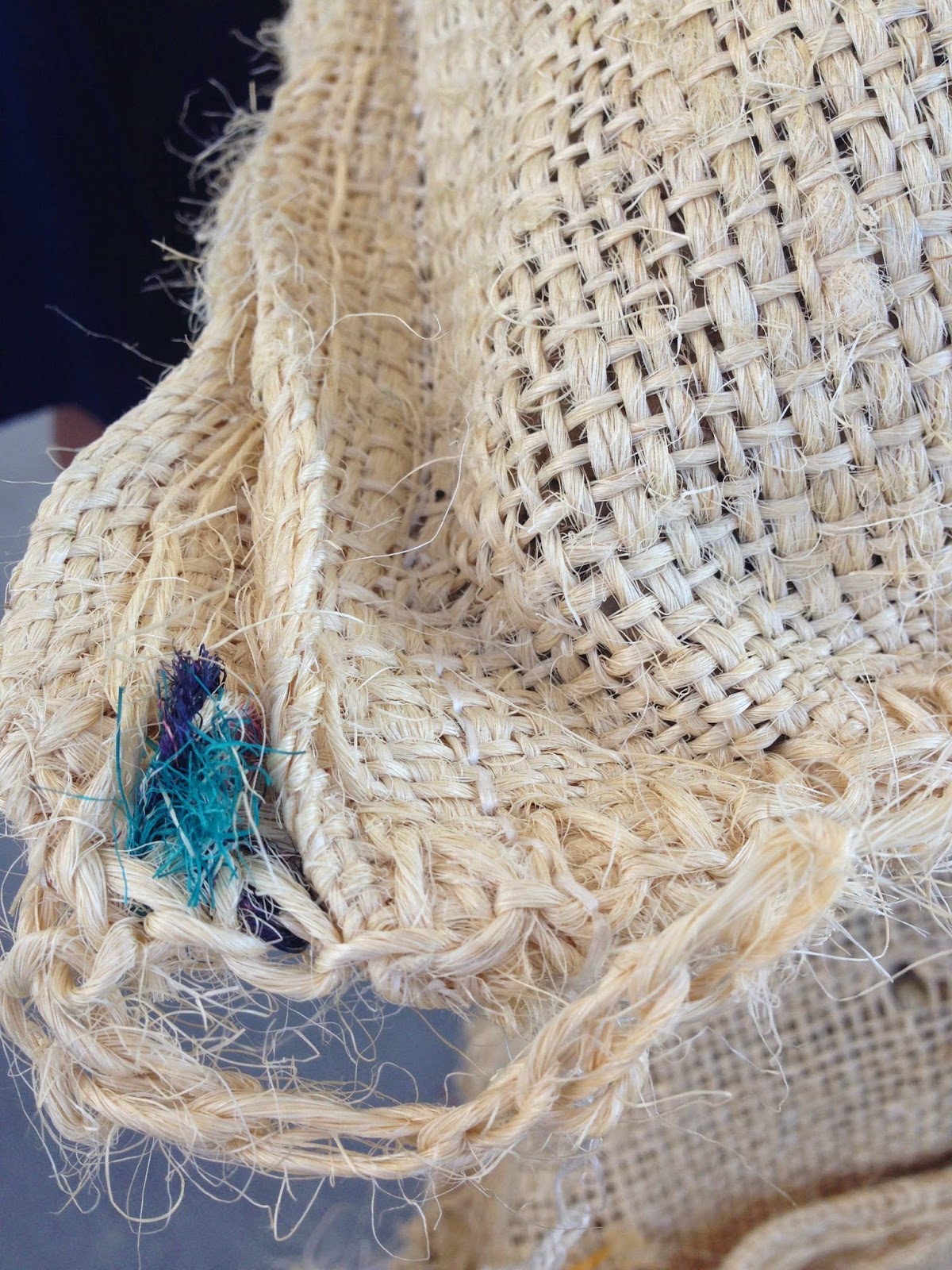 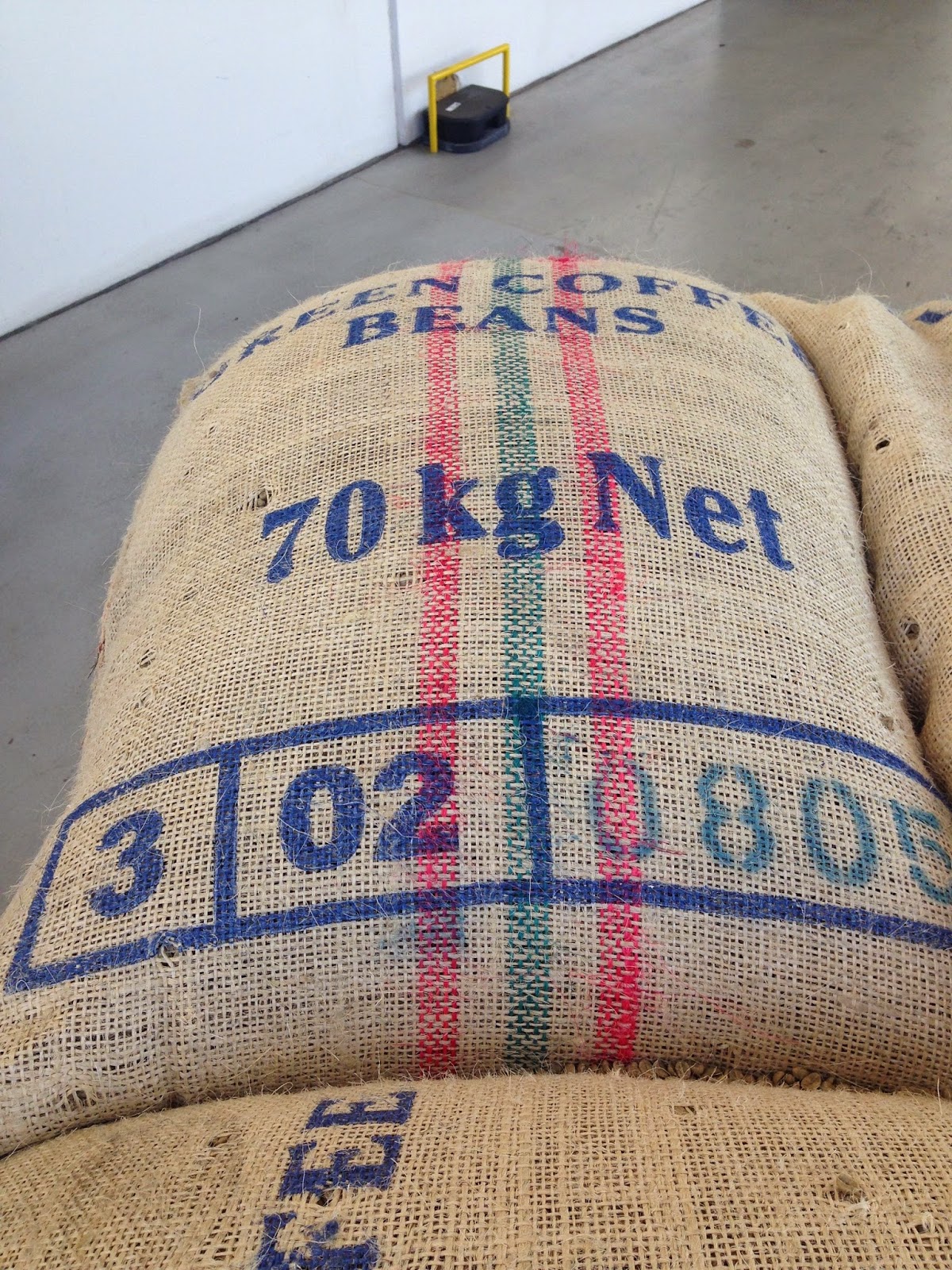 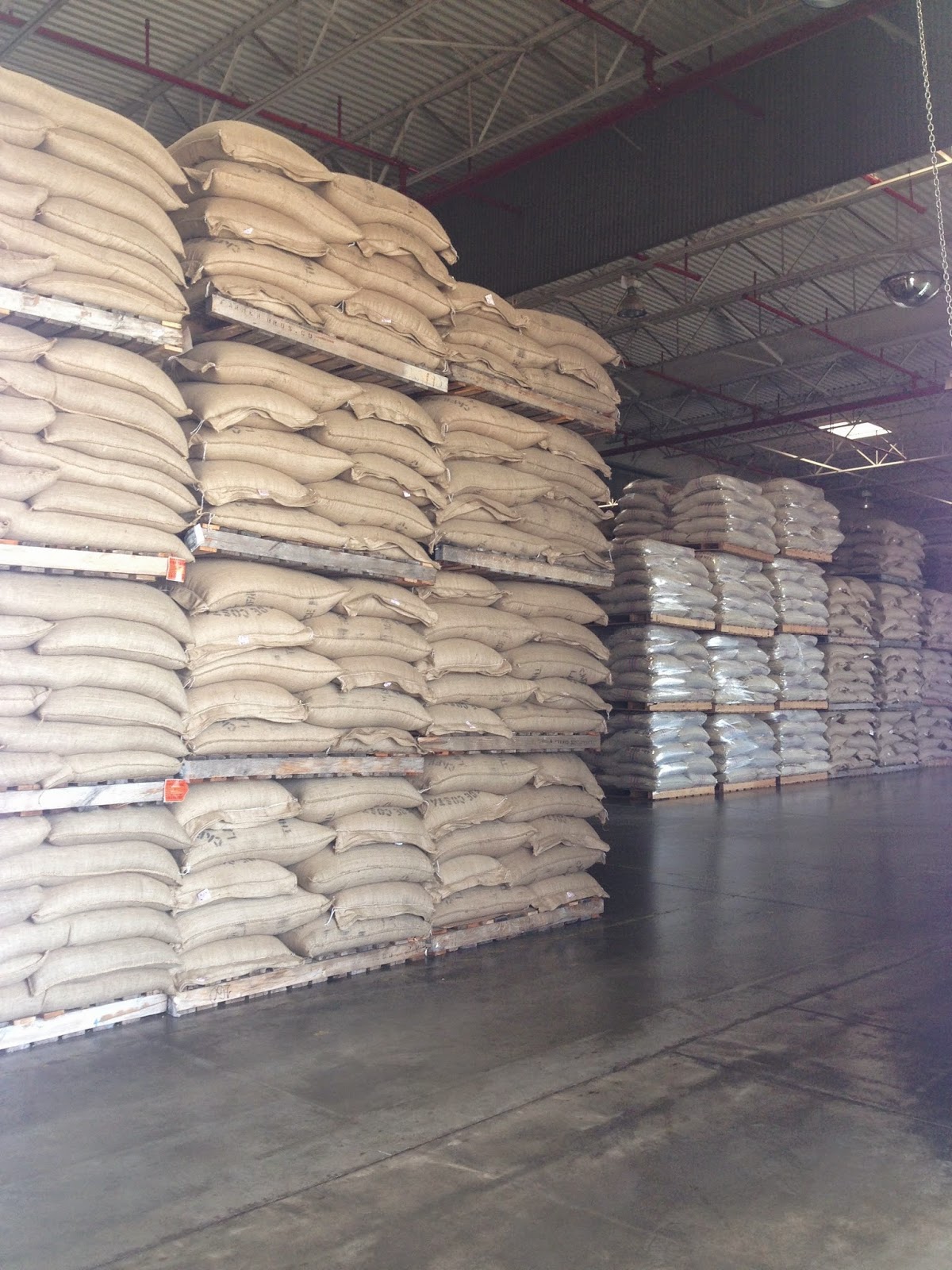 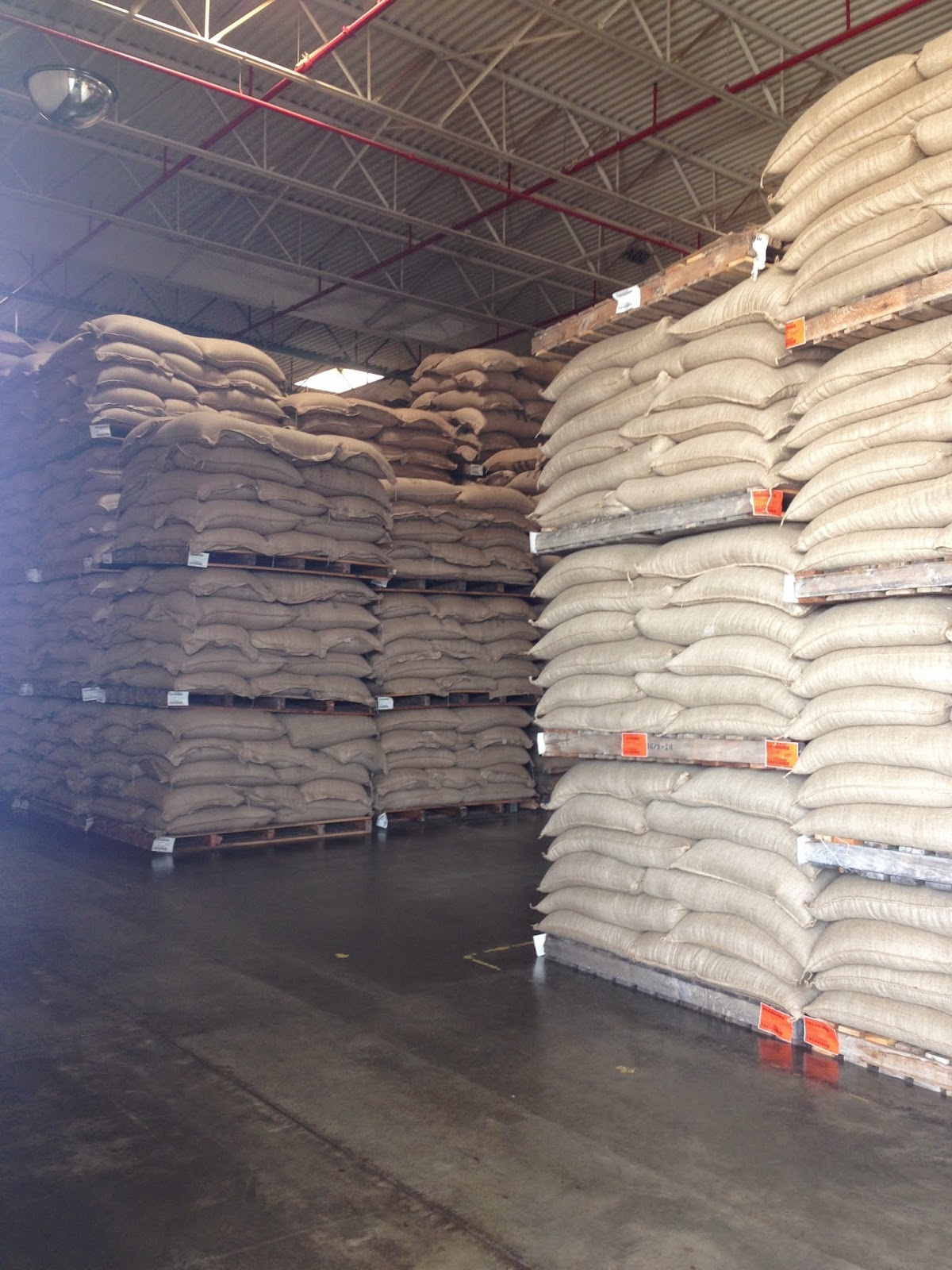 learning all about how coffee is harvested and processed was really interesting.  however, since my brain is the size of a pea, i couldn't repeat it all for you.  just know that there's a lot of work that goes into it all, and that coffee you enjoyed this morning went through a lot to be lucky enough to reach your cup.  and if you got that coffee at mcdonald's, it really is the cream of the crop.  the standards at gaviña are incredibly high, and they've been supplying mcdonald's (mostly in california, but also in other western states) with their coffee since the early 80s.

i look good in a hairnet, right?  RIGHT? 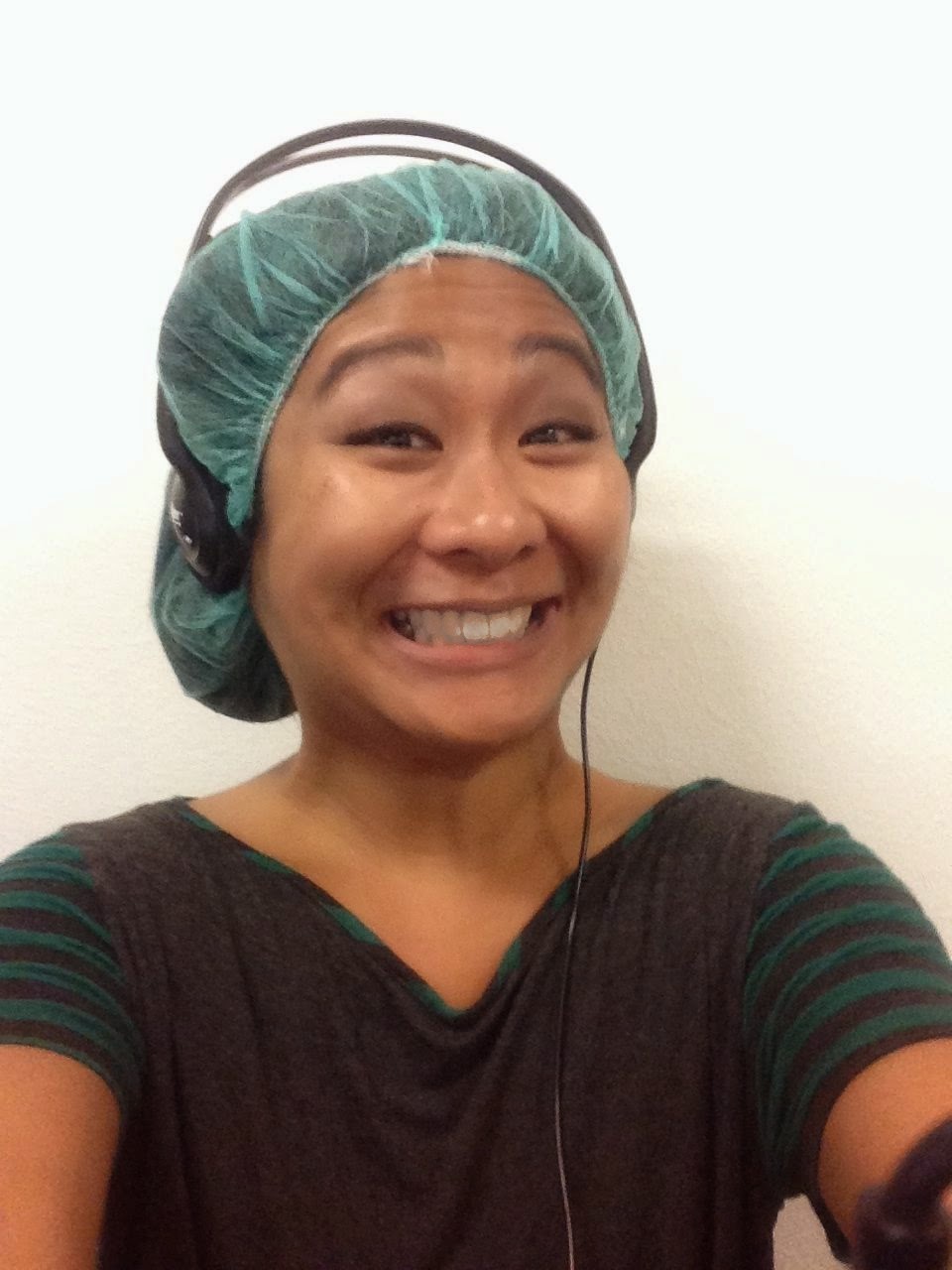 i thought all of the antique coffee equipment was cool, even if i had no idea what most of it was used for. 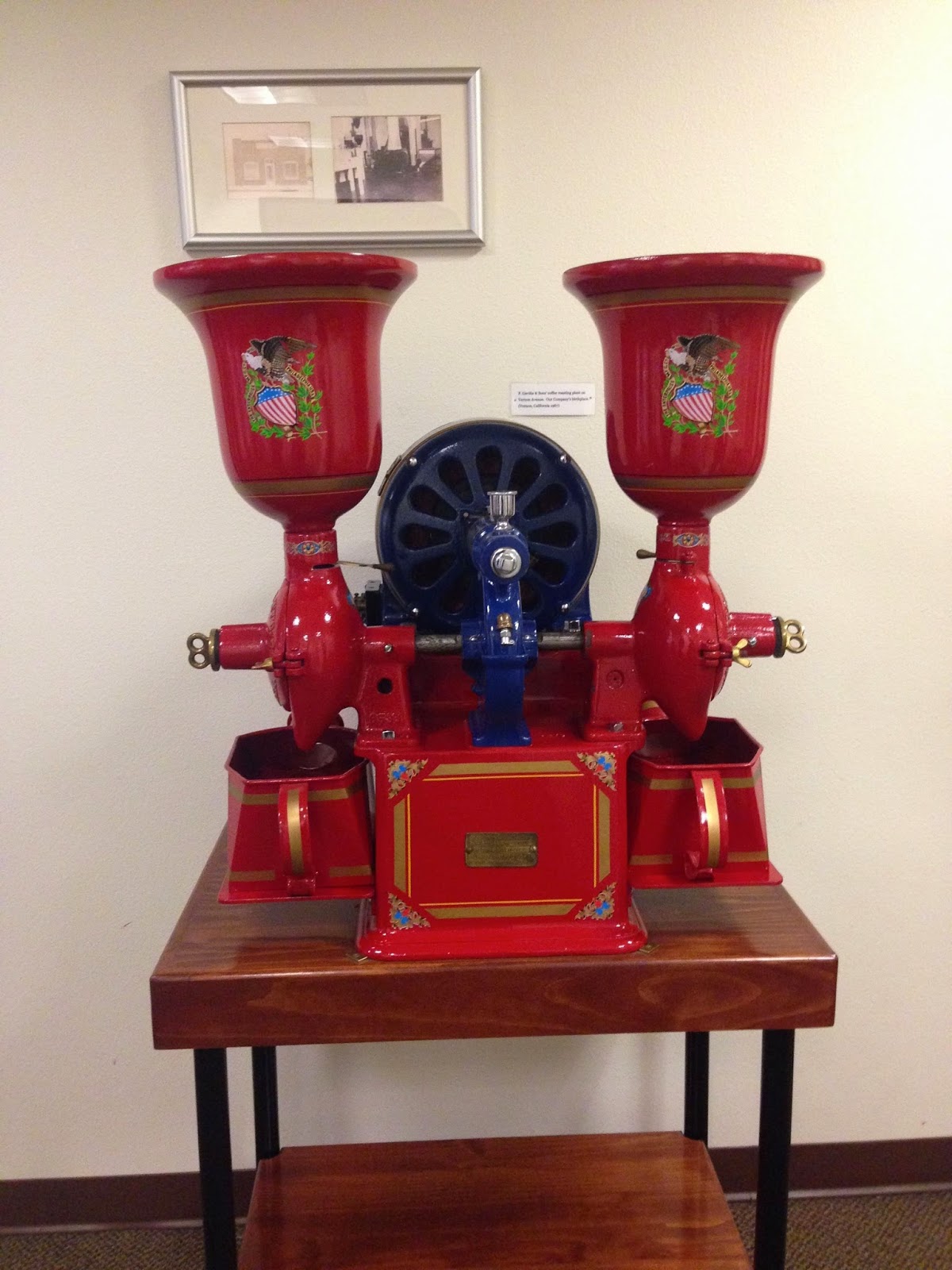 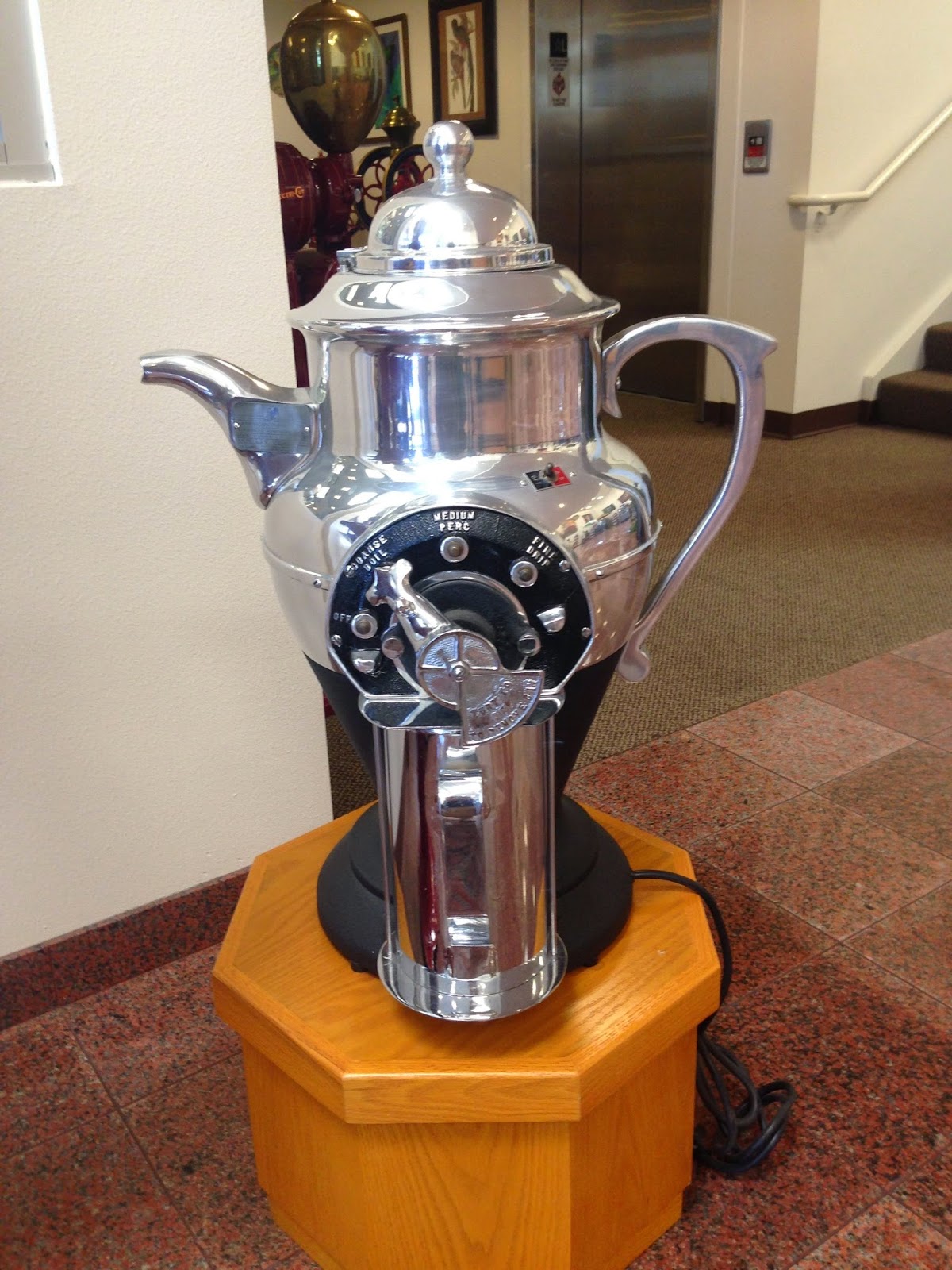 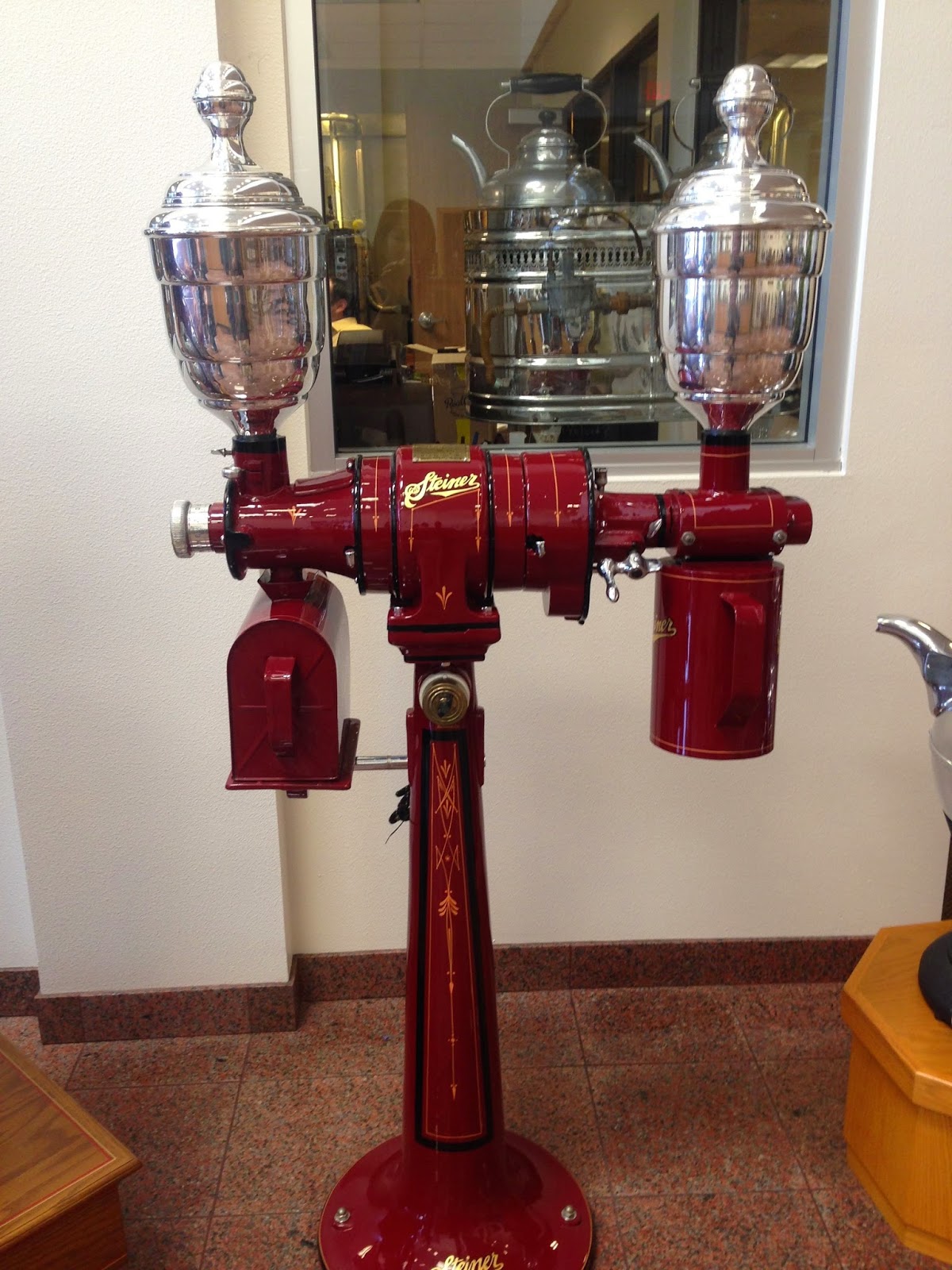 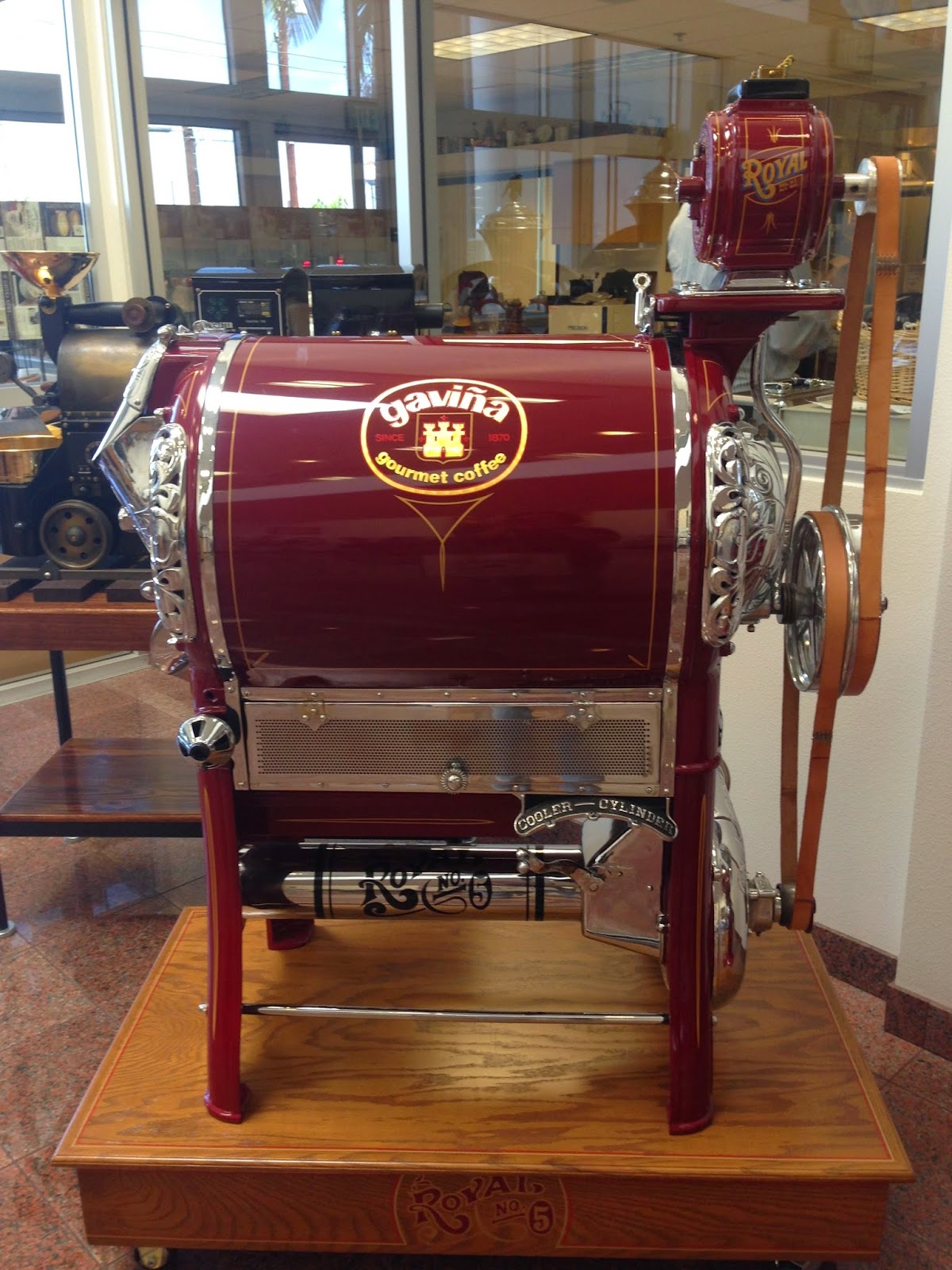 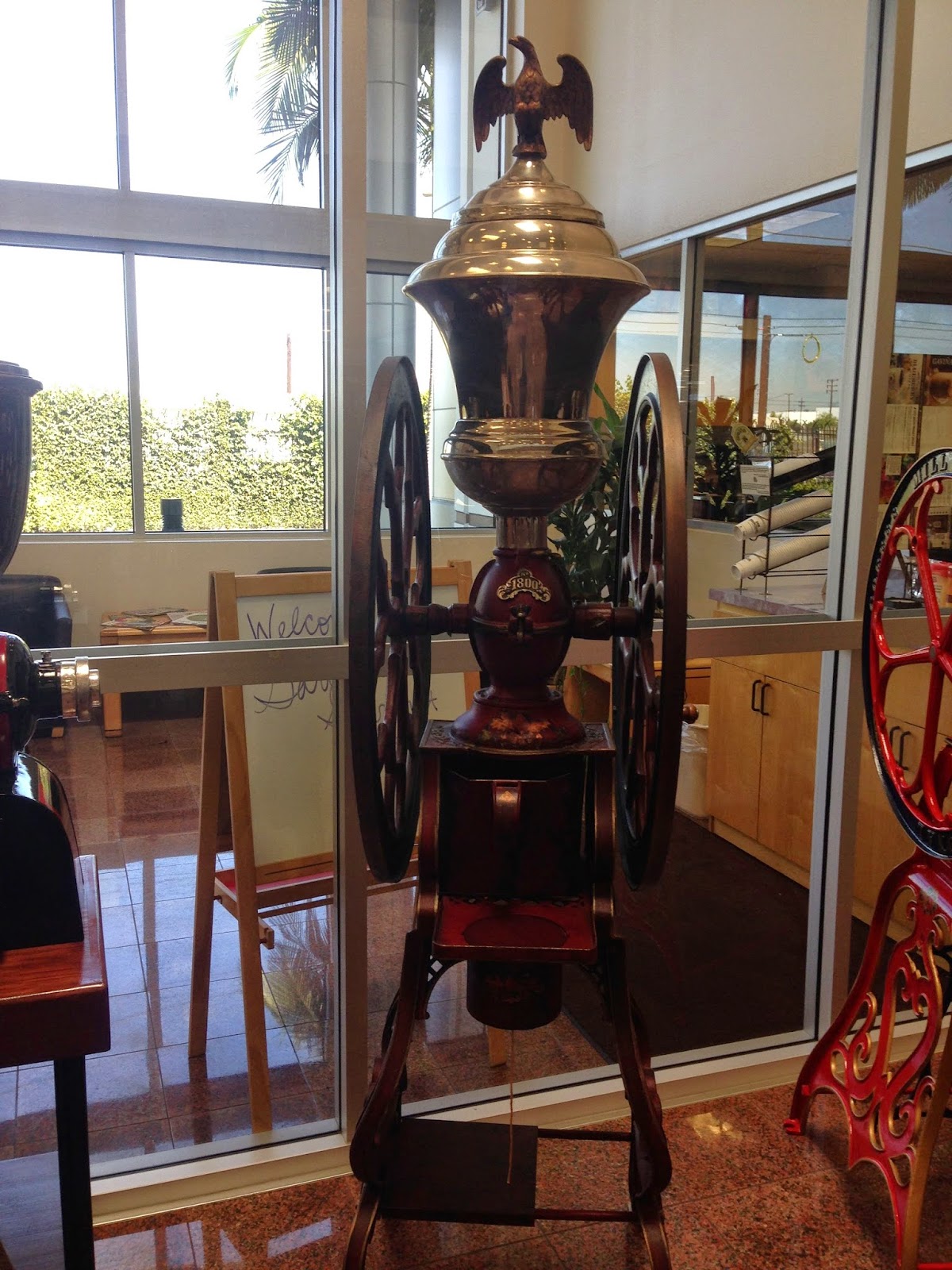 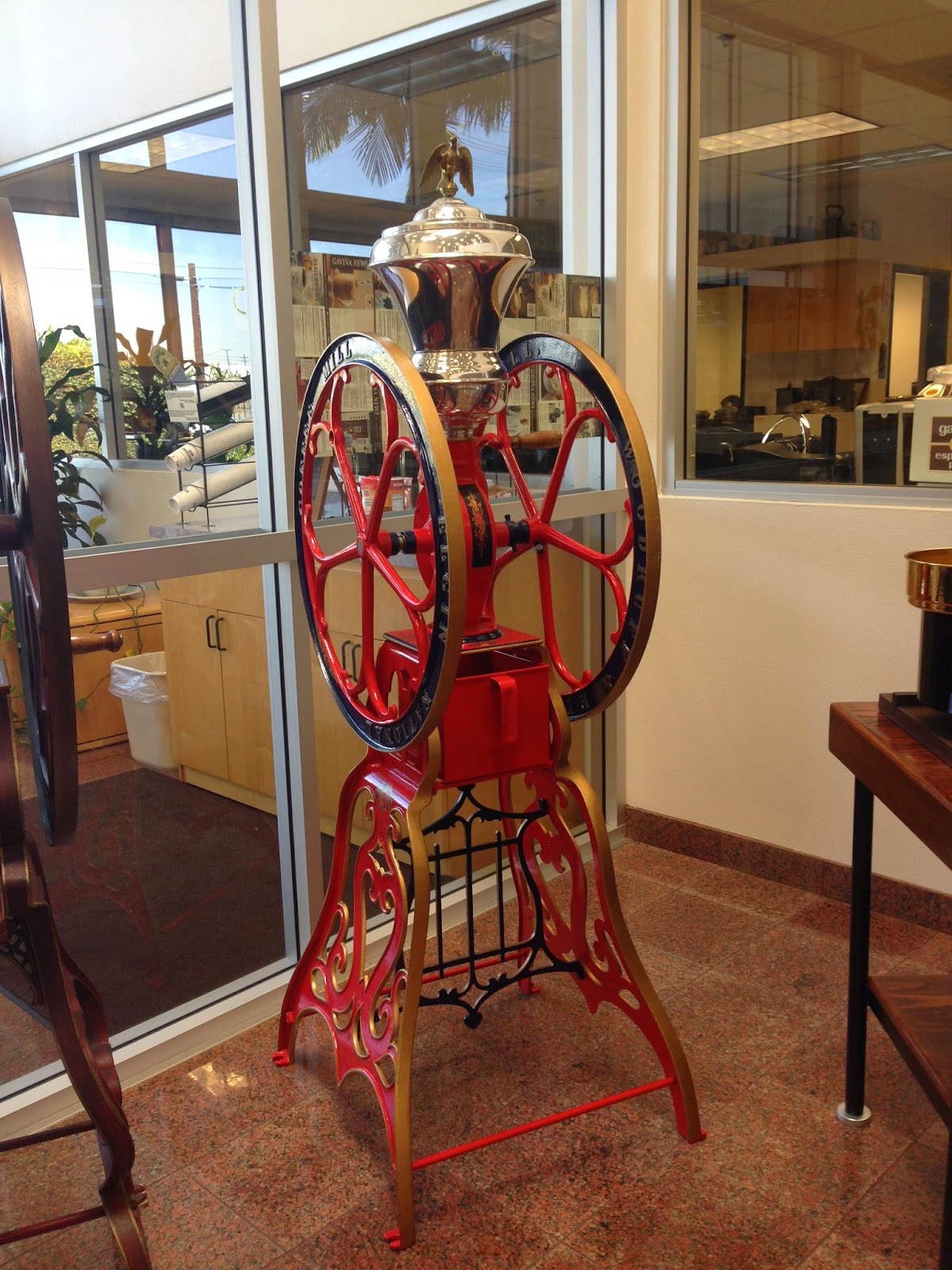 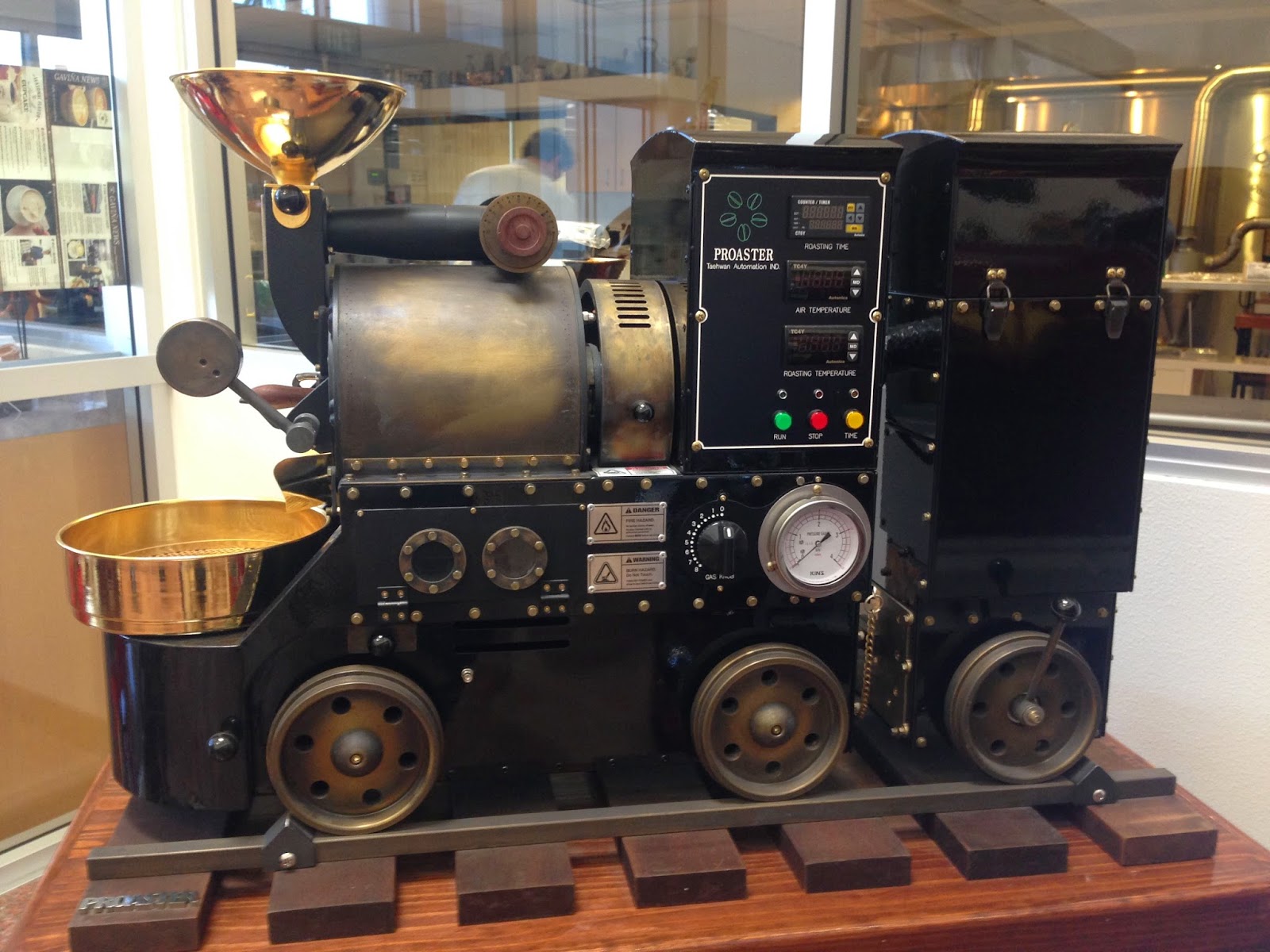 coffee tasting is called "cupping."  in the cupping room, we sat down to a table equipped with a lazy susan in the middle and several cups of different types of coffees from various regions set out for us. 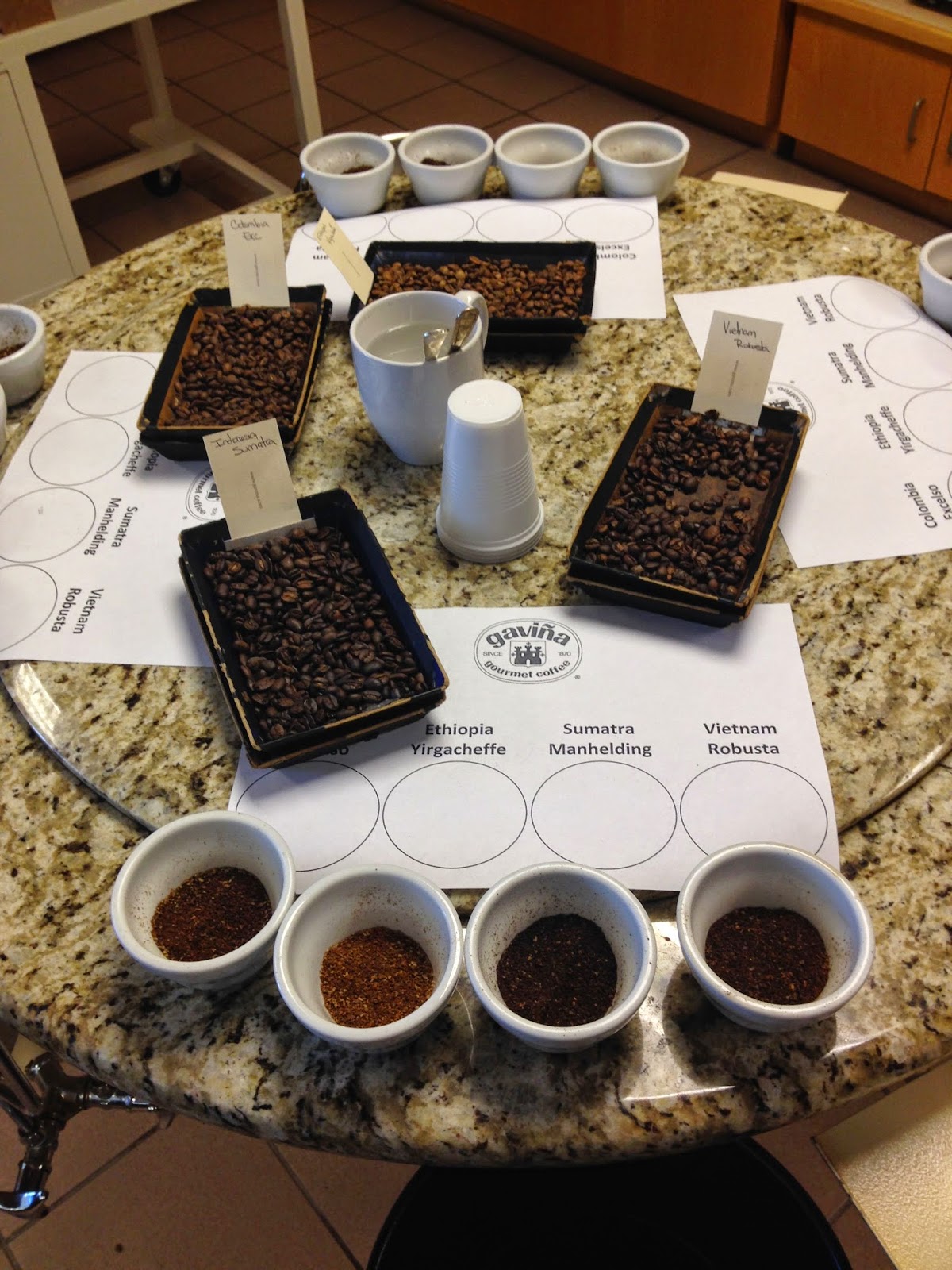 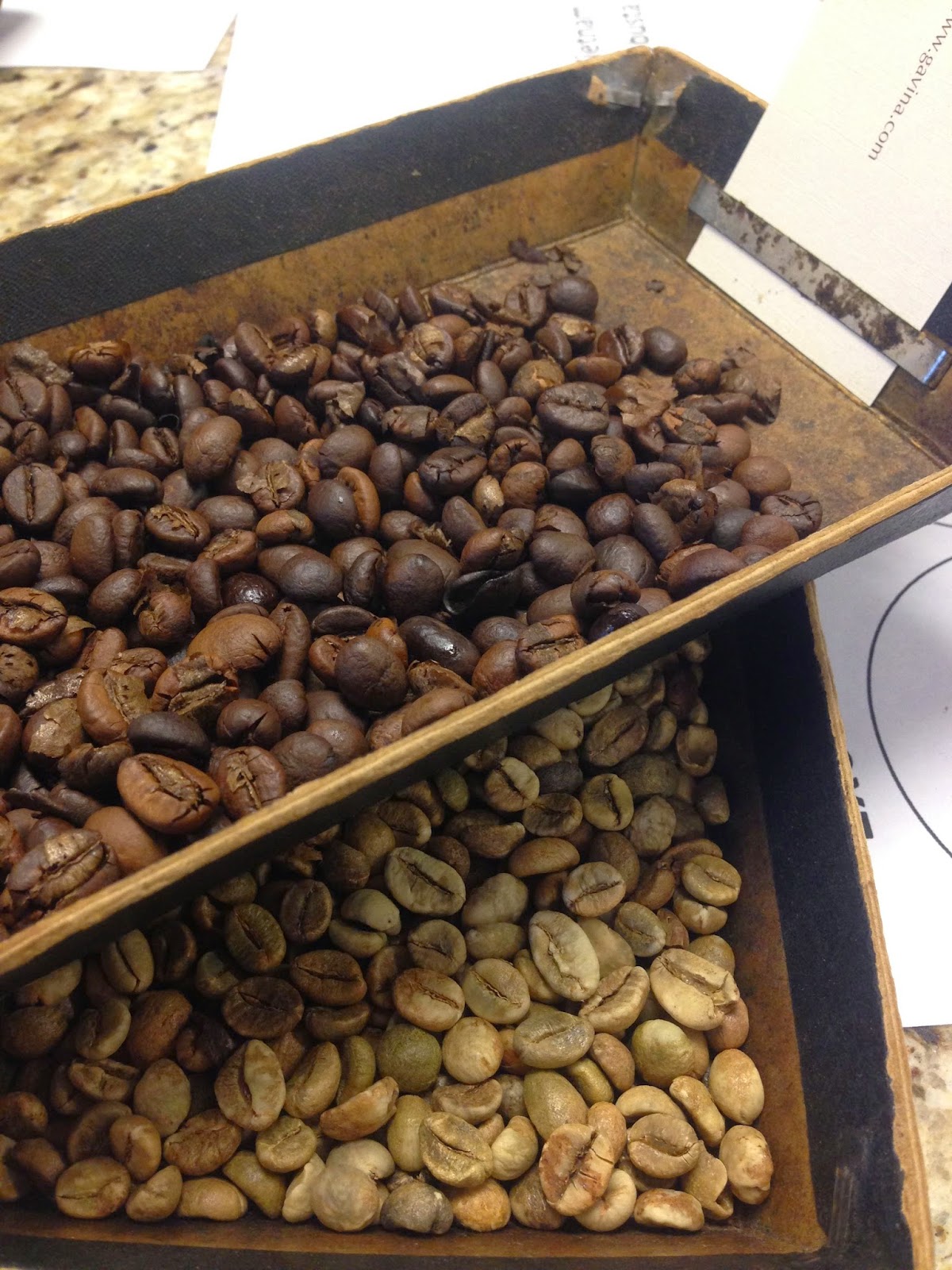 then you pour hot water into each cup and allow it to steep a bit. 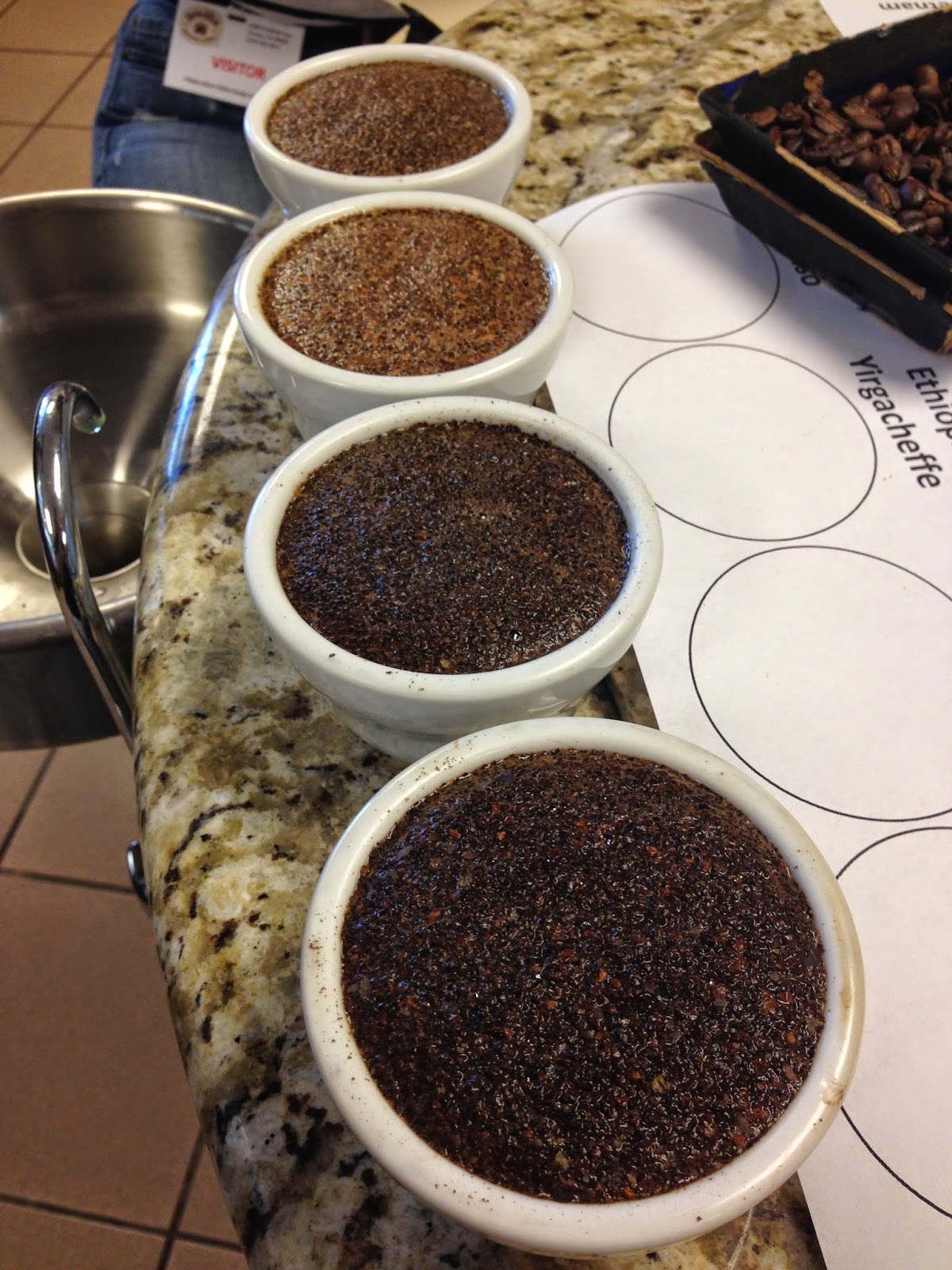 next, you crack the "crust" that's formed on top by the grounds and stir it up a little.  the coffee settles to the bottom and a light foam appears on top.  you then scoop out all of that foam before tasting. 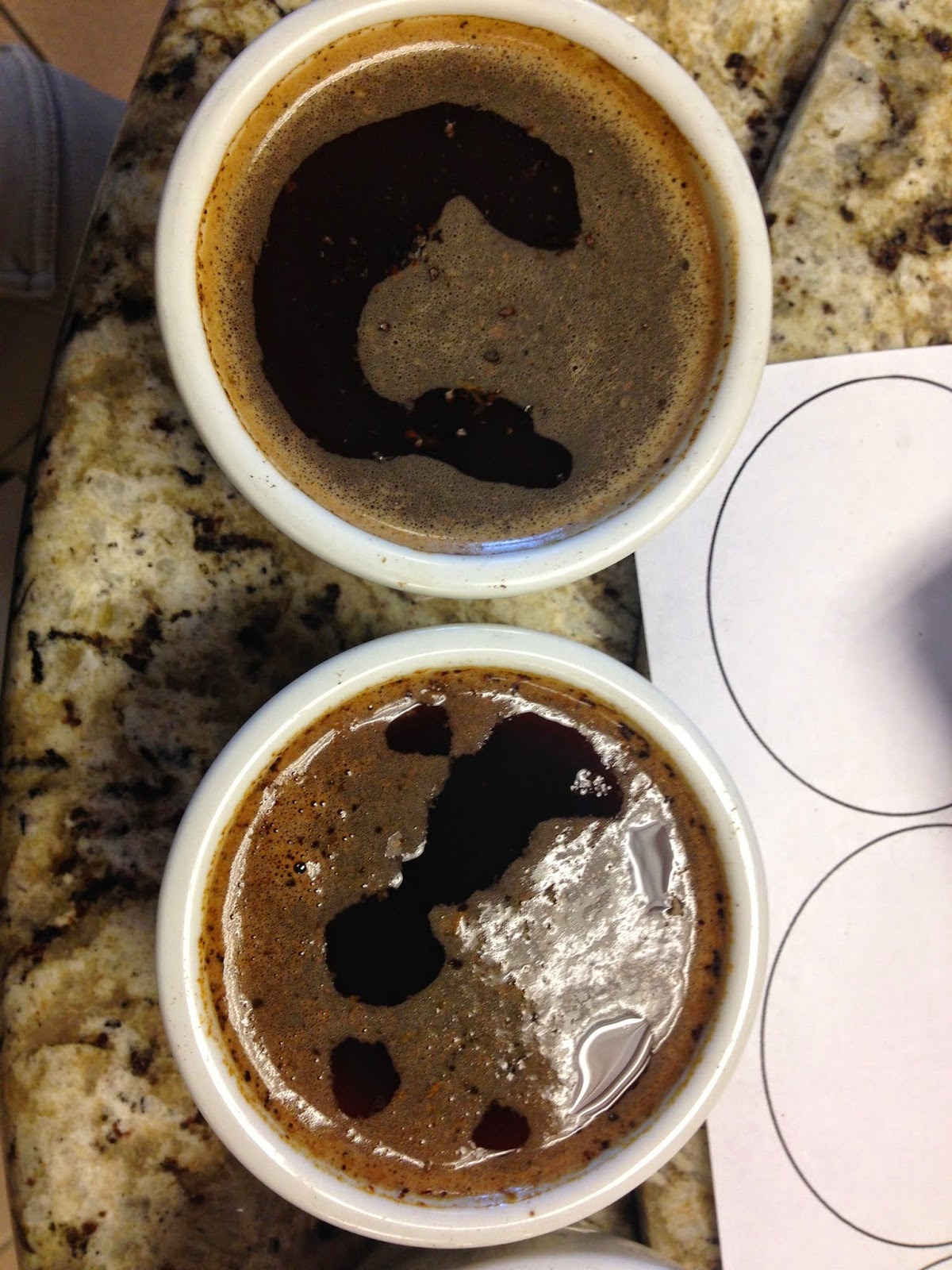 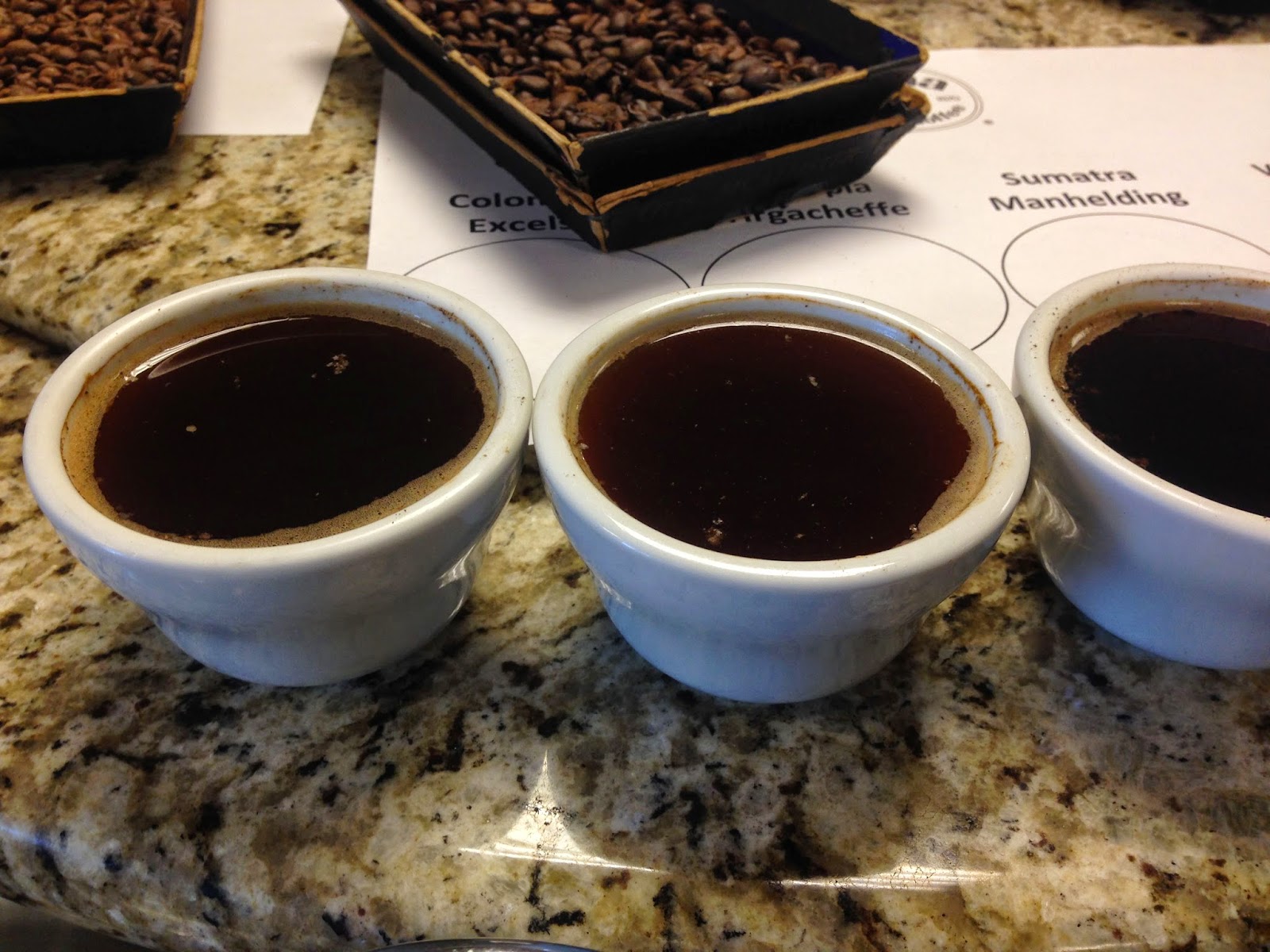 admittedly, i am a foo-foo coffee drinker.  i don't have the taste for black coffee - i take mine with a crapton of cream and sugar, and i like flavored coffees.  i'm a very weak coffee drinker.  but as they explained the differences between each type of coffee, what kind of flavors to look for, and whether they'd be sweet, bitter, mellow, etc., even i was able to pick everything out as i tried each one.  and for cupping, you don't sip.  oh, no.  you use a spoon and slurp it up as fast and loud as you can.  i felt so stupid doing it, but i did it anyway.  and instead of spitting it out into the cups they provided, i just drank it since i hadn't had coffee that morning yet.  these guys drink coffee all day long, and not even because it's their job.  they grew up drinking it, which was totally normal for them.  nowadays, people clutch pearls if they spy little kids drinking coffee, but for them (and for me too, really), it was just what you did.

we got some fun swag bags from both gaviña and mcdonald's: 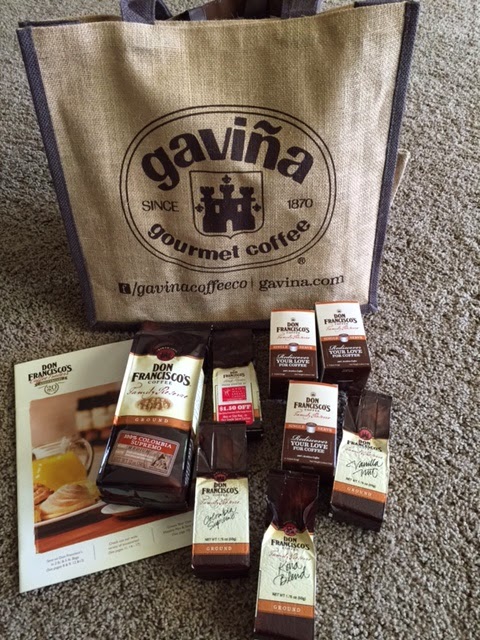 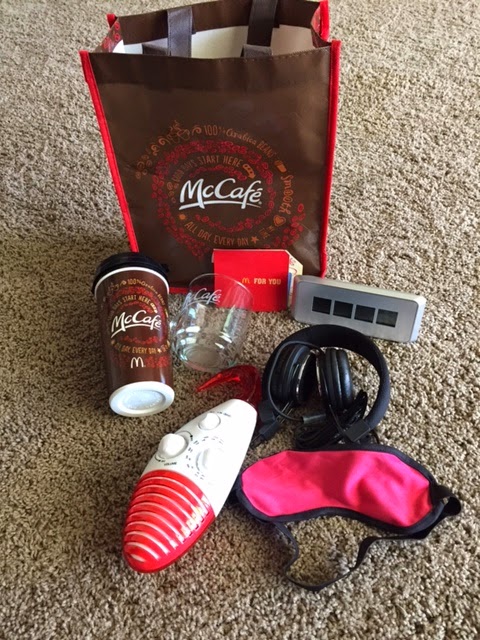 and we learned that in 2015, mcdonald's is going to be rolling out their very own line of single-serve coffee cups.  you know, like k-cups for the keurig.  so if you love mcdonald's coffee but don't feel like rolling out in your pajamas for a cup, you can make your own at home.

you wanna grab a cup of coffee now, don't you?  i kinda do.  thanks to mcdonald's of soCA and gaviña coffee for a really fun and educational morning!
at October 02, 2014

Email ThisBlogThis!Share to TwitterShare to FacebookShare to Pinterest
Labels: coffee is good, mcdonald's