the happiest scavenger hunt on earth

a couple of months ago, the teen and i spotted an ad for something that sounded super fun:  a scavenger hunt through disneyland.  you could form a team with up to four people, and so of course i hit up my usual disneyland partner in crime - delovely details.  mr. DD was our 4th person, and with that team "beauties and a beast" was born.

our designated meeting time was 7:45 in downtown disney, and while i was bright-eyed and bushy tailed, it took the teen a little while to fully wake up and be ready for game time. 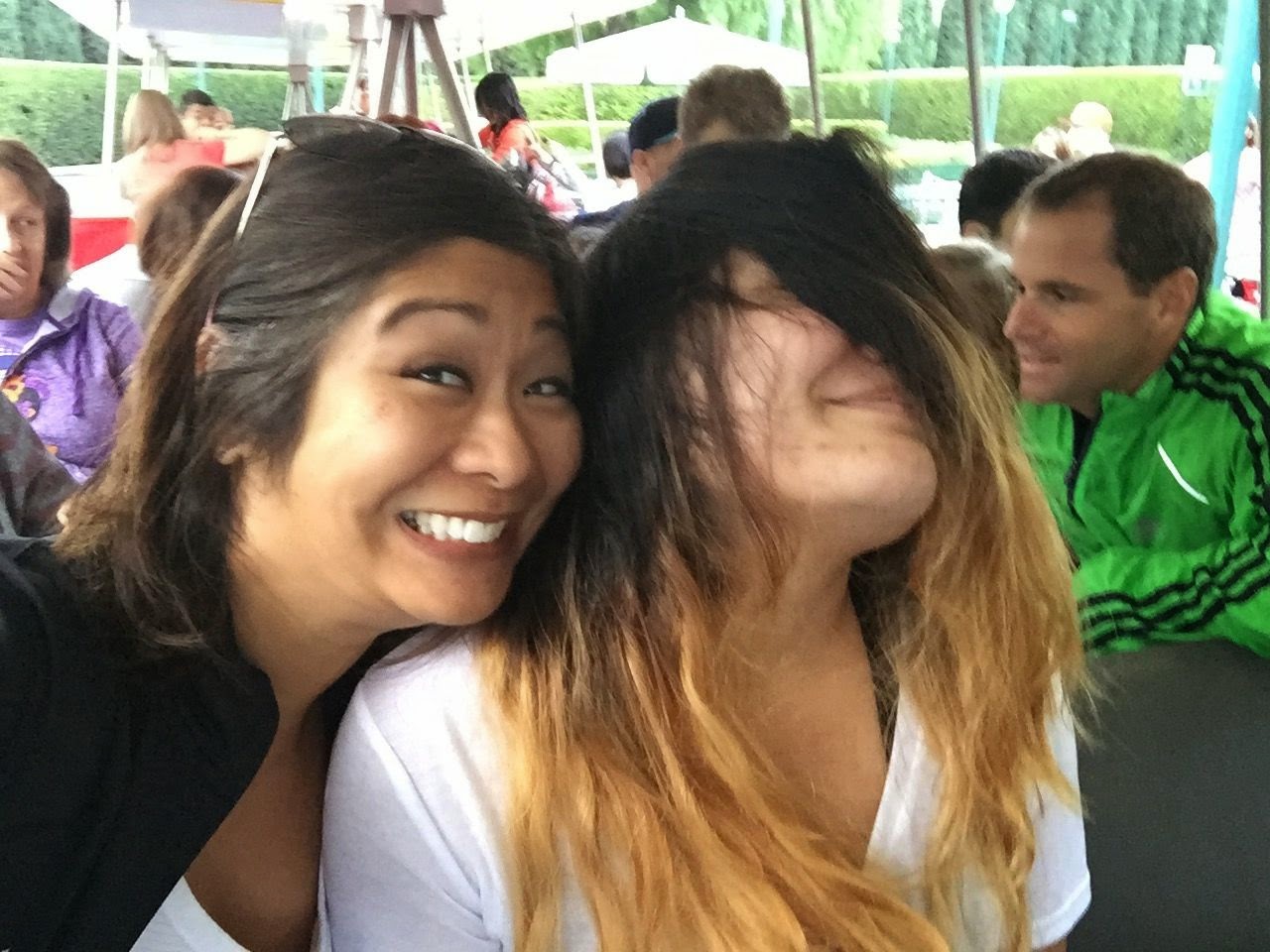 we checked in with one of the race l/a monitors when we arrived at the fountain in front of house of blues and were handed a sealed envelope with our first clue, along with a little button to identify us as players and a card which apparently used us as free advertisement. 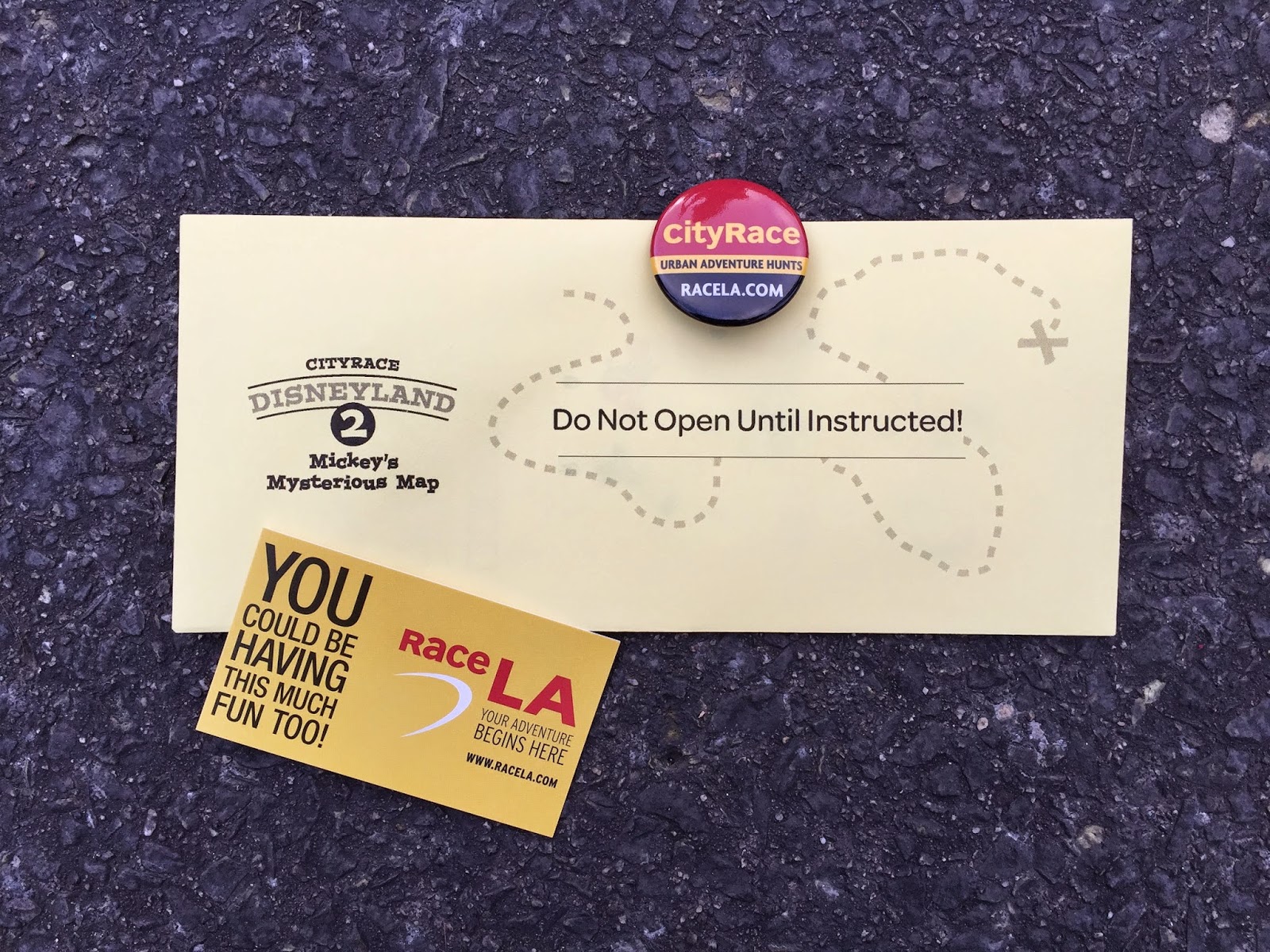 with some time to kill, we stood around chatting and sizing up the competition.  all four of us have a pretty strong competitive streak in us, which was pretty funny as we murmured things to each other like "omg, that girl's wearing TOMS."  "look!  that one's got on boots!"  and "whoa, they've got matching t-shirts on." 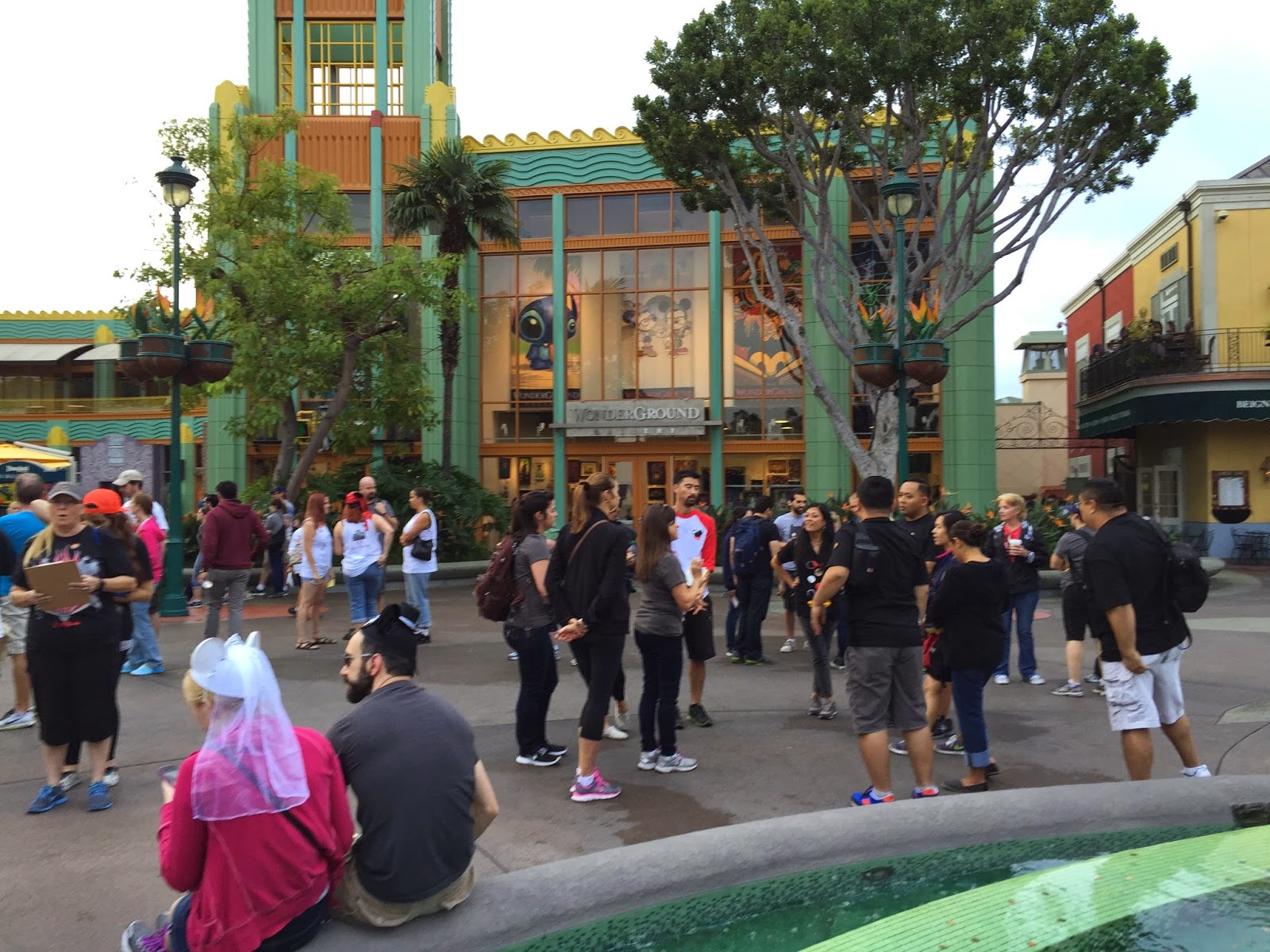 as for us, we were all in workout gear, plus a sparkle skirt for the girls which served as our sad attempt at a costume. 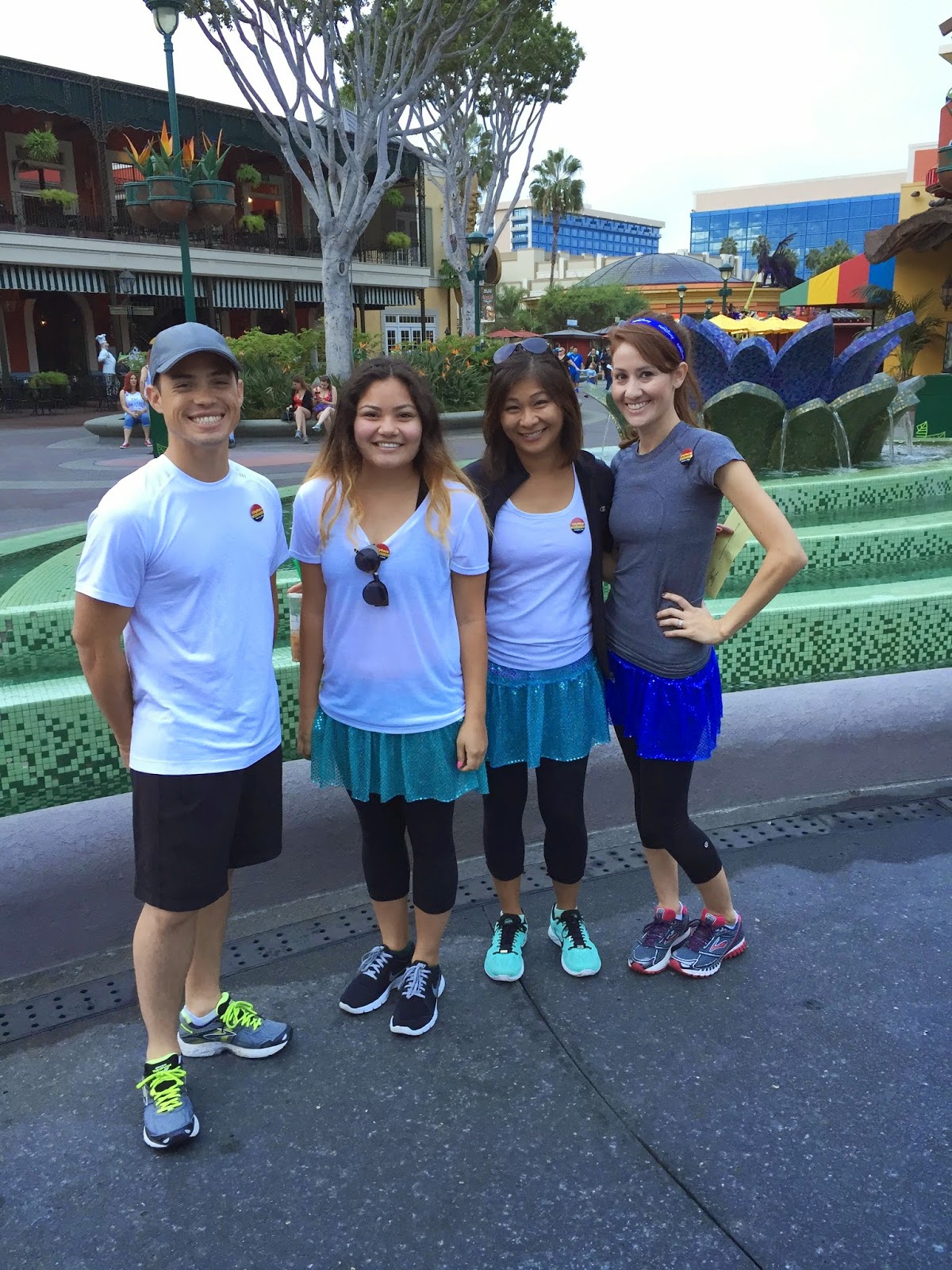 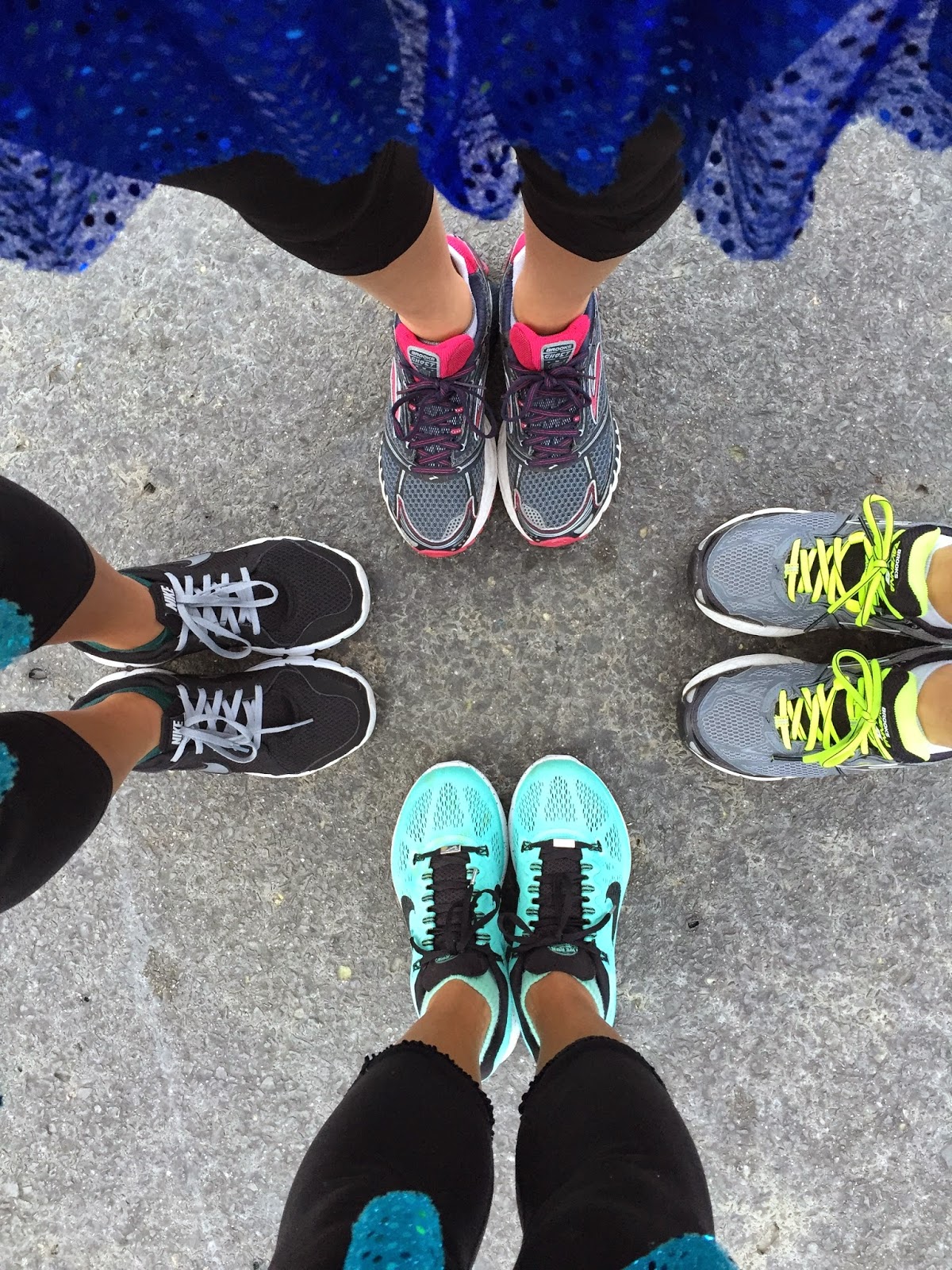 finally, they gathered us all together to make some announcements and to get us started.  it was pretty amusing when the guy in charge said "frontier town" during his spiel, and the four of us just kind of looked at each other.  because, as any disneyland weirdo freak would know, it's FRONTIERLAND.  duh. 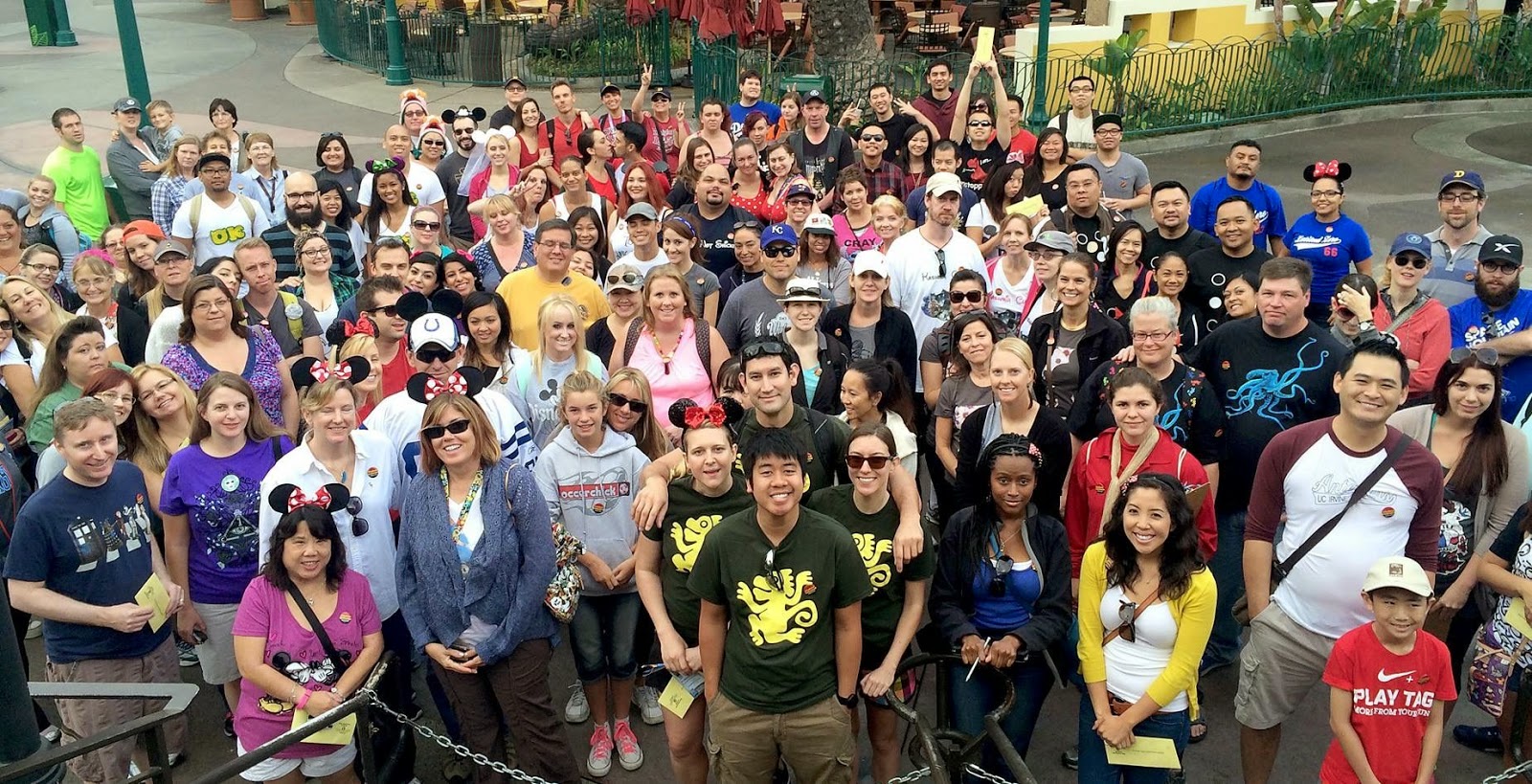 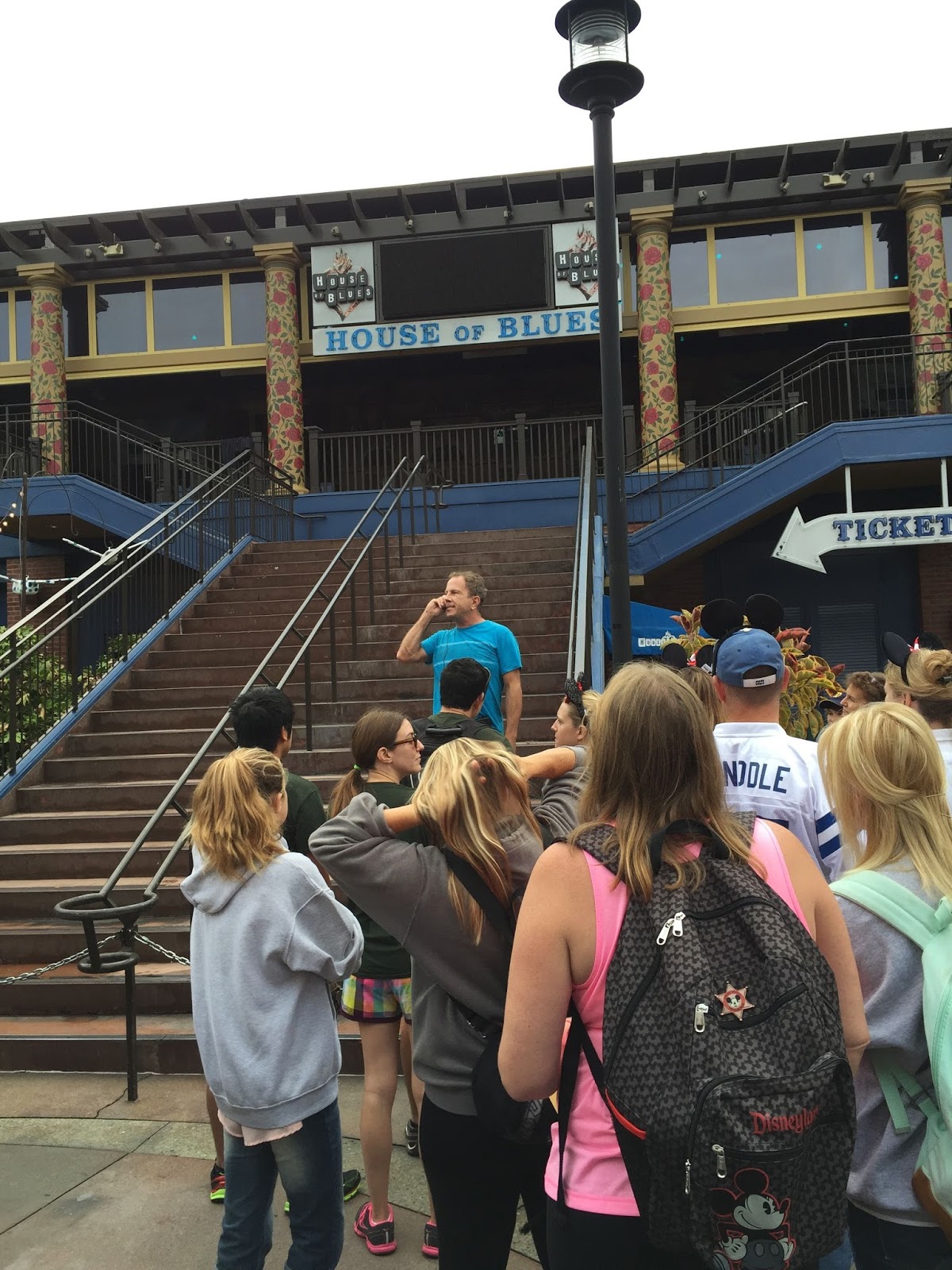 when at last we were allowed to open that envelope, it was a slightly challenging clue that actually took us two tries to get.  and then the race was on to get through the growing crowds and into the park.  luckily, it was just the right time after the initial crowds who arrive at park opening had already gone through, the lines at the gate weren't too bad, and in no time we were rushing through the tunnel. 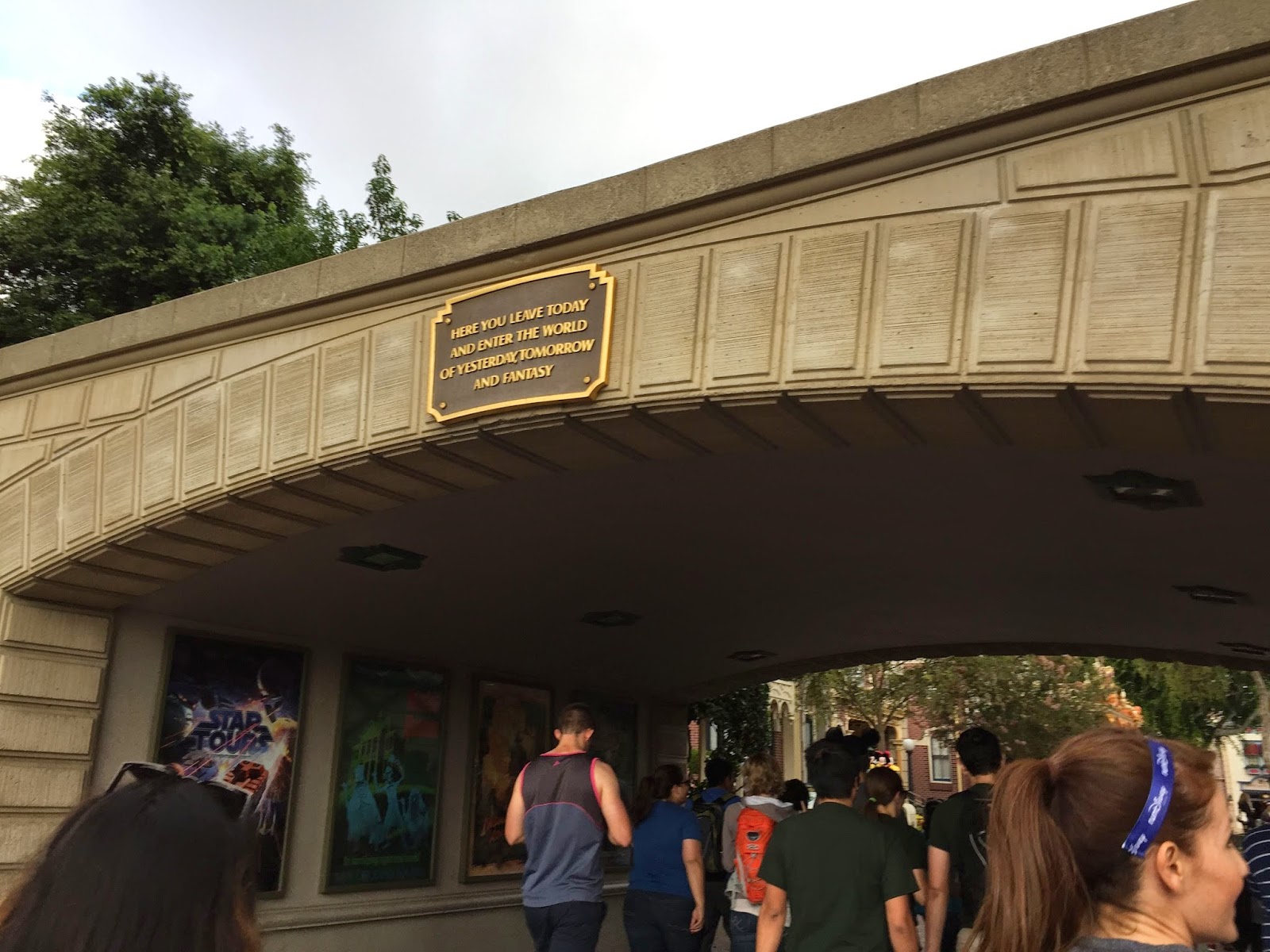 at the first meeting point, we worked frantically to get the right answer which would take us to the next place.  this, too, took us two tries before we got it, which frustrated us all.  the third clue was a little tricky to figure out as well, and our confidence was taking quite a hit.  when we finally figured it out, though, we moved on to another activity that was a tiny bit easier to work with.  somehow, we managed to blaze right through it, scurry to the designated spot, and finally receive the booklet of 40+ clues that we would work on for the next four hours. 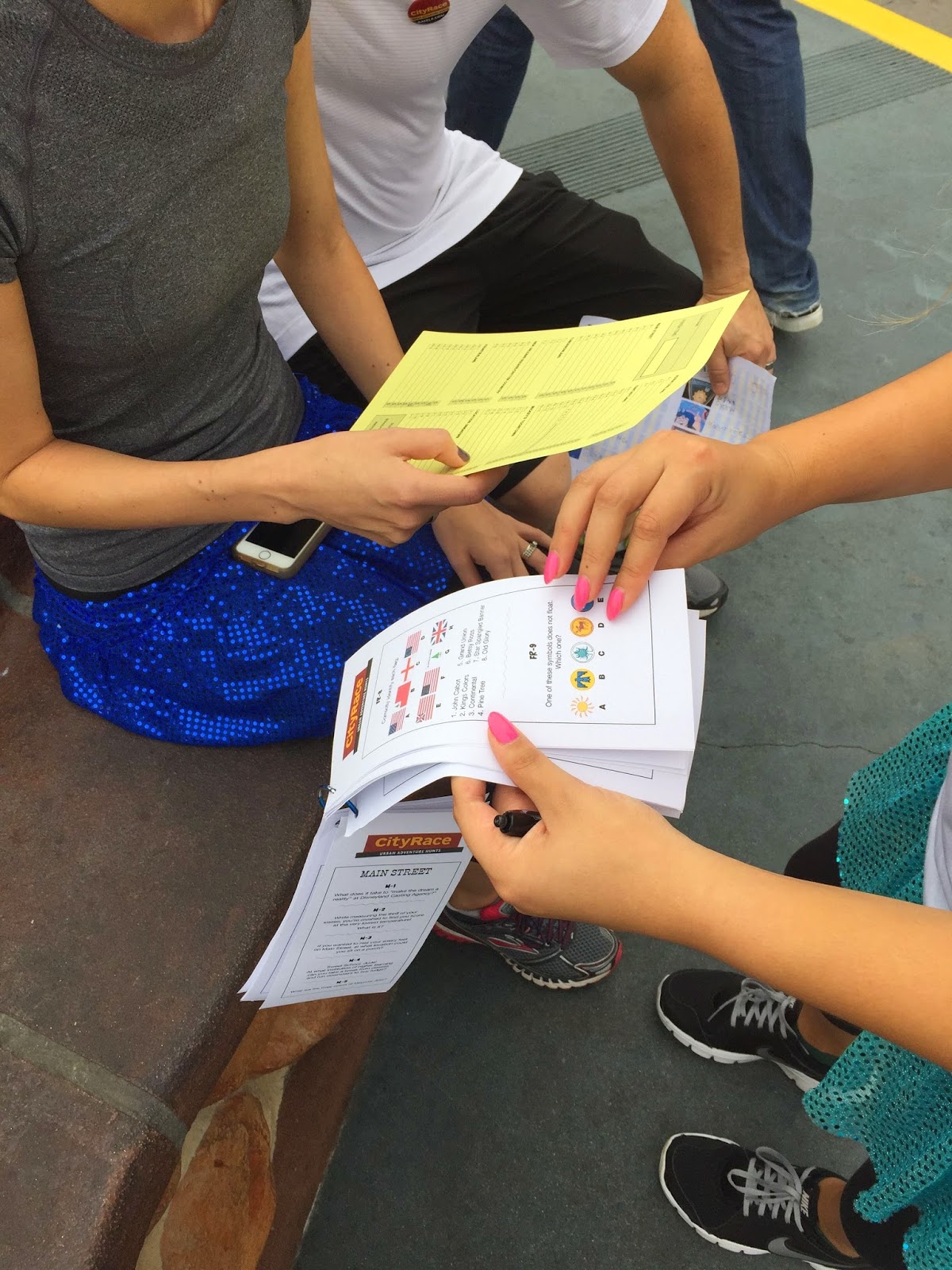 i didn't take a lot of pictures during this part, mostly because we were speeding around and i was sweating my ass off.  plus, i was the one in charge of writing all the answers down and holding the sheet and my phone and trying to find answers didn't really allow for much else.  plus, this race is being held at least one or two more times that i know of, and i don't want to give it away for anyone.  but here's a few fun group pics i can share: 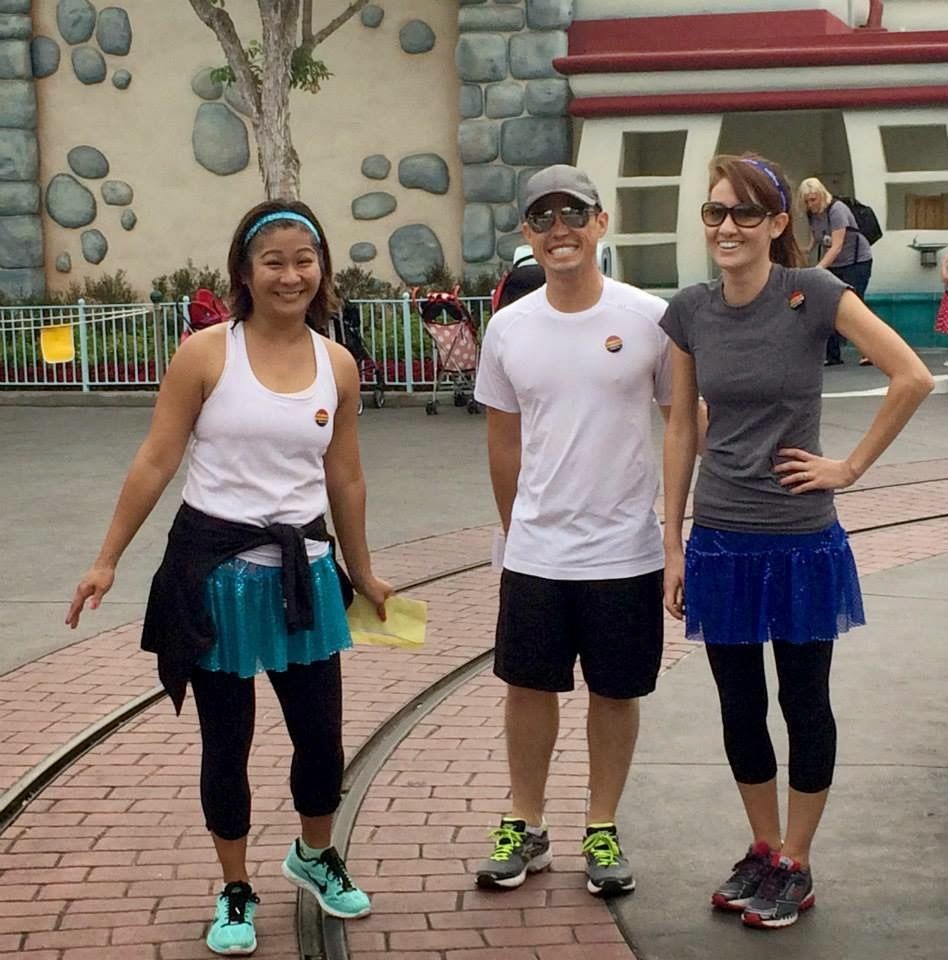 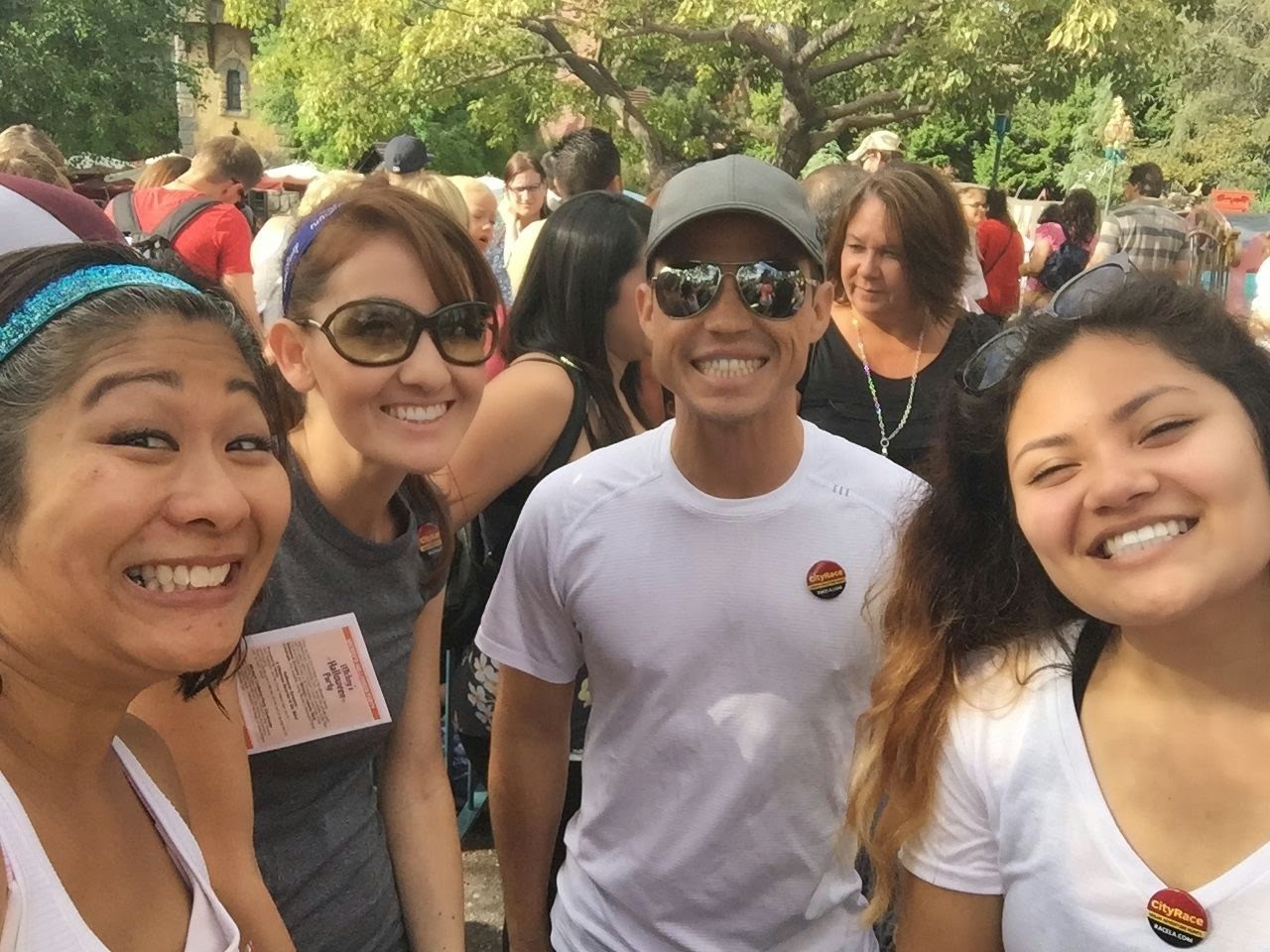 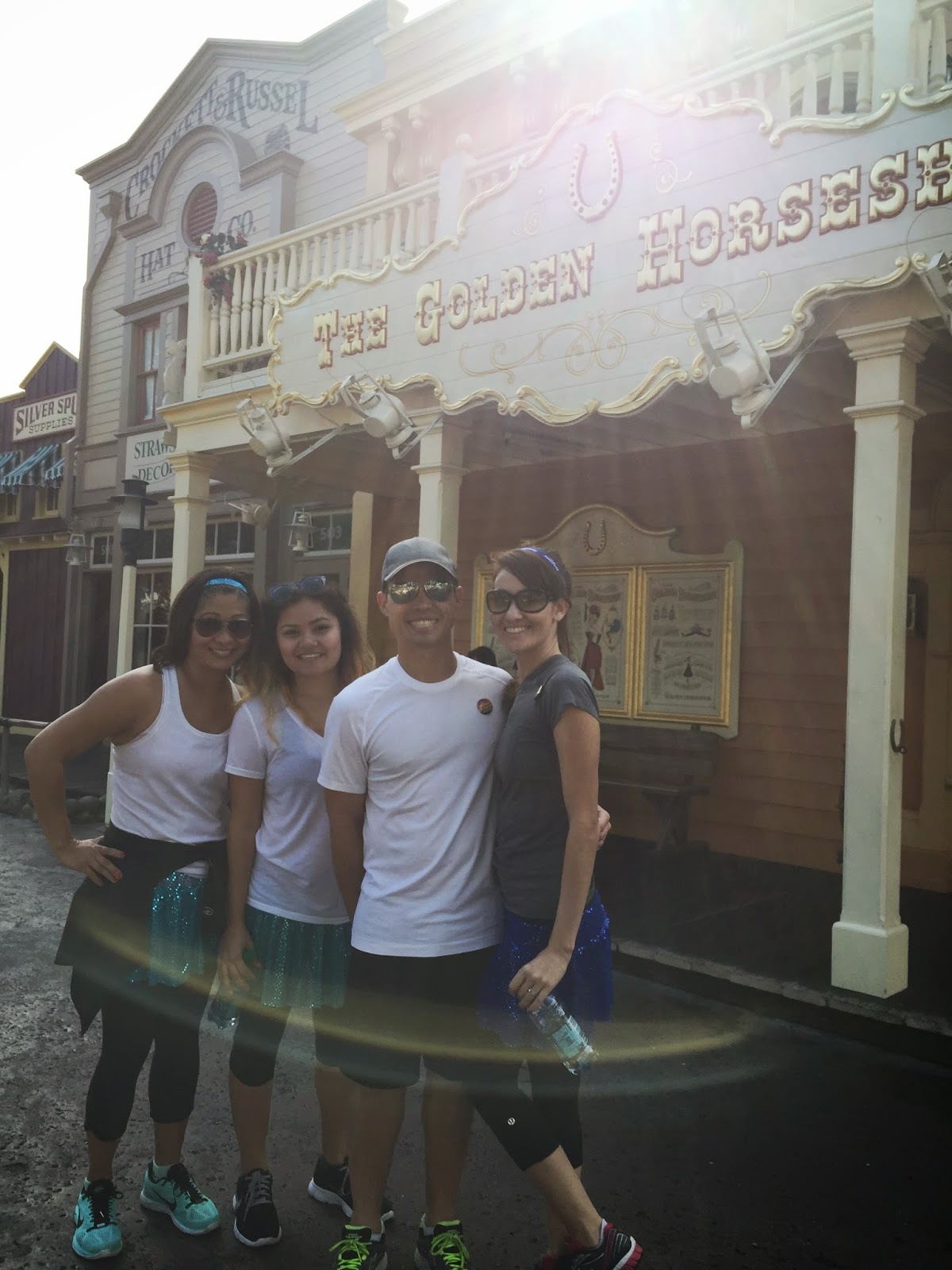 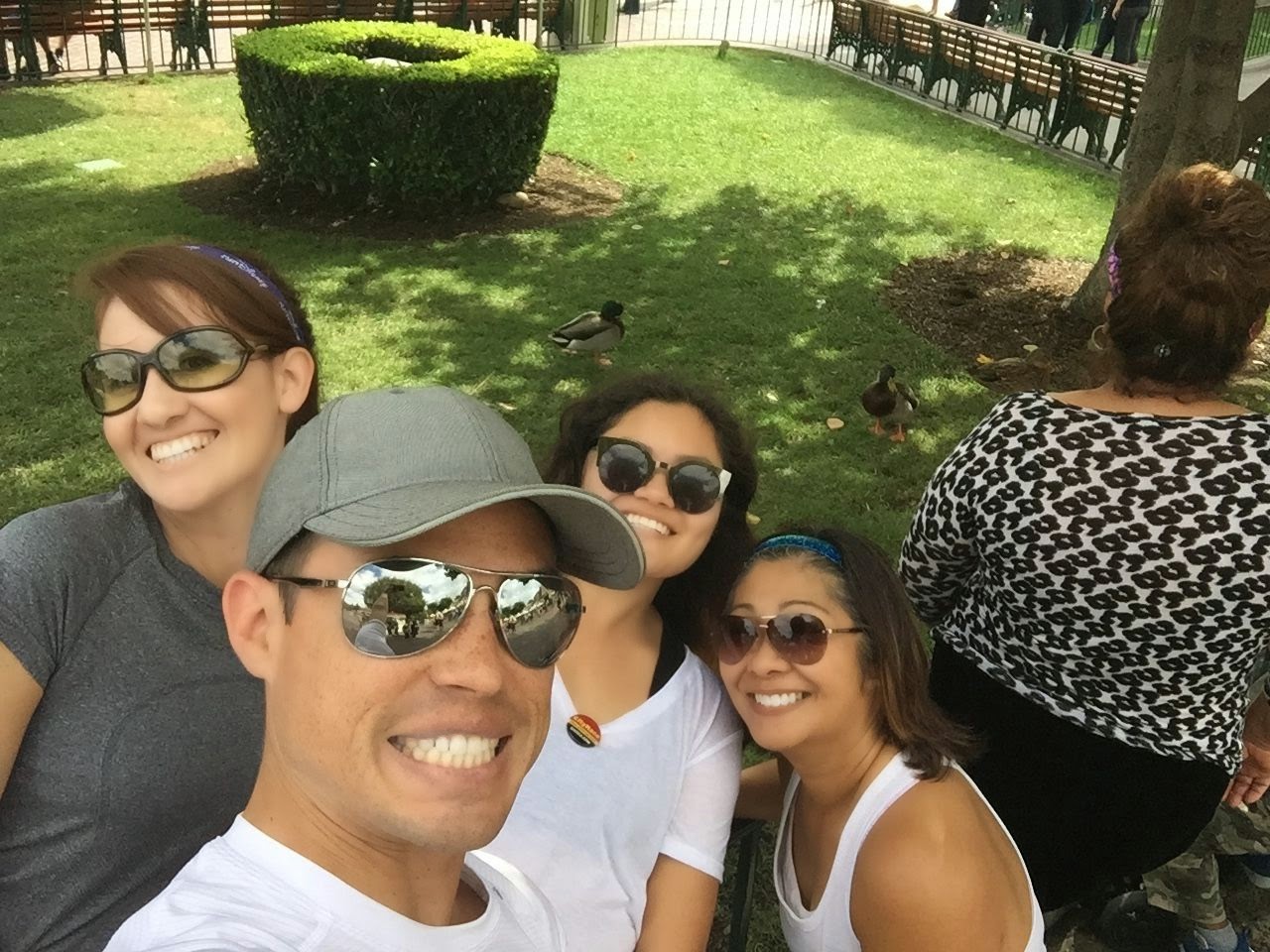 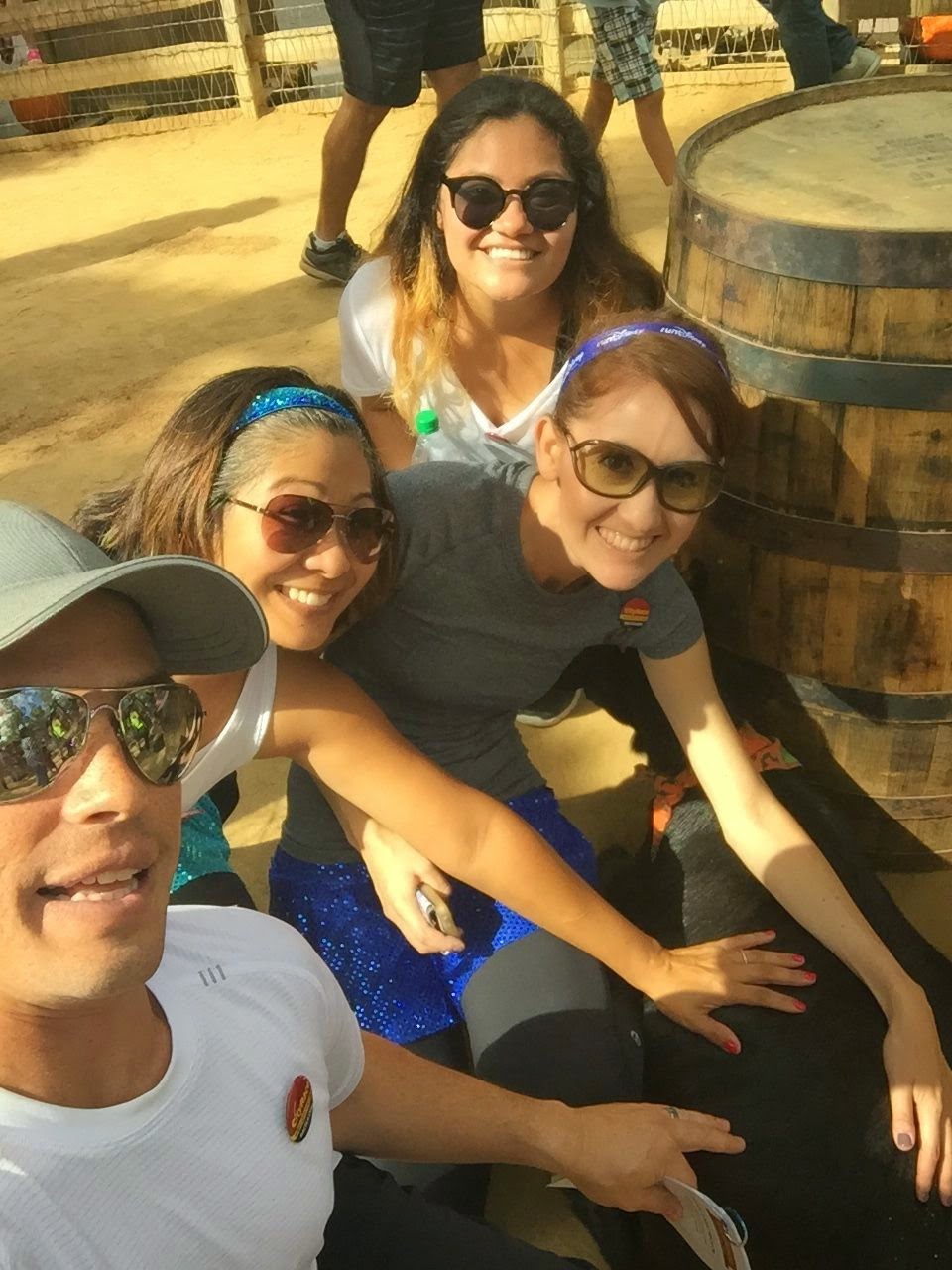 also, in case you were wondering, it didn't take the teen long at all to warm up and start having some fun.  i had a blast just watching her get into it and do everything she could to help get us as many answers as we could figure out. 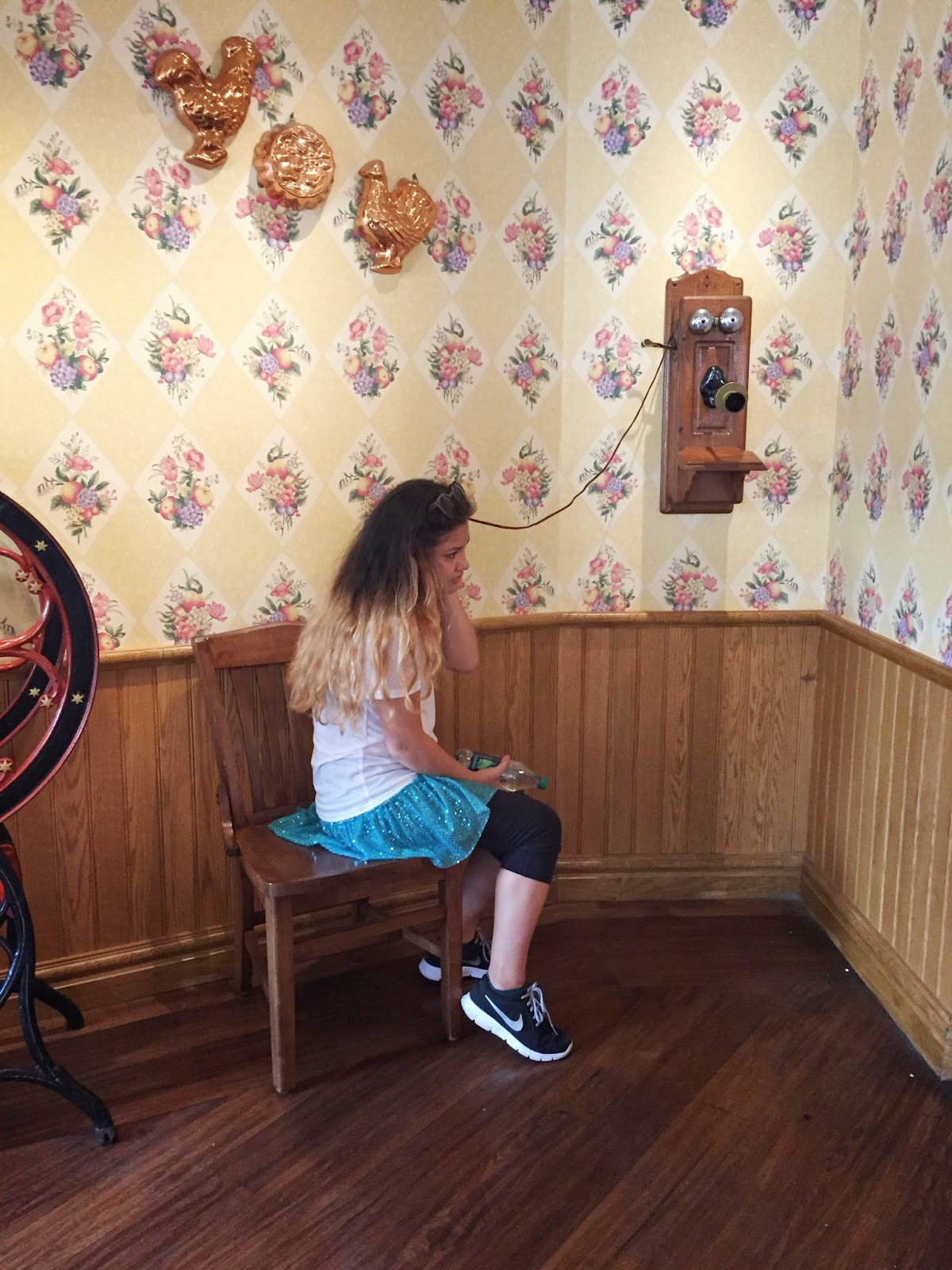 we worked our asses off, ran all around the entire park several times over, and arrived at rancho del zocalo, the mexican restaurant inside frontierLAND, just in time.  after checking in, handing our answer sheet in, and showing the photos we'd taken, we went inside to grab some lunch.  after all that effort without a single break, we were starving. 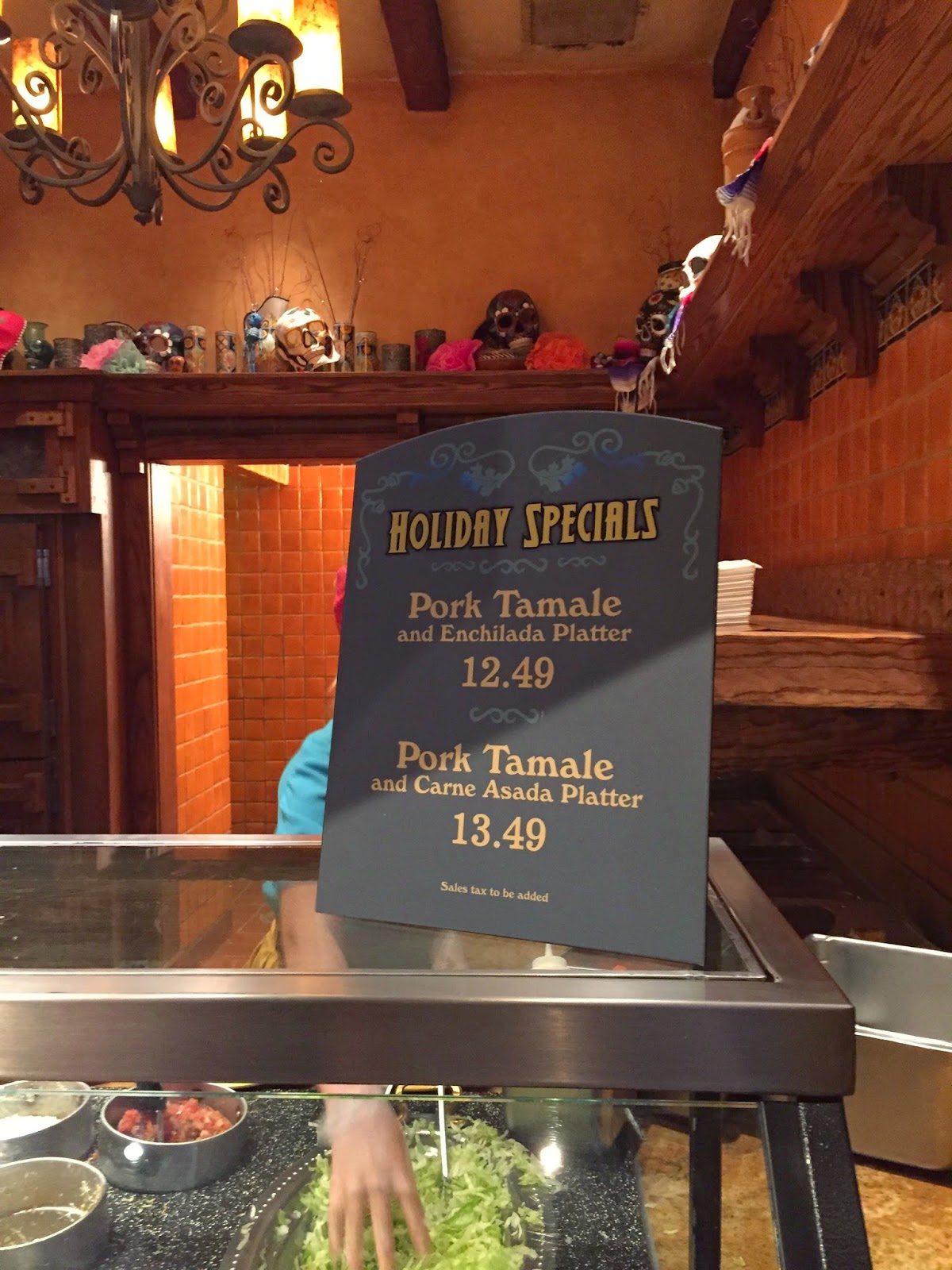 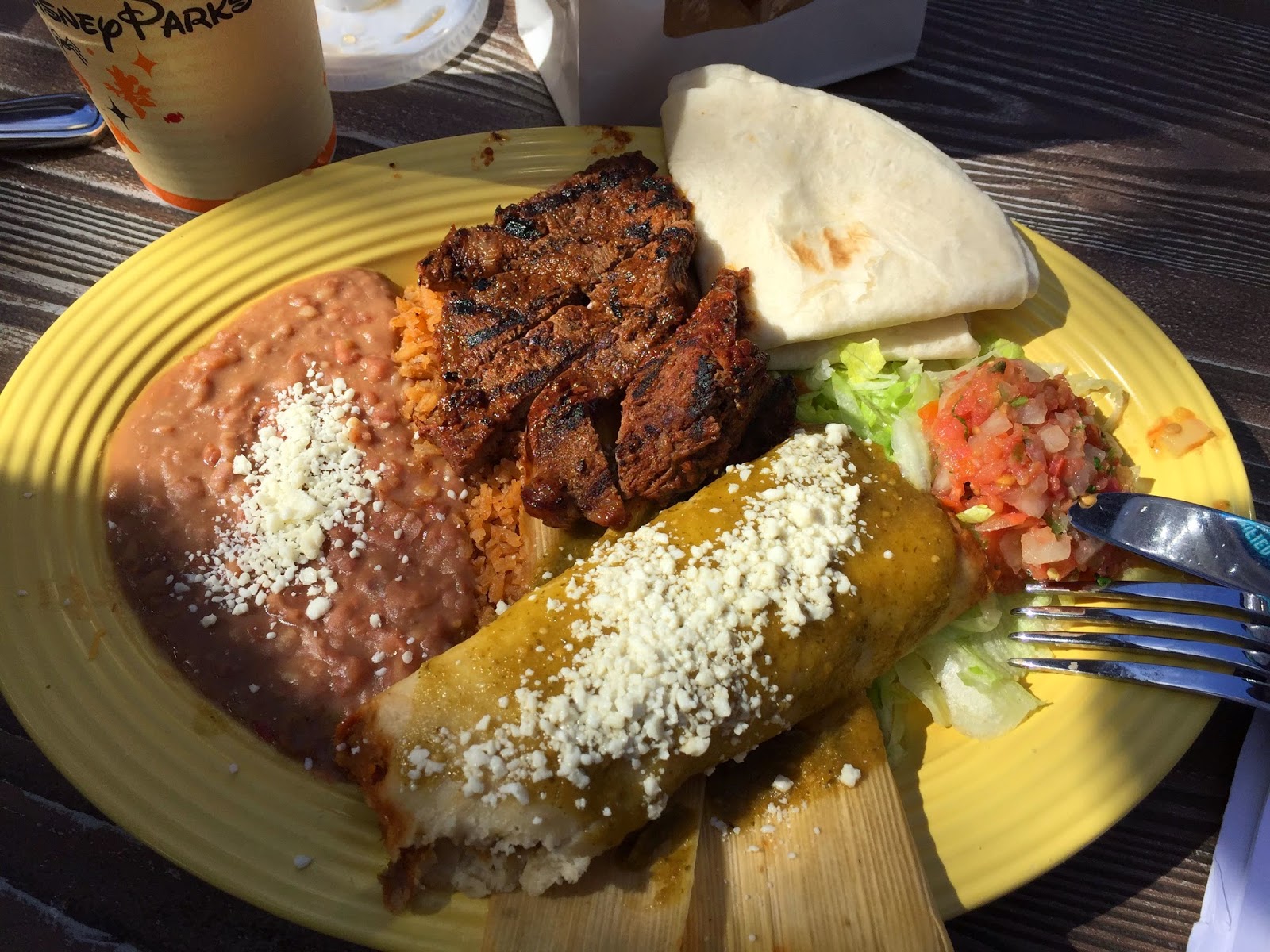 i don't know if it's because i was teetering on the brink of being HANGRY, but that platter was super delicious.  i plowed through it as if i hadn't eaten in years.  and as i finished, the dude put on a microphone and launched right into the announcements and answers.  DD got up to get closer and hear what he had to say, since our table was almost out of earshot. 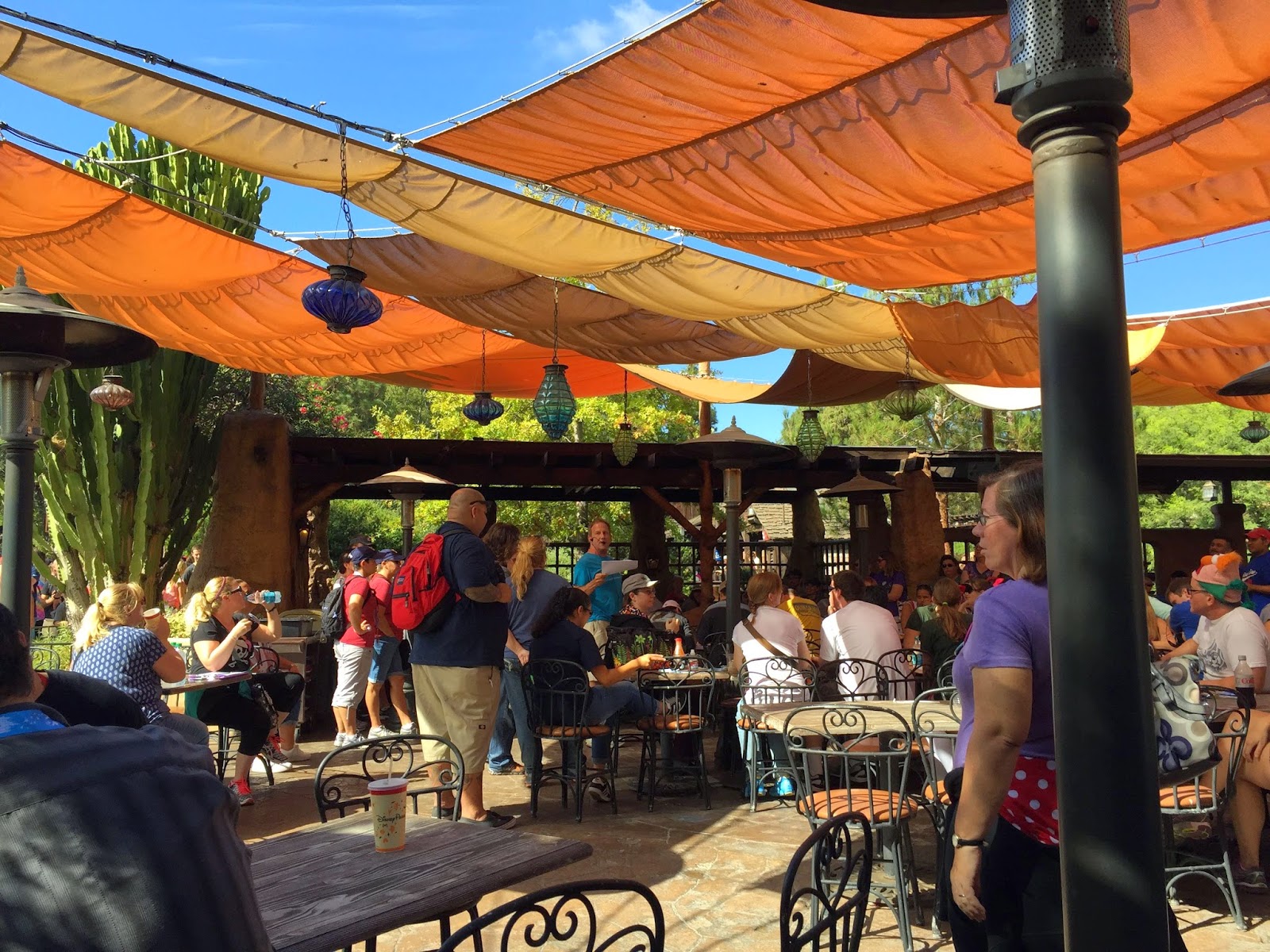 we'd actually done a pretty decent job, or so we thought, of figuring out as many of the clues as we could.  out of 66 possible answers, we'd only left 4 lines blank.  and so we were pretty hopeful that we'd at least placed in the top ten.  but as those teams were announced, we resigned ourselves to just being happy that we'd done it and had a good time in the process.  then they got to "beauty and a beast," and we got super excited before DD was told that someone else had had a team name just like ours.  womp womp.

when she went up to one of the monitors so that we could take a look at our answer sheet and see what our final score had been, it turned out that we had, in fact, placed.  and not bad, either - sixth place! 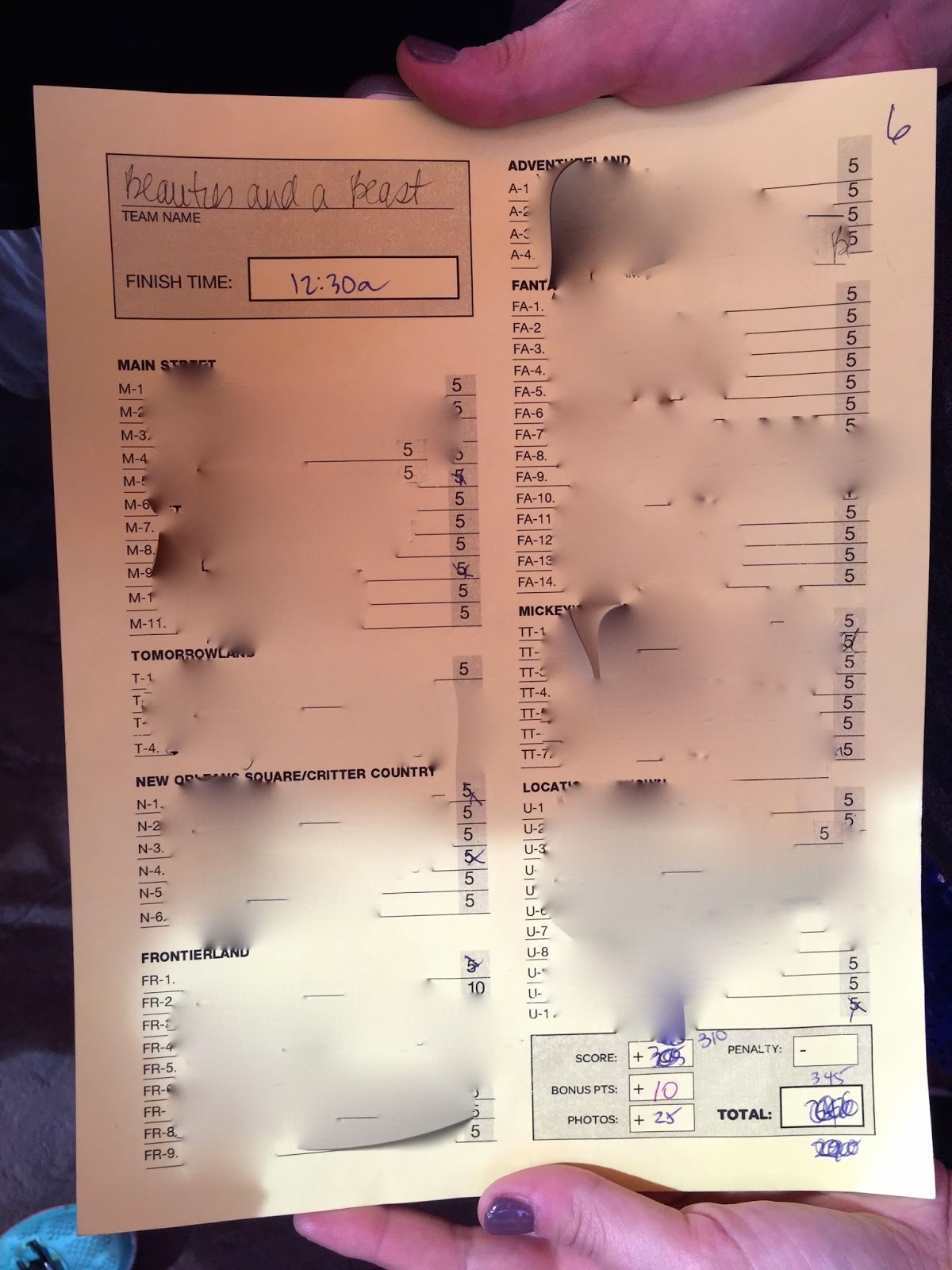 to be honest, i'm still a little confused over what exactly happened.  the way i understand it is, when they announced our team name, someone piped up and said "oh, they left.  they went to go ride indiana jones."  and so the monitors moved on to the next team.  when DD approached the person who'd said it, he just shrugged and said "oh, i was just kidding."  WUT.  who does that kind of shit?  sore losers, that's who.  like this dude right here: 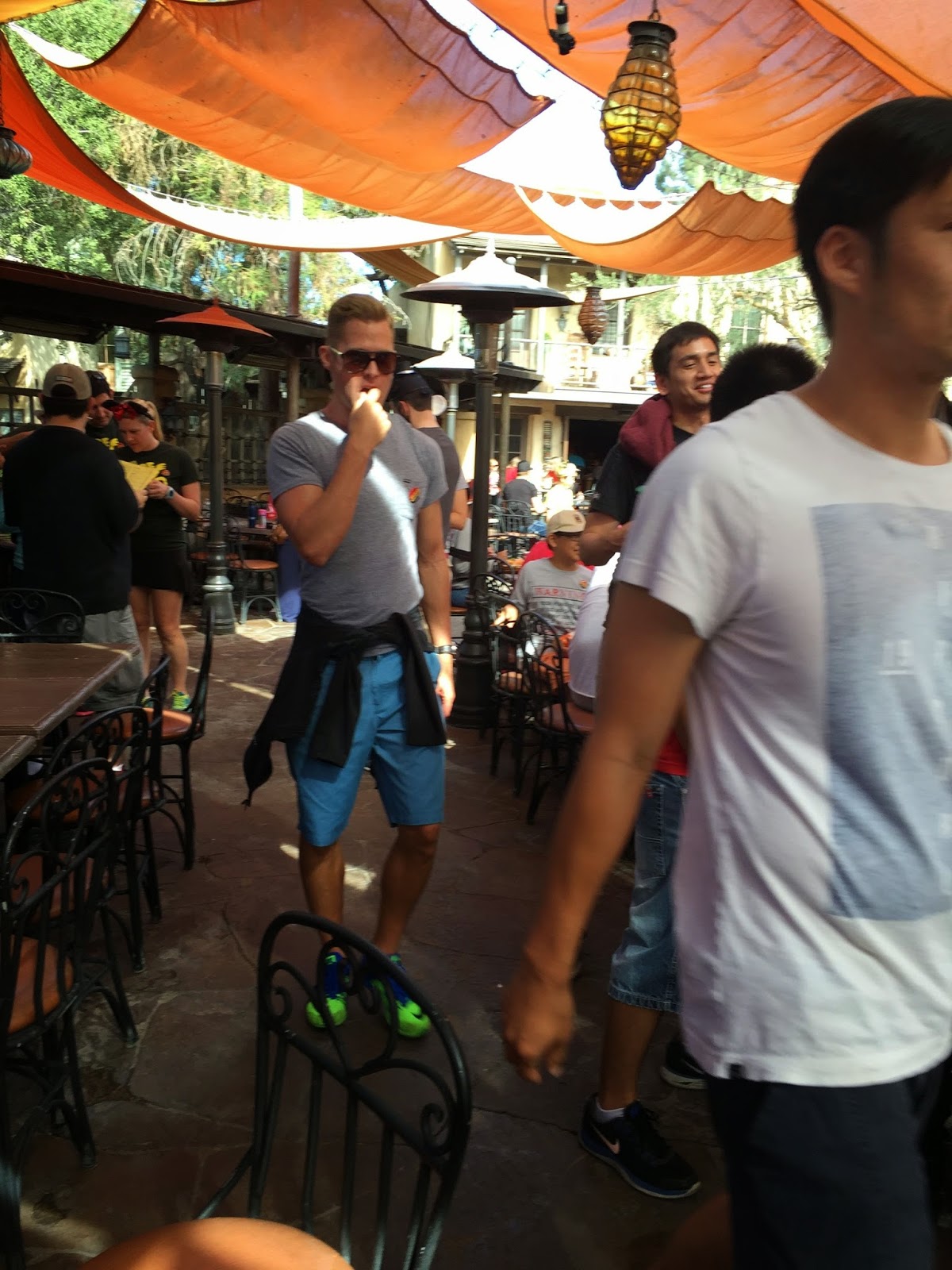 he and his teammate were having trouble locating their answer sheet, apparently.  although what made it even worse was when we approached the guy in charge and he made a bunch of excuses, blaming us for not listening, and just pissing us off even more.  a tip:  if you're running an event like that and someone approaches you with an issue...apologize and own your shit.  don't try to put it on anyone else.  a sincere "i'm really sorry that happened" goes a LONG way.

in any case, we took a group photo that they said was going to go on the website (although we didn't really care at that point): 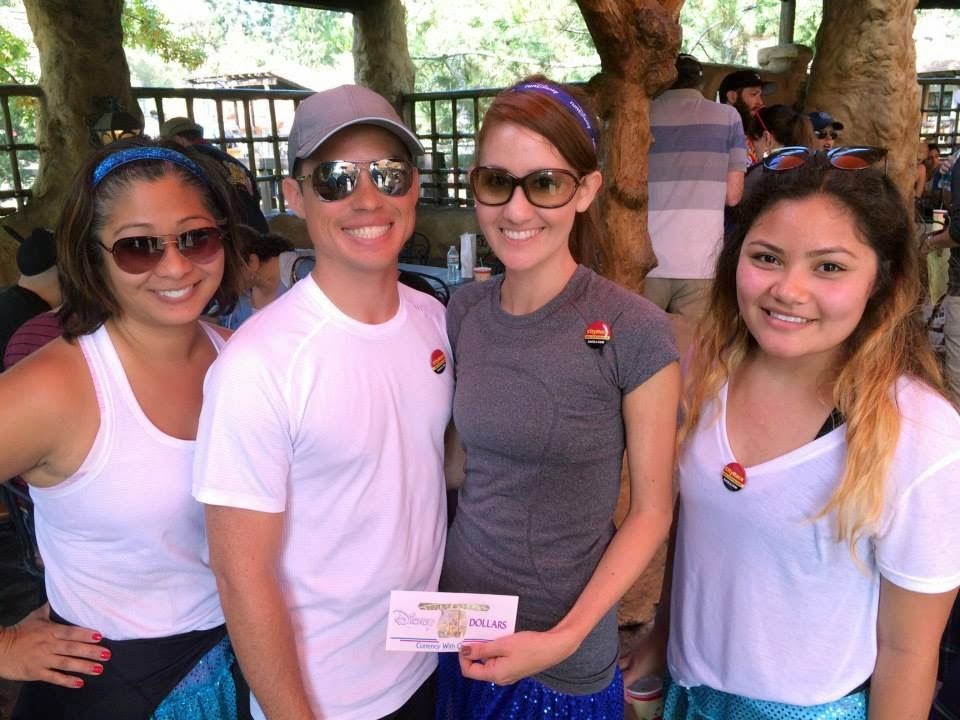 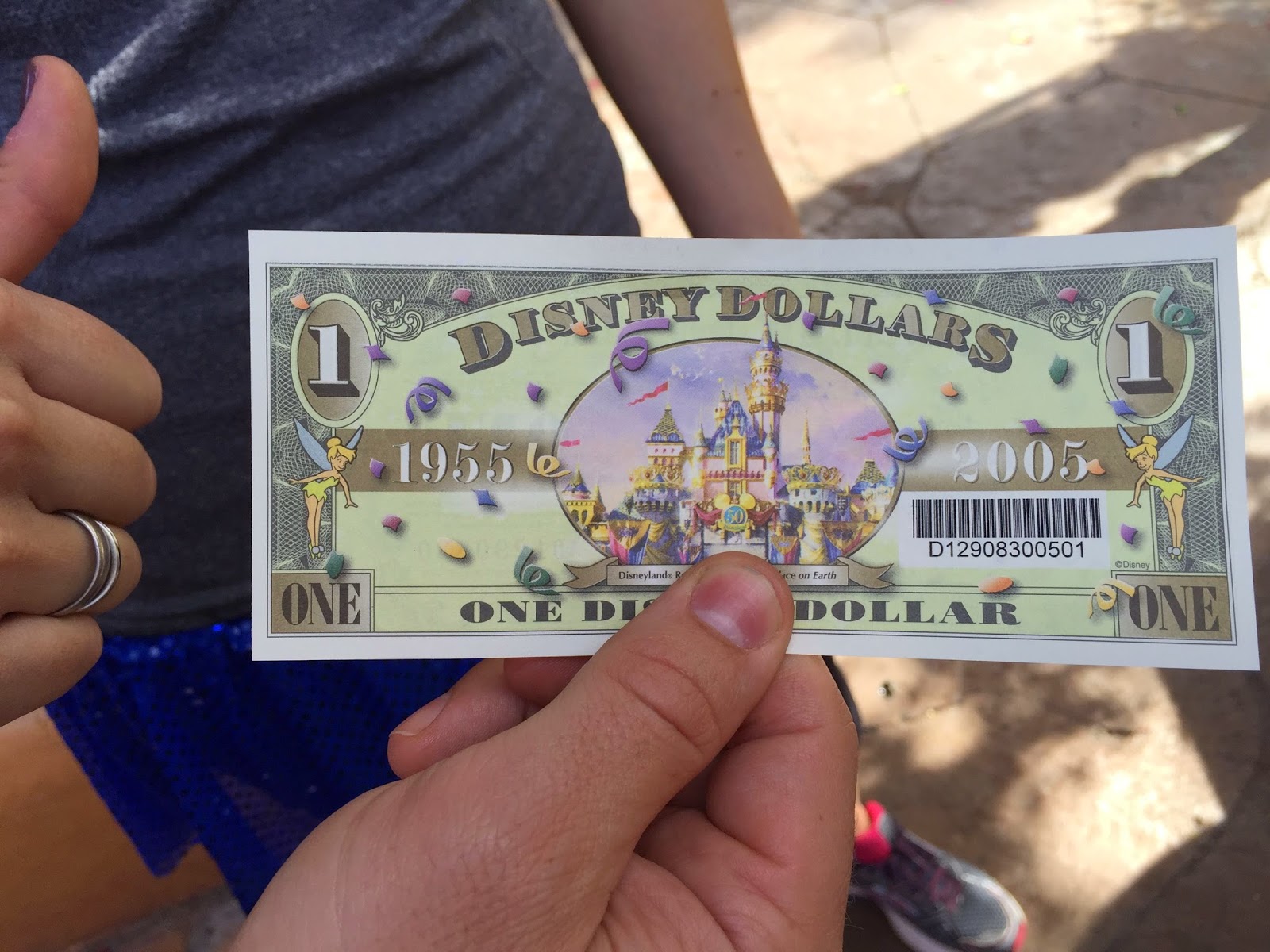 yup, that's right.  ONE DISNEY DOLLAR.  i mean, what the hell are we supposed to do with that?  cut it into four pieces?  i have no idea what the top prize was, but i sure hope it was better than this.

so would i do it again?  i don't know.  it really was fun to go through the clue book and gather all of the answers.  we got to really examine the park and notice things we'd either never bothered with before or refreshed our memories on stuff we hadn't paid attention to in forever.  and it renewed my appreciation for disneyland's attention to detail.  the last 15 minutes of the game might have kind of sucked, but overall, yup - it's still the happiest place on earth.

plus, as DD said, 6th place is a pretty respectable showing - especially out of 58 teams.  we come across as disneyland-smart without crossing over into disneyland-freaks territory.