so i've been using paypal for a really long time. like, i think my account is at least ten years old. i probably opened it back when i first discovered ebay. that was a loooooong time ago.
anyway, when i saw them post this on twitter: 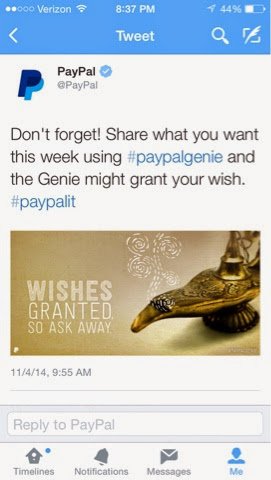 i remembered that my friend nanette had gotten lucky last time they did this and won some gift certificates to have some quality time with her BFF. so i figured, what the hell, and i posted this: 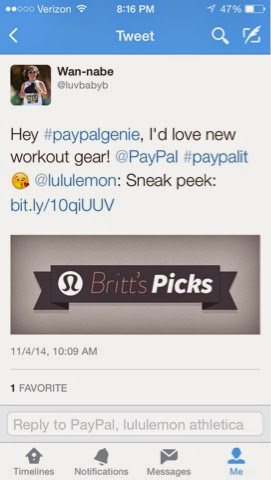 because, why not? i admit i also tried to be strategic about what to ask for by picking a retailer that i knew accepted paypal as a form of payment at checkout. i don't actually know if that helped my chances or not, but i was pretty excited when not long afterwards i received a notification that paypal had favorited that tweet. and right after that, another notification that they were now following me on twitter.
then even more good news via direct message: 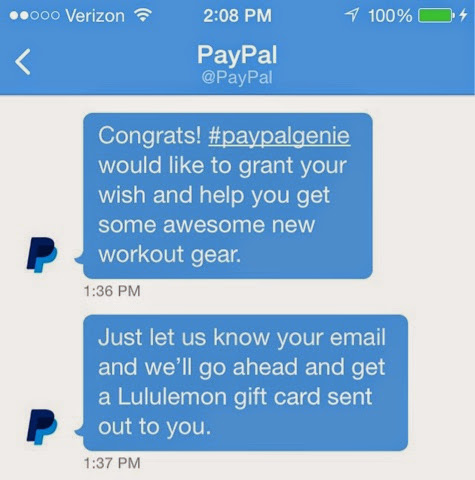 pretty awesome, right?
later in the day i checked my email and found that paypal had indeed granted my wish in the form of an e-gift card from lululemon. i thought, "sweet! how cool is that?" as i opened the email to check it out. i figured it'd probably be enough for a new top...maybe a nice new pair of pants.
so how excited was i when i scanned through and saw this:

HOLY CRAP. this is the best genie EVER.
they created this cute little announcement that they tweeted out: 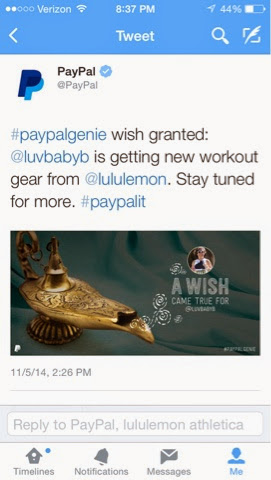 love, love, love! and now i'm for sure a paypal customer forever and ever. after all, one of the surefire ways to win my heart is most definitely via a shopping spree...and to lululemon, no less!
that tweet has gotten a lot of favorites and retweets, so my notifications have been blowing up. i did snicker at this one, though: 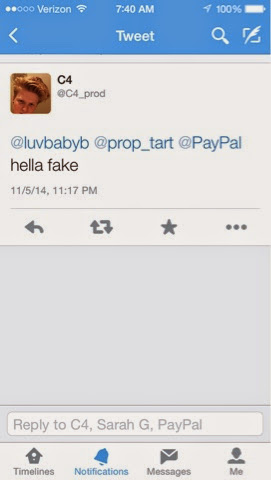