so, yeah...2014's journey towards a spot on that insanely sought-after disney moms panel is over.  the announcement went out that the "yes" or "no" email notifications were going out yesterday, timed right while i would be sweating my ass off in barre class.  i actually managed to forget about it as i worked it out, but the second i got out of there you know i snatched up my phone right away to check.

in all honesty, i wasn't really stressing about it like many other hopefuls were doing.  i knew that my video sucked, but i had a glimmer of hope that my answers to the essay questions would be enough.  and i really, really did believe that i was totally okay with not going through to the next round.  i figured, hey - either they liked my submission or they didn't, and that was that.  i tried going all out with a kick ass video last year, which didn't get me anywhere.  so this year, i went in the completely opposite direction and did a simple 70-ish second clip of just me in front of a blank wall - no music, no tricks, no costumes.  and in return, my email came bearing bad news with no graphics, no pretty fonts, no magic.

and on my way home, i happened to glance over and saw this: 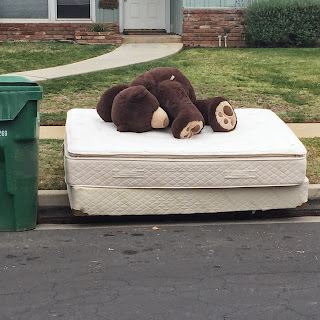 is that not the saddest thing you've ever seen?  poor mr. bear.  rejection, man...it sucks.

but to end it on a happy note, the process was just as much fun as it had been last year.  waiting for applications to open, then the anticipation of those round 2 notification emails, answering the round 3 applications, and then waiting for the next step - well, it really was fun.  my friend gary out in disney's social media department constantly tweeted out cute little clues and words of encouragement, and gave us as much information about what to expect without giving away too much.

and...there's always next year!  i'll just keep trying and maybe one day, that pixie dust will reach me too.
Labels: disneyland i'm a loser baby wan likes to win