it's fun to get a little crazy

the bean's school does all sorts of fun spirit days throughout the year where the kids get a chance to break out from the everyday uniform and show a little of their personalities.  we've had silly sock day, mismatched shoes day, and days when they could wear specific colors.  this week, it was crazy hair day.

after perusing a couple of pages' worth of google images, i decided on something i thought would look cool - little buns modeled after knots i'd seen posted on instagram.  it looked easy enough, and the bean's hair has grown out considerably since we got it cut earlier this year.

except of course, she had her own ideas.  "mommy, i want a little braid next to a little ponytail and then behind that a little ponytail and a little braid and just keep switching all the way down."  ugh.  and when i repeated it back to her to make sure i had it right, well, i didn't.  even though i'd basically said exactly what she'd told me, i was WRONG.  we went back and forth a number of times until we were both completely frustrated, and by that time there was only half an hour left until we needed to get out of the house.  and she wasn't even dressed nor had she eaten anything yet.  double ugh.

so i started working based on her instructions.  but then she didn't like how the ponytails were hanging.  apparently, they weren't dangling in precisely the way she'd visualized it.  and so i decided to try out the knot i'd originally suggested on one of the ponytails.  she caught a glimpse of the finished knot and praise be to all that is holy, she actually liked it.  i continued to create the knots with all of the ponytails we'd formed around her head, and then asked her if i could do something fun with the braids that were also apparently guilty of mis-dangling.  i crossed them and used colorful hair elastics to secure them into place, and then somehow managed to twist the ends into another knot, and this is what it all ended up looking like: 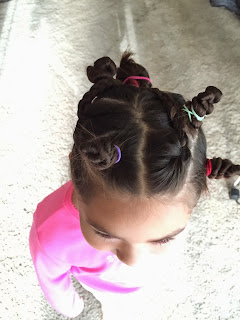 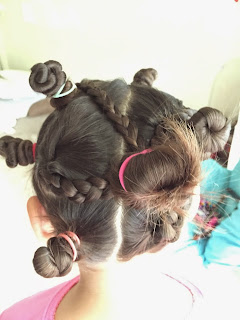 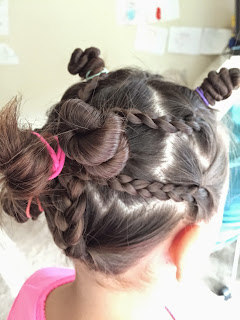 once i had her dressed and armed with a cupful of carnation instant breakfast, we headed outside so i could spray it all down with some silver glitter hairspray.  i took a picture of it, but it doesn't look right in the shot - although it was pretty and shiny in real life, in the shot it looked like a headful of dandruffy dust.  but she was very pleased with it, and that's all that counts. 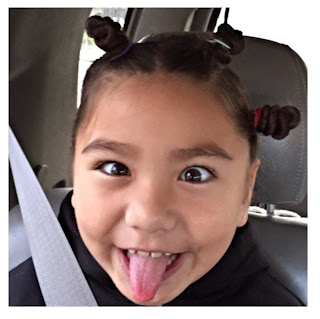 at school, we saw all sorts of crazy 'dos from multiple ponytails and wacky hair accessories to spiky heads sprayed with leftover halloween hair dye.  at first, she was a little worried that people would laugh at her hair, but as soon as she saw all the other kids with done up 'dos, she relaxed and shyly thanked those who came up to tell her that they liked her hair.

later that night, we took down the knots and braids, leaving her hair all wavy and pretty.  she tried to convince me to let her put on a shower cap so she could keep the curls, but we had to wash all that glitter out.  sorry, charlie. 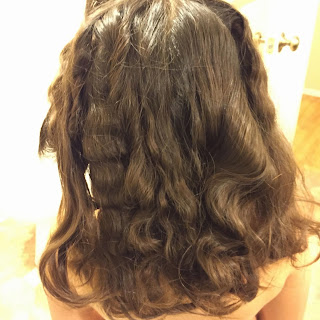 in fact, she ended up liking those knots so much that we did more of them the next morning.  this time, she asked me if we could make a crown of knots around her head, kind of like a headband.  the final result reminded me a lot of mel b. from the spice girls (aka "scary spice"), so i got her to pose for me. 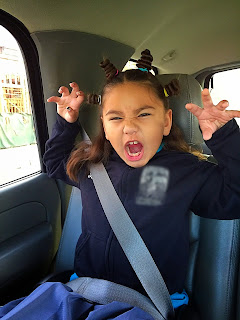 and then she took a selfie. 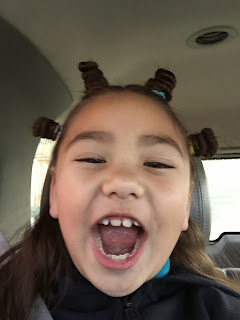 she liked having her hair done so much, she's actually consented to me trying out more fun styles on her.  i used to be able to get away with it when she was in transitional kindergarten, but now that she's older, she's more conscious of all that stuff and i have to get her permission before i do her hair.  oy vey, this kid.
at November 14, 2014