the family that runs together...doesn't necessarily stay together

the fit 4 fall 5K, sponsored by olympic gold medalist bryan clay, will always have a special place in my heart because it was the very first 5K i ever ran.  not to mention, it's super close to home and there are always lots of familiar faces throughout the course.  plus, i'm a legacy runner, which means that i've been a participant in the race every year since the first one in 2011.  i kind of have to keep running it until my legs fall off.  heh.

last year, the bryan clay foundation started sponsoring a contest for all of the schools in glendora to register as many people on their team as they could, and the school with the largest team won a check for $5,000.  the bean's school promoted the hell out of it to their students and families, which resulted in a win by a landslide.  i'm not sure why, but they kind of dropped the ball this year and didn't really get the word out until about a week before the race.  when it was announced that another school was giving us a run for our money (literally), i talked the teen and the bean into joining the hub and me so we could add four more to our team.

it took a little work, but we finally got dressed and out the door, all clad in running shoes and our crazy bright neon team shirts.  the bean was not in the mood for a run that morning, throwing a fit and all but refusing to come.  it was the promise of possibly seeing her friends along the course that finally got her dressed and in the car, but she still pouted the whole way there.  oy vey.

parking was a little hairy, but the hub always has a few tricks up his sleeve.  we even managed to find a spot just around the corner from the start line. 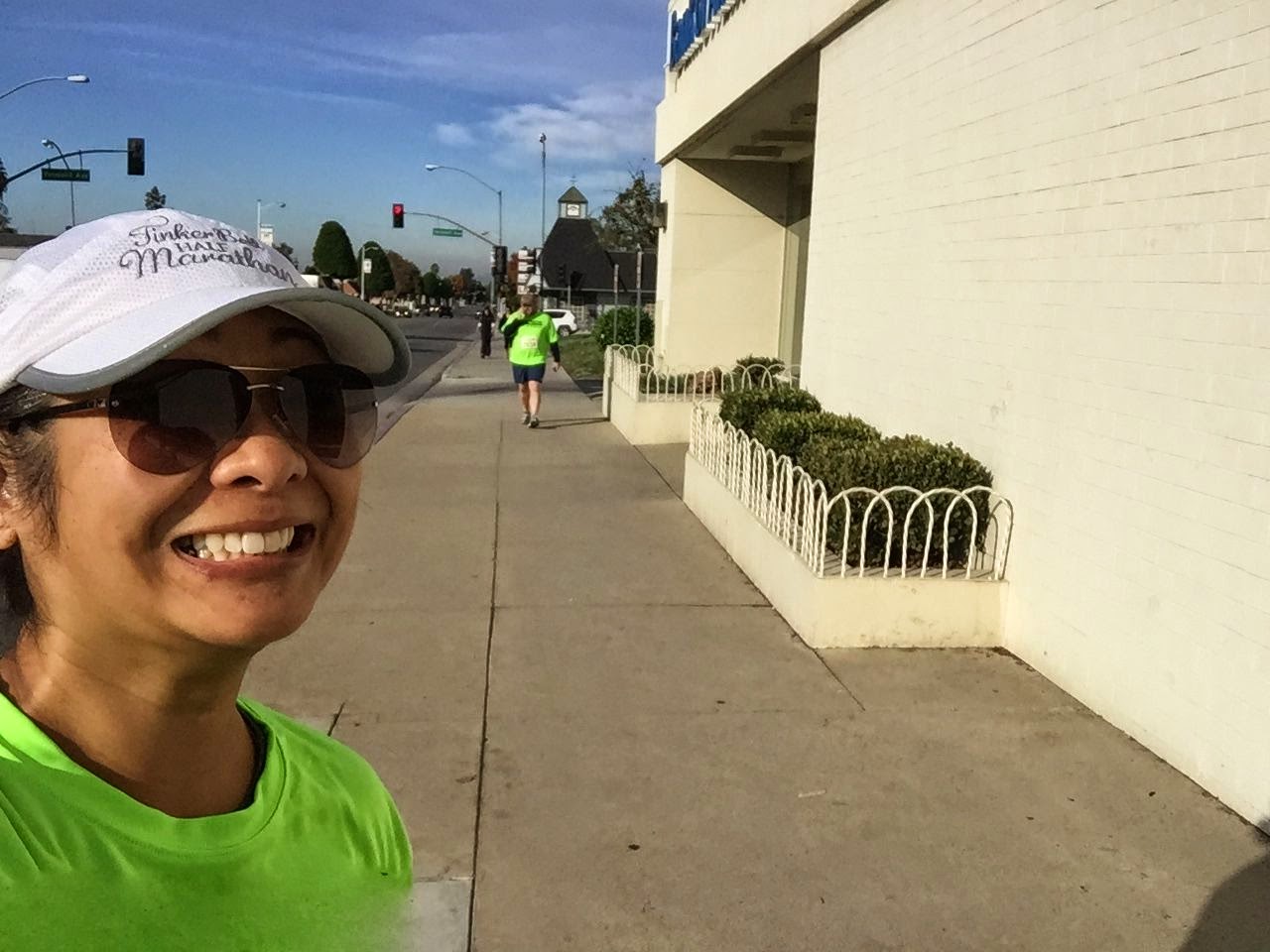 and sure enough, as we joined the crowds of people hovering near the start, the bean let out a yelp as she found one of her most favorite friends in the whole world. 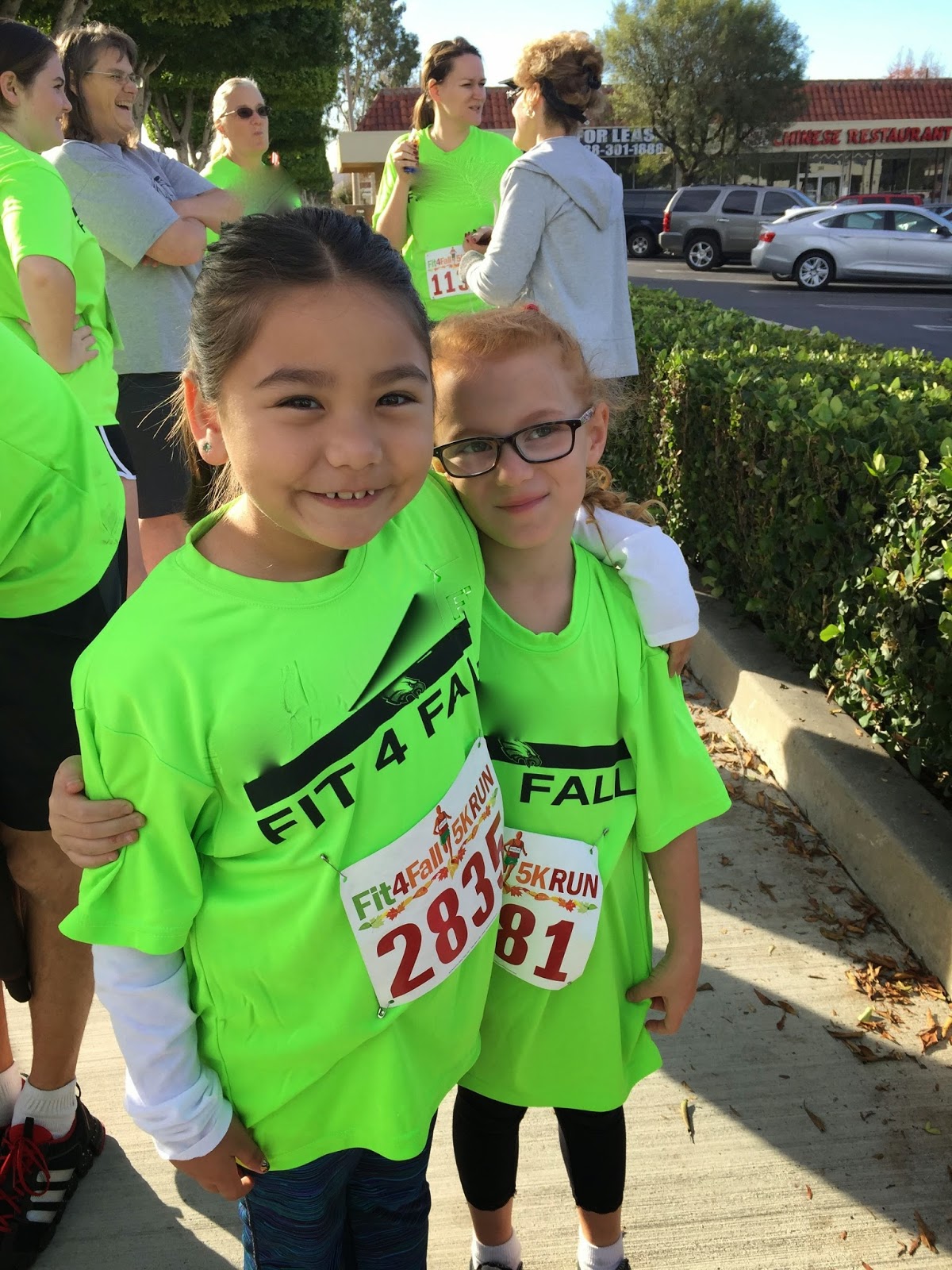 the teen was...a little less enthused about this whole thing. 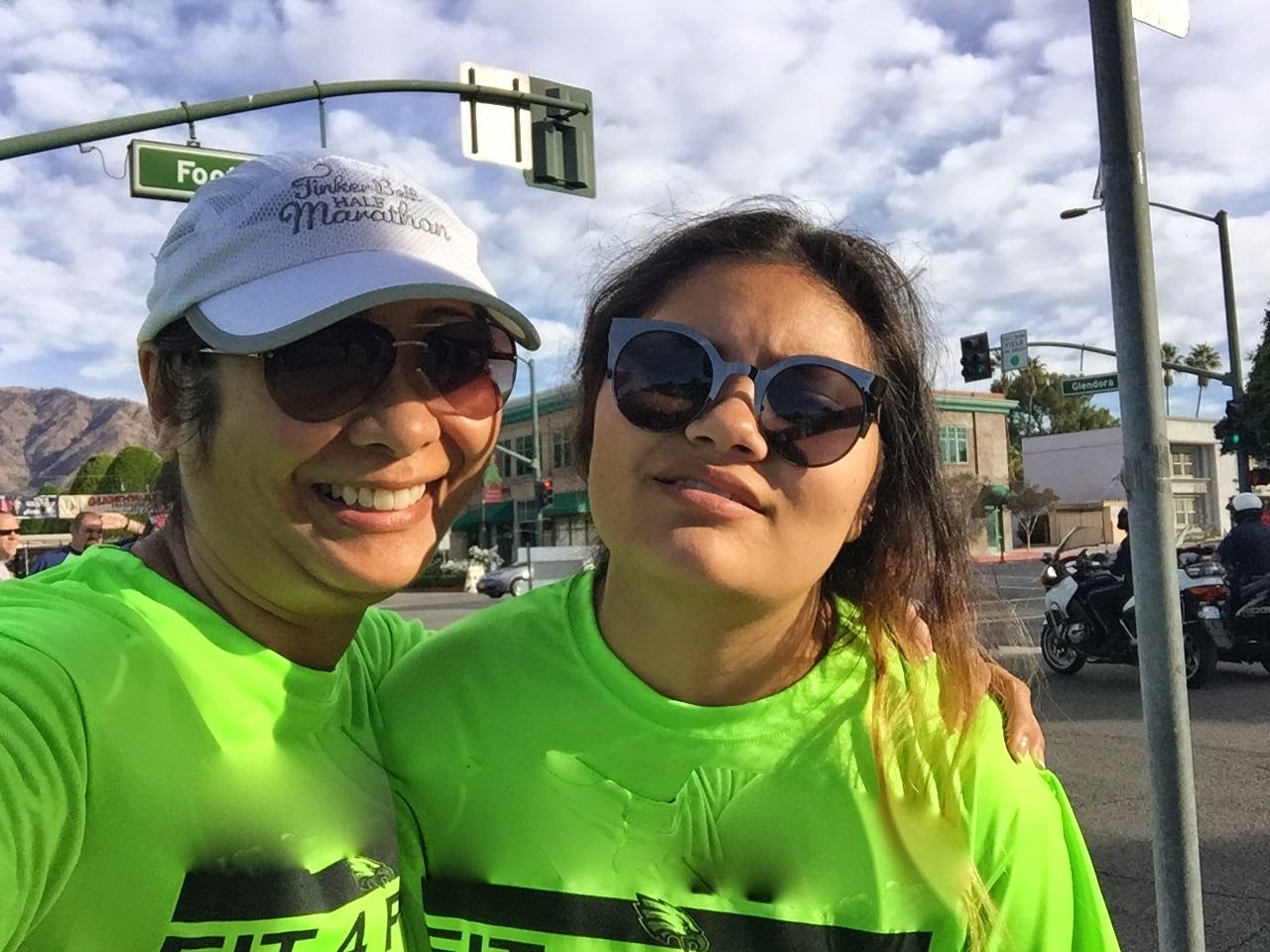 i, on the other hand, was kind of over-the-moon elated to have my whole family gathered for a race.  this just doesn't happen, like ever. 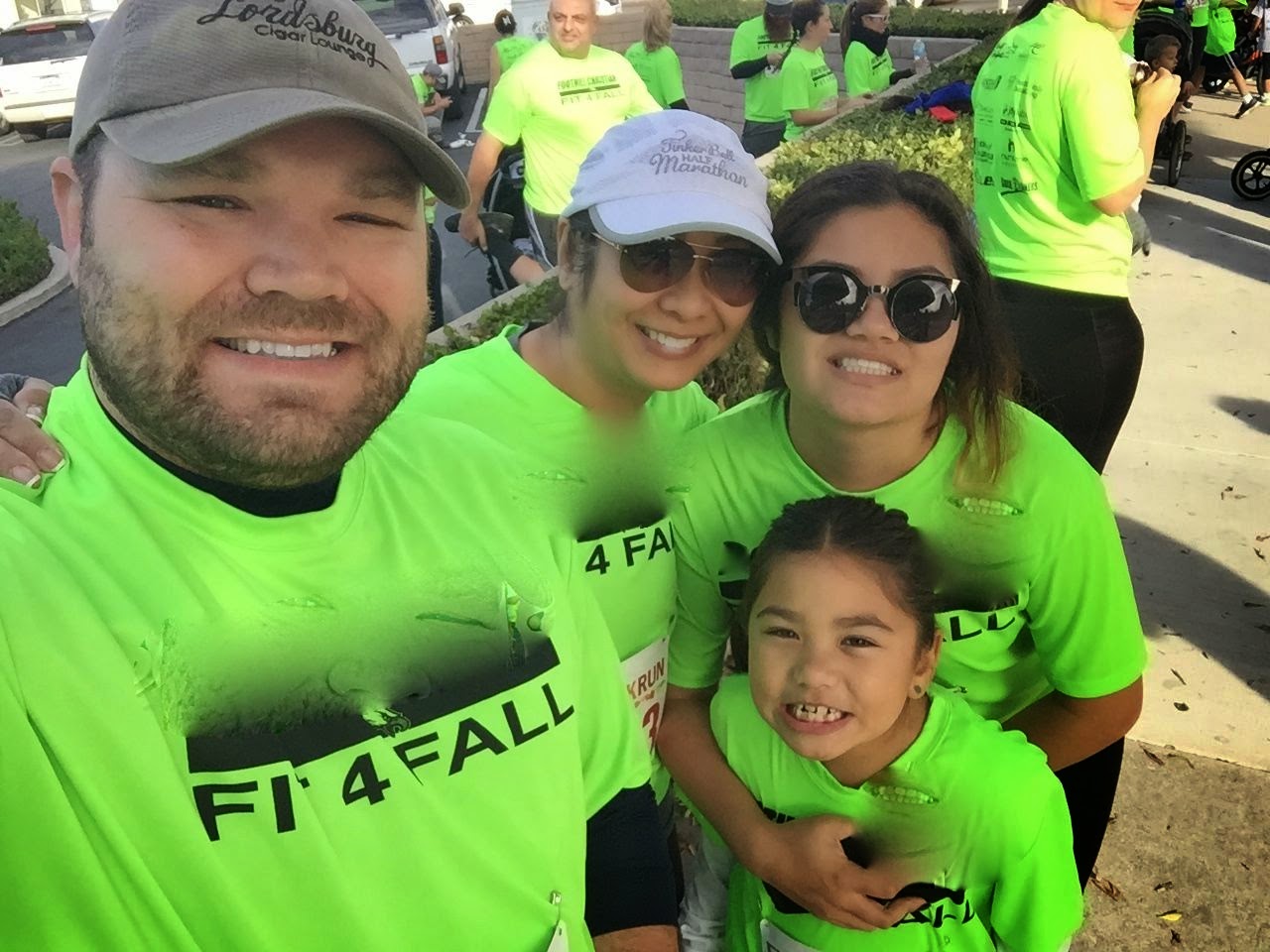 i was resigned to having to do a lot of walking during this one.  i was itching to get out and run it to see if i could continue my streak of getting through the whole 3.1 miles without a walk break, but i knew the teen wouldn't be able to hang with that.  she'd graciously agreed to stay with her sister while the hub and i ran it, but i felt bad leaving them behind.  plus, the bean and her friend were sticking together.  and so as we crossed the start line, i watched the hub take off ahead of us.  the girls did get a running start, though. 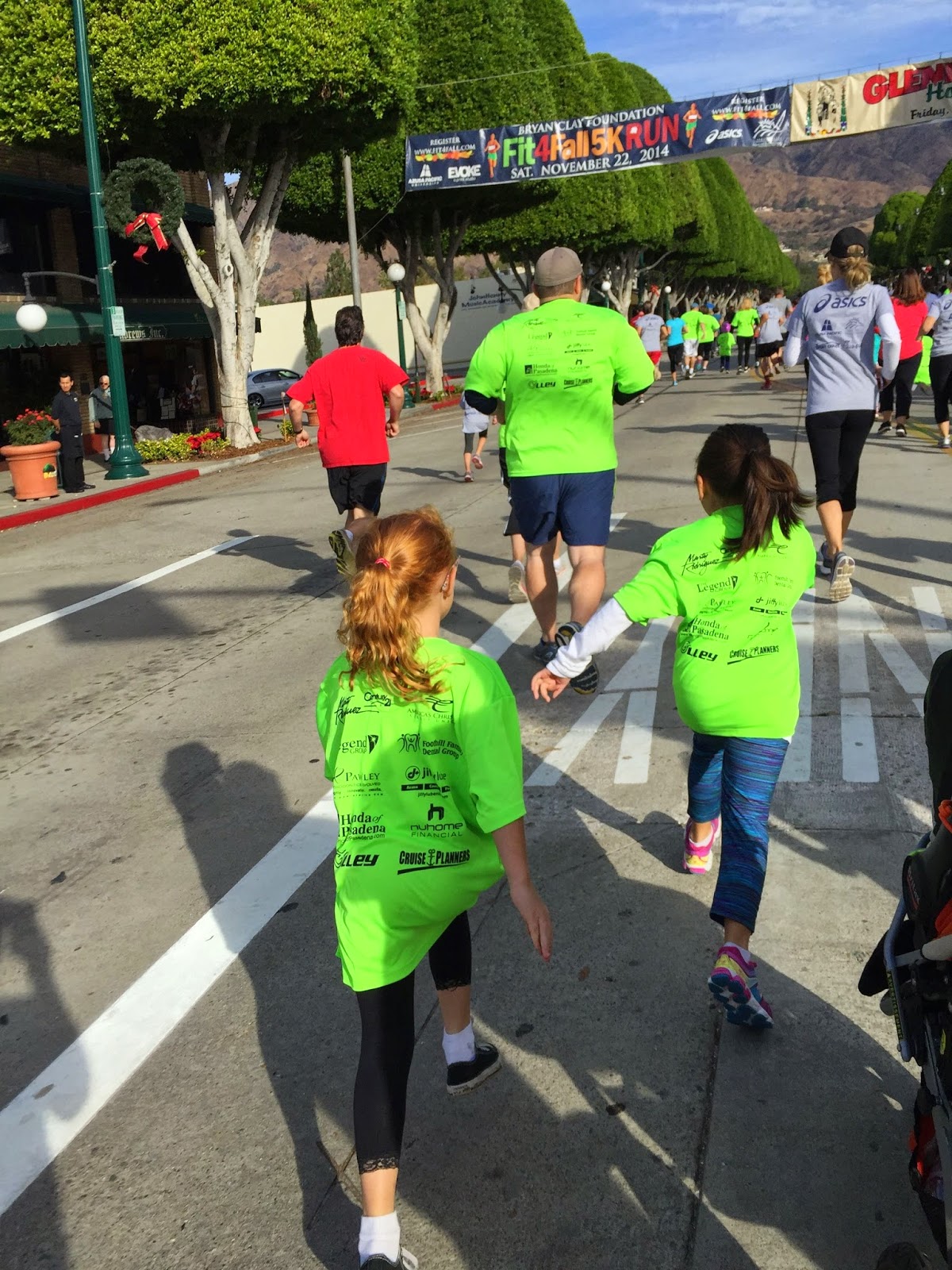 it looks like the bean is ahead of her friend there, right?  but the joke was on her as little red proved herself to be a pretty steady little runner.  she hung back with the bean for at least half of the race, putting up with her little sprints that lasted for about five seconds before slowing back down to a walk.  seemed like forever till we finally got here: 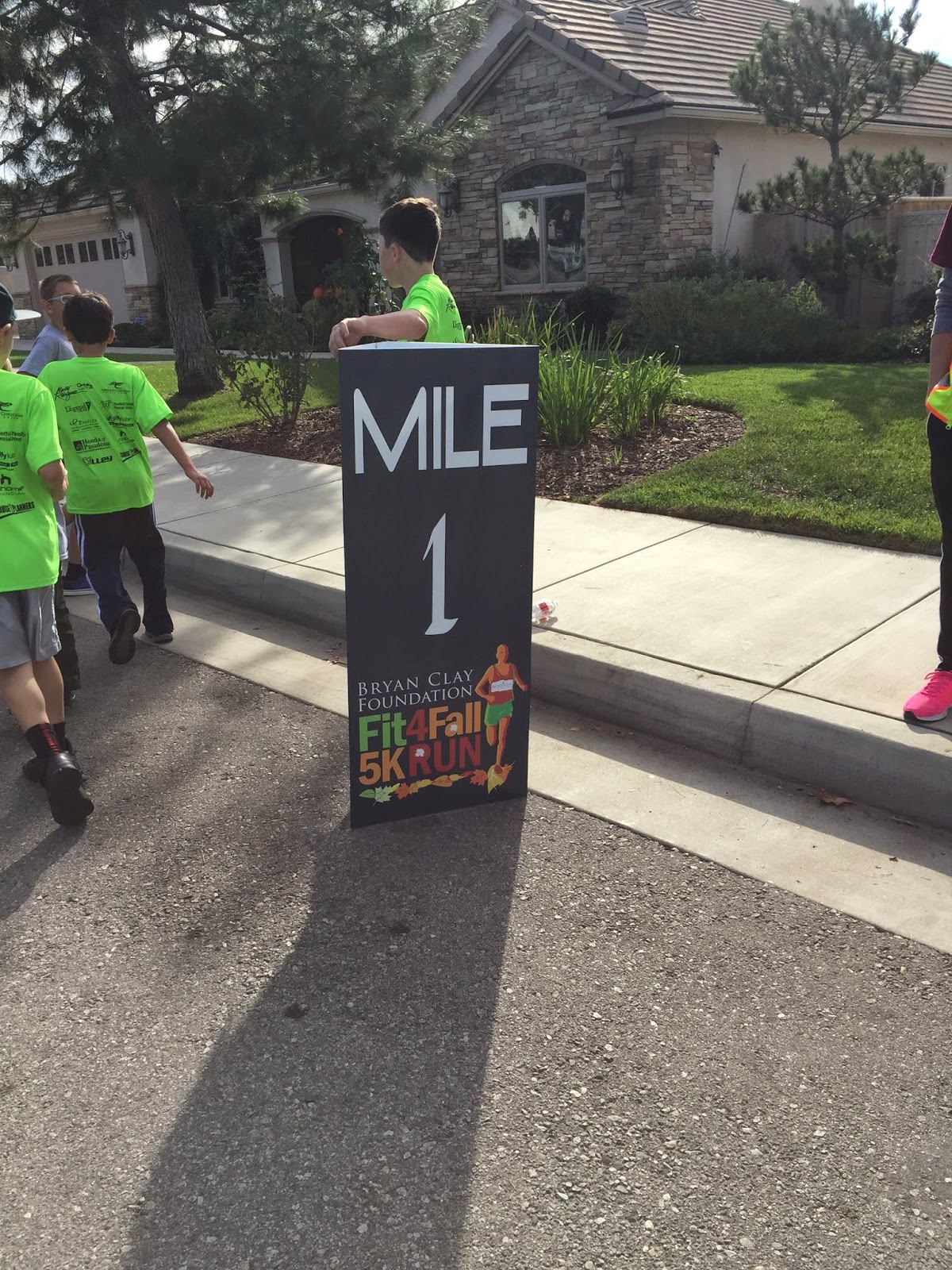 the teen was ahead of us for most of the run, and i'd prod the bean along with a "hey, go catch up to your sister, she's totally leaving us behind!"  although it was fun to be with the girls as i listened to their 7-year-old chatter along the way. 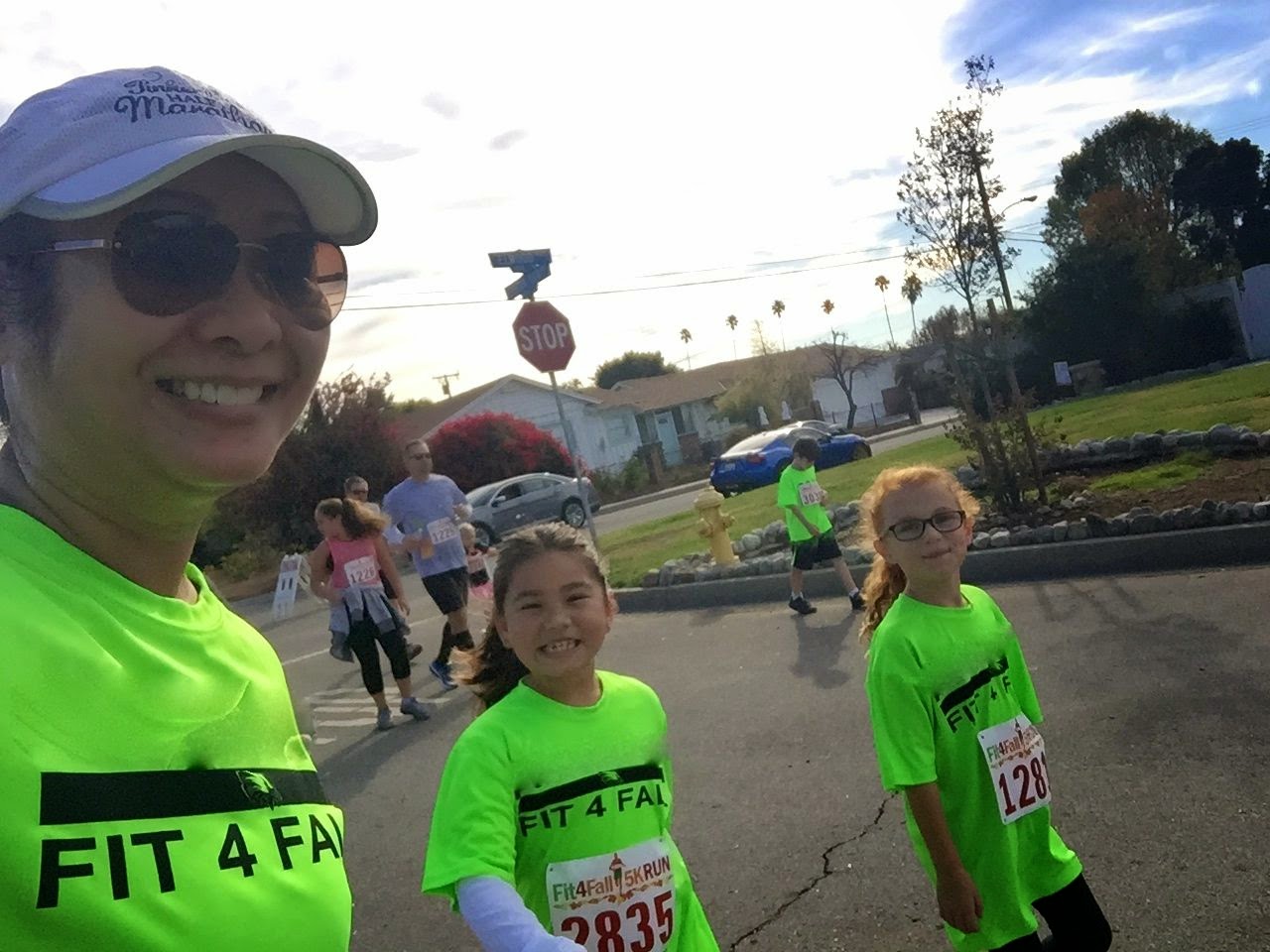 this lady was annoying the hell out of me, though, as she continually tripped over the girls as she sped-walked along with her friends.  i couldn't understand why she wouldn't just stay to the side instead of always veering towards the girls.  she bonked the bean with her stupid elbow more than once, and by the third time i was ready to smack her with the bottom of my shoe.  ugh. 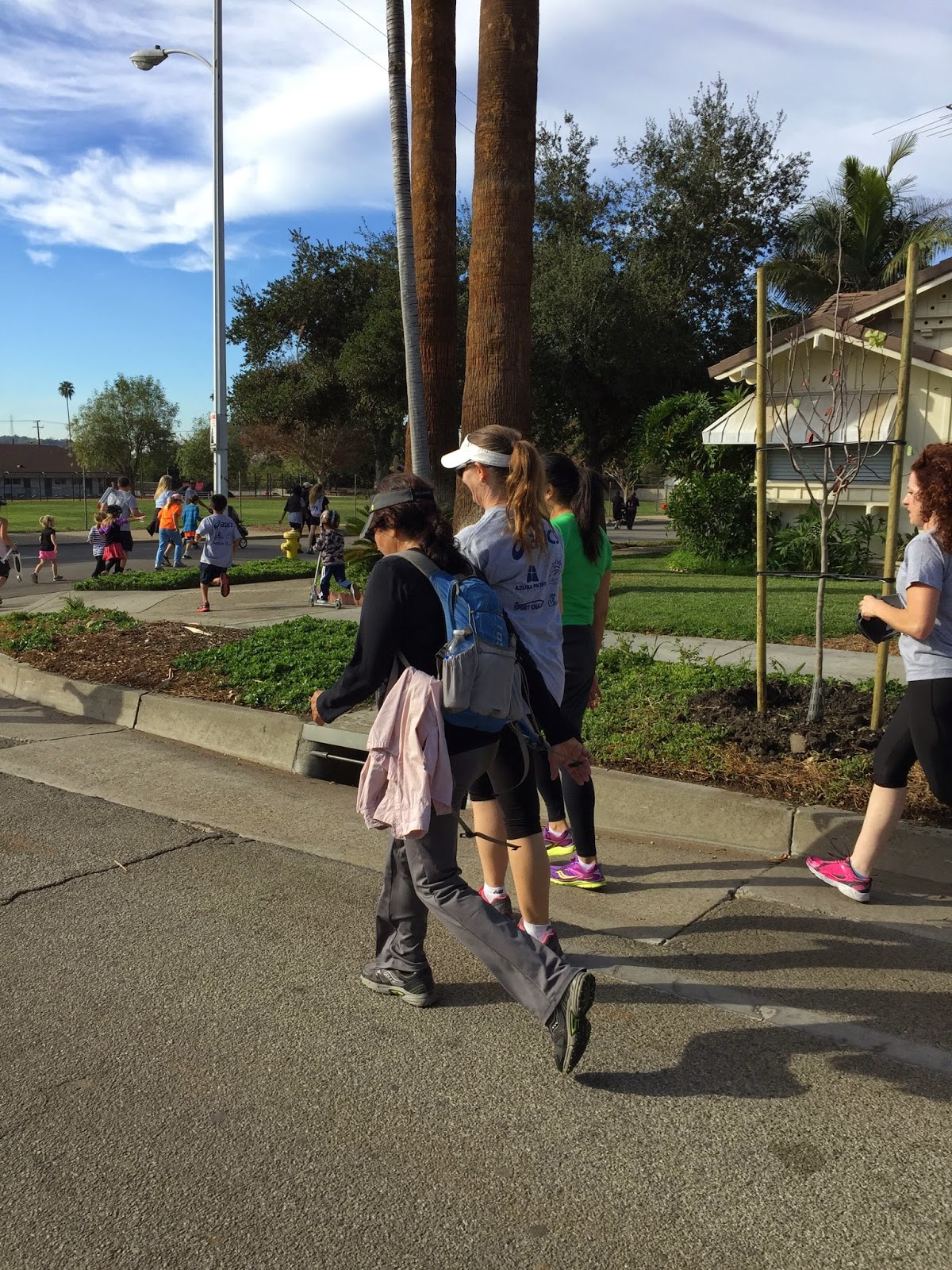 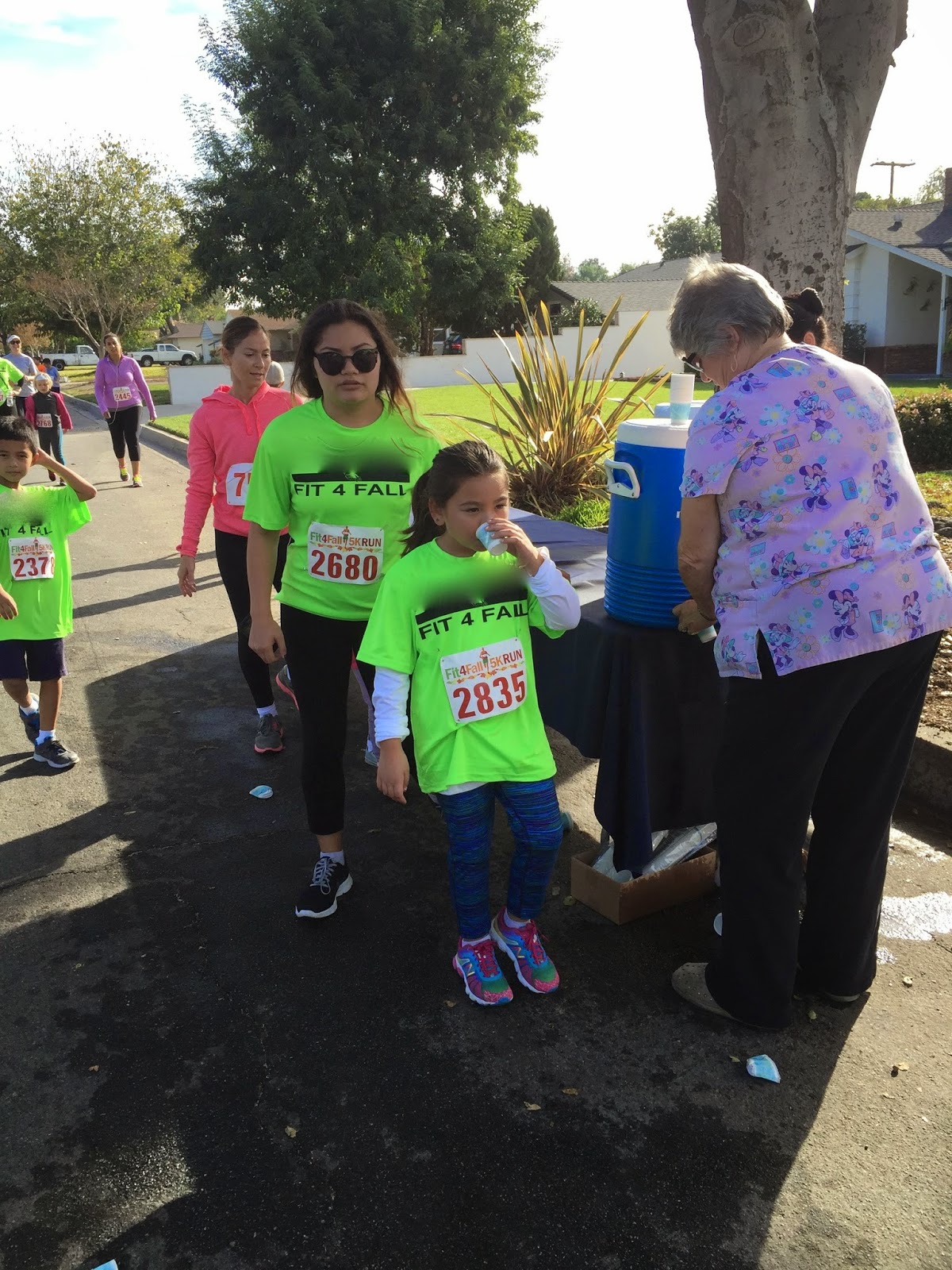 after the second mile marker, little red finally tired of the bean's whiny walking shenanigans.  she broke into a sprint that lasted for a good long stretch, and we ended up leaving the two sisters behind after all.  i'd promised her mom that i'd stay with her, and so the teen ended up with the bean while i kept up with little red.  it felt really good to run again.  and in what seemed like no time at all, that final mile was behind us and we were approaching the finish line at last. 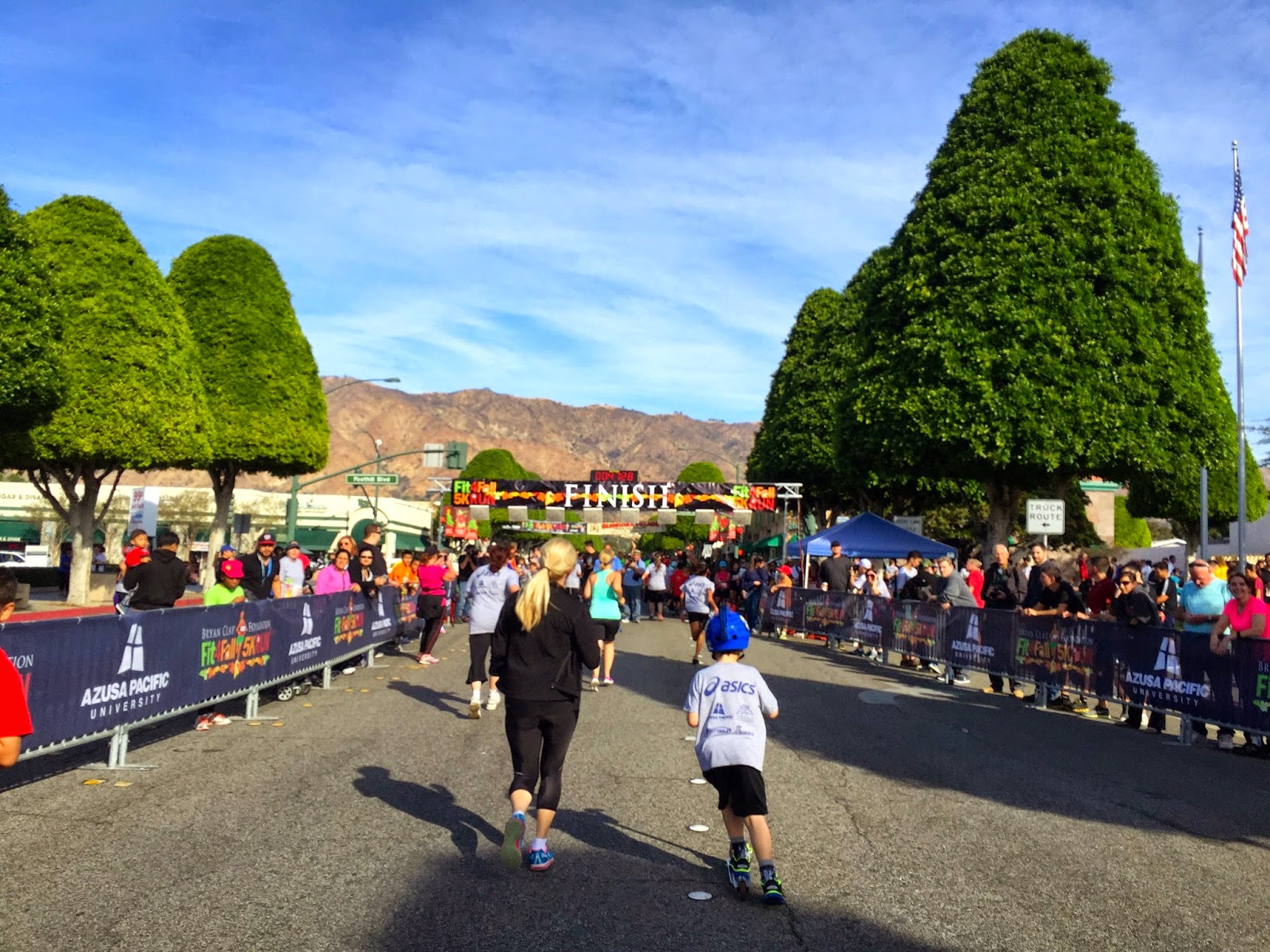 her mom found us just as we crossed the finish, and i thanked little red for being my running mate as i joined the hub, who'd also finished just a minute ahead of us.  we waited for the girls together on the sidelines, and cheered loudly as we spotted them - also just about a minute behind us.  they both got high-fives from bryan clay as they finished. 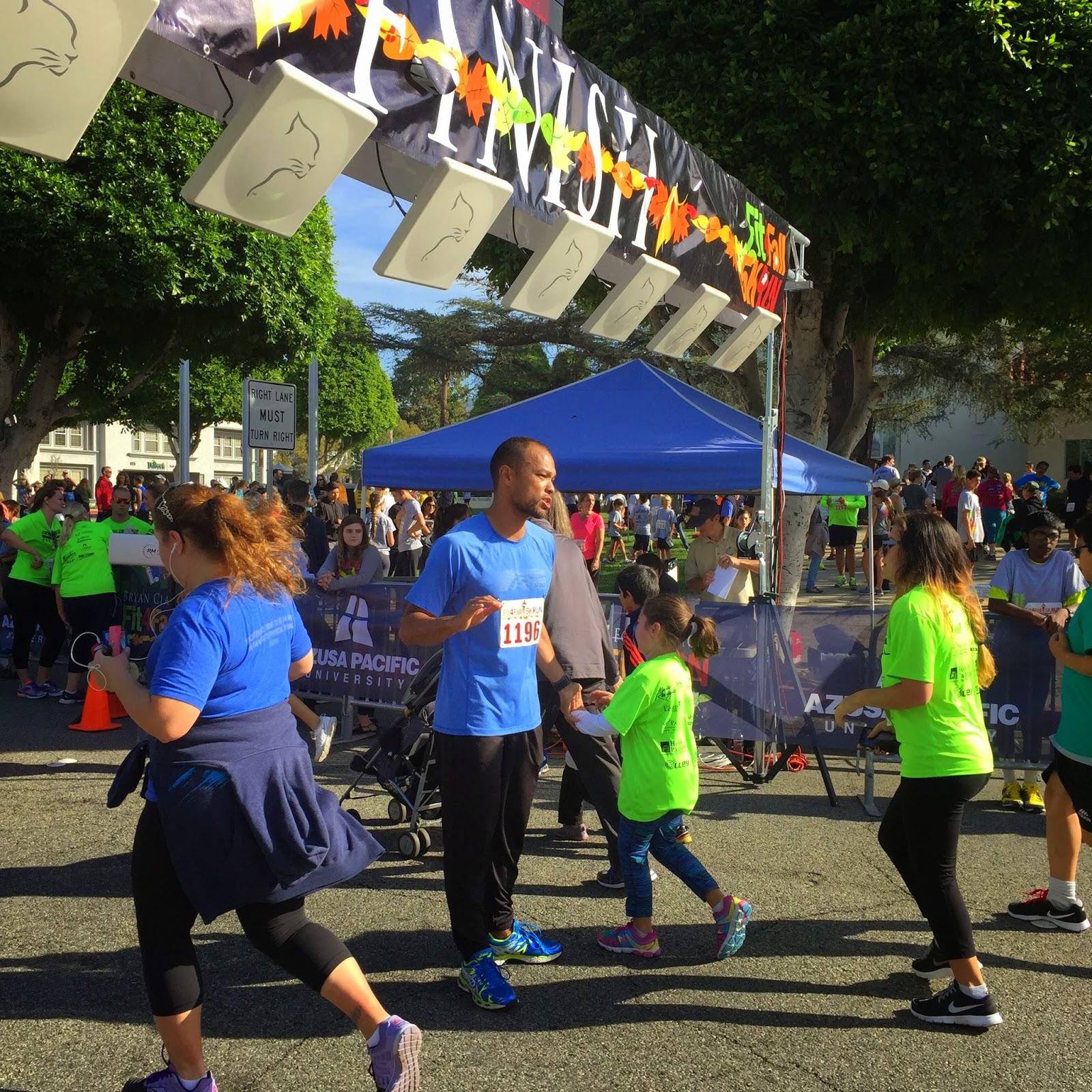 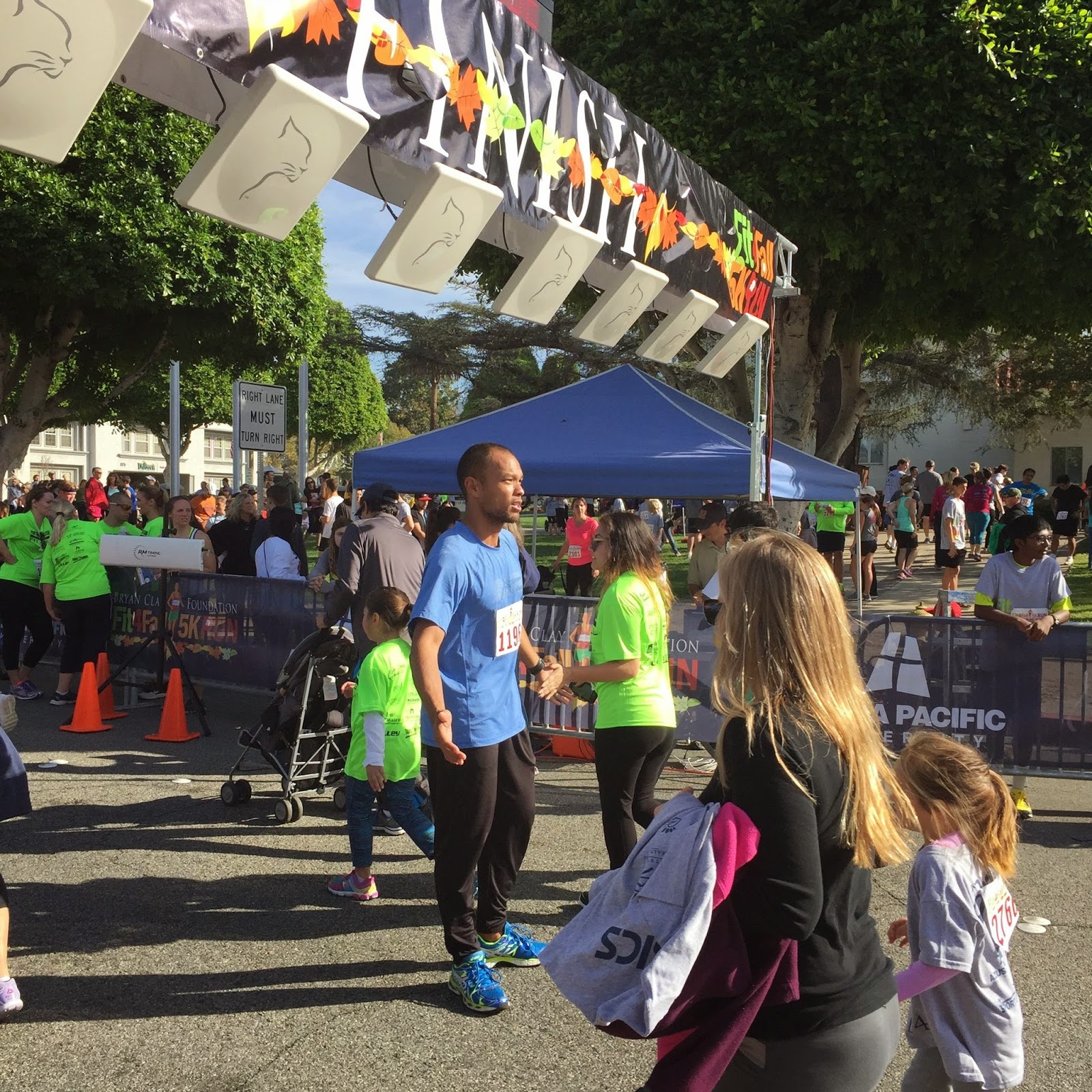 amidst all the confusion, we still managed to get a shot of them together.  maybe next year we'll get them all looking in the same direction. 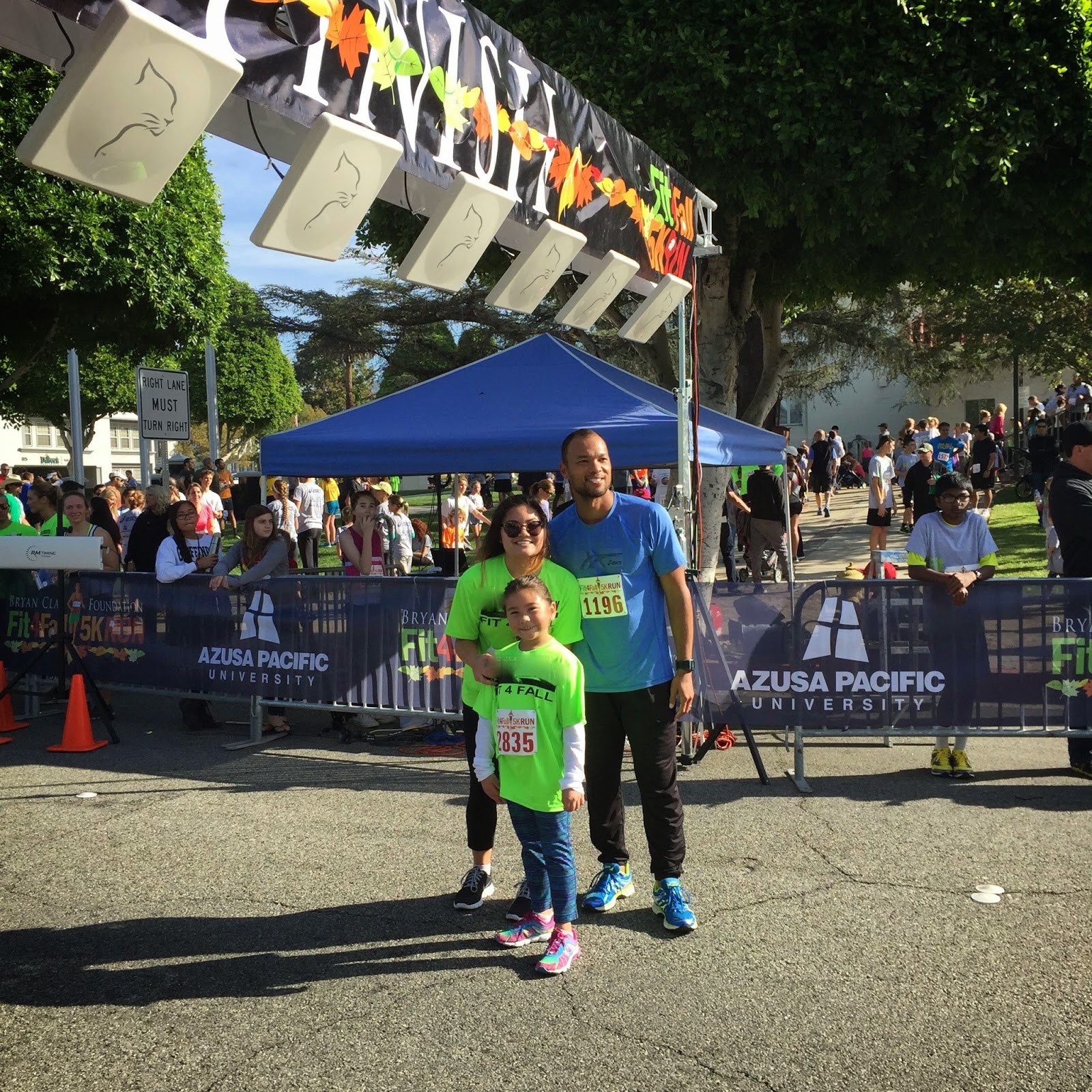 although who knows if there'll be a next year for this girl... 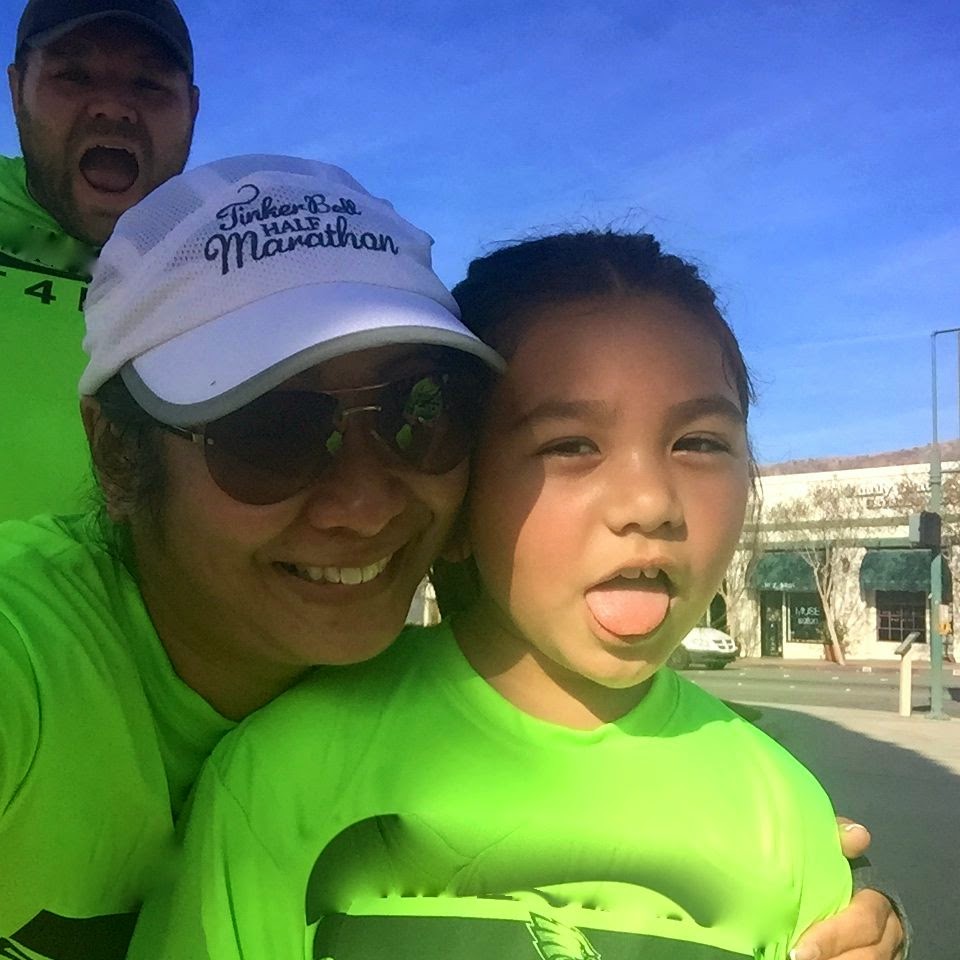 Email ThisBlogThis!Share to TwitterShare to FacebookShare to Pinterest
Labels: family, running my ass off