i came across another one of those disneyland annual passholder perks a couple of weeks ago via twitter - an advance screening of their newest movie, "big hero 6."  it was scheduled for a saturday that the bean had a soccer game, but i figured i'd register for it anyway and see if we could make it work.

and then...mother nature took pity on me and poured some much-needed, very welcome rain down on southern california the night before.  and during a good portion of that morning, too.  since i'd already given up on going to the movie anyway, it didn't occur to me that we might still be able to go until the teen brought it up.  a quick text to the coach confirmed that yes, all games for the day were cancelled, and that lit a fire under our asses to get up and ready.  hell, i just thought i was going to lounge around until it was time for barre class.  heh.

the hub, who'd worked late the night before at the shop, sleepily opted out of the movie but cautioned us to drive extra carefully on the sure-to-be super slick roads.  the freeways were fairly open that rainy morning, and we still made good time despite cruising down at a slower speed than normal.

downtown disney was quiet that morning as well.  happily, movies can go on as planned, rain or shine. 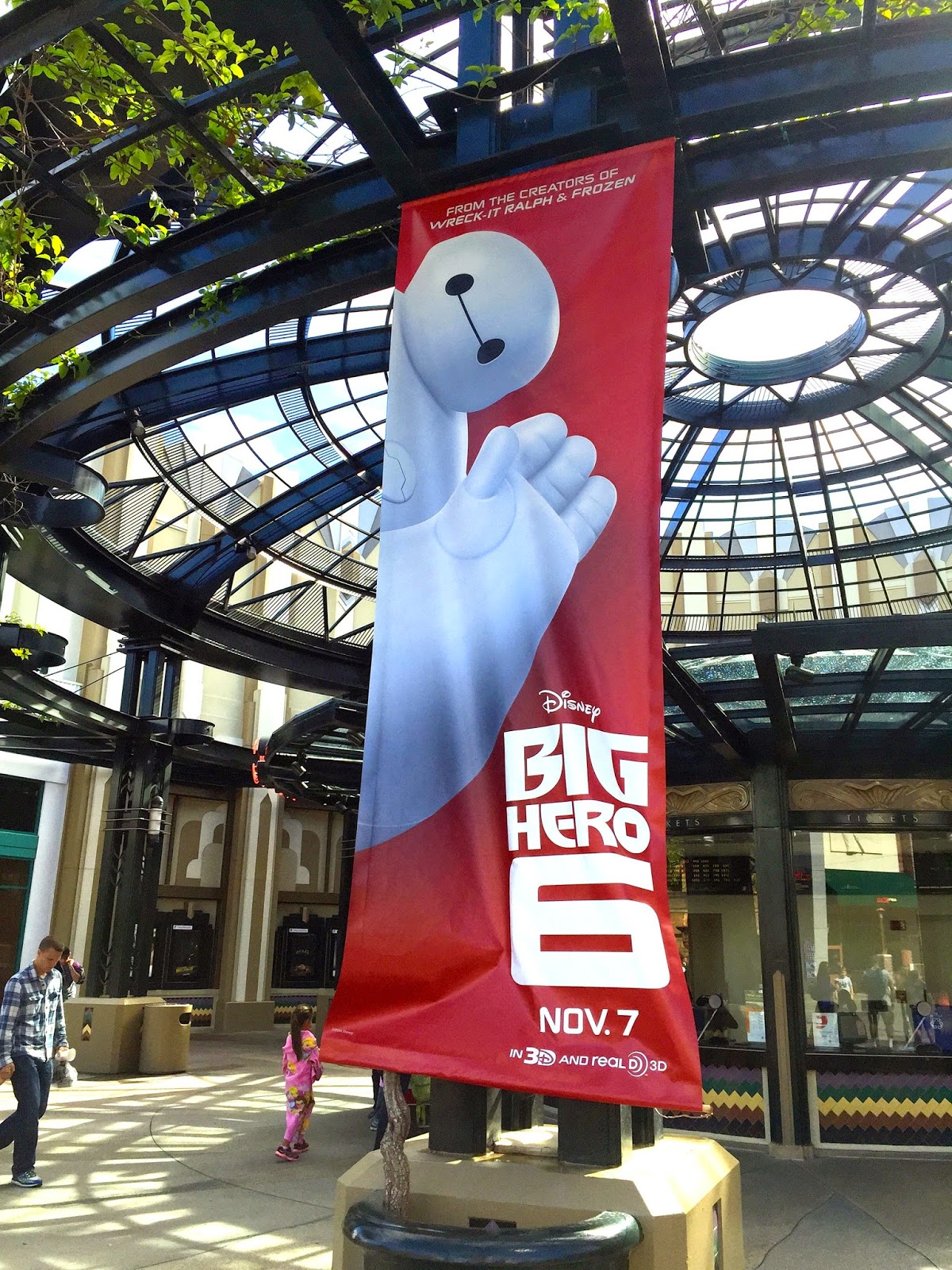 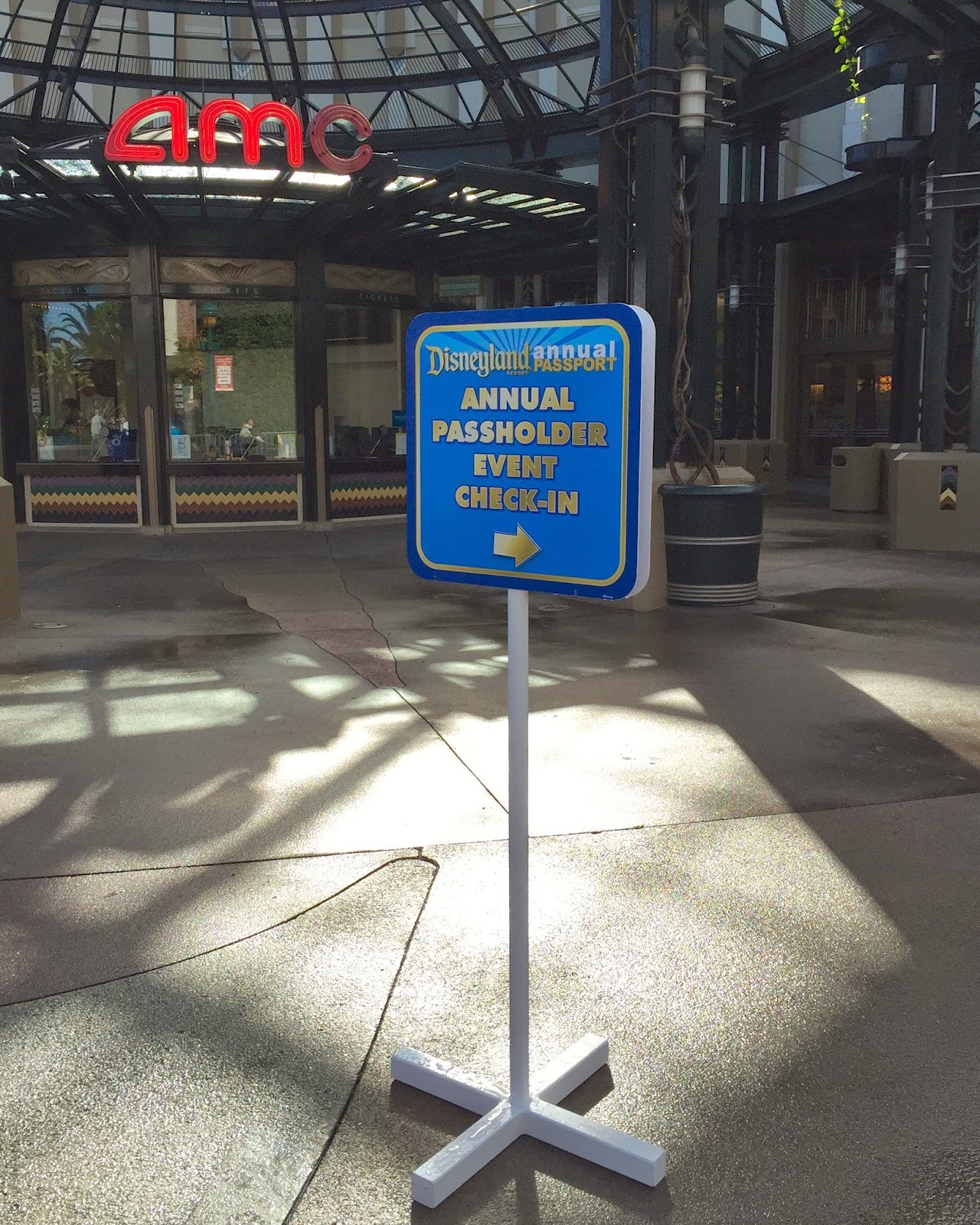 after we got through the line to check in, we had to turn in our phones.  i was sad not to be able to take pictures, but i get it - piracy is a major problem, and especially since this movie wasn't even out in full release yet, they wanted to keep it under wraps as much as possible.  and because people are sneaky, before we were allowed to enter the theater we were scanned with one of those body wand things they use at the airport just to double-check that there were no electronics on our person.  we even overheard the staffers talking about "who's got the night vision?  okay, make sure you scan throughout the movie."   night vision.  wow.

then we were handed a snack and sent on our merry way.  they must've had a shitton of these left over krispy treats from the just-ended mickey's halloween party nights: 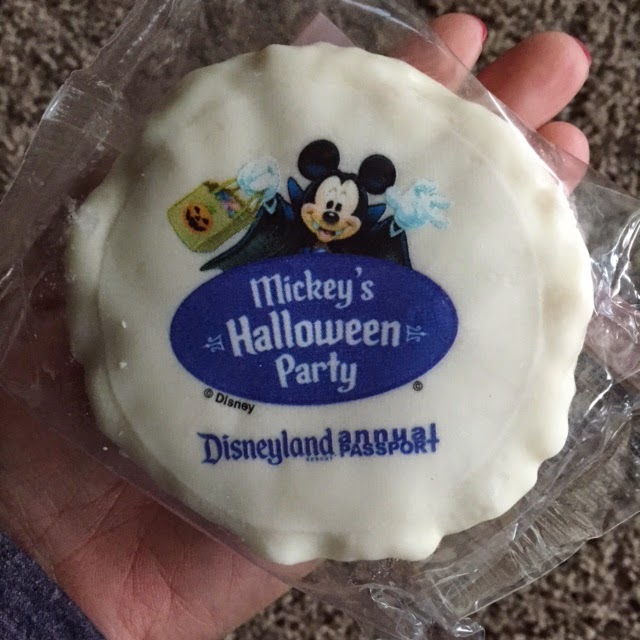 we were treated to some fun previews - one for the new disney infinity video game pieces that are coming out, followed by a teaser for the upcoming movie "tomorrowland."  i gotta say, george clooney is actually finally starting to look his age.  still hawt, but you know.  we got another teaser for next year's live-action "cinderella," watched the trailer for "into the woods" - coming out on christmas, so you know what we're going to do after presents are opened this year.  then we were treated to a new (to us) trailer for "inside out," which looks like it'll be super cute.  and lastly, a disney short called "feast."  when you go see this movie, don't miss the short.  it's really sweet and you'll love it.  trust me.

the girls and i had already seen the extended preview for "big hero 6" at the old "captain e-o" theater in disneyland, so we had an idea of what to expect for the movie.  i'm not going to give anything away here, but just know that even if you aren't sure if you'll like it...go see it.  GO SEE IT.  it's a fantastic movie and i hope it's a huge hit at the box office.  also, as with most disney features now, make sure to sit through the credits and wait for a bonus scene at the very end.  if you're a marvel fan in any way, you'll kick yourself if you skip it.  like, you probably have time to go pee right after the movie, but go back afterwards.  again, trust me.

on our way out, we picked up our cell phones and paid a visit to our new friend baymax. 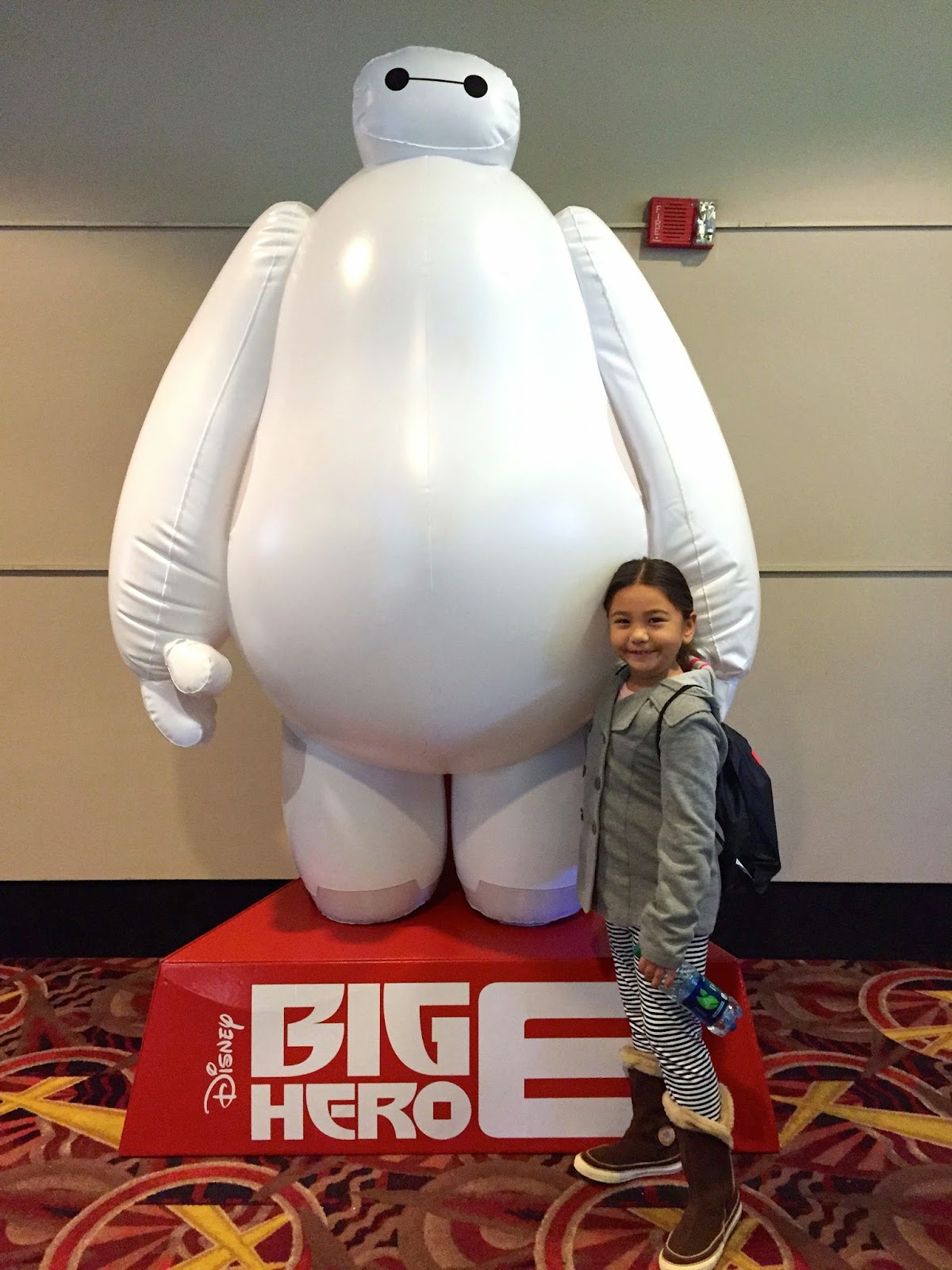 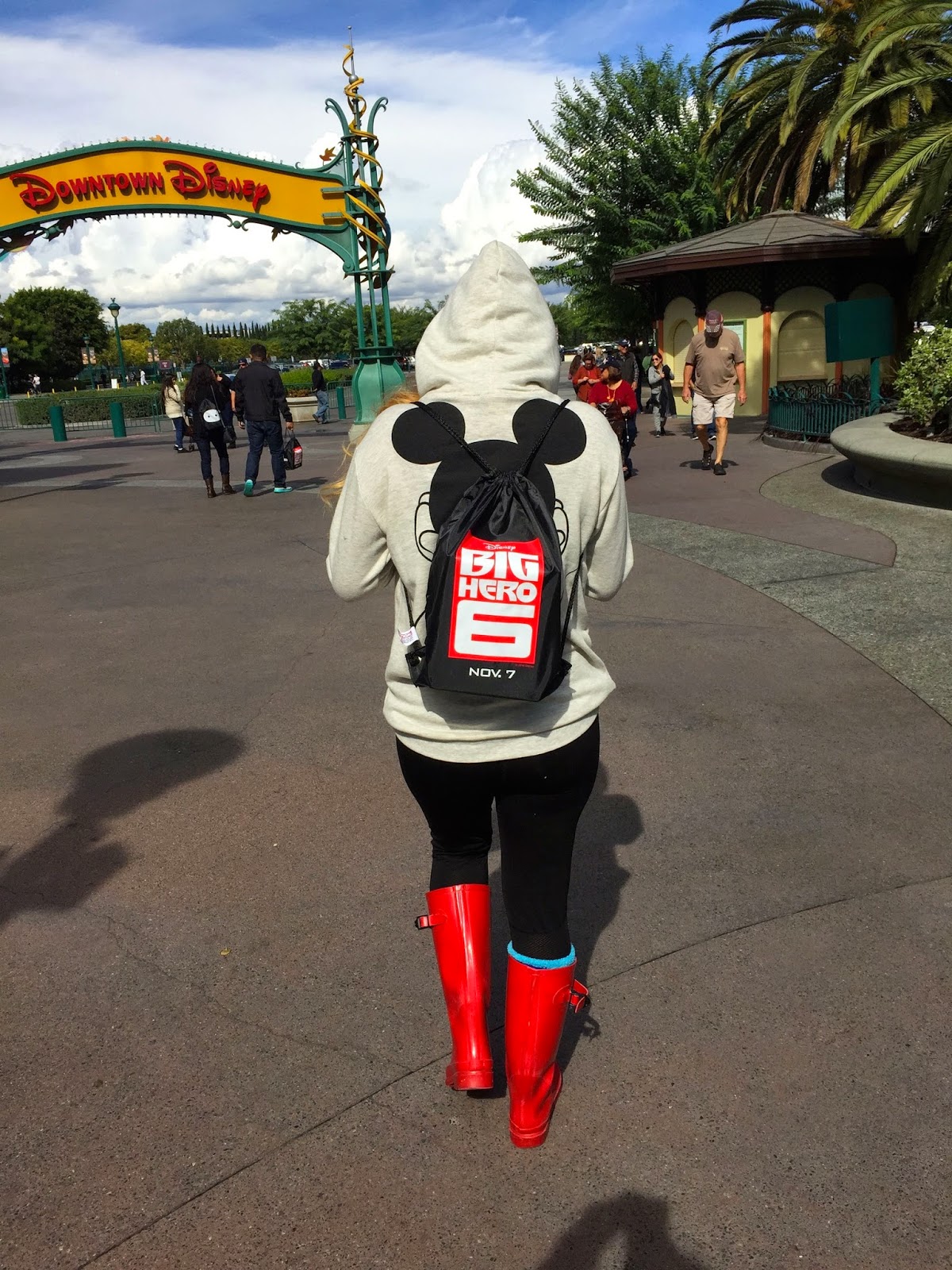 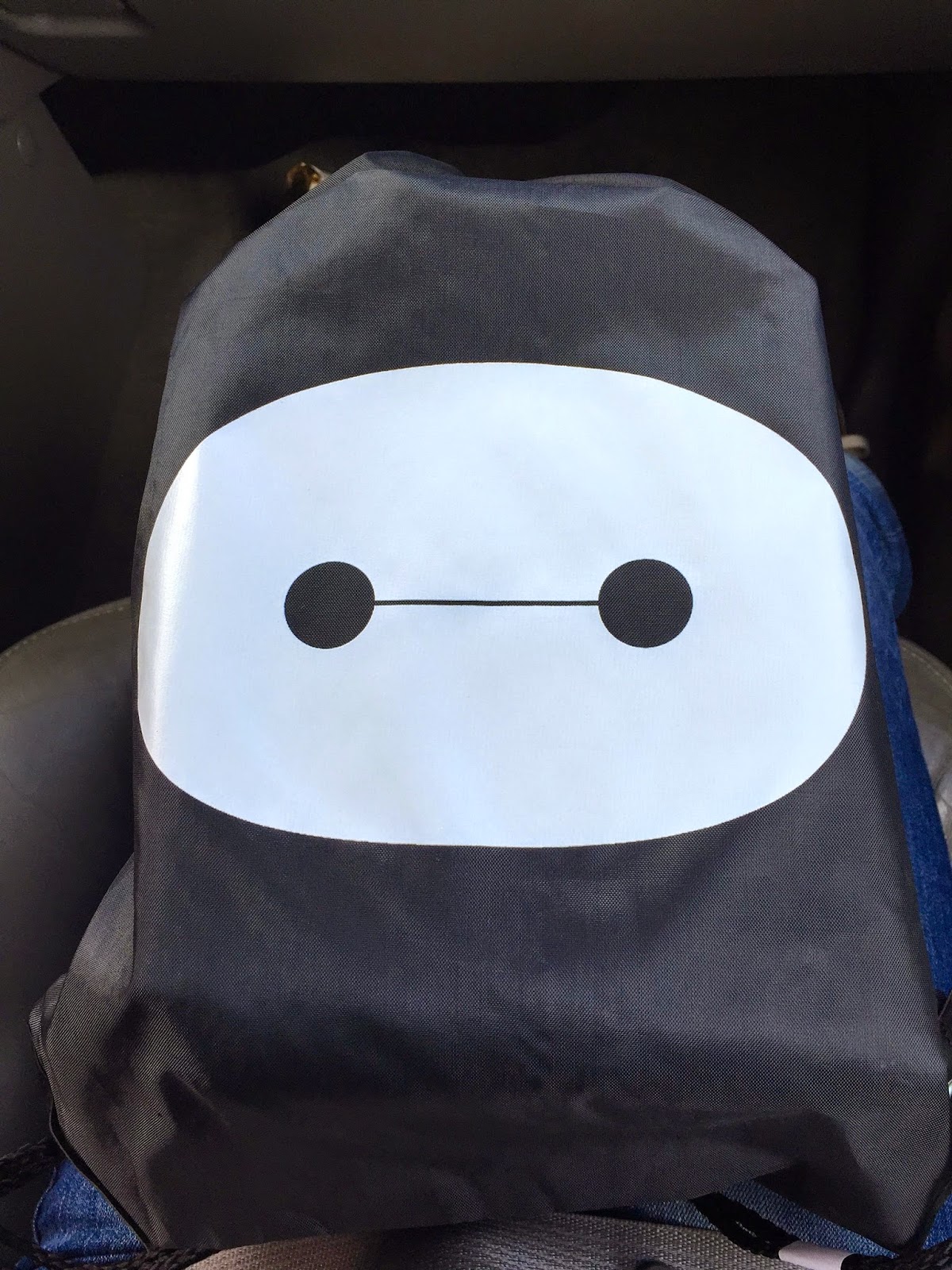 what's inside, you ask?  well, we each got one of these: 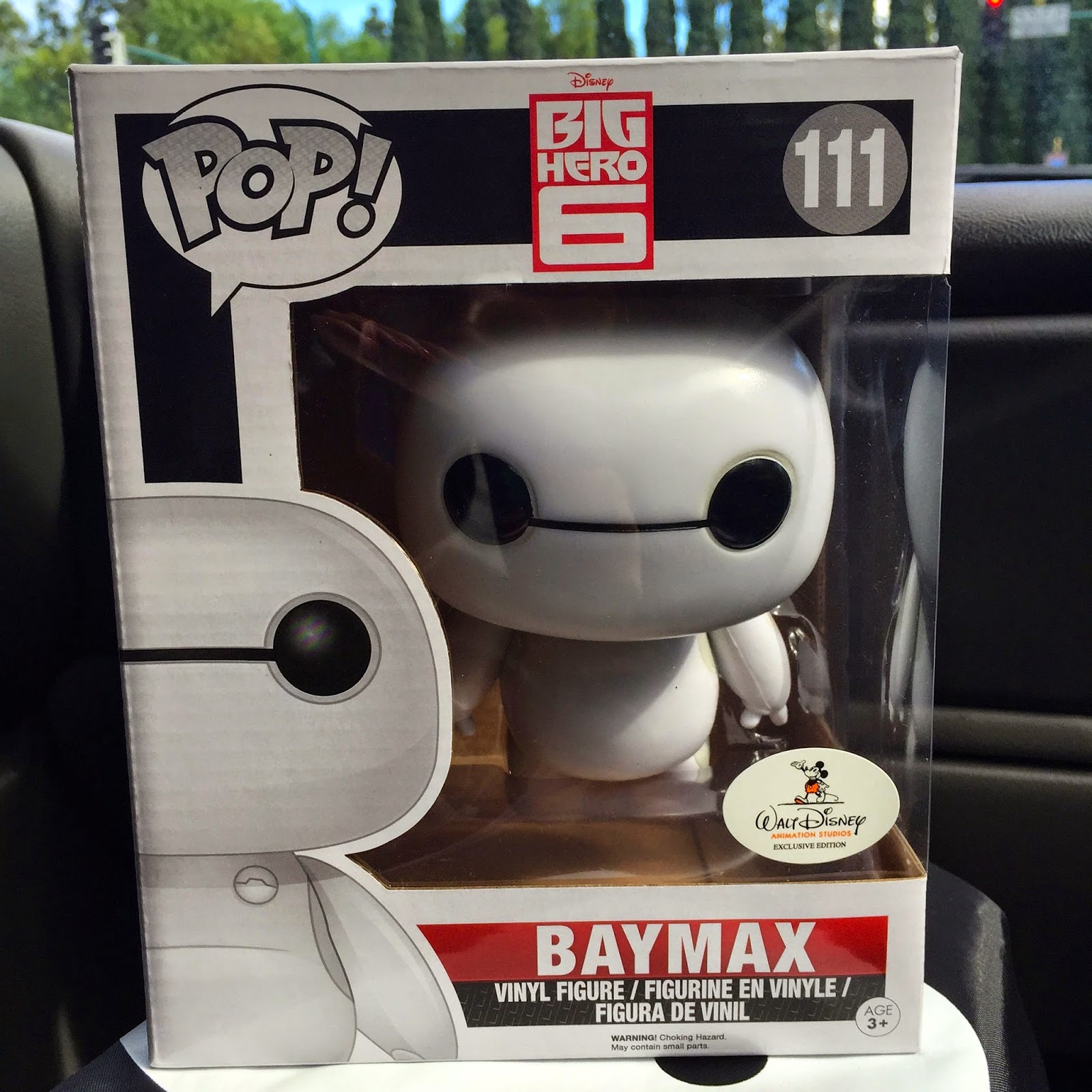 and since we were already there and all, i mean, hey - why not head on over to the parks?  you would do the same thing. 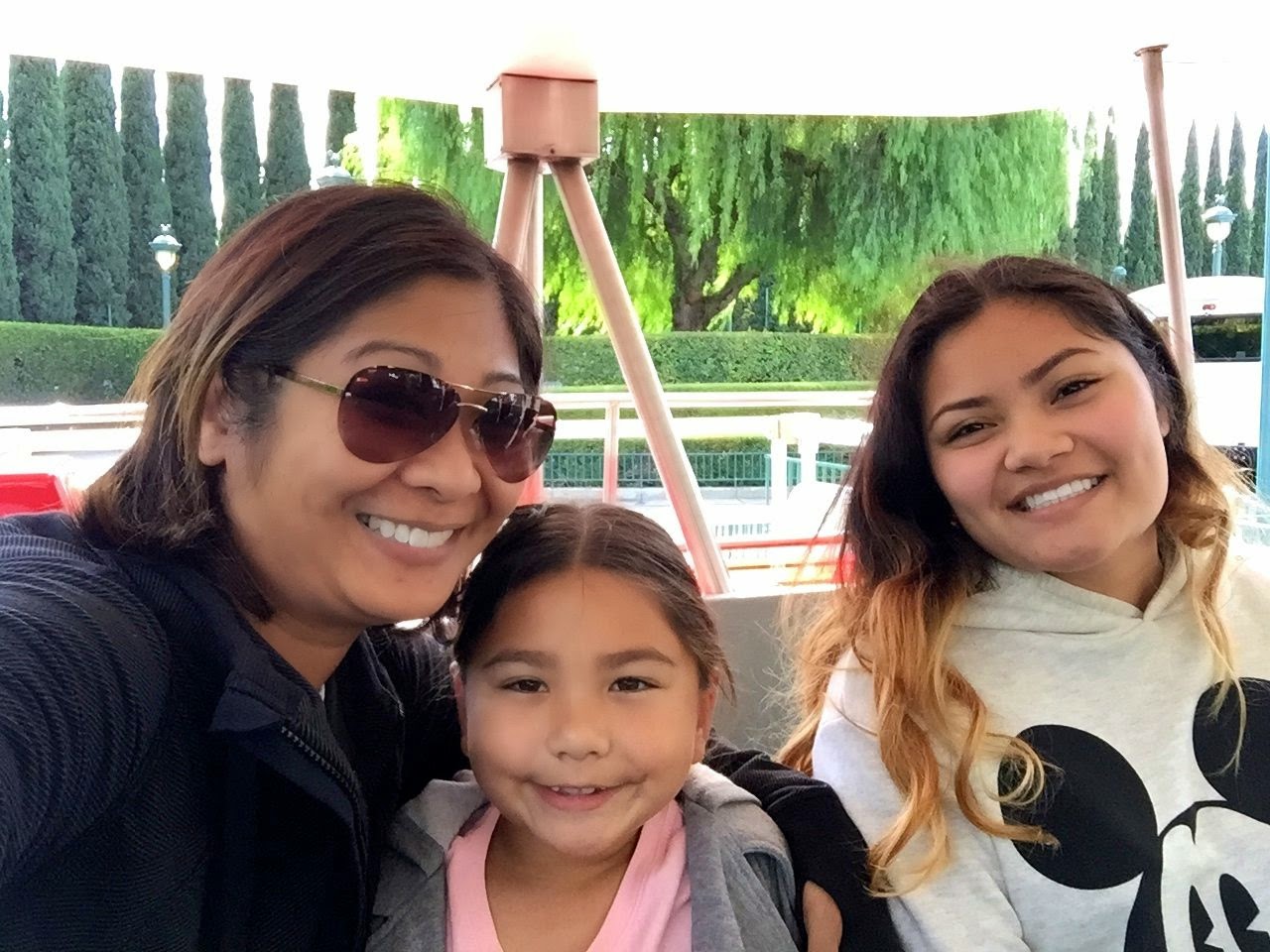 do you see what's peeking between those trees?  oh boy! 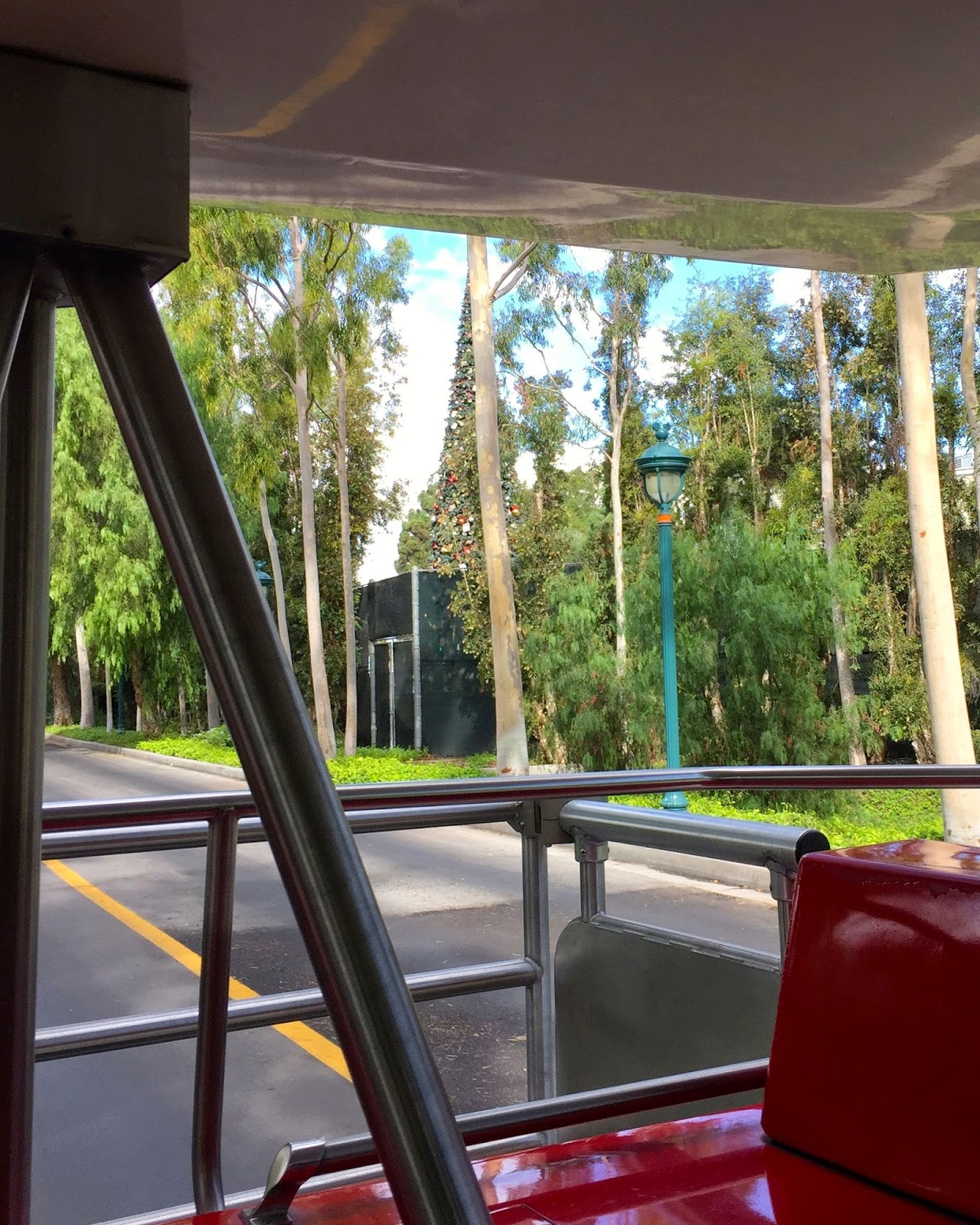 the girls decided to try a ride they hadn't been on before: 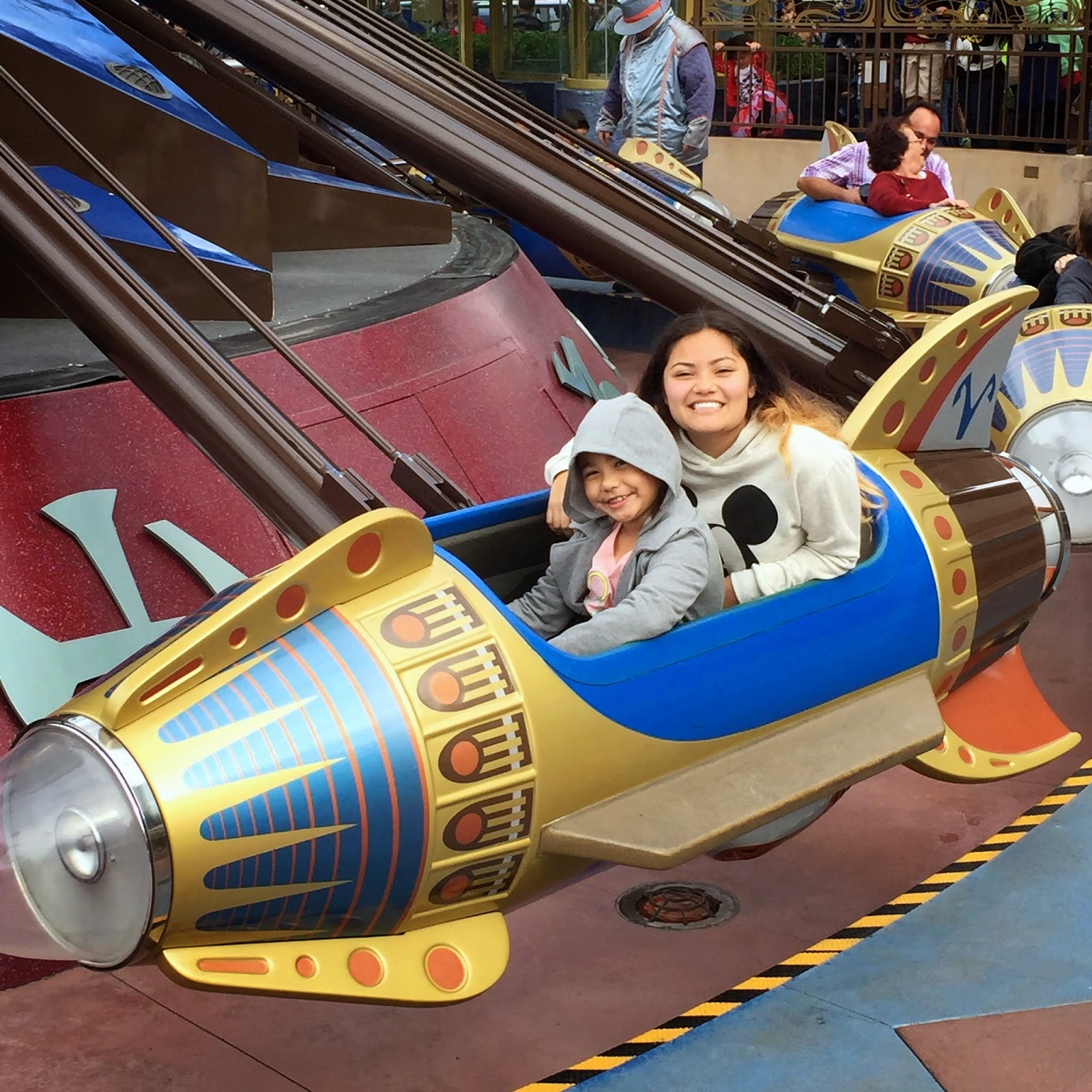 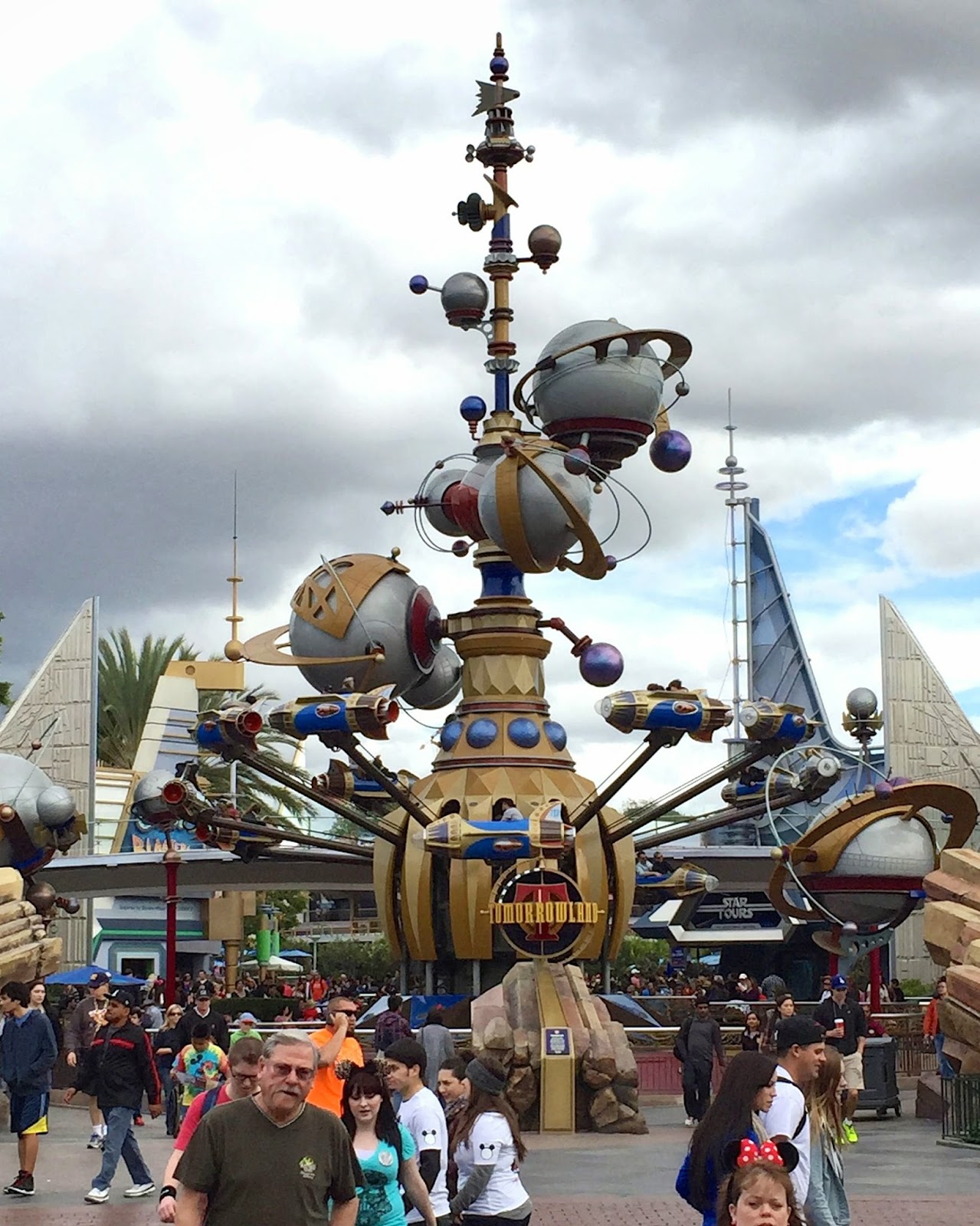 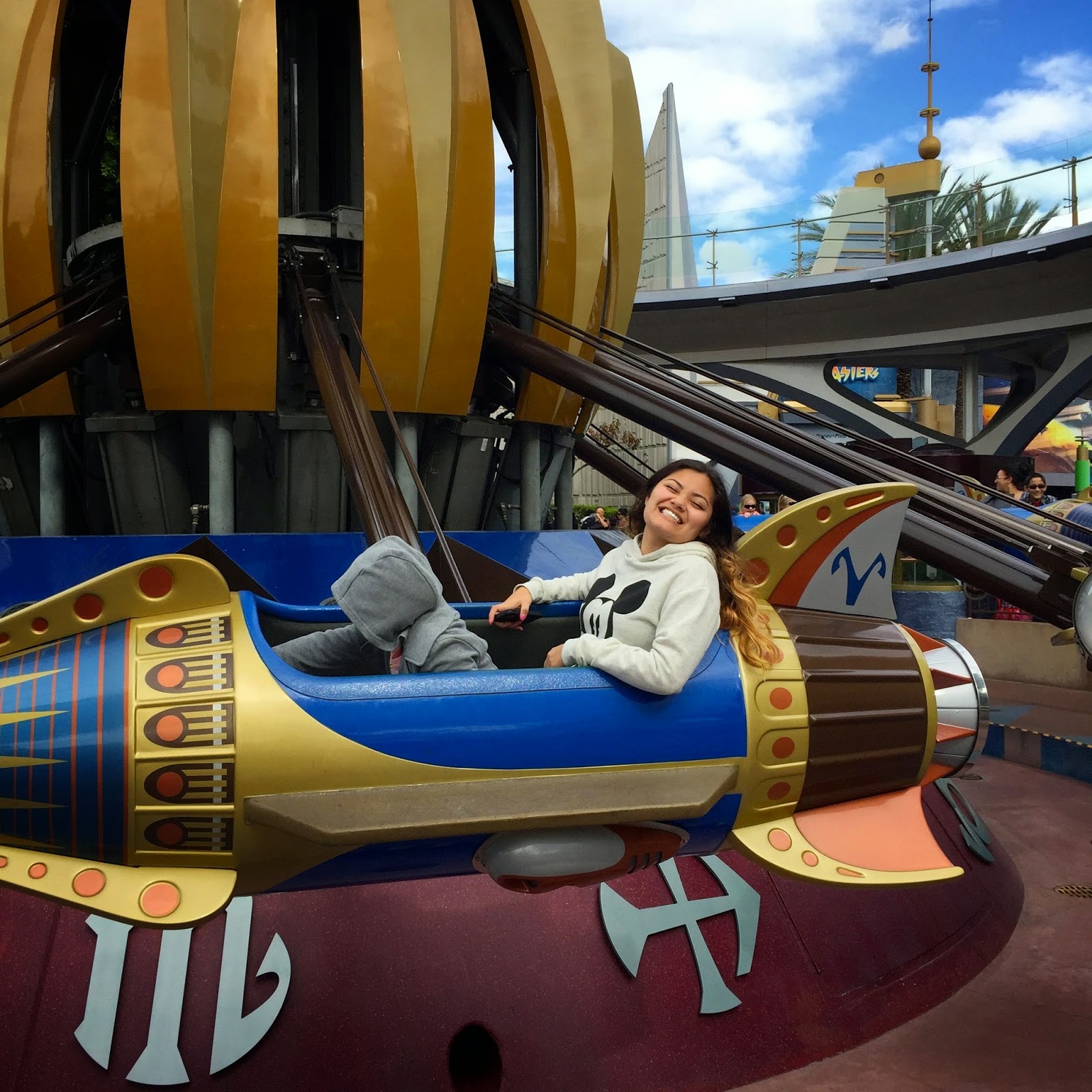 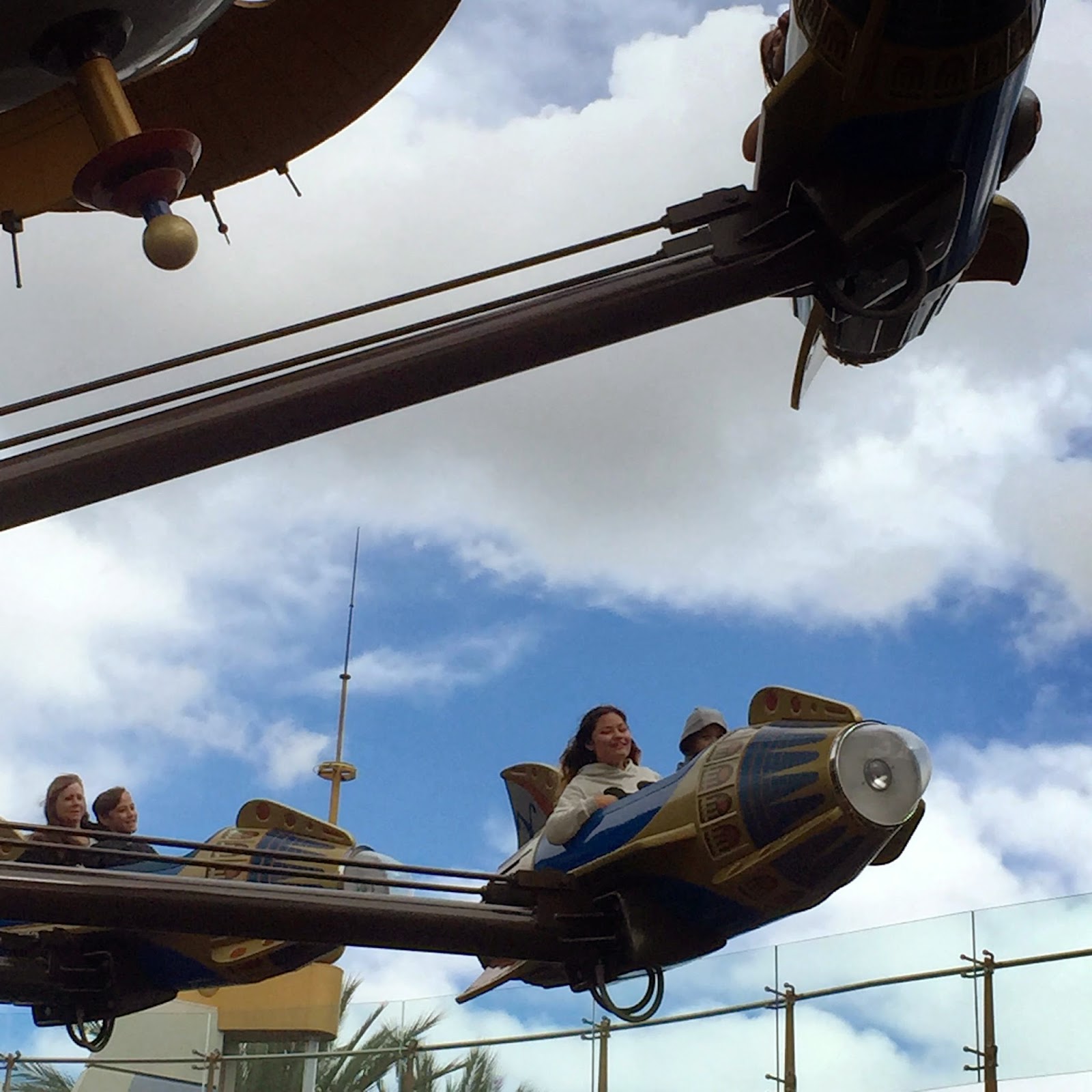 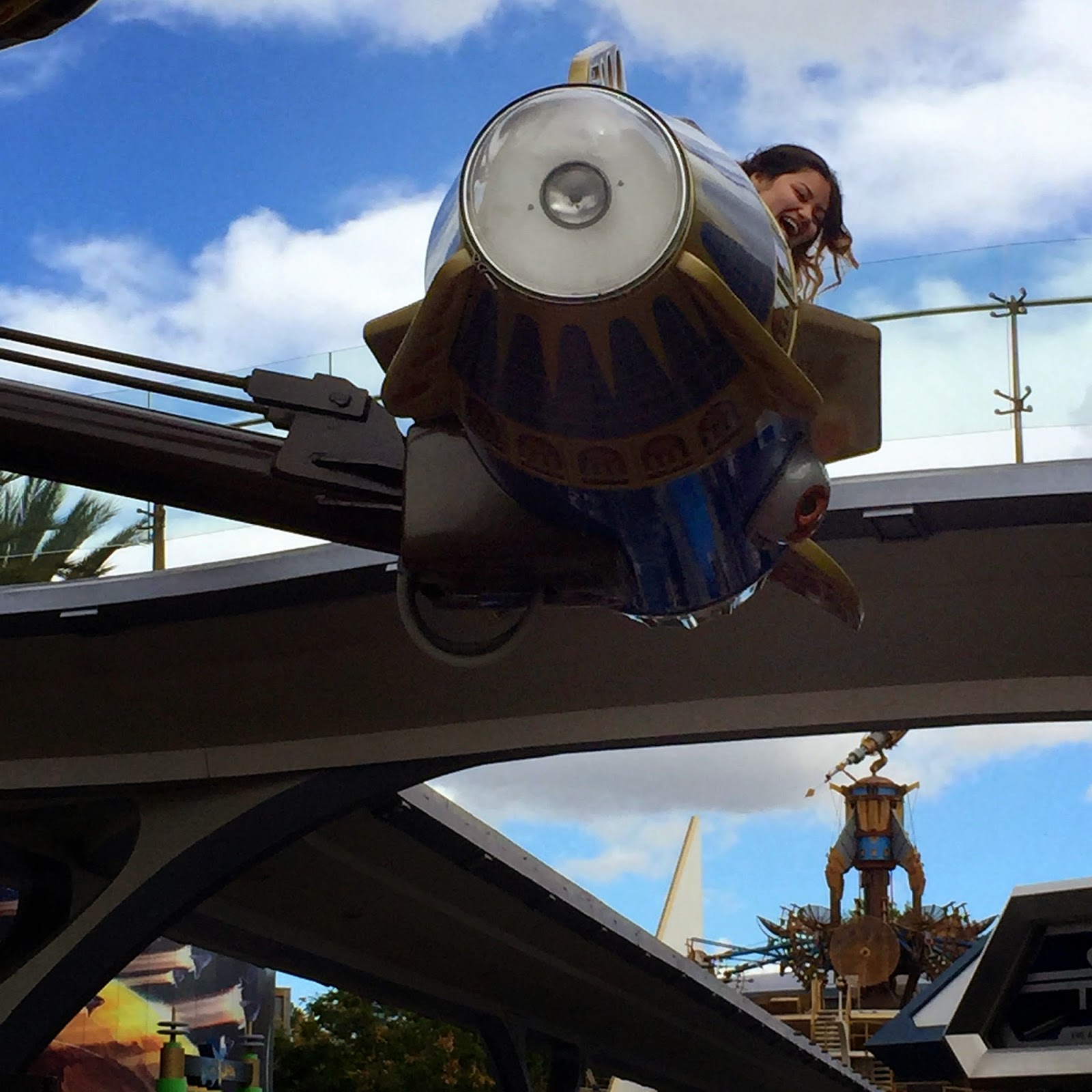 i'm not a fan of spinny-type rides, so i stayed right where i was, safely on the ground.  as i waited near the exit, this colorful band strolled by: 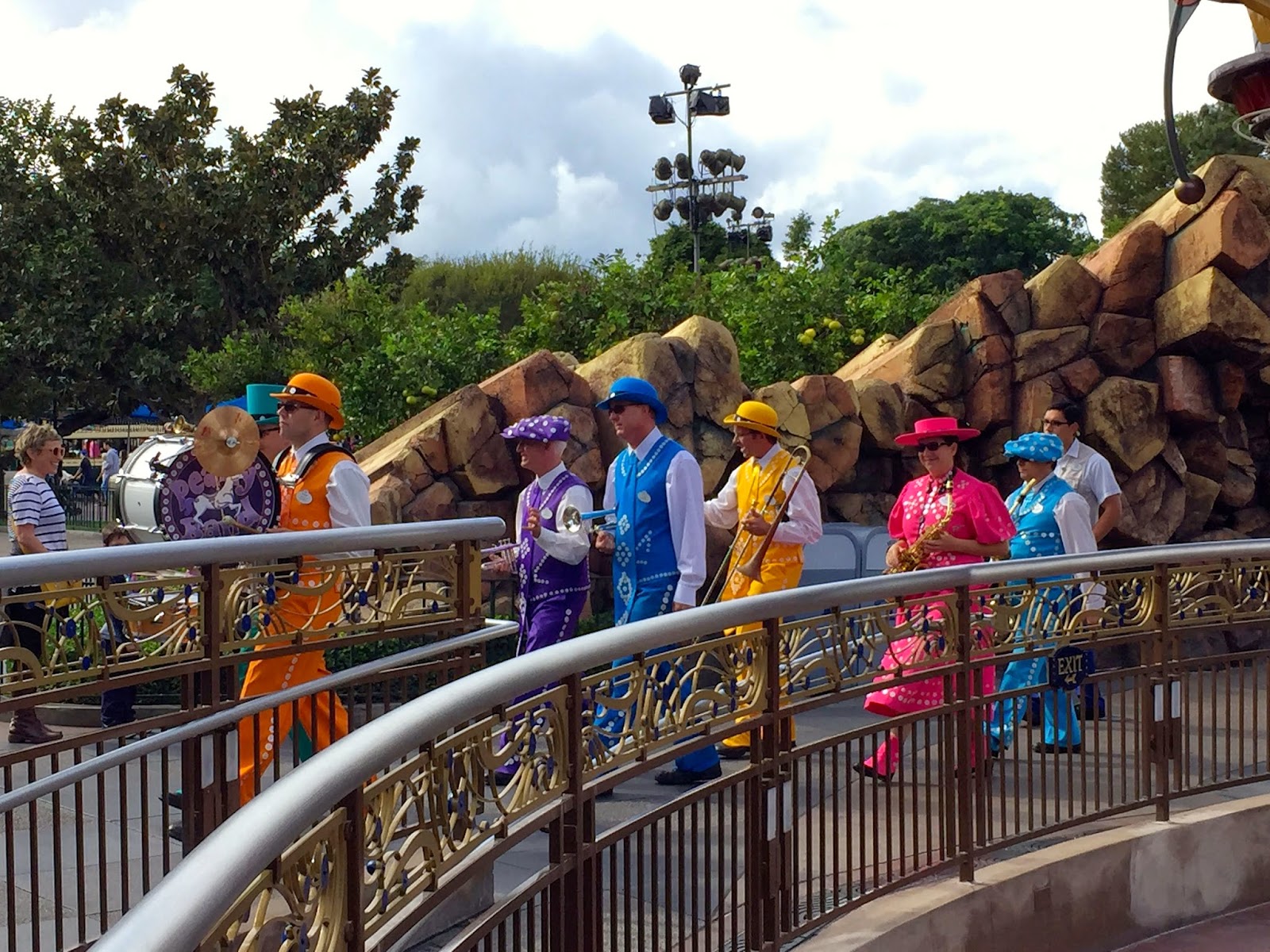 the bean decided that she really liked that ride.  yay! 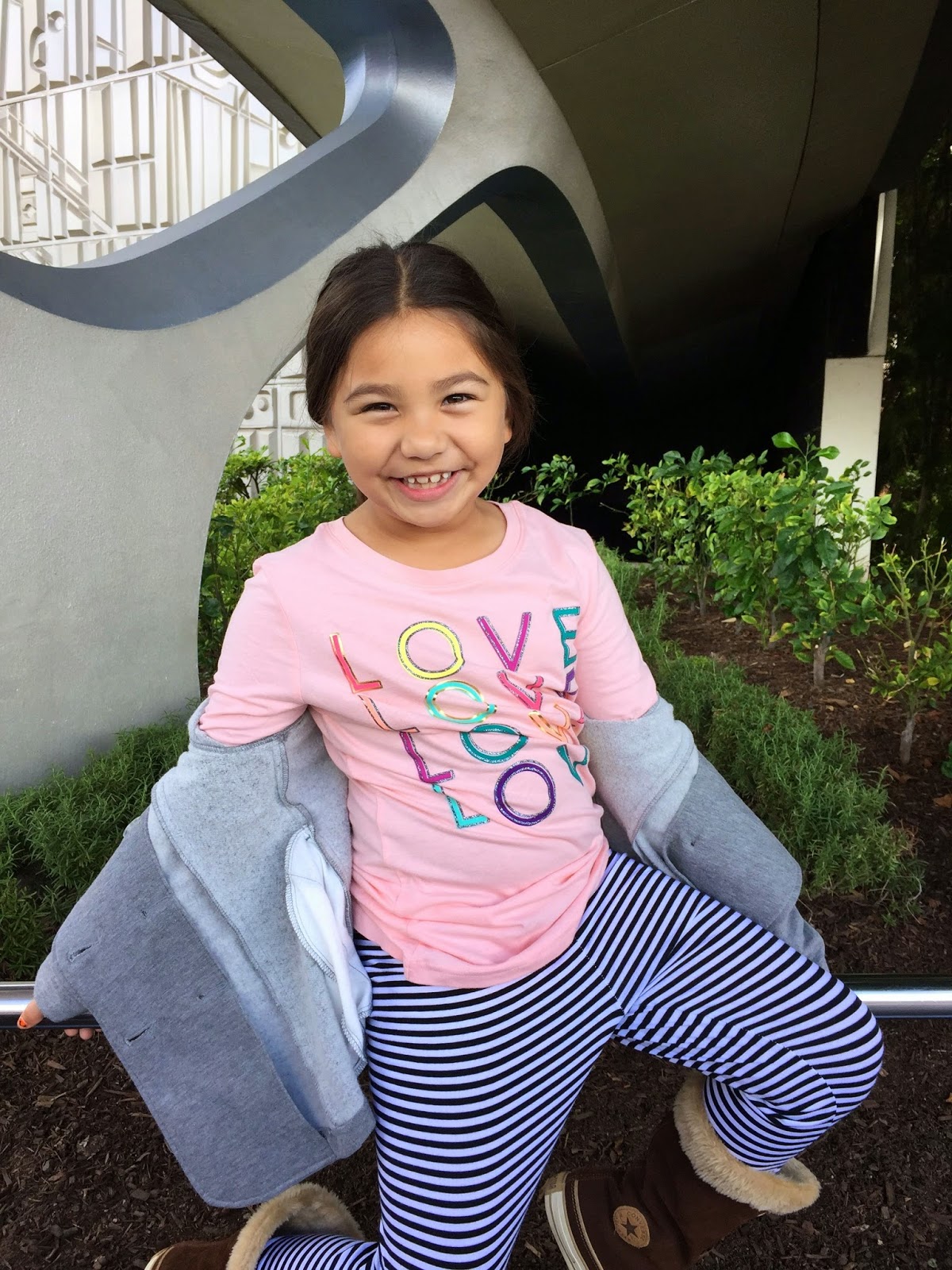 the weather and not being able to play in her soccer game brought her down a little, though.  so we sat down in the hub near the castle to relax and do a little peoplewatching.  or, more accurately, duck watching. 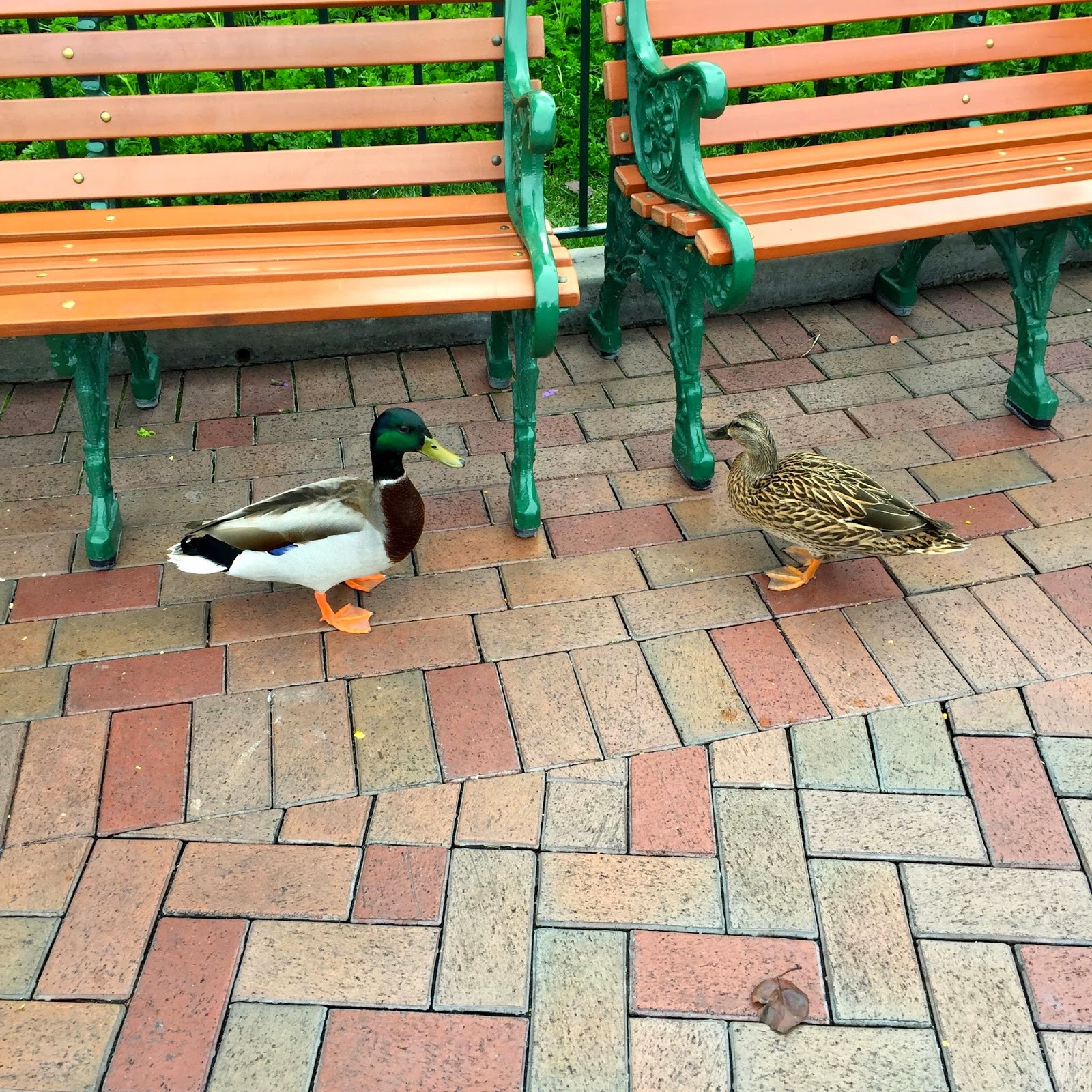 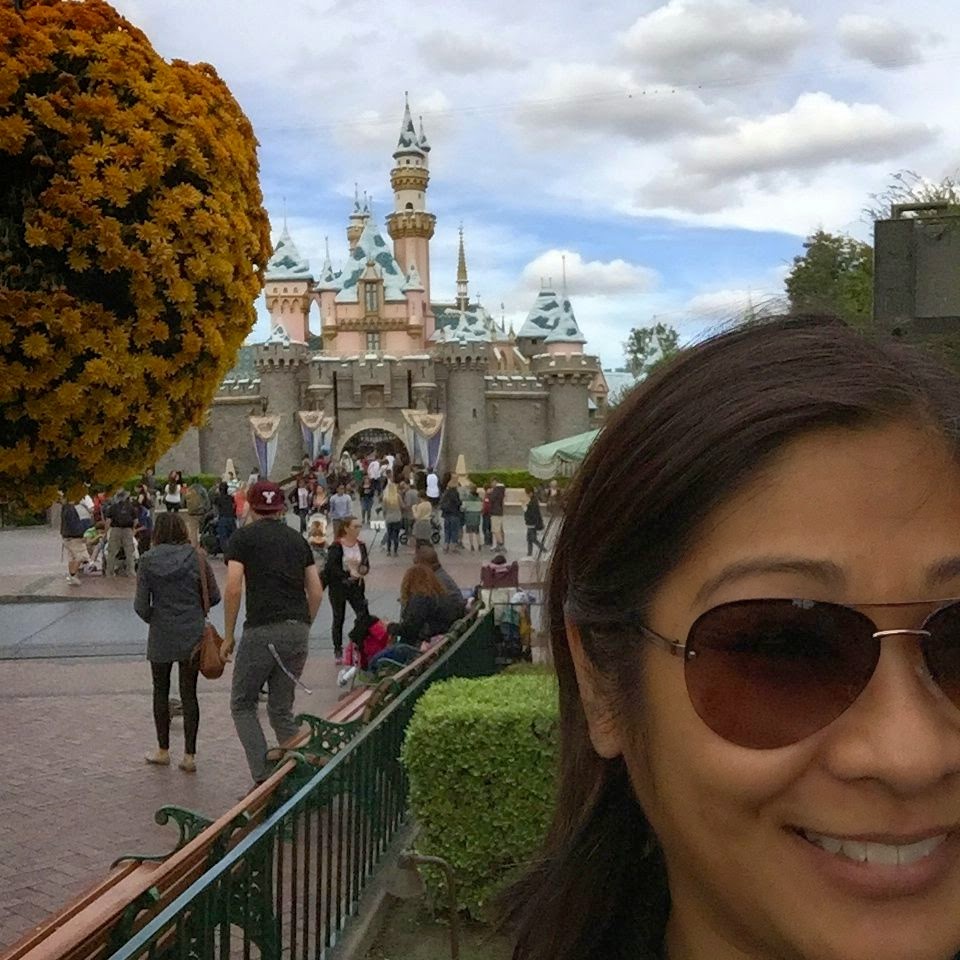 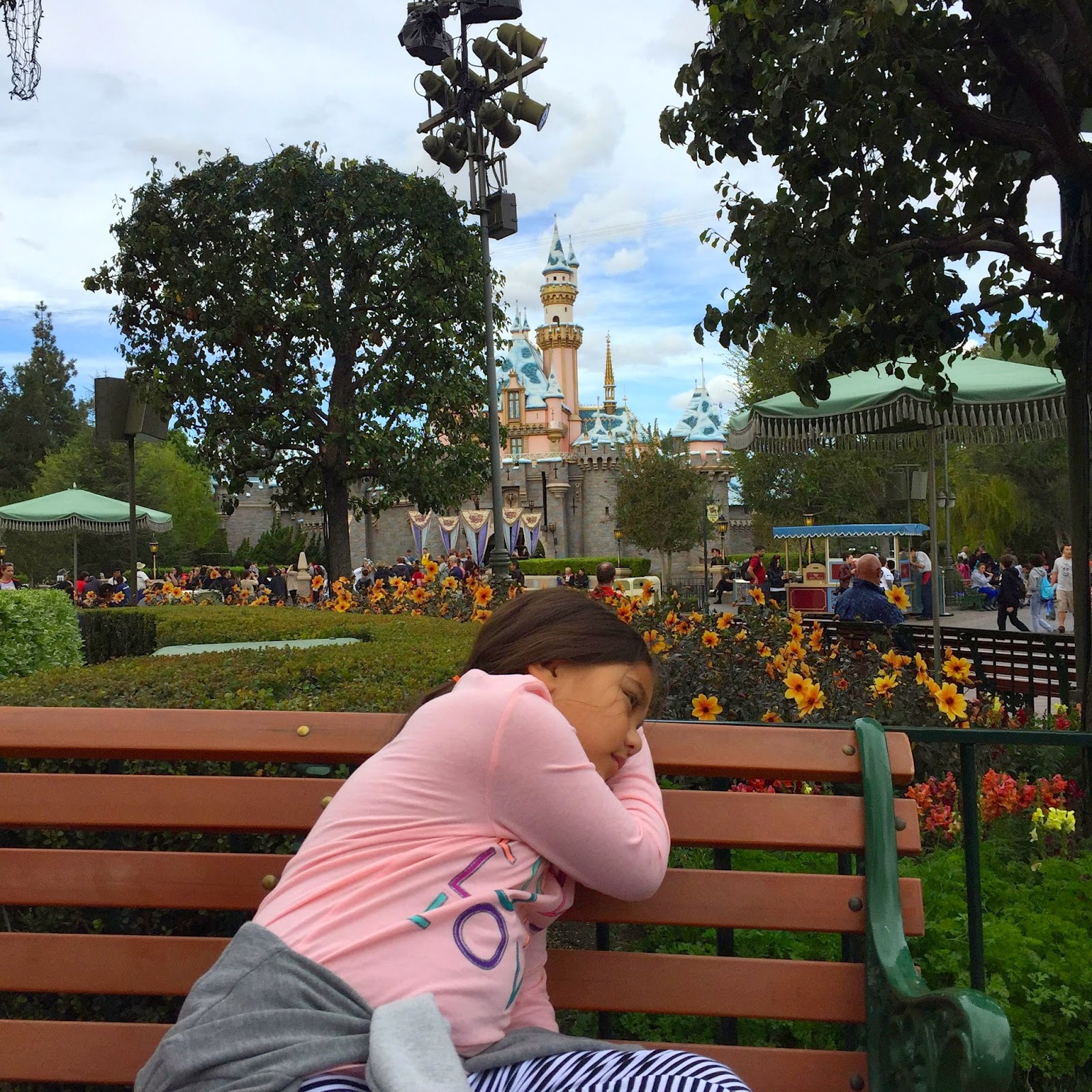 the promise of some gooey mac & cheese cheered her up, though, along with one of these: 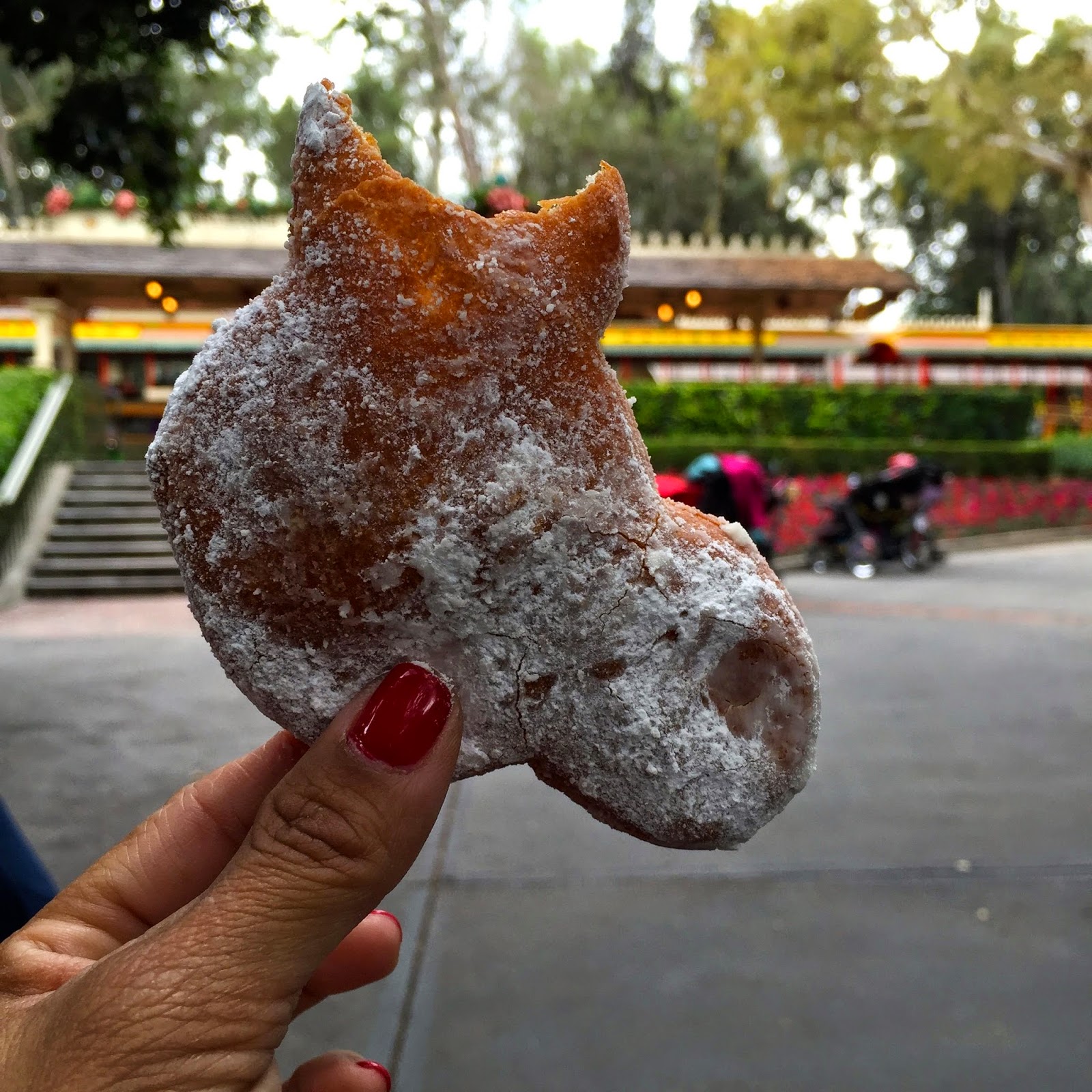 we took her across the way into california adventure to go and draw a character in the animation academy, which made her happy.  and then we were done.  before we even got to the freeway, she was out like a light. 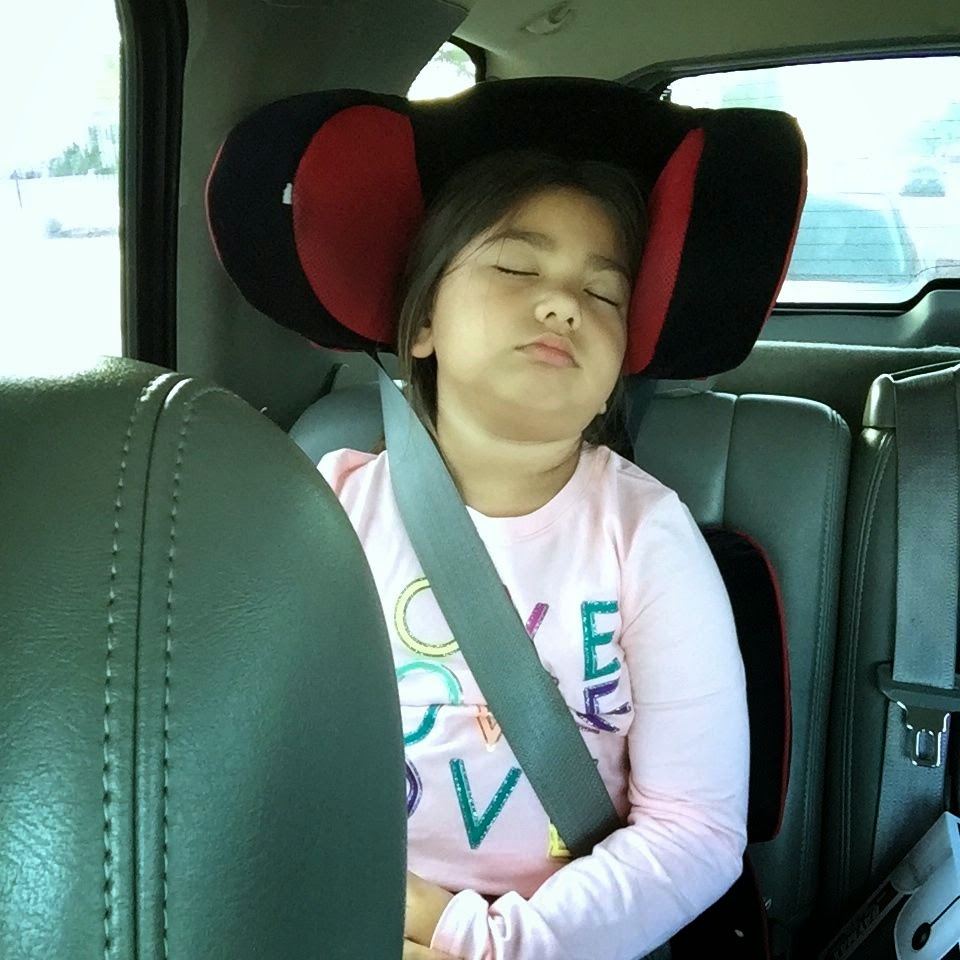 the teen and i decided to grab a pick-me-up at starbucks, where we were simultaneously excited and appalled at the sight of this: 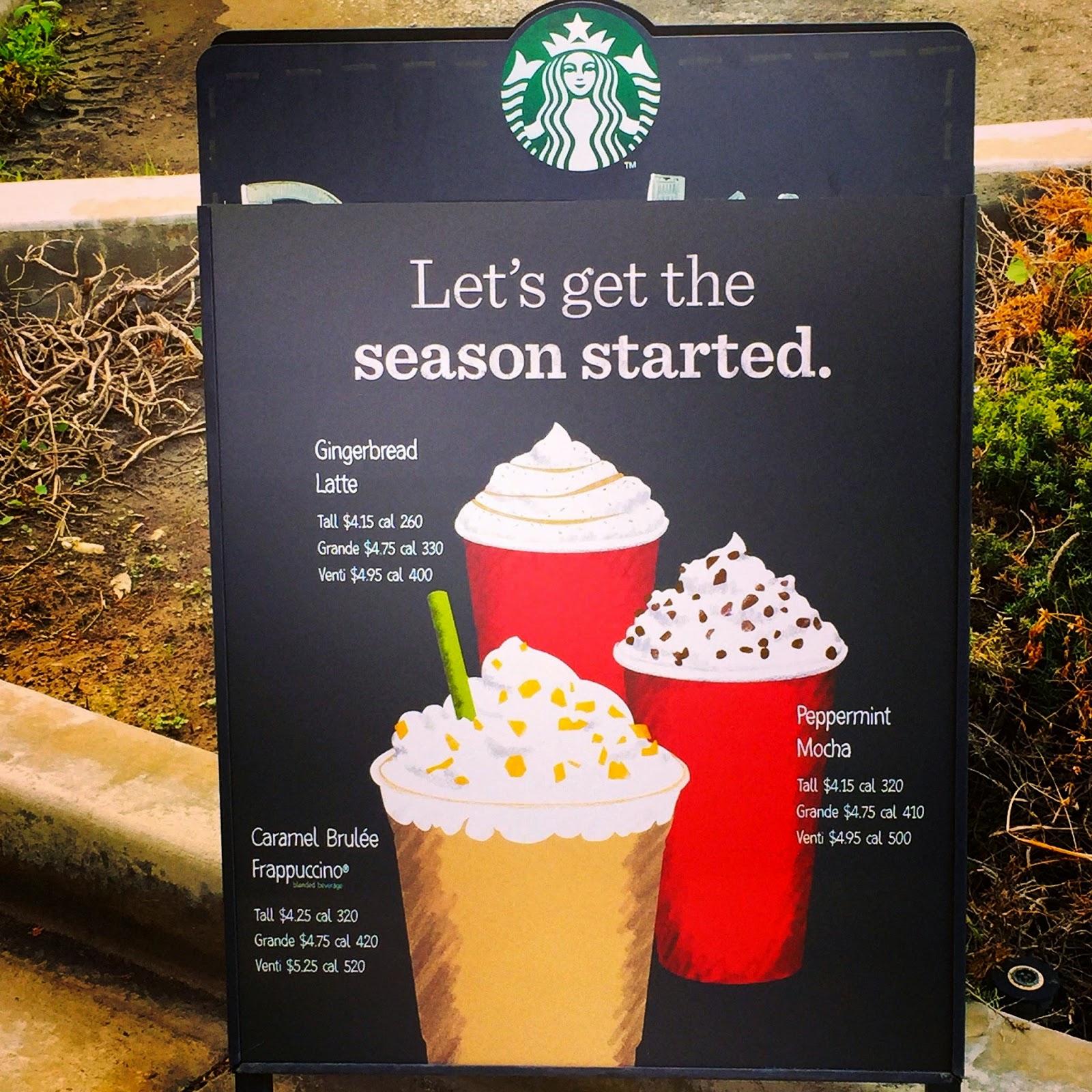 it just seems SO early.  then again, it is november now, so i suppose it really isn't that bad.  i guess.  hmm.

later that evening, the bean happily opened her new toy and cuddled him for the rest of the night. 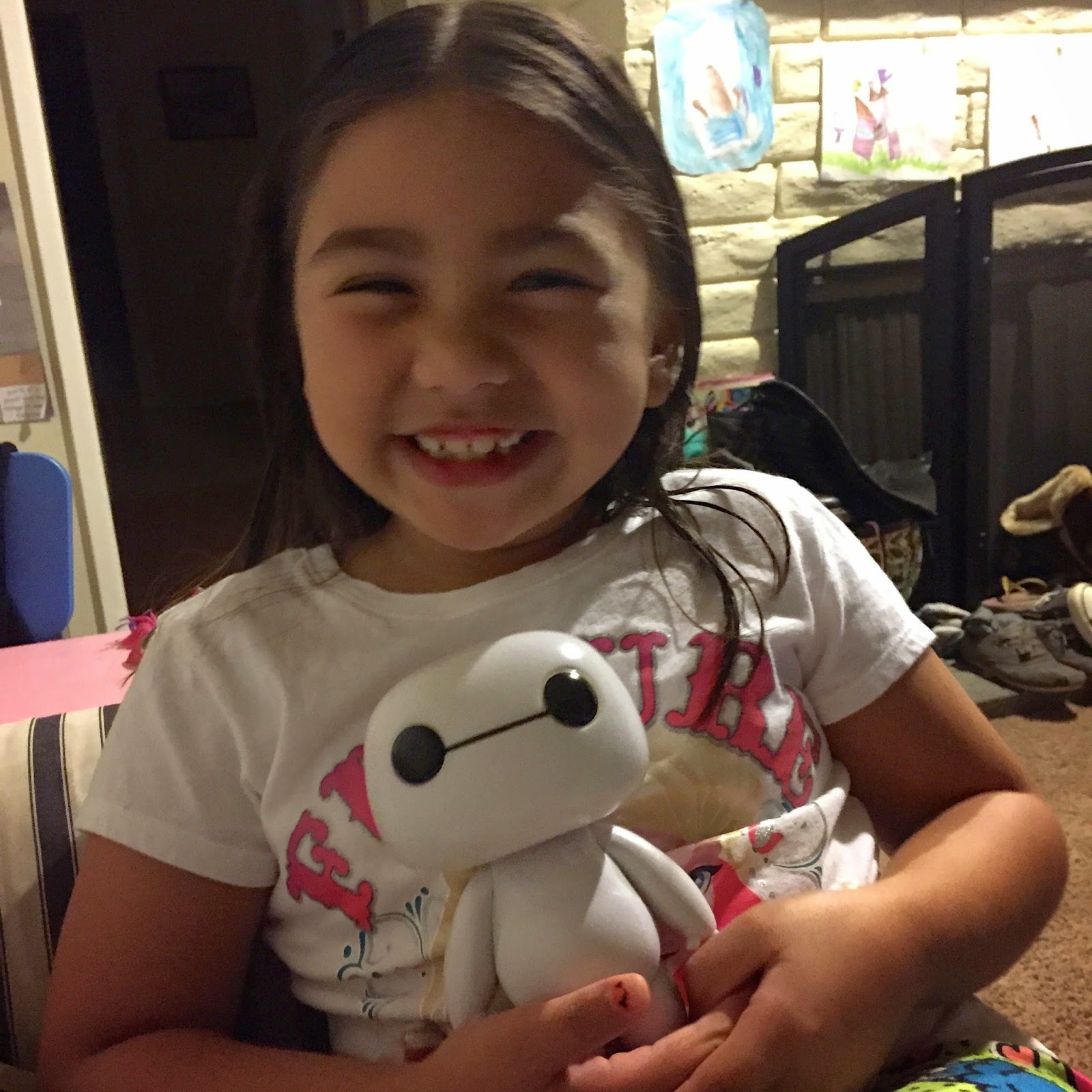 Email ThisBlogThis!Share to TwitterShare to FacebookShare to Pinterest
Labels: disneyland, going to the movies