dipping a toe back into the running pool

it's been forever since i did a race.  remember a few years ago when i was doing some sort of run damn near every weekend?  the burnout hit hard, i guess.  i haven't done a race since january's star wars half!  sheesh.  i've only gone out for a run - and nothing more than 3 miles at that - maybe two or three times since then.  and we're in april!  yikes.

now usually, around this time i'd be gearing up for the hollywood half.  i've managed to hang in there with that race for the last five years straight.  alas, that all changes this year.  i'm losing my legacy status because i just didn't have it in me to do any training and i already know what it's like when i try to run a half without the proper training beforehand.  i'm actually really sad about this, because hollywood was my second half marathon ever and i've met a lot of really wonderful friends as a result.  not to mention, it was kind of fun to be able to say i was a legacy runner for it.

the silver lining of skipping hollywood means that i finally get to do a local 5K at the santa anita race track that i've been wanting to run forever.  it always falls on the same day, and when i finally faced the fact that i just wasn't going to be able to swing hollywood this year i decided to go for it and register for this one.  i'm pretty excited, because it'll be nice not to have to either cough up $$$$ and stay at the W hotel or get up before the asscrack of dawn and either drive or ride the train to the start line.  5Ks are also fantastic because they usually have a pretty easy start time...like this one doesn't even start till like 8:30.  excellent.  i'm heading to santa anita mall to pick up my bib this afternoon and hey, whadda ya know, there's a brand new hello kitty mini cafe opening up just steps from bib pick-up.  it'll be insanely crowded, but at least i can catch a glimpse of it.

and this also means that maybe next year, i can find a team to join to run the so cal ragnar relay race.  it's also an event that always coincides with hollywood, and since i ran the vegas ragnar i've been dying to try my hand at this one.  i'm trying to sweet-talk the hub into signing up to be a van driver, because i think it would be super fun to have him along for the ride.  we'll have to see about that.

in the meantime, sparkle athletic hit me up again this year to see if i was available to fill one of their volunteer spots for the race.  each team is required to provide two volunteers to help get things set up, hand out bib packets to the teams, and all sorts of other tasks necessary for making sure a race goes smoothly.  this year i snagged a spot helping to set up the merchandise tent at one of the major exchanges.  i headed down to santiago canyon community college in santa ana yesterday to do my duty, and pulled up just before my 11:00 shift start time. 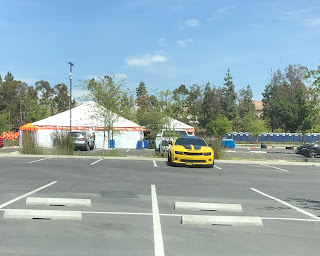 it was pretty easy - just helping to put up racks, sort all of the merchandise, unbox and hang the apparel, basic stuff like that.  i was originally scheduled to work 11:00-4:00, but about halfway through the shift we found that everything was pretty much in place and ready to go. 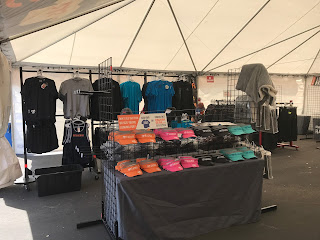 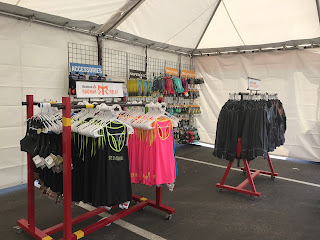 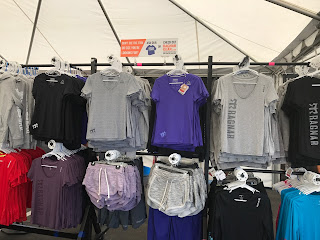 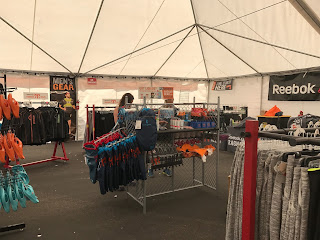 maybe they've had it all along, but i never noticed that they had gear for kids too.  so cute. 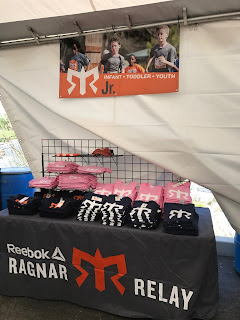 and these recovery flip-flops - they're super ugly, but so soft and squishy.  i bet they're comfy enough to withstand a full day at disneyland. 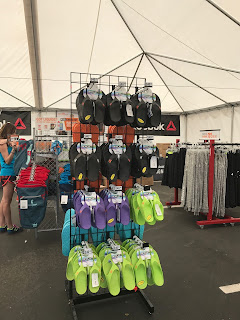 the beach towel was nice too. 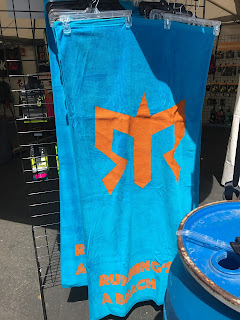 and this year's finisher tees: 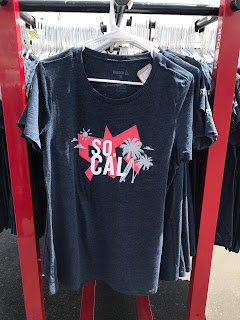 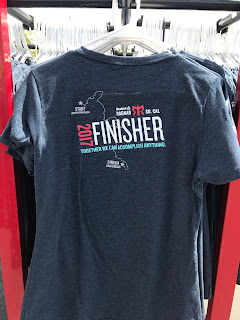 they had a lot of new merchandise that i would've loved to snap up, but i'm not one to purchase stuff for a race i didn't actually run.  this just means that i'll have to sign up next year so i can snag some new ragnar gear.

i was pretty excited to be released way earlier than originally planned, which meant that i wouldn't have to sit in traffic all the way home and i'd be able to pick up the bean from school after all.  the hub was on deck to do it, but was also a little frazzled with setting up an event for the lounge at a local bar.  yay for getting out early! 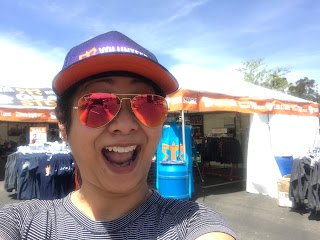 i even managed to get back with a solid half hour to spare, so i busted out something i've been holding on to since i got it for christmas... 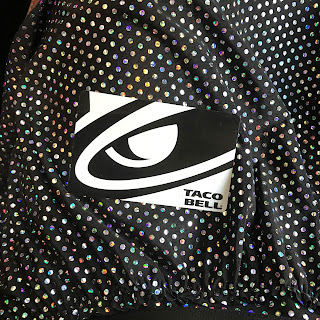 mmmmmm.  doritos tacos and a beefy fritos burrito.  i was one happy camper.

good luck to all my ragnarian friends this weekend!  i'll be one of you next year!
at April 07, 2017

Email ThisBlogThis!Share to TwitterShare to FacebookShare to Pinterest
Labels: ragnar relay, running my ass off, volunteering