i've always wanted to go to a fancy gym.  you know, like where they have all of the coolest, most state-of-the-art equipment and a ton of different group fitness classes all day long and fully stocked locker rooms with a hot tub and a sauna (even though i hate those because i'm not one to get hot and sweaty on purpose like that) and a spa and some of those nice cool scented towels.  the closest one of those to us is all the way in pasadena, which is way too far for me to go on the regular for a workout and probably costs an arm, a leg and a big toe to join anyway.

but a couple of my friends are members of a place like this.  and i've been bugging one of them to join me at a barre class for ages and ages.  we finally got our schedules lined up last week and she made the drive up to la verne to meet me at xtend for a class, and it also just so happened to be the one that marked the return of one of my all-time favorite instructors from maternity leave.  that was a great barre day. 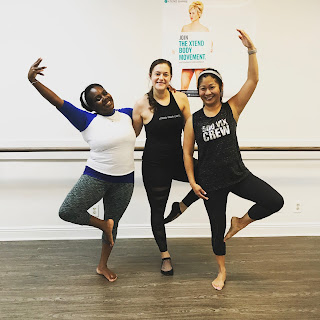 kirkette said she really enjoyed the class and hoped to come back soon, but in the meantime invited me to come down and spend a morning with her at the equinox gym she was a regular at.

she didn't have to ask me twice.  not even a whole week after, i dropped off the bean at school and headed down to irvine, where i found that the gym was located in a gigantic multi-building office complex. i managed to find a parking spot that was neither for visitors (because it had a 2-hour limit and i knew we'd be there for longer than that) nor reserved, and made a mental note as to what level i'd left the car on.  i also managed to get a little lost on the way to the gym, but finally figured it out and ran right into kirkette as i headed towards the entrance.  we took this to send to our friend diane, who worked super close by and would be there for class at lunchtime. 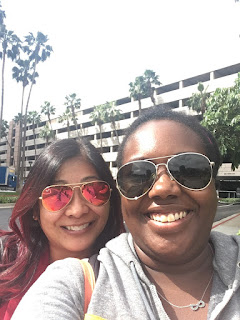 it was fun to see kirkette in her element as she toured me around the ginormous facility.  she knew most of the people we passed and introduced me to all of her buddies.  we grabbed cups of ice water, placed our bags into lockers, and she took me through all of the levels and showed me where everything was.  i'd left my phone in the locker and it wasn't really appropriate to take pictures anyway, so you'll just have to take my word for it that this gym was pretty freaking fantastic.

we took a pilates class first that worked core muscles and got me nice and stretched out.  i was pleased to see that i was able to hang pretty easily since a lot of the moves were similar to ones we do at xtend.  we had a little break between classes, and then it was time for something that scared the shit out of me...and it was called "full throttle."  holy crap.

the class consisted of 3 circuits with 3-4 exercises in each.  you had 3 minutes to get through all of the reps, and the instructor wrote the sequences on the giant mirror that hung at the front of the room. we grabbed a heavy and medium set of weights and a bosu ball, and after a warmup that consisted of jumping jacks and several other basic exercises, we got started.

the first circuit had us doing pendulum lunges with weights in hand, rows while balancing on the bosu ball, and then oblique crunches on the bosu.  then the class was divided in half, with some of us going out to run up the stairs to the top floor of the building and back while the rest of the class held plank on the floor.  when we got back to the room, we traded places and then got set up for the next circuit.

we started off with dead rows balancing on one leg holding heavy weights, then did kneeling shoulder presses and then planks on the bosu while raising alternate arms (and legs, if you could handle it).  once that circuit was done we went straight into the last one, where we did squats holding heavy weights, floor-to-ceiling snatches (yeah, i laugh at that term every time), shoulder presses while laying on the bosu ball, and then sets of 20 mountain climbers in plank.  the last round of cardio had half of us running up all those damn stairs again and then doing a wall sit, capped at 90 seconds.

i was pretty much dead by the end of that class, but was proud of myself for completing all of the reps for each circuit in the 3 minutes we were given.  i snuck this using kirkette's phone, which she'd brought as she wanted to show a picture to someone in the front office. 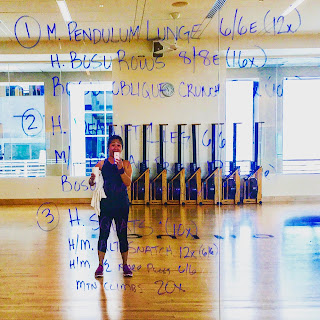 granted, i wasn't using very heavy weights - i'd picked up a set of 8s and 10s, not knowing what to expect while not wanting to kill myself.  and by that time it was 1:00 and i had to get going to beat traffic and pick up the bean from school.

remember how i'd made a mental note as to where i'd left my car?  yeah.  in m post-workout haze, i totally got mixed up as to which level i'd been on and then where exactly on that floor i'd parked.  i went up and down the stairs probably another ten times as i wandered around looking for the damn car, and it took me a solid THIRTY MINUTES to finally find it.  it was like a third freaking workout, and i was exhausted by the time i finally slumped into the driver's seat.  i lucked out and didn't hit any traffic going home and even had ten minutes to spare by the time i got to school.  whew.

i was completely sore for two days afterwards.  but do i want to go back for another round some day?  HELL YEAH.  bring it on.
SaveSave
at April 28, 2017

Email ThisBlogThis!Share to TwitterShare to FacebookShare to Pinterest
Labels: friends make everything better, working out