still no scott foley for me

i'm a couple of weeks behind here, but in case you were wondering - yes, i sure did get to attend the scandal panel at paleyfest 2017.  i know you were on the edge of your seat about it, so you're welcome.  yes, you can sleep well tonight now.

alas, our group was missing a couple of ladies due to kids' illnesses at the last minute.  the silver lining was that i was able to get my co-leader to join us, and she was stoked because she's a big scandal fan too.  she met me and my friend AMP at the train station and we hopped on the gold line to union station, transferred to the red line and got off at the hollywood & highland station.  easy peasy.

this was my third year in a row of scandal/paleyfest and i was still super stoked to see this: 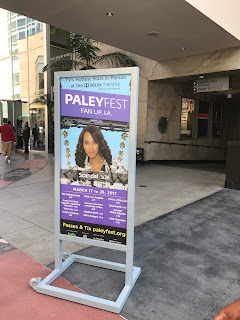 and then we continued our tradition of pre-paleyfest grub at california pizza kitchen.  it was a little different this year though, because instead of an evening presentation the panel was to begin at 2:00 in the afternoon.  no biggie.  you can still have dranks during the day.  cheers! 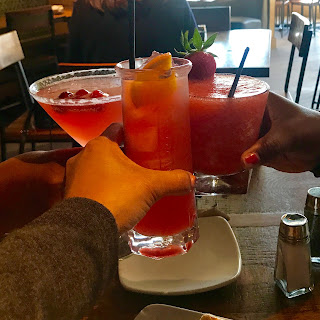 i think i order this every time too - the asparagus and spinach spaghettini with grilled salmon.  whatever.  it's always tasty and sorta healthy-ish...there's veggies in it! 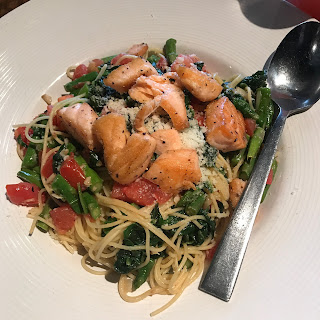 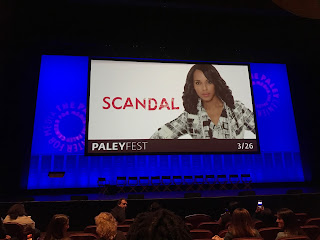 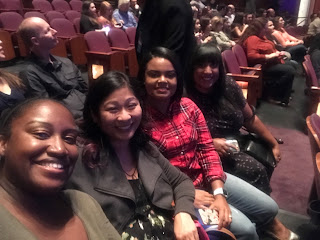 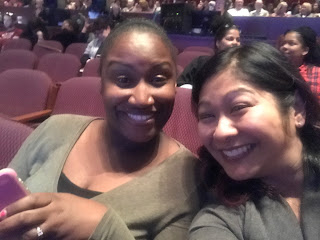 i was a little bummed that no one was willing to come with me to see this panel.  prison break used to be one of my favorite shows, and i'm excited to watch the reboot. 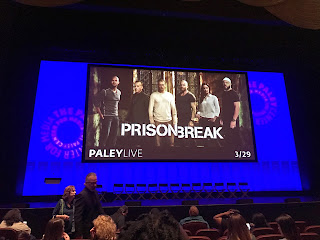 hottie jesse palmer, former football player, occasional good morning america contributor and apparently the star of season 5 of the bachelor (heh, i don't even remember him and i thought i was a bachelor superfan) was the moderator for the panel. 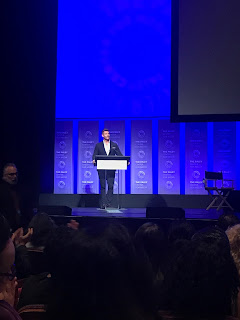 although the panel had been advertised as a celebration of the 100th episode, which led us to believe we were going to get to SEE it, we were treated instead to a screening of the pilot episode so we could relive where it all began.  while we were a little bummed not to be treated to a sneak preview of an as-yet-unaired episode, it was still fun to watch the very first episode of the show we all love so much.  and when it was over, the good stuff started as jesse introduced the cast one by one.  they all came out, waved to the audience, took their seats and got themselves mic'd up. 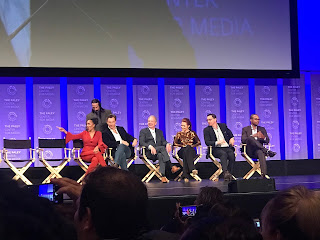 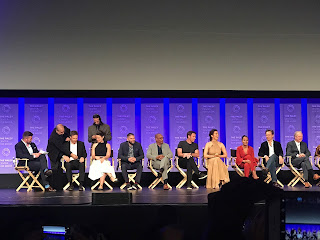 everyone was there, although there was no shonda this year. 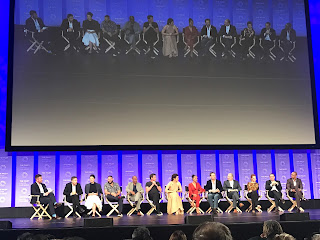 it was the usual banter back and forth between the cast members, with a lot of laughter and also a good amount of emotional moments mixed in.  they praised each other quite a bit, which would bring them to tears, which in turn would make a lot of us tear up a little.  you know i'm a sap like that anyway.  they talked about their favorite moments, either on or off the show, and kerry washington's was when the ladies all came to visit her after the birth of her first chid.  and, i'm assuming because of the absence of shonda, we didn't get a whole lot of insider scoop on what to expect for the rest of the season.  the only teaser we got was that the 100th episode, scheduled to air in a couple of weeks, will be in the "what if?" style.  we'll get to see how the characters would have turned out had things not gone the way they did.  from the secret smiles and giggles amongst the cast, it sounds like it'll be a really great episode. 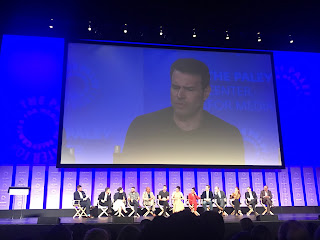 speaking of scott, he took a little teasing about his dancing on the show, to which he replied "i fucking love to dance."  prove it, scott.  and so he did.

now, despite an announcement made before the panel began asking everyone not to rush the stage when the panel was over, that's exactly what happened.  and the audience wasn't even slick about it - we watched one girl literally hurdle the seats in front of her to get up to that stage.  people lost their damn minds, and you'd think there was a million dollars up for grabs up there the way they were acting.  it was ridiculous.  and OF COURSE we joined in...we just didn't go crazy like everyone else did.  we made our way up there in an orderly fashion, which is why none of us got anywhere near the stage.  heh.  but i did get a few decent photos.  here's bellamy young, aka mellie.  she comes across as the sweetest, friendliest lady ever - both at paleyfest and on her twitter feed. 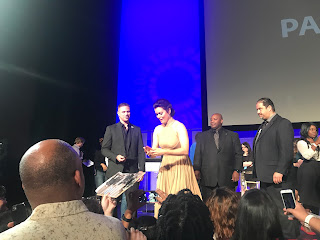 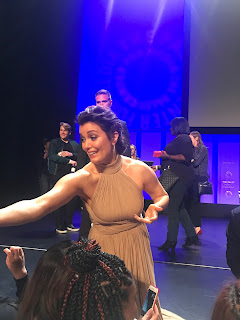 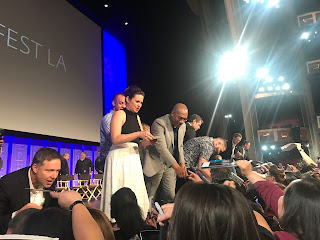 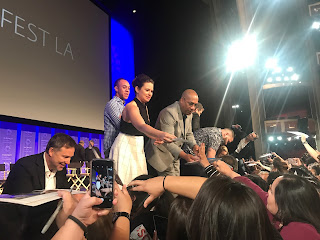 because she's so much taller than me, my co-leader managed to get her phone to papa pope to snap a selfie.  i was super jealous until she got it back and looked at what he'd gotten and found...this.  i drew an arrow so you can see that she was, in fact, in the shot.  bwahahahahahaha! 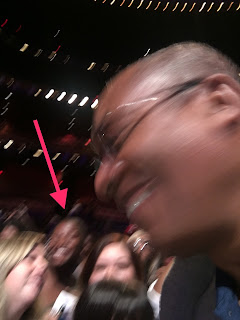 this is george newbern (charlie).  i will always and forever think of him as bryan in the "father of the bride" movies and that weirdo danny in "friends." 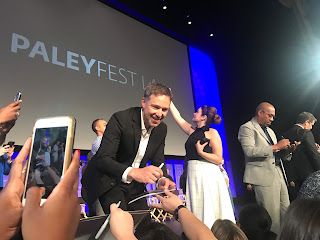 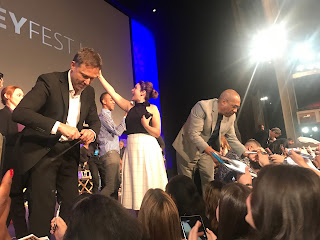 alas, for the third year in a row this is as close as i got to my man scott foley.  at least he stuck around this year, unlike last year when he bailed as soon as the q&a was over. 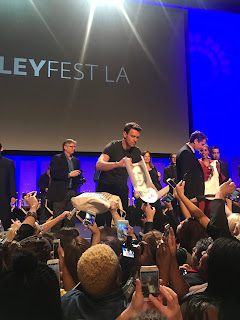 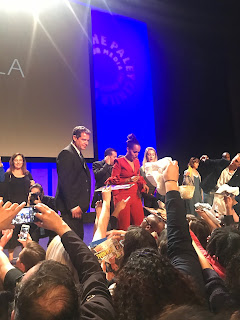 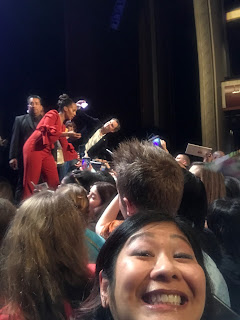 we settled for a group shot in front of the empty stage when everyone had left. 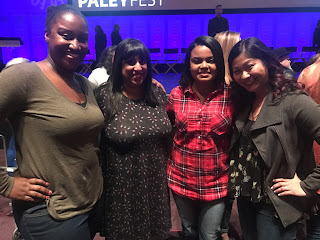 a churro seemed like a good way to cap off a fun day, and so we stopped here to grab a treat: 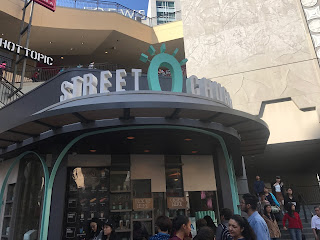 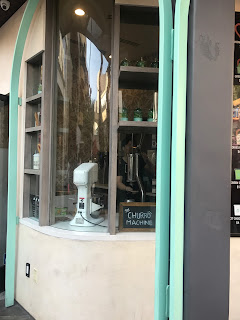 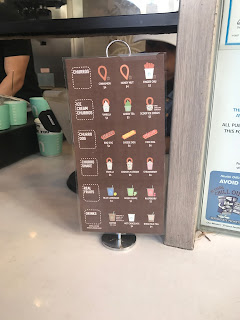 i could not get over the item called "finger chu."  i get it...bite-sized churros, use your fingers, whatever.  say it out loud and tell me that shit doesn't sound wrong as hell.  and so you know i had to order it...finger chu with chocolate.  SAY IT OUT LOUD. 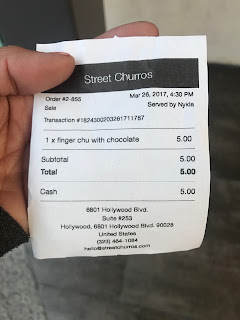 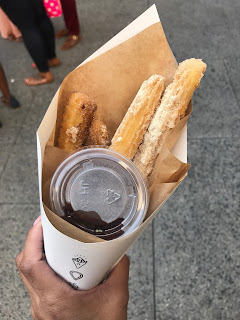 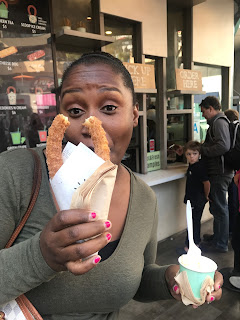 we found a table at starbucks, where a couple of us grabbed a drink to go with our churros, and rehashed everything we'd just seen and done.  it was a fun time like always, and then we parted ways to hop onto the train and get home.  while it does take a little longer than driving, it's so nice to just sit there and just glide through the traffic and chat and not worry about a thing.