the bean's last big school project was one we'd been looking forward to all year long - the egg drop.  they were tasked with creating some sort of capsule built to protect a raw egg inside while being dropped from the top of a 12-foot ladder.  having worked with her on homework and other projects throughout the year, i handed this one over to the hub and sat back to watch.

they had to work on a planning worksheet first, due several weeks before the capsule was to be turned in.  and so one saturday while i was out with friends doing i don't even remember what anymore, the two of them put their heads together, scoured youtube and google for some tips and ideas, and got to work.  by the time i got home, the bean was carefully writing out their plan on the worksheet and the hub was organizing the supplies they'd picked up at michaels.

when it was time to get started on the capsule, they invited me to come out to the garage to hang out and watch.  it was fun to see the two of them working together to create the project they'd dreamed up together, and she got to work with some tools she hadn't touched before. 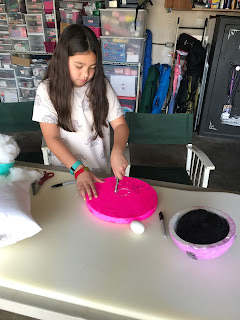 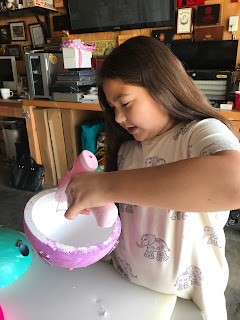 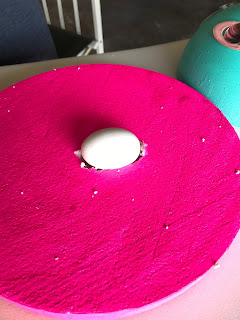 after a few different ideas of how to house the egg, they finally figured out the best way to handle it and put the rest of the pieces together.  i loved how colorful it all was, and how it reflected the bean's super artistic side. 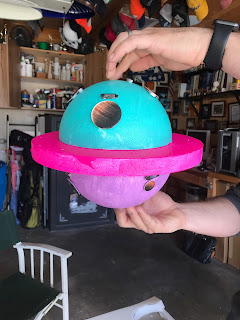 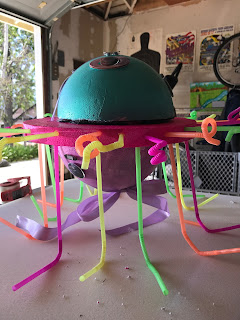 the capsule sat around the house for a couple of weeks, through spring break until the sunday before it was due to be turned in.  that's when we finally decided to take it to the hub's lounge for a test drop from the roof - more than 12' high, but at least we'd see if it worked or not.  and happily, it went exactly as they'd envisioned and sailed down slowly and carefully underneath the humongous parachute that was the final piece of the puzzle.  when she lifted the lid, the egg was intact - success!

the entire third grade gathered outside at school last friday to watch everyone's project go through the final test - a drop from the top of their 12-foot ladder.  we all met in the classroom to watch the kids make the last few adjustments to their projects and get their eggs in place. 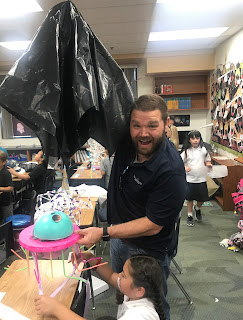 and then it was time to head outside to see how everyone's capsules would hold up to the drop. 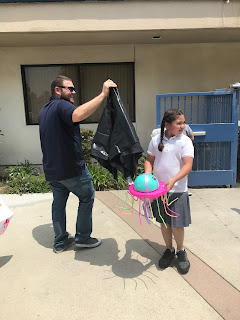 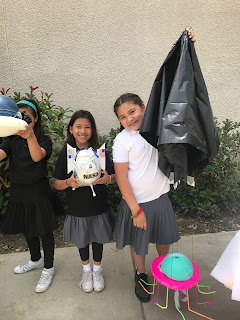 the hub and one of the bean's best buddy's dad were tasked with the job, and they were more than happy to oblige. 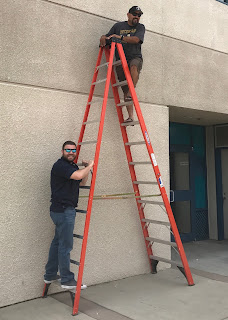 our class had a few casualties, as three of the kids' eggs were cracked upon landing.  i knew the bean was a little nervous about hers, as the drop wasn't as long as our test and we were a little worried about whether the parachute would have time to open fully or not.  wanna see for yourself?  check it out:


the happy ending meant that she would earn a full 100% on her project.  the egg's survival was worth a whopping 10 points, although she would have still managed to squeak out an A had it broken as the rest of the assignment added up to 90.  she was pretty stoked, and her grade remained intact.

we've got just two and a half weeks of third grade left.  i can hardly believe it - this year has flown by like crazy!  but i think everyone is ready for summer.  this year was the most academically challenging, and it'll be nice to take a good long break.