so the bean is signed up for an all star competition cheer team that starts twice-weekly practices next month.  her cheer season ended what seems like forever ago (it's been like two months, heh), and i think she's ready and a little anxious to get started on working with her new squad, which consists of about 30 girls.  she only knows two of them, so i think she's a little nervous about meeting and getting to know so many new teammates.

the cheer coaches put together a team bonding event at downtown disney this past weekend, which turned out to be a ton of fun.  not everyone was able to attend, but there were more than enough to split into several teams to run around the area going through the list they'd been given.  they had to do things like "go to world of disney and take a group pic with everyone wearing mickey ears" and "head to sephora, put on a crazy shade of lipstick and take a group photo."  there were 19 items on the list and they had to be done in order with photographic evidence, which meant there was a whole lot of running back and forth.  here, our group was tackling the "make a cheer bow out of legos" task: 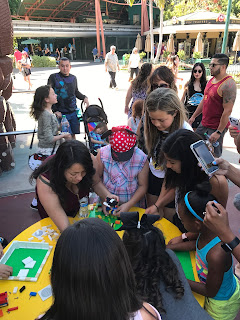 as i scurried along with the team, i finally caught sight of where sprinkles cupcakes opened not too long ago. 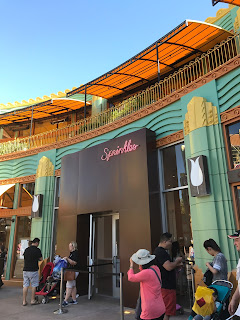 this was where they did the "find a stranger wearing mickey ears and take a picture with them." 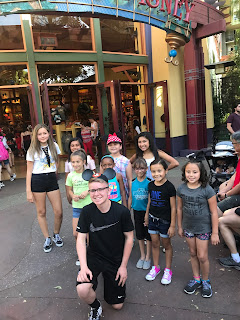 one of the final tasks had them finding a patch of grass to do a stunt on. 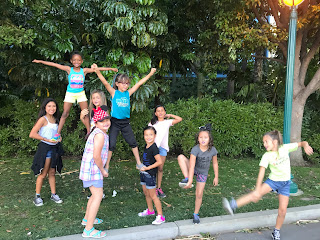 our team was the first to finish the list, and we waited around for the other teams for quite a while.  we were all sent another clue via text message, which we were also the first to figure out, but got outsmarted by another team for the final piece of the game.  the competitive streak in me was pissed, but it was all in good fun and the activity had worked.  the bean had 8 other girls in her group, and while the two she knew were among them, it was good for her to get to know a few more of her new squadmates.  i'd also gotten to hang out with a few of the moms, so we both won.

we'd decided to hit the parks after the game was over, and as we made our way through downtown disney towards the entrance we stopped at a kiosk to try an oreo churro. 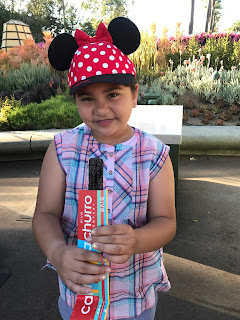 it was really tasty, with a cream filling all down the middle of it. 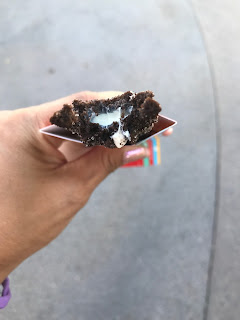 we stopped to browse at build-a-bear and the ridemakers store, where she had a little fun with a pretty pink remote control car: 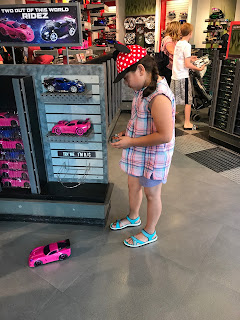 and because we'd worked up such an appetite, we went straight to cars land and grabbed a couple of bacon mac & cheese cones.  we hadn't had these in a long time, and they were just as delicious as we remembered. 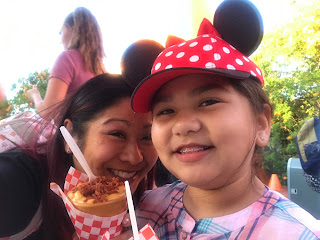 the single rider line at radiator springs races was quoted at 30-45 minutes, and with everything else in the park along those lines as well, we decided to go for it.  cars land is so pretty at night. 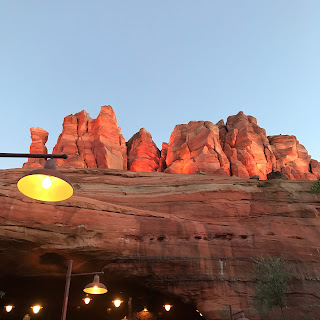 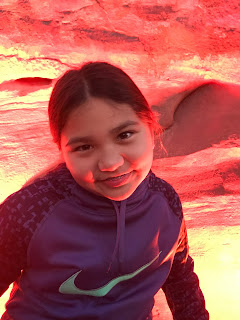 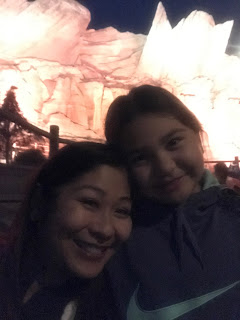 while we were there, we figured we might as well go for a spin with mater, too. 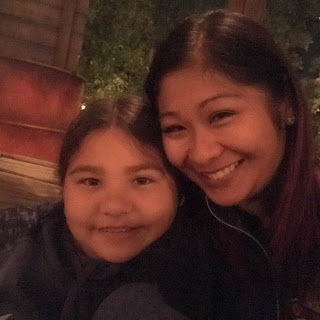 and then we grabbed our free pieces of sourdough bread at the boudin bakery tour and ghirardelli chocolate and bounced outta there as the hordes were gathering for the first of the two "world of color" shows.  it was great timing and we got onto a tram to the parking structure in no time. 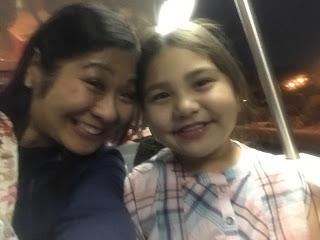 after tucking in the bean (who pretty much fell asleep as soon as her head hit the pillow), i checked out my stats for the day.  not too bad for having been a couch potato for half the day: 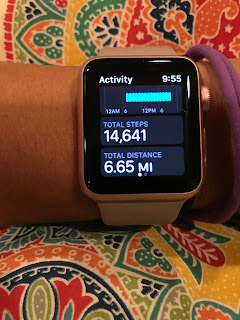 the next team event is a "family meet & greet" barbecue at a local park.  that should be fun, and we're looking forward to meeting even more new friends.
at May 02, 2017