to kick off brother wan's vegas wedding weekend extravaganza, the hub was hopping in the car with the ILs (who'd arrived earlier in the week) and meeting up with the groom to do some bachelor partyin'.  now, since the bean has magically had perfect attendance all through this school year, we had decided to stay behind and drive out with the old lady and her special friend the next morning.  because they both had to work, that would have put us on the road to vegas around 4 or 5 in the afternoon...which would have been a nightmare traffic-wise.

tasked with filling the hub's flask but with no funnel in hand, i improvised and ended up pouring the liquor in one shot at a time. 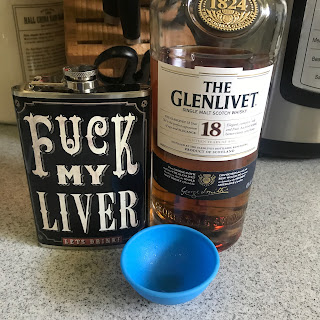 later that day, we headed down to disneyland to hang out and grab some dinner.  the parks were pretty crowded with crazy lines for the rides, so we decided to check out the sneak preview for the upcoming "cars 3" movie. 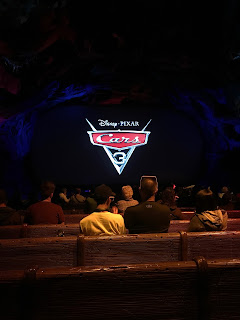 outside in cars land, we headed towards the cozy cone motel area to grab some mac & cheese cones.  as we were munching happily, we spotted one of the "plaids" standing nearby.  i nudged the old lady and said "hey, do you recognize anybody over there?" and the second i said it, i realized i was staring at big daddy himself...adam sander. 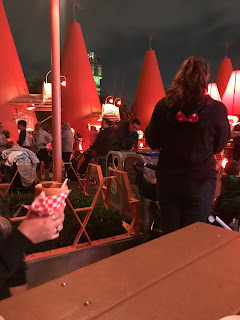 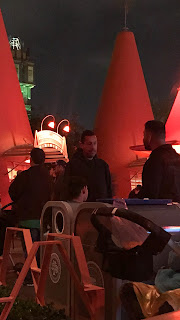 he was smiling and chatting with a wheelchair-bound kid while the cast member stood at guard and kept others from approaching him.  he posed for a few pictures with the kid and his family and then walked away.  the old lady, her special friend and i were chattering excitedly about our celebrity sighting while the poor bean just shrugged her shoulders and continued to enjoy her mac & cheese.  since most of adam handler's movies are chock full of inappropriateness, she didn't know who he was and didn't get any of the references and quotes we were tossing her way.

we got one more look at him when he came back and handed the kid a churro with a wave and a smile.  that kid lit up, as did the rest of his family, and i thought it was such a sweet, classy move on his part.  not that i didn't already like him anyway, but after watching that i'm a fan4lyfe.

here's the old "tower of terror" ride, all redone and set to debut as a new "guardians of the galaxy" themed attraction at the end of the month.  it's all locked up still, but as we spied one of the elevators appear in the opening, we figured that adam had gotten himself and his guests a sweet sneak preview of the ride. 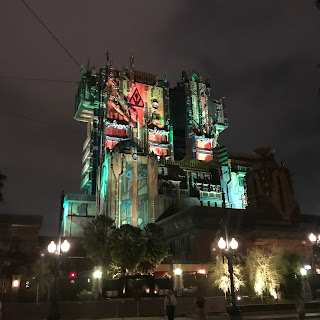 the california adventure side closes a couple of hours earlier than disneyland, and so we made our way towards the exit. 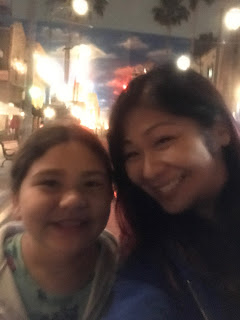 we may not have gotten to do much, but we're always happy to just walk around, soak in some disney magic and do a little peoplewatching before going back home.  ah, the beauty of being annual passholders.
at May 16, 2017