growing up, moving out, letting go

so, about this weekend...

(cruise recaps are on hold just for today)

the old lady and her special friend have been casually looking for a place to rent together for awhile now.  he's been ready to move out of his mom's for months, and they've talked about moving in together for about that long.  they've looked at a few houses and a couple of condos and apartments, searched all of the neighboring cities and a couple of ones further away.  and then finally they came across a nice complex that's literally a mile and a half away from us, with a vacancy that worked out really well for them.  so they decided to put in an application and see where it went from there.

when they came back from the appointment with the leasing manager, she looked completely shell shocked and he just had a big ol' kool-aid smile on his face.  her face was all puffy, and she kept doing this funny cry-laugh that kept me from bursting into tears when they said "we got it!"

and then came the kicker:  "we move SATURDAY."

and the old lady sat down next to me and we did this: 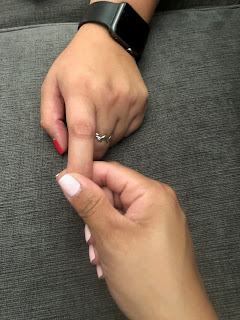 i think everyone was in somewhat of a state of shock.  actually, the bean's first reaction was anger.  heh.  the hub joked that now we could have a gym in the house, while i just kind of sat there and tried to process it all.  the old lady continued to cry-laugh and i was kind of grateful for it because it continued to save me from ugly crying.

and from there everything just moved really fast.  they set up their renter's insurance policy and turned on their electricity and started making lists of what they were going to need for their new place.  the days flew by with lightning speed, and before we knew it moving day had arrived and they were going in to sign their lease and pick up their keys and remotes.

with the hub gone for a cigar convention in las vegas, and the bean heading off for her first camping trip with her new scout troop, they took pity on me and spent saturday night at home with me so i wouldn't be alone.  and we started moving some of their stuff into the apartment little by little.  it's a one-bedroom apartment with a little kitchen and a small dining room, plus a balcony and lots of closet space, and it's perfect for the two of them. 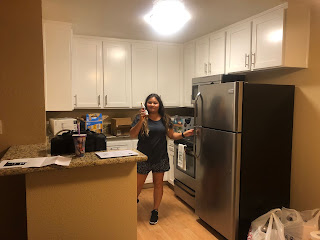 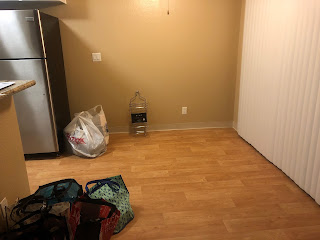 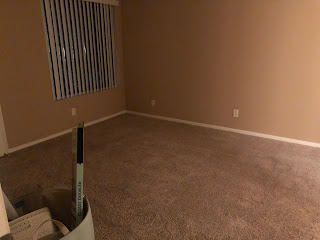 i somehow forgot to take a picture of the bedroom, but here's their bathroom. 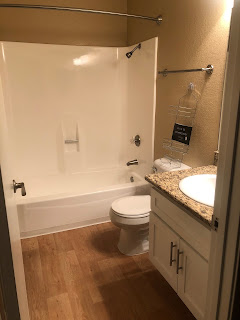 the next morning, we got up early and headed off to ikea to check out couches and dining sets for them.  when we arrived, the restaurant had just opened and so we decided to grab some breakfast.  i had no idea they even served breakfast, and then was super excited to see how cheap it was. 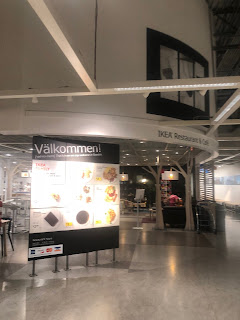 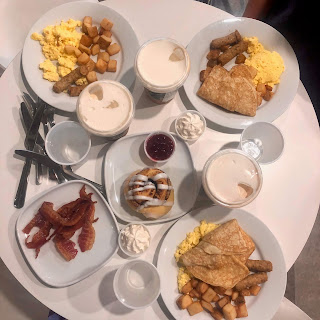 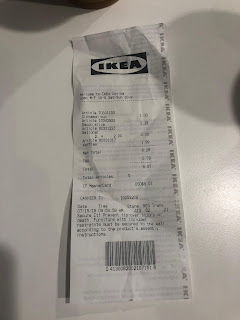 after we picked up the bean from her overnight trip, we took her back to the apartment so she could see it and we could help them get started on unpacking.  while i got started on lining their kitchen drawers we put the bean to work on assembling their new stand fan.  it was comical. 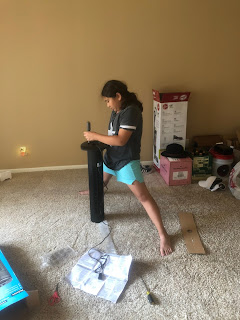 especially when she realized that she'd done it backwards and had to have help to get it right. 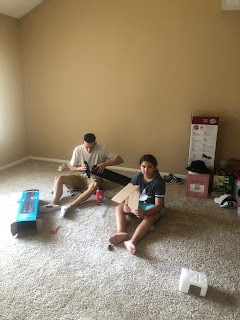 the old lady put the new vacuum together and gave it a test drive. 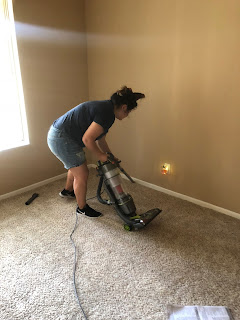 and then she got to work on assembling their little wine rack - priorities, right? 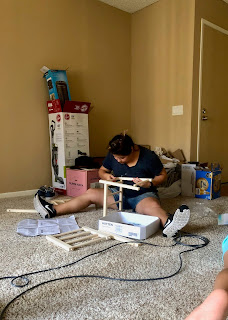 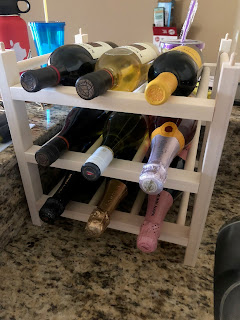 i went in and put up their shower curtain, which i'd thought was really funny until i stopped to think about who it was for.  barf barf barf.  haha! 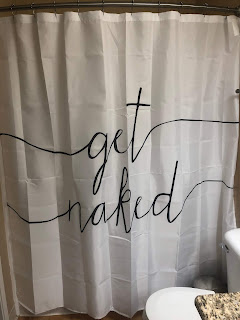 he was not so amused when she slapped her favorite refrigerator magnet on. 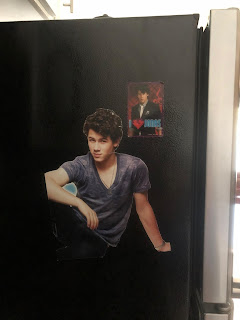 they came back to the house to pick up some more stuff later on, and this is what i put on my new letter board: 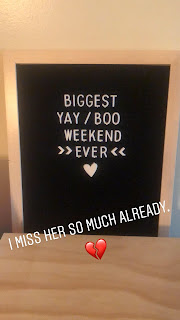 i handed them a couple of gift cards to in-n-out so they could grab some food, and i told them to go get it and take it home and enjoy their first dinner together in their new home.  it was a bittersweet moment, and i pulled her in for a really big hug before they left.  i was feeling really emotional and took this (if you were following my instagram stories yesterday you got to see how dramatic i was being):


and when i tell you that on top of only being 1.5 miles away, she was coming back in the morning so we could go to our monday orangetheory class together, i totally understand if you roll your eyes and write me off as completely ridiculous.  because i know i really am being ridiculous, and yet i can't help it.  yes, she's right down the street and she'll still come over all the time.  i'll still get to see her a lot, between our workouts and disneyland trips and family dinners and stuff like that.  and yet it's just never going to be the same again.  she won't be in her room anymore, we won't be able to raid each other's closets or borrow beauty products at the drop of a hat, or fall asleep on the couch in front of the tv.

i promise that i'm really excited for her, for this new chapter, for gaining some independence and learning how to be in her own space.  she's going to learn so much and figure things out for herself, and it's going to be a great experience for them both.  and yet...my heart just hurts.  she's my baby.  she's always going to be my baby, and i'm just going to have to learn how to let go.

poor bean.  she's entering those critical, awkward, difficult tween years and her mom's going to give her 100% now that she's the last one in the house.  MUAHAHAHAHAHAHAHA.
at July 16, 2018

Email ThisBlogThis!Share to TwitterShare to FacebookShare to Pinterest
Labels: letting go, the old lady is a grown-up