no fireworks for us this year

our one full day at sea landed on the 4th of july.  i was a little bummed because this meant it would be the first time we didn't have fireworks to watch that evening, but then again we were on vacation so i really wasn't complaining.

especially when i was getting to start off the day with not just one, but two spa treatments.  i'd never been to a spa on a cruise ship before, so i was extra excited for it.  the ladies at the spa table on the first day of the trip had sold me on a ionithermie session, which was supposed to get me a guaranteed loss of anywhere from 1 to 8 inches of chub from wherever on my body i asked them to target.  i wasn't super clear on what exactly it involved, but it sounded interesting and let's face it...i like food too much to really do the clean eating it requires to lose belly fat the regular way.  heh.

after i checked in and filled out the paperwork, i was escorted into the therapist's room where she explained what was going to happen during the session.  she asked me a bunch of questions about my usual fitness routine and my diet (that was fun...not), and then she left the room so i could get changed into some super sexy mesh disposable panties and a robe.  we took some "before" measurements and then we got started on the treatment.

she sprayed some tea tree oil onto a body brush and went to work on my lower half to exfoliate all of the dead skin and get the blood circulating in there.  then she used a toner to get all the pores open and ready for the red algae serum that was smoothed on next. 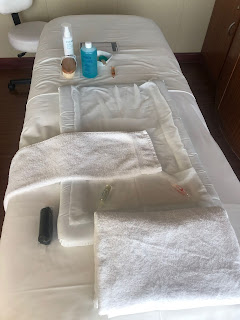 after that, she prepared the seaweed wrap that would go on next.  she placed some of these sensor things underneath it so that it would be perfectly positioned on my back when i laid down on the bed: 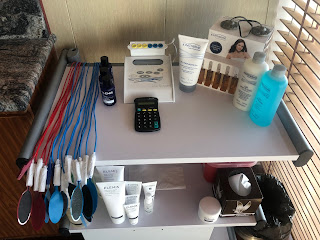 when i was comfy on the bed, she covered my lower half in the rest of the seaweed wrap and placed the sensors on both sides of my belly.  after covering me all up with a warm towel and blanket, it was time to turn on the machine that would simulate a workout and make my muscles contract.  it was a little weird at first, on the lowest setting, and felt a little like ants crawling on my skin - but not in a creepy way, that's just the only way i could think of to explain it.  as she turned up the intensity it got a little uncomfortable for a bit, but it wasn't terrible.  and when she got up to about 80% the contractions were pretty strong and i had to catch my breath a little in between.  it was all very weird, but after a minute i felt strangely relaxed by the sensation of the contractions.  it was pretty much the most bizarre massage-type thing i'd ever experienced, and i was a little disappointed when it was time to turn the machine off.

after she removed all of the sensors and cleaned the seaweed goo off of my skin, it was time for the "after" measurements.  as i looked in the mirror i shit you not, i could actually see some of those fun vertical lines you get on your abs when you do a really hard core workout on a regular basis.  she busted out that measuring tape and measured the same spots she'd done before the session started, and wouldn't you know it - the overall difference was 5 inches.  not too bad, i'd say.

you can continue the treatment at home, using the products in the same order she'd done on me just before a workout (which would take the place of the contractions the machine had created).  i kind of really wanted to buy the kit, but considering the $300 price tag i knew the hub would likely blow his top and i decided to check it out online when i got home (i found it on amazon for basically the same price, so i guess it wasn't inflated cruise ship spa pricing).

i was booked for a 50-minute swedish massage after that, which was lovely and relaxing until she tried to sell me products for lightening facial age spots.  thanks for reminding me that i'm getting old, lady.  i know it's your job and you probably make a nice kickback when you sell product, but UGH.

the hub was enjoying a nice morning of sleeping in, and when i got back to the cabin he was ready to head out and grab some lunch.  we hadn't been to the dining rooms yet at this point, so we decided to head down and give it a shot. 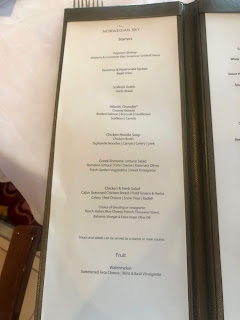 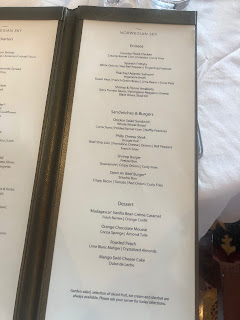 i must've been really hungry, because i don't have any food photos.  it wasn't anything particularly interesting anyway - we had hummus and salad for our starters, and i did the shrimp burger while he ordered the philly sandwich.  nothing special.

when we got back to the cabin we decided to hang out on the balcony and enjoy the ocean breeze a little. 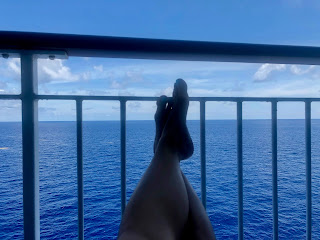 and then we heard chimes on the loudspeaker inside the room, which meant that it wasn't just an announcement from the cruise director about when the next bingo game would take place.  no, this was straight from the deck where the captain was informing us that we were changing course slightly to allow a helicopter to land and pick up a passenger who was ill and needed to get back to shore.  he cleared the top two decks, which meant that the hordes of folks in the pools and spas had to get out, and later we saw the helicopter as it circled around the ship in search of the best place to land. 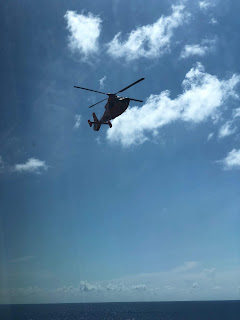 a little while later we saw it leave again, presumably with the sick passenger on board.  we never did find out what happened, so i hope they were okay. 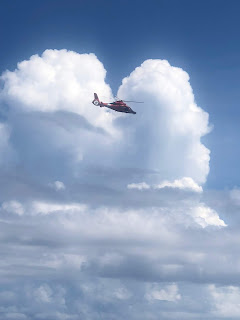 we decided to forego the dining room again in favor of the sushi restaurant located in one of the bars just outside of the smoking area that the hub had been having his cigar in.  it was one of several "a la carte" restaurants onboard, which means that it's not included in the cruise fare and is an extra cost.  but the prices were super cheap - like $6 for sushi rolls - so i figured it was just an upcharge to what we'd already paid for with our cruise fare.  it was pretty decent, and we enjoyed the casual meal without a ton of people around us. 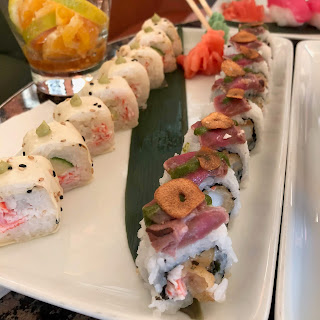 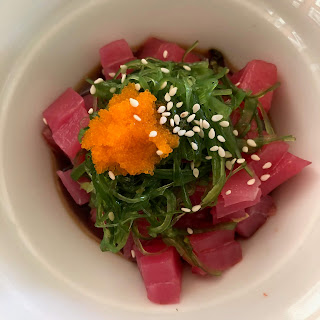 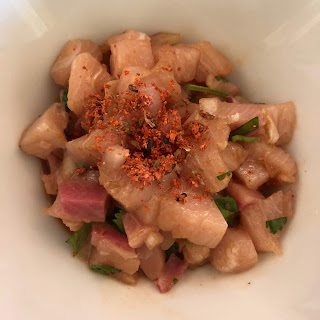 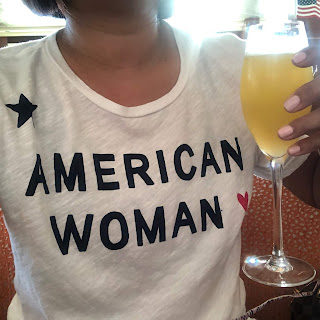 we cruised through the buffet in search of some dessert and came across this ice sculpture that had started out as the statue of liberty, in honor of the holiday. 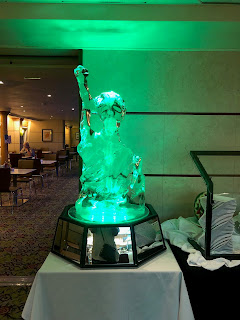 and then in our cabin we found another towel animal friend, along with the daily newsletter that gave us the details for what to expect the next day. 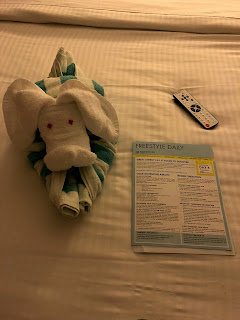 Email ThisBlogThis!Share to TwitterShare to FacebookShare to Pinterest
Labels: cruisin', wan is a spa whore