party in the city where the heat is on

with the bean safely in texas for the long-awaited grandma camp, the hub and i packed our own bags, hugged the old lady and mollydog goodbye, and headed off to lax bright and early the very next day. 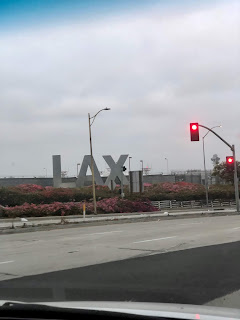 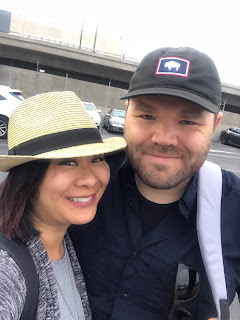 our destination?  miami for one night, and then boarding a norwegian cruise ship the following day.  we were excited not only for the fun adventure ahead of us, but for the ultra rare opportunity to travel together, just the two of us.  we hadn't done anything like this in years, and while we adore our family vacations it was really nice to have some time alone for a change.

airport security is always a good time.  not.  i hate having to take my shoes off and remembering to pack all of my fluids (3.4 ounce containers or less!) into a quart-sized ziploc bag.  the hub completely forgot all about taking his iPad out of his backpack and ended up delayed as they had him take it out and then go back through the security process again. 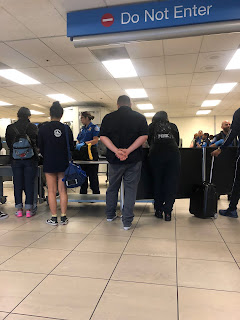 i really wanted coffee, but i also wanted to be able to sleep on the plane.  and i didn't want to have to get up to go to the bathroom while in flight, especially since i was in the middle seat and the person in the aisle seat decided to put his headphones on and pass out for the entire 4-plus hour flight.  oh well. either way, we were on the plane and on our way to spending almost a whole week together. 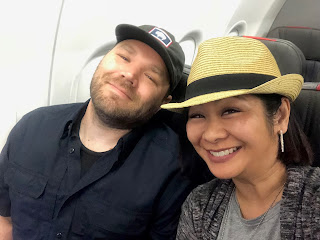 perusing the list of available movies was fun, too.  there were a few that i'd already seen that i would totally have watched again, and more than a couple that i'd missed in the theater that i really wanted to see, like these: 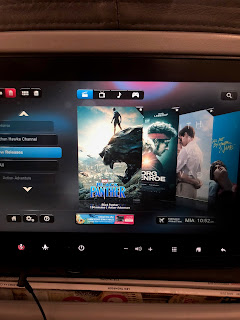 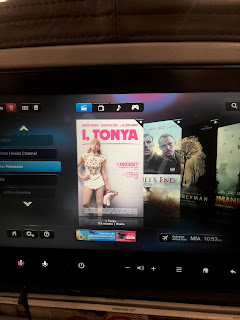 black panther ended up being my pick, and i was excited to finally see this movie that so many people have raved about.  in fact, i don't remember hearing a single negative review on it, and after watching it i totally got it.  it was a great movie, and when it was over i ended up passing out cold for most of the rest of the flight.

miami welcomed us with this as we walked through the terminal: 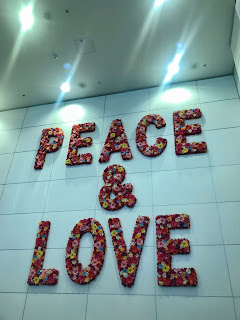 and while it took quite a while to catch an uber to get to our hotel, we were pretty happy when we finally pulled up.  this is the confidante miami beach: 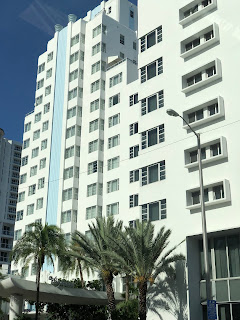 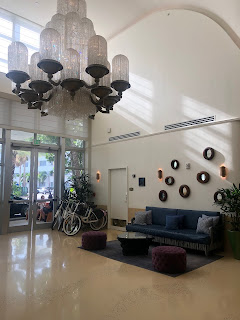 the hub decided to splurge for our one miami night and upgraded us to an oceanfront room with a balcony.  it was really nice! 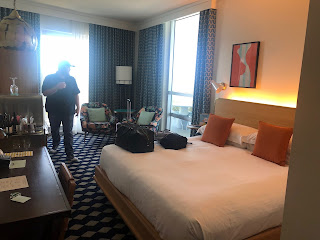 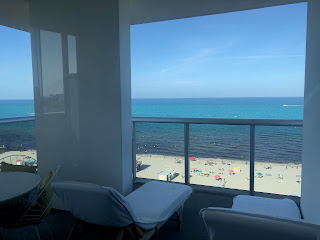 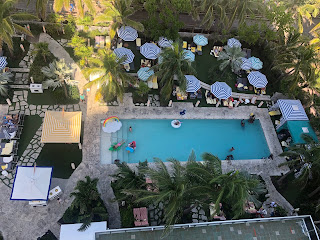 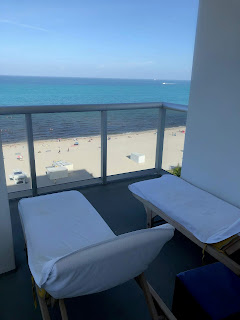 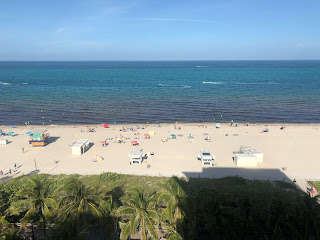 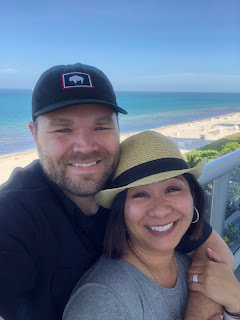 we decided to catch another uber that would take us to south beach so we could do a little walking and grab some food.  since we hadn't really eaten anything of substance all day and were adjusting to a 3-hour time difference, we were starving.  we ended up at havana 1957, where we sat at the bar and ordered a couple of drinks, plus some appetizers and a cuban sandwich to share. 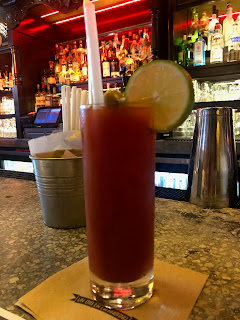 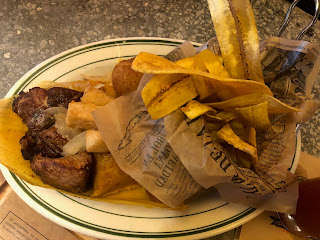 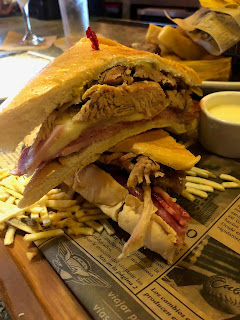 after we'd stuffed ourselves with all that delicious cuban grub, we headed out to walk along the beach.  there were lots of people hanging out, enjoying the beach, having picnics. 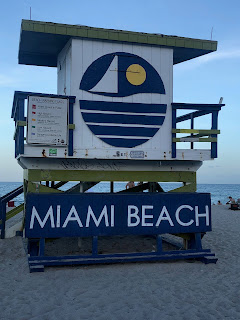 and all of the lifeguard stations were decorated in different themes.  with the 4th of july just a few days away, i picked this one to pose in front of: 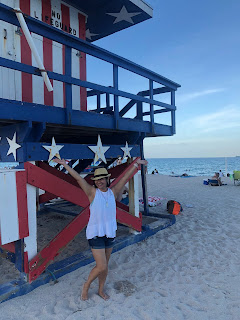 we walked along the shoreline for awhile and eventually made our way to a cigar lounge that the hub wanted to check out. 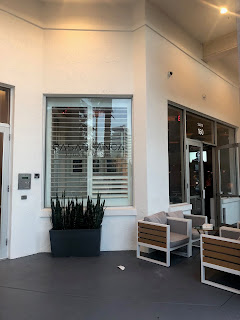 and when we walked in, the hub found himself in a bear hug with one of his old regulars from his own lounge.  so random.  they'd moved to miami about a year ago, and were super excited to see the hub and catch up a little. 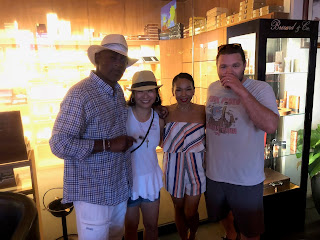 from there, we decided to walk across the street to joe's stone crab.  this is the hub's favorite dinner spot whenever he's in vegas, but he was excited to step into the original one here in miami beach. 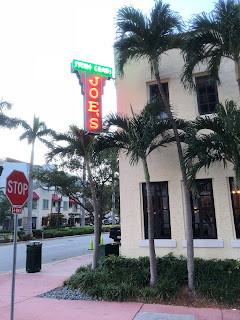 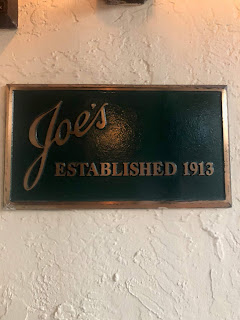 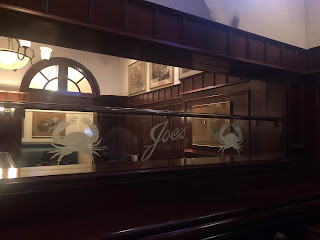 here too, we took a spot at the bar and grabbed a drink and a few crab claws to share. 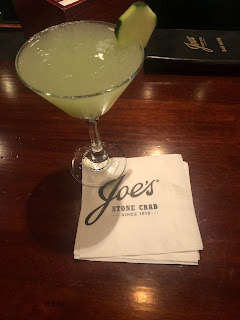 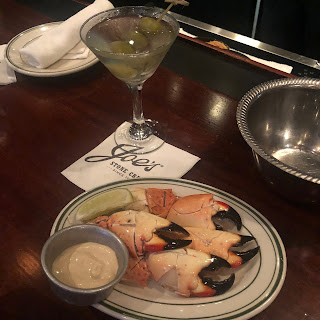 back at the hotel, we went out onto the balcony and watched and listened to the shenanigans happening below us at the pool.  there was a party going on down there, with lots of laughter and shouting and thumping music, and with a nice ocean breeze coming through i fell asleep out on one of the lounge chairs while the hub had a cigar.

not a whole lot of time in miami for us this trip, but i think we made the most of it.  maybe we'll come back next year to spend some time at the beach and then make our way up to - well, i'm sure you can guess.  you know it was killing me to be in florida and not set foot on disney property.  heh.
at July 11, 2018