getting our midseason jamz on

so, back to comp day.  the bean had an appointment to have her coaches do her makeup for her late morning, and luckily it didn't take very long for her to be done.  i can never get the eyeshadow quite right on her, and so when they opened up appointments for makeup and hair i jumped on it. since we have one of those crazy teased cheerleader hairpieces, i figured i'd do her hair myself when it was closer to dropoff time.  the makeup is a smoky eye with winged liner: 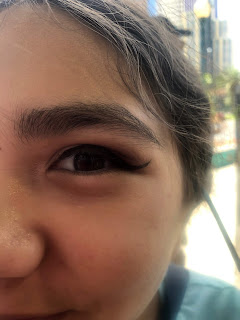 we had several hours with her before she had to be back in the coach's suite, fully dressed and ready to perform, and so that's when we hit the strip for those yard o'margaritas and the m&m store.  she loves that place (and secretly - or not so secretly, i suppose, so do i). 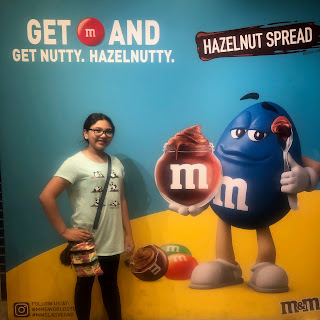 while her sister and her special friend sipped on their margaritas, she posed for me with this: 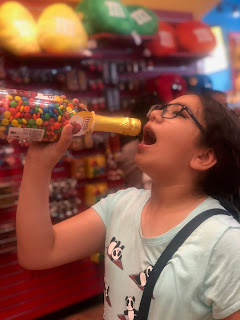 upstairs, there's a whole section of the store where you can create some personalized m&ms.  they were pushing these pretty hard with mother's day the next day, and as much as i would've loved to get some m&ms with my kids' faces on them i couldn't bring myself to shell out $25 for 'em. 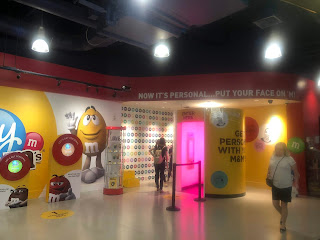 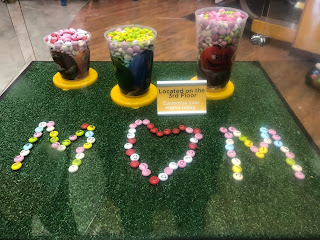 speaking of mother's day, the hub had taken care of ordering and sending a present to MIL while i decided to go the handmade route and put together a little care package for my mom that i mailed before we left.  her favorite color is purple, so i busted out half a dozen cookies: 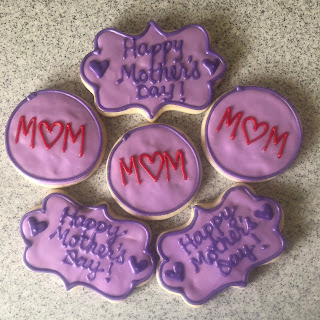 and then i used some super soft fabric in a fun rainbow print to make her a little top she can wear through spring and summer. 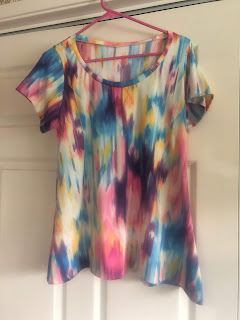 so back to vegas - after the m&m store we snagged a refill for the old lady's margarita and then headed on back to the orleans so that we wouldn't be pressed for time.  as predicted, the bean's hair was super easy to do, and she was dressed and ready with a few minutes to spare. 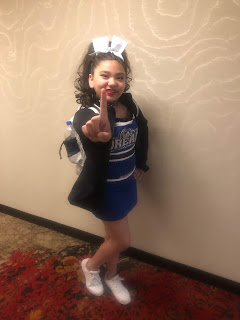 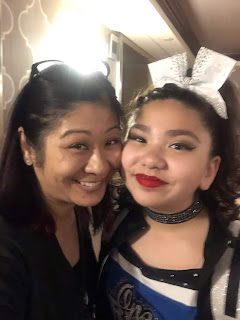 i dropped her off with her teammates in the coach's suite and then met up with the old lady and her special friend with the intention of going downstairs to do a little slot machine-ing.  but since they were leaving to meet up with her dad and then coming back later to watch the awards ceremony, i figured it was probably better to head over to the box office and buy our tickets for the competition.  as we walked towards the arena, we came upon a photo op and the old lady took my phone and said "you two, do a trick or something."  not knowing what else to do, this is what we ended up with: 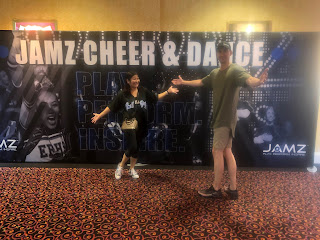 there were signs like this all down the hallway: 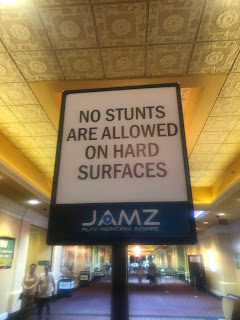 and when i stepped up to the desk to buy our tickets, i had some major sticker shock as we were charged a whopping $34.50 per person to get in the door.  holy cow.  i mean, they have us by the balls...that's what we're there for, so we're gonna pay whatever they charge, right?  but damn...i choked a little as i handed over payment for four tickets.  sheesh.

we'd timed it so that we arrived close to the time the girls were scheduled to hit the mats.  and as i looked around the arena, i noticed quite a difference between this competition and the last time we were in vegas for nationals.  this midseason competition is new, so it wasn't as crowded.  it was nice not to have to fight for seats, though, and then pretty soon it was time.

the girls nailed their routine and hit all of their stunts, and we were screaming and cheering and yelling encouragement from the floor.

i had my lucky shoes on - you know i wear these to every cheer competition. 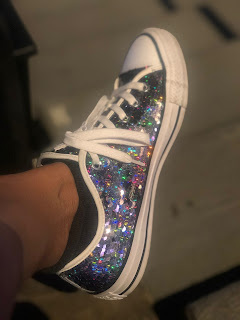 the awards ceremony started a couple of hours later, not too long after the last team performed. 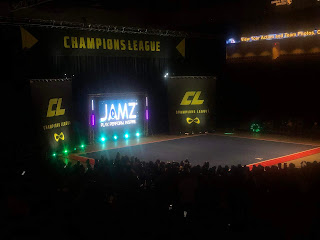 unfortunately, the team had received a 5-point deduction for some sort of illegal cradle...something about how they did a half turn when they were only supposed to do a quarter turn.  this hurt their overall score in a huge way, and i was sad to find that my lucky shoes failed me for the first time as the team didn't place in the top three this time around.  as she tends to be, the bean was pretty matter-of-fact about the loss and didn't seem too terribly disappointed.  the coaches gathered the girls together for a final pep talk, congratulating them on nailing their routine and telling them how proud they were of them.  and then everyone went their separate ways.

we headed upstairs so that the bean could change and wash her face and take down her hair, and then we grabbed an uber that took us to top golf.  we ordered a bunch of food, including this sushi platter at the bean's request: 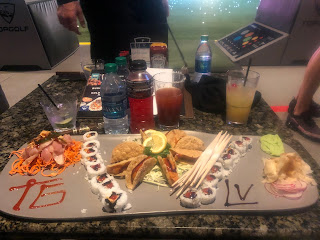 everyone had a great time hitting the golf balls, aiming for targets and trying to outscore each other.  the old lady beat us all, which was a fun surprise, and we had more fun than i'd thought we would. 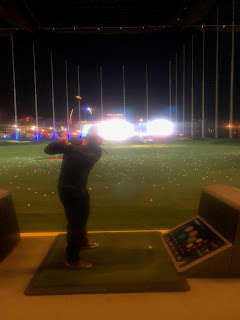 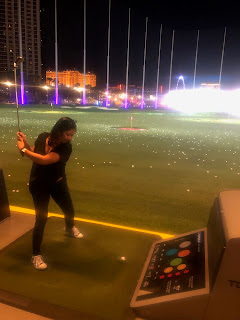 and then the excitement and flurry of activity of the day finally hit her and we turned around to see the bean passed out on the couch.  heh. 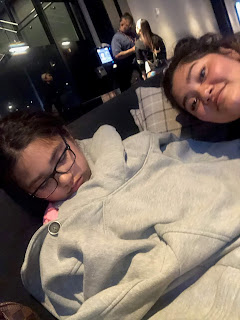 when we got back to the hotel, i was surprised that the hub was also feeling pretty tired and decided to go to bed when the bean and i did.  so much for one final wild night in vegas.
at May 17, 2019