taking away my superpower

so we all know how attached i am to my lash extensions.  it's like they literally give me life.  i love being able to wake up and walk out the door and not feel like an old hag even if i haven't had time to put anything on my face.  and they're just so pretty.  i love them so much.

but i've had them on for a whopping THREE years straight without taking a break.  and while my lash lady is really good about giving me a nudge when she thinks maybe it's time to give my lashes a breather, it seems that my natural ones hang in there really well even with the extensions on them for a long time.

and then after we lost molly and my crying was kind of out of control, i think i somehow managed to irritate my eyes in a big way.  i was feeling some discomfort and some other gross stuff that i won't bore you with, and so i decided that maybe it was time to take a break.  not to mention, i hadn't been able to rub my eyes in three years and sometimes that just feels really good to do.  heh.

i took a quick picture before i went in to have them removed.  i was super bummed to be losing my lashes, and this picture is pretty terrible with those weird baby hairs and my age spots on full display. oh well. 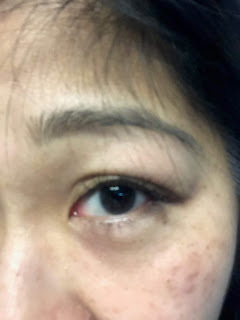 the removal was kind of relaxing, like when i go in for fills.  i just laid down on the table like always, closed my eyes and let her do her thing.  and then when she was all done she put some cool wet pads on them and told me i could go ahead and rub them to my heart's content.  OMG, i can't even tell you how wonderful it felt.  it was almost on massage level.

and the "after."  i know you probably think there isn't much of a difference here, but *i* can tell.  my natural lashes were a little stubby and stick straight out and they were so sad...but i have to say, i was pretty pleased with how healthy they seemed to be despite being a little puny looking. 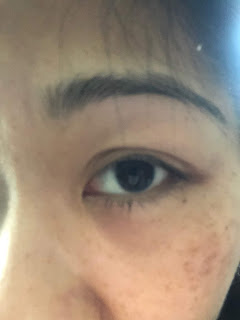 plus, i was a little excited at the prospect of trying out new mascaras and being able to wear eye makeup on the regular again without dreading cleaning it all off at the end of the day.  because, you see, when you have extensions you have to be really careful with what products you use (must always be oil free), and removing makeup is a long, slow process because you have to do it slowly so as not to screw up those lashes.  not to mention, i'd managed to totally fry them one time while i was baking something at a really high temperature.  i opened the oven and the heat and steam that came out of there damn near melted the things right off my face.  and now i don't have to look away every time i open that oven door.  come on...i'm looking for every possible positive aspect of taking my lashes off here.

i pulled out the stuff that the old lady recommended as being really good for regrowth and conditioning and gave it a try: 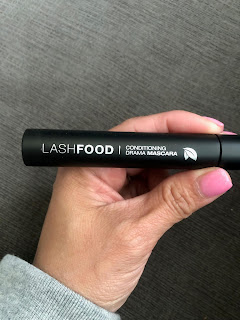 but i found that no mascara was going to help with how straight my natural lashes were.  and so i headed out to target and picked up an eyelash curler, much to the old lady's dismay.  she totally frowned upon my total vanity, telling me that curlers can be really damaging, and suggested that after a few weeks i go in for a lash lift.  apparently, that's the new lingo for "eyelash perm," which is something i'd done before.  in fact, that's how i found my lash lady in the first place.  and so i booked an appointment and then settled in for what seemed like a super long wait.

in the meantime, i ordered a tube of mascara that i'd bookmarked awhile ago in anticipation of this very occasion.  it promised that my lashes would look like extensions, and a quick video i watched on instagram seemed to fulfill that promise. 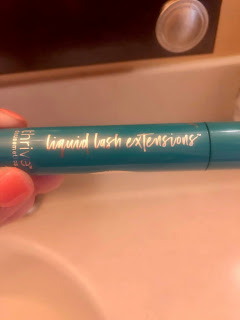 i was really excited to give it a shot, and even more stoked to find that it really did deliver.  i don't have any pictures to share, but trust me - the stuff is magical.  i actually felt like back to normal again, and i'm happy to report that it also doesn't flake off during the day and is still really easy to remove at night.  i'm totally going to stick to this stuff.

and then finally, i got to head on in for my lash lift.  my lash lady offered to throw in a tint (which looking back, probably isn't really necessary for me next time since my lashes are already pretty dark) and some stuff she called "lash botox."  it's supposed to strengthen and thicken, and of course i was all in.  the treatment is a whole relaxing experience, complete with this fantastic chair that massages you all the way down to the bottoms of your feet: 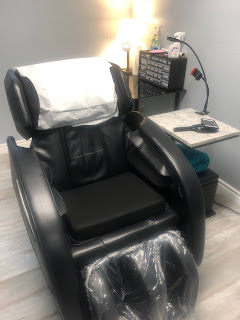 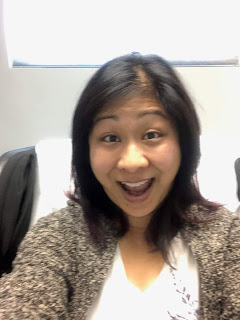 here's the quick "before" shot i took.  the old lady took some too, because they were going to use it as advertisement on the salon's social media. 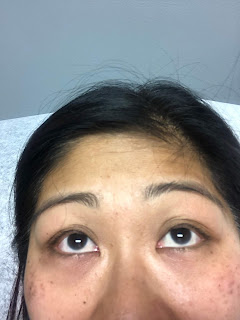 the first step was the lift.  i got to lay back the whole time, just relaxing and dozing off because what else are you gonna do with your eyes shut for an hour straight? 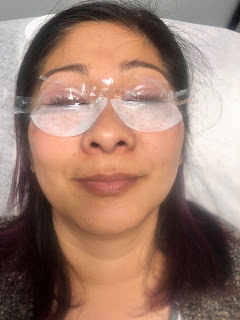 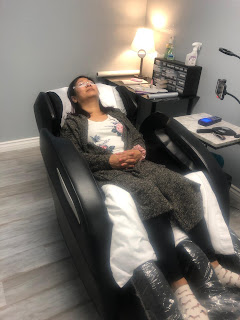 i'm not gonna lie...i was so relaxed that i don't actually remember the sequence of events that happened after that. i think she did the lift part and then cleaned off all the perm solution and then moved on to the tint before applying the botox.  and because there was a bit of the botox stuff left over, she brushed it onto my brows to give them some extra oomph as well.

when all was said and done, the whole shebang took about an hour and a half and the old lady put together this little "before and after" picture that she posted online.  i'm so glad you can't really tell it's me unless you know, because holy cow do i look terrible aside from how fantastic my lashes turned out: 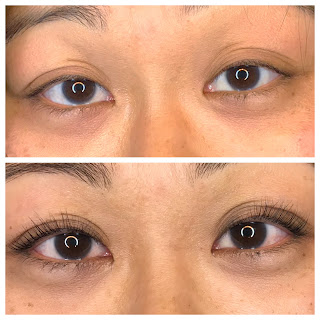 it's been about five days and i'm really loving this lash lift business.  the funny thing is that i put on mascara the other day and almost regretted it because i felt like they were damn near touching my eyelid when i was done.  but i do feel like i have pretty lashes again, and i fall into the old habits of being super careful when touching my eyes because i feel like i still have the extensions on.

all that to say, if you find that you don't want extensions for whatever reason but would love some sort of low-maintenance way of making your lashes look pretty, the lash lift/tint/botox is a really effective, affordable option.  it lasts anywhere from 4-8 weeks, and it all varies depending on each individual.  much like extensions, it lasts as long as it takes for your natural lashes to grow out.