when we got back to the hotel after that walk through chinatown, the girls and i hung out in the lobby while a couple of the parents headed upstairs to freshen up a little.  as usual, they had a blast doing absolutely nothing but being together. 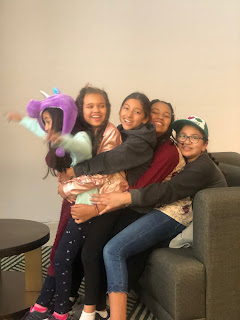 once everyone was back downstairs, we headed on out for a short walk over to pier 39 and some cheesy touristy sights.  it was fun to walk with these girls who'd been a part of my own troop for the last four years: 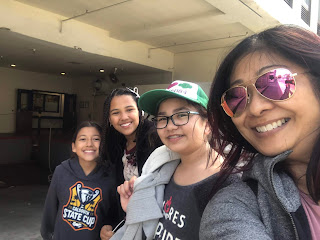 the bean actually had a very specific destination in mind - she'd been dying to head over to the "left-handed store" with her two BFFs forever.  strangely enough, all three of them are southpaws. 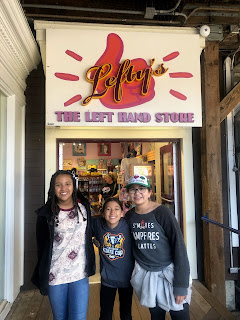 they had a ball going through the whole store, checking out all of the random things that were designed just for folks who are left-handed.  there were notebooks with the spiral on the opposite side, rulers where the numbers read from right to left, pens with special grips, scissors with the left blade on top.  they spent a good amount of time in there, emerging with a couple of things that would come in handy next school year.

we were all looking for something to snack on, and while we were all transfixed with the demonstration over at the fudge shop, we all ended up buying a treat at the funnel cake shop nearby.  it's never a bad time for some funnel cake fries. 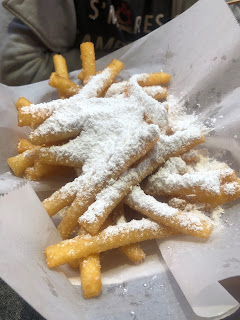 from there we made our way back down the pier and took a quick detour to say hello to the sea lions. 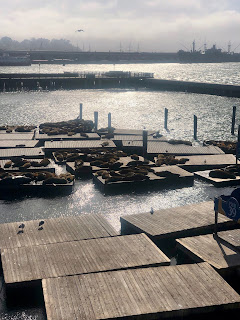 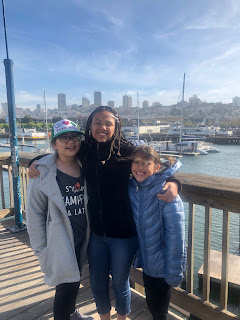 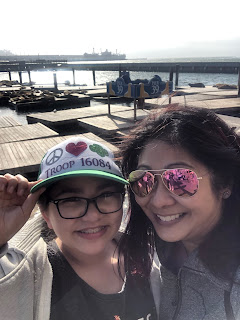 it was a wee bit breezy up there. 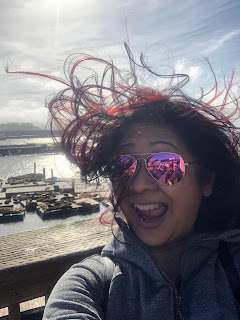 by then, it was time to head over towards the boudin sourdough factory to meet up with our troop for the self-guided tour and some dinner.  it was a short walk, and the others walked in the door a few minutes later. 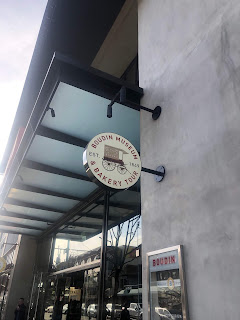 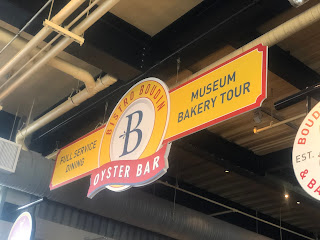 the girls were split into two groups, with half of us going upstairs for that tour and the other half staying down in the cafe to grab dinner.  the bean and i were in the tour group, and we headed upstairs to check it out. 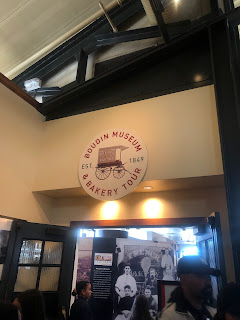 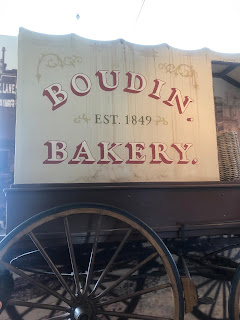 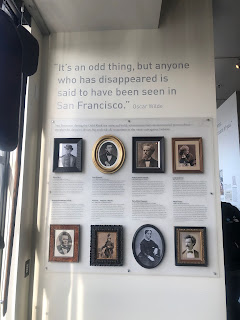 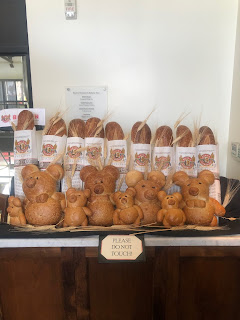 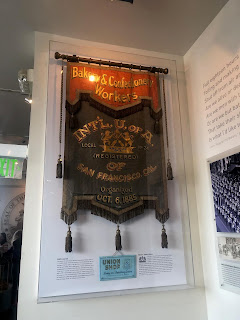 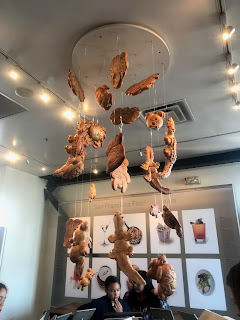 the bean and i were pretty familiar with the breadmaking process already thanks to the boudin exhibit at california adventure.  here, though, the samples were in a basket, self-serve style. 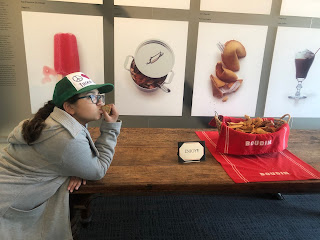 there was a fun list of food and drink items unique to san francisco: 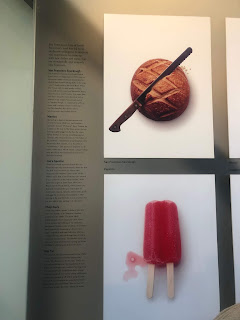 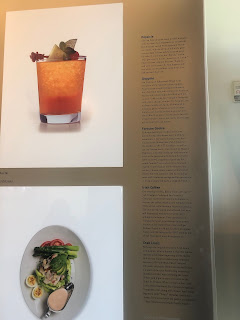 this was...weird.  i resisted the urge write "i like bread" and drop it in the slot, although the bean scrawled something on a slip of paper and giggled as she inserted it.  i don't even know what she wrote in there. 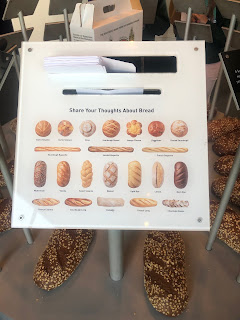 a little further and you could look down into the breadmaking area downstairs.  again, this was much like the display at california adventure. 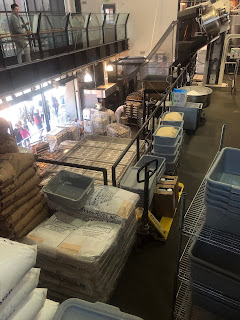 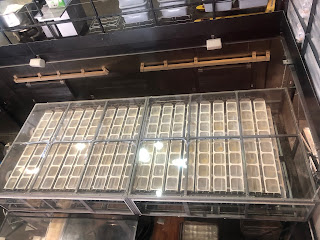 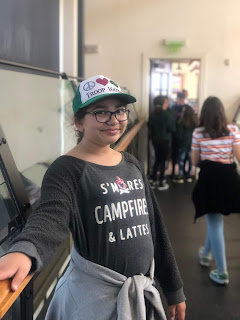 back downstairs, we got in line to place our orders at the cafe. 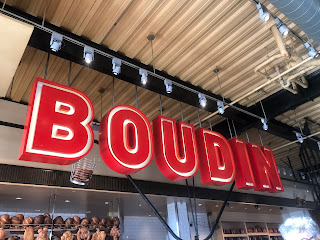 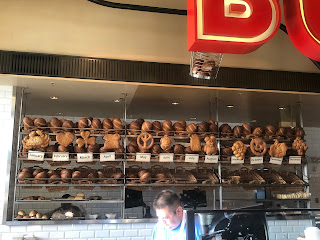 the bean opted for a basic grilled cheese sandwich that didn't photograph very well, while i went for the crab chowder served in a sourdough bread bowl.  it was really tasty. 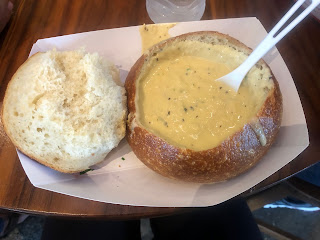 once everyone had had a turn to check out the tour and enjoy their meal, we gathered outside to start the short walk over to ghirardelli square for some ice cream.  the line was pretty long, but everyone got their orders in and then it was a mad dash to try and find enough tables and chairs for our large group.  with 5,000 girl scouts in town for the bridging event it was a little tricky, but we finally got it together.  funny enough, i don't have a single picture of the bean or her friends from this part of the trip.  at least i got one with my friends. 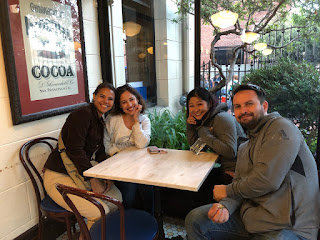 the bean had ordered a brownie sundae that she shared with her bestie, and this was my frozen hot chocolate.  it was delicious and reminded me a lot of the one at serendipity 3 in NYC (and vegas). 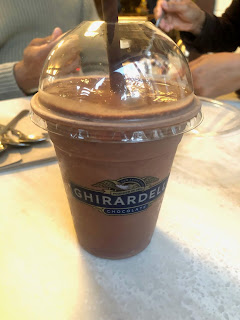 we all walked back to the hotel as a group, where everyone parted ways as soon as we entered the lobby.  the girls had an early start the next morning, and after all of the walking and excitement everyone was ready for bed.  i think i was asleep before 10, myself.  those 15,000 step days were kind of doing me in too.

Email ThisBlogThis!Share to TwitterShare to FacebookShare to Pinterest
Labels: friends make everything better, san francisco, the bean is a lefty