while the bean's girl scout troop has been meeting regularly since school started in august, they just had their annual investiture/rededication ceremony last week.  that's when they welcome new girls to the troop and hand out awards that have been earned.

i'm not sure if other girls who were in our now-defunct troop have moved on to new troops, but i'm pretty happy that the bean was able to stay with her two BFFs. 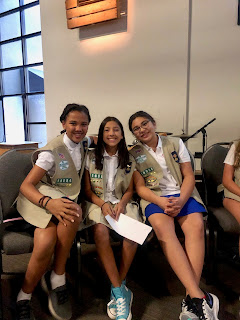 her new leaders are great, and i really like them.  they do a great job of keeping everything organized and always pull off wonderful gatherings like this one.  the girls all had assigned speaking parts during this ceremony, from the presentation of colors to the pledge of allegiance to reciting the girl scout law and promise.  i was particularly proud of the bean as she led the room in the girl scout law - which she memorized years ago and didn't need to turn around to look at the text that was displayed on the screen behind her. 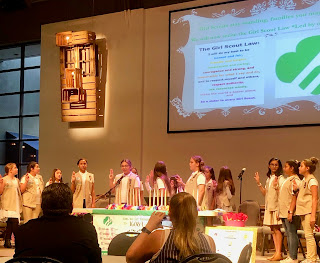 along with a good number of the other scouts, she was the proud recipient of the bronze award.  they'd worked on earning it over the last year, putting together and delivering care packages for cancer patients at the city of hope. 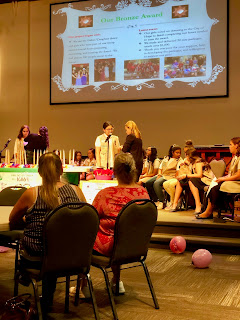 and she also received her 5-year pin, a nice addition to the membership pin on her vest that consisted of a little gold 5 attached with a chain.  hard to believe she's been a girl scout for that long. 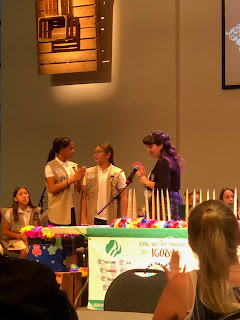 and then each of the girls was given a piece of the girl scout promise to read, along with a line about how she worked it into her everyday life.  she got the "respect authority" portion, which was pretty much the most perfect one for her considering the fact that she's always been a stickler for following the rules and listening to authority figures.  then they got to "light" a candle - but this year, instead of having open flames in the room they used LED candles that lit with a twist. 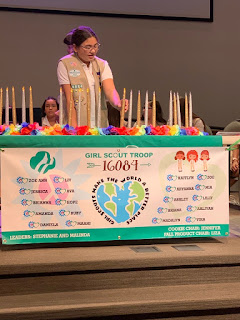 here she accepted her certificate with her bronze award and rededication patches.  that reminds me, i better make sure i sew those babies on before i lose them.  heh. 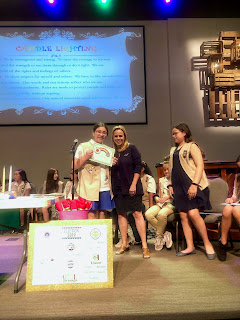 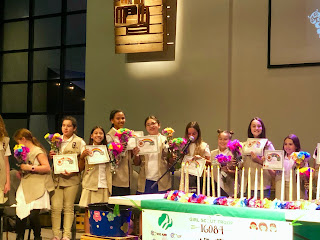 and then we had to skedaddle outta there because it was time to head out for cheer practice.  they couldn't have timed it better.  i even had enough time to snap one more picture with her besties before we left. 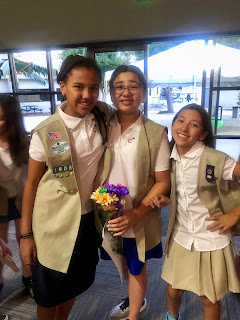 and now they can start brainstorming for ideas on their project to earn their silver award.  just one more step towards that all-important gold award, and hopefully learn something and give back to the community along the way.
at October 29, 2019