so the bean's actual birthday went by in quite a blur.  tuesdays are typically pretty busy for her anyway, and this one was no exception.

oh!  i should share this too:  so, there are only about 34 kids in her whole 6th grade class, split up into two separate homerooms.  while others choose to bring a birthday treat for just their class, she wanted to share it with everyone, and so she'd busted out three dozen cupcakes using my tried-and-true cake and frosting recipes after we got home from that disneyland extravaganza.  she did a fantastic job, with my only contributions being a little math to help her calculate measurements for half a batch of frosting and then piping it on the cupcakes for her.  because of a deal she'd made with another girl in the class who shares her birthday, she brought them in the day before. 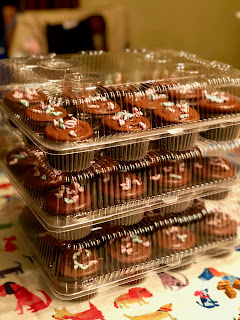 after she'd devoured those red velvet pancakes for breakfast, she got herself ready and headed off to school.  in her absence, i managed to go to target to pick up a few decorations and a couple of last-minute presents and then headed home to get everything wrapped and decorated. 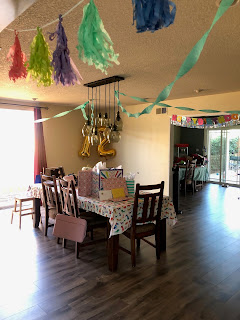 she usually heads to her math tutor right after school, but when she said she didn't have any math homework that day i decided to let her off the hook and headed straight home instead.  she was pretty excited to see the decorations and gifts that were waiting for her, and after she was done with the bit of homework she still needed to do she got herself ready for cheer practice and then we headed out to grab her a poke bowl for dinner.  i'm sure she would have loved to go out for sushi, and i felt bad that we couldn't do a proper family dinner on her actual birthday, but she seemed satisfied with what we were able to do instead. 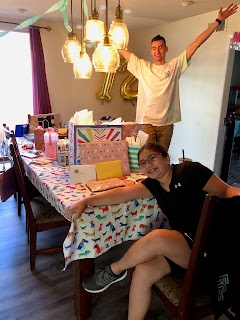 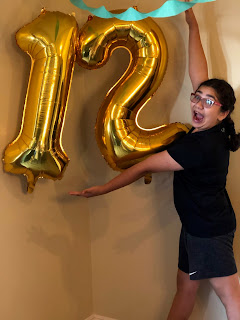 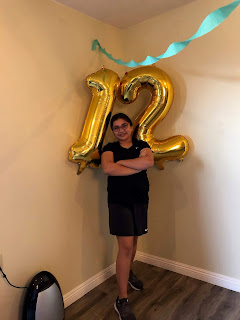 and then finally, it was time to open presents.  we kicked it off with some fun stuff from the old lady and her special friend - of course, almost everything she got this year was BTS/BT21-themed. 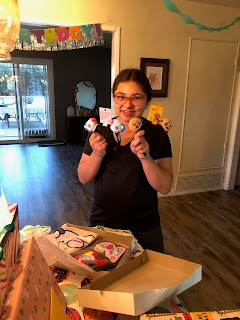 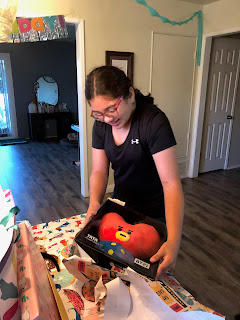 there were also some very nice cards, plus a pretty sweet e-gift from her lola. 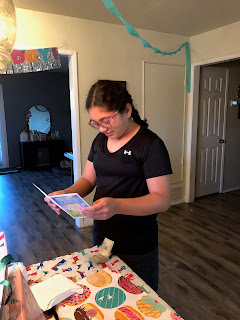 meanwhile, her daddy decided to try on one of her new sweatshirts.  heh. 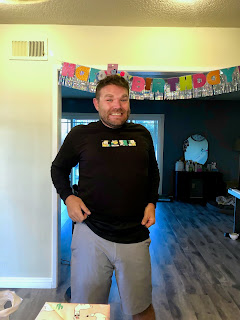 her big gift this year was something i don't think she saw coming.  we've gone back and forth about getting her a phone of her own, because while it'll be awesome for me it also opens her up to all sorts of other things.  i gotta say though, it's really nice to know that i can reach her as soon as the last bell of the day rings (since phones have to be turned to silent and left inside their lockers during the day).  there have been plenty of times when i'm running a few minutes late and just need to let her know, and this is going to make life a lot easier.  needless to say, she was pretty damn excited. 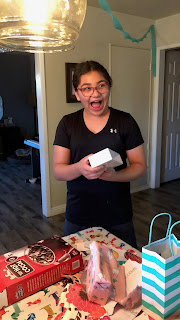 and of course, like we always did with her sister, we pranked her a little with several layers of gift wrap and then stuffed inside a wrapped cereal box that was also stuffed inside a bigger amazon box.  it's always more fun that way.

we tortured her with a few group photos before heading off to cheer practice, because that's also fun. 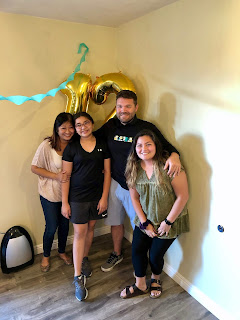 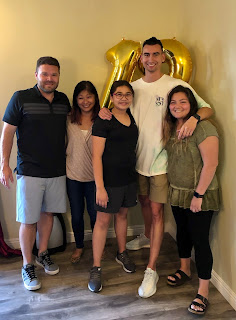 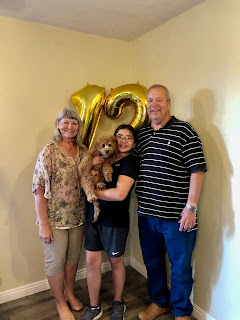 then when she got home, there was ice cream cake. 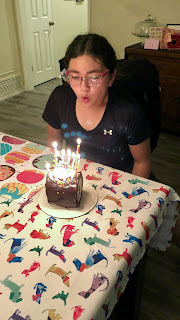 and that's a wrap on the bean's 12th birthday!  she was super stoked, and now we've got a year to figure out how to wrap our heads around the fact that she's going to be a teenager.  holy crap.
at October 07, 2019

Email ThisBlogThis!Share to TwitterShare to FacebookShare to Pinterest
Labels: bean is 12, bean is a baker, bean's birthday