my very own central perk

so the old lady and i dove into that friends lego set a couple of weeks ago.  she loves to put these things together, but she graciously let me do all of the building while she took charge of reading the instructions from the extensive booklet that came in the box.

the set came divided into six different bags, which also had a couple of smaller bags inside for a total of 1,070 pieces.  yikes.  i thought i'd taken a picture of everything that came in the box, but i must've been so excited to get started that i...didn't.  heh.

after opening the first bag and separating all of the pieces by color and style, we got started.  the first thing i got to assemble was the minifigure for gunther, the ever-present central perk employee. 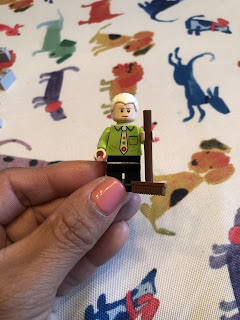 the pieces from that first bag came together to form the base.  once we'd put them all together, this is what we had: 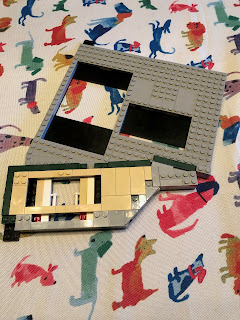 bag #2 was opened, separated and then assembled to look like this, plus the addition of the rachel minifigure, with her coffee tray in hand: 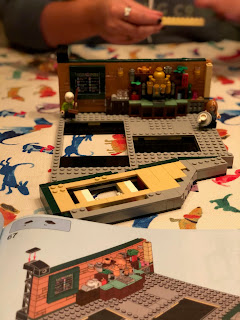 there were tons of little pieces in that bag, but it was really fun to watch the espresso machine and all of the accessories come together.  and we were finding that there were quite a few extra pieces left over from each of the bags once we were done.

this was after we were done with bag #3, the halfway mark.  there were lots of little details, as well as the joey minifigure.  he came with his "man's bag" and a box of pizza plus a couple of slices. 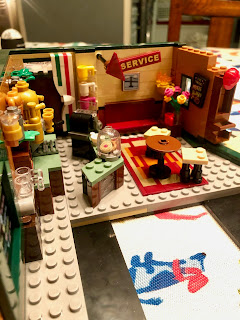 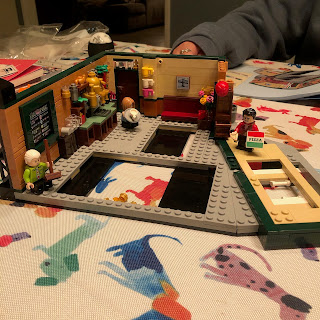 it was several days (maybe even a week?) before we had time to sit down together again and get some more work done on our mini central perk.  bag 4 brought us more of the exterior of the cafe, plus the window with the central perk logo.  ross and phoebe came to join the fun as well, with her guitar and his keyboard plus a couple of microphones. 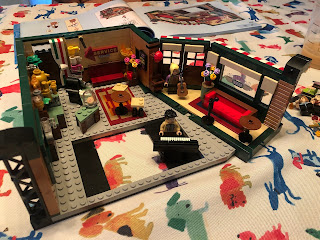 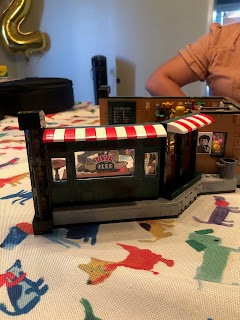 if you look closely at that exterior shot, you'll see a poster from joey's japanese commercial for "ichiban, lipstick for men."  so funny!

chandler and monica were the last to join us from bags 5 and 6.  the finished product is just so cute and super detailed, and looks just like the set from the show.  it was so much fun to put together, even though i don't know where i'm going to put it now that it's complete. 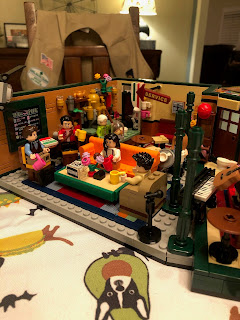 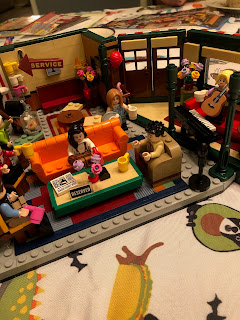 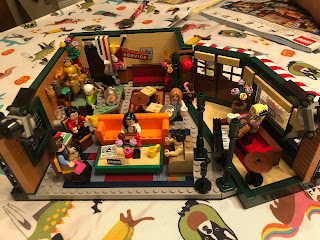 we're on the hunt for another fun set to put together, and this time i've promised the old lady that she'll get to do the building.  ha!
at October 17, 2019