striking out left and right

a couple of weeks ago after one of our grueling orangetheory sessions, the old lady alerted me that the lineup had just been released for KIIS-FM's annual "jingle ball."  the big announcement included the news that the bean's beloved BTS would be performing alongside other folks like katy perry, sam smith, halsey, camila cabello, billie eilish and a whole slew of other current pop stars.  and because the bean's BTS is very much like the old lady's jonas brothers, i knew i was going to have to take her.  she's never been interested in going to concerts before, but she's practically bruised her ass from kicking herself for not talking me into taking her to see them at the rose bowl this past may.

the old lady and i debated between surprising her with it and just telling her so that she could be excited about it, but of course ryan seacrest made the decision for us as he and the rest of his morning show crew chattered endlessly about it on the radio that morning on our way to school.  all the bean had to hear was "BTS" and she was immediately turning the volume up to hear whatever was being said about her boys.  she looked at me with big ol' puppydog eyes, and that was that.

tickets were being released in three different waves - the first, exclusively for capital one cardholders (which i am not).  next, KIIS-club VIP members (which i am).  and lastly, the rest would be released to the general public on a first-come, first-served basis.  ugh.  i hate the stress of trying to secure highly sought-after tickets.  but i always do it, because it always makes me happy to make my kids happy.  sucker.

on the day of the second wave of tickets, i sat down at the laptop and got myself all logged into my ticketmaster account.  when i went to the event page, there was already a queue set up for the virtual waiting room.  after entering the access code and then the 6-digit code that was texted to me for verification, i was officially in "line." 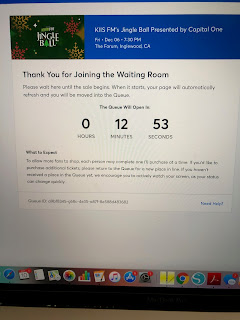 i started getting nervous as the ticker kept counting down, and then i was here: 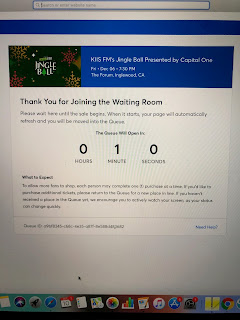 as soon as that last minute was up, the screen refreshed and i was in...sort of. 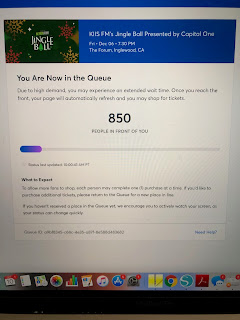 while that looked pretty bad, it actually moved fairly quickly. 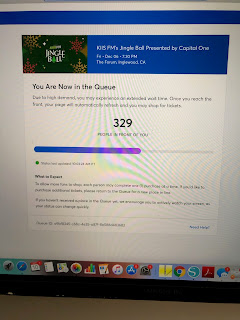 just a couple of minutes later, i was here: 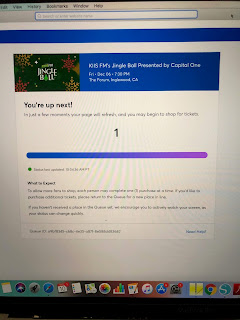 and then the screen refreshed again and i was able to view what seats were available.  except that all that was left were seats behind the stage.  like, with no view.  as in, when i clicked on the seats there was a disclaimer in all caps on the screen that emphasized the fact that there would be zero view of the stage, only of the big screen to watch the show on.  and who wants that?  i'm not paying good money to go to a concert where we can't even see what's going on.  for every other concert i've ever been to, those seats weren't even available because they were so lame.  the venue would just block off that section.  i guess KIIS decided they were going to put them up for sale to see if anyone would buy them, and i guess i shouldn't be surprised that they did.  not even an hour after the sale started, each and every ticket available for the presale was sold.  and so that meant i had one last shot at snagging seats for the bean's dream concert.

the next day, i got myself into position again just like the day before.  i logged in, entered the 6-digit code i received via text, and then i was in the waiting room again. 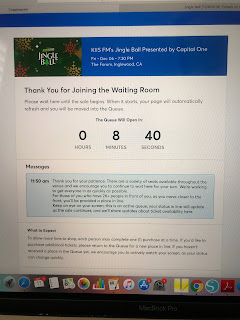 the time ticked away again and got to this: 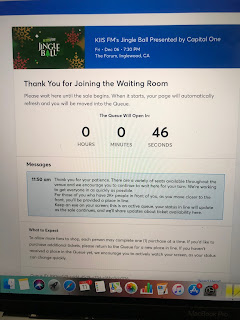 and this time, when the screen refreshed i had this.  holy CRAP. 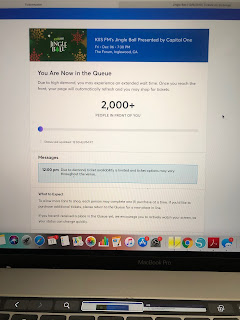 it took a pretty long time (okay, it was like 10 minutes but those were 10 LONG minutes) before the number finally moved. 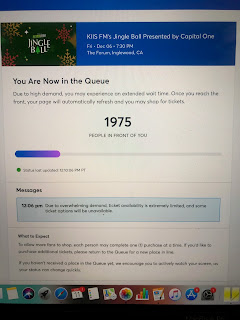 and then a few minutes later, the screen refreshed and i found myself staring at... 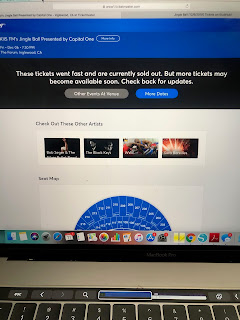 DAMMIT.  i was so sad, and even more bummed when i had to break the news to the bean that the show had completely sold out before i could snag tickets.  the hub and i had already talked about it earlier in the week and knew that we'd likely be turning to a ticket broker or stubhub or something like that, but i'd really hoped that i was going to be successful at securing some at face value.  blech.  the bean was actually home that day due to a teacher inservice day, and so as a consolation prize we hopped in the car and headed out to hollywood to hit up the line friends store.  the hub and i had gone exactly two weeks before to buy the bean's birthday presents, and had picked up a couple of phone cases that ended up not being the right size for the phone we gave her.  the  policy on the receipt said that returns or exchanges were only accepted within 14 days of purchase, and so we braved the traffic and headed out. 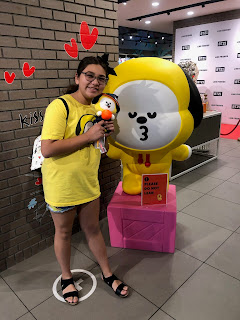 to soften the blow of not getting the dang tickets, i let her pick out a few things above the value of the items we were returning and then i got in line to check out while she continued to wander around the store.  i somehow managed to get an employee who had the hardest time understanding that it had been exactly 14 days since that last purchase.  he kept insisting that it was the 15th day, even though he was literally looking at a calendar and counting the days.  he refused to process my return, and i tried my hardest to keep my cool as i asked him to get a manager.  as he disappeared in search of someone to back him up, one of his fellow cashiers came over to see what was going on and said "no, you're totally fine, he can still exchange this for you."  and even the manager he brought with him looked at the receipt and told him that it was okay to process the transaction.  he was obviously irritated at having been put in his place and proceeded to grill me about the card that was used for the purchase (it was the hub's, of course).  instead of simply exchanging the stuff for the new items we'd picked out, he claimed that he had to credit the card used for the purchase and then asked me to verify the last 4 digits of the card.  when i asked him why, since he was going to credit the card anyway, he mumbled some garbage about "i just need to make sure it's your card."  at this point i should have asked for someone else to ring me up, but i was so annoyed and over it that i just wanted to get out of there, and so i rattled off the 4 digits and stood there glaring at him as he finally returned the cases and rang up the new items we were buying.  so. effing. frustrating.

after we finally left the store and headed back across the street, i came upon a couple of stars on the walk of fame that caught my eye: 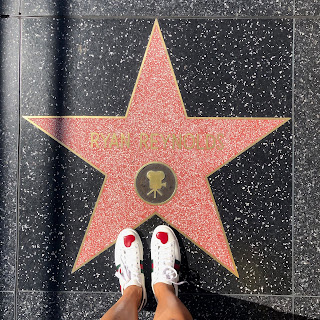 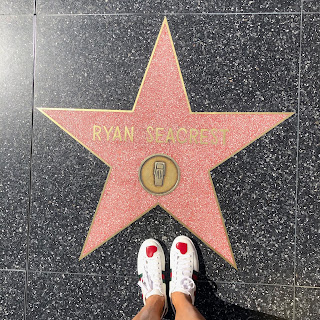 and then we went upstairs to the sanrio store to see if there was anything interesting in there. 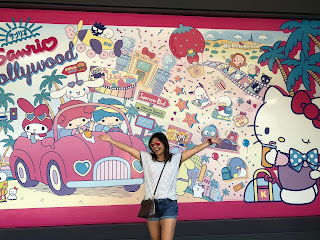 we left empty-handed, but not before the bean modeled this incredibly oversized, super extra hello kitty bow: 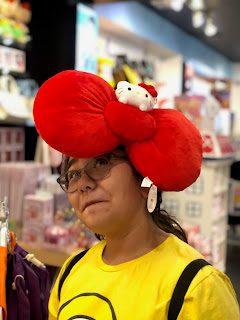 later, the old lady and her special friend met us at the house so we could hop back in the car and go to our favorite place. 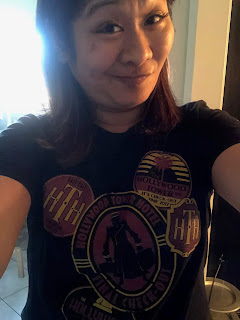 we headed down to grab some dinner and walk around, and in one of the shops we found a bunch of super fun retro gear: 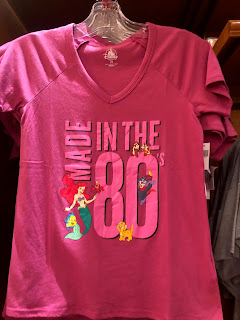 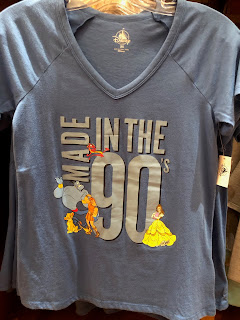 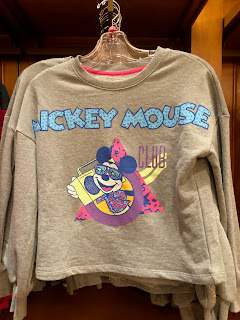 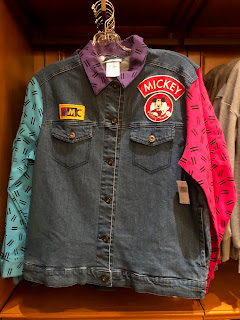 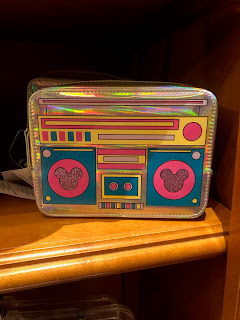 we got assed out once again as we found a spot to watch the fireworks only to hear the announcement that the "high winds" caused the cancellation of that night's pyrotechnics.  big bummer, since we almost never hang out for fireworks anymore.  and then we thought we'd go and grab some beignets and mint juleps to satisfy a weeks-long craving of mine, but the line was crazy long.

at that point we decided to just call it a night and finally had a stroke of luck as we had no trouble getting onto a tram and getting back to the car and out of the parking structure without a ton of traffic.  at least it was a positive way to end a day that was full of failures.  sheesh.
at October 18, 2019