so the hub was killing me with his non-committal responses to my poking and prodding about where we'd be going for my birthday weekend.  he'd pretend not to know what i was talking about, or change the subject, or just plain ignore.  drove me nuts.

and then we had an exchange over e-mail about the memorial service for GGM.  um, planned ON my birthday.  jigga-wha?  of course, we'd be in attendance.  but man...talk about totally smashing my hopes and dreams of going to sin city for the weekend.  i haven't been to the vegas since before the bean was born, and i've been dying to go for ages.  oh, well.

i was also lamenting my lack of wardrobe selections for - whatever was in store for me.  in the old days, the hub would be all like "just grab the essentials and we'll buy whatever you don't have."  but now that we're grownups and all, that doesn't really work anymore.  we's got responsibilities and shit, you know?  so i was pretty stoked when he said those magic words.  i threw my makeup and hair stuff together, a few acceptable items of clothing and shoes, got the bean down for her nap, and thanked MIL profusely for taking care of her for us as we left.

as we headed south, i debated in my head over our possible destination.  san diego seemed the obvious choice, but i also thought maybe disneyland could be it.  because the one thing at the top of my wish list this year was annual passes for us to visit the happiest place on earth as often as we wanted to.  the bean and the teen are both at great ages to go and have fun there, and it's really only about half an hour away.  although that idea went right out the window as we sailed past the exit and kept driving down.

of course, he teased me about taking me to tijuana for the weekend.  not that i haven't had my share of fun down in TJ, but it's not really my idea of a fabulous getaway.  and then we finally got off the freeway and headed to the gaslamp district.

with a good chunk of time to kill before dinner, we headed to the mall at horton plaza.  and there, wan's law was in full effect:  i had the green light to pick out whatever i wanted, and i found absolutely nothing that i loved enough to buy.  i tried on this outfit: 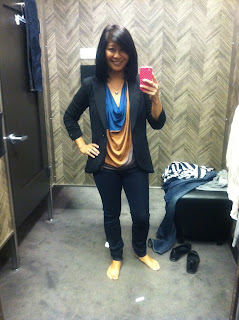 and both the hub and i rejected it.  i felt bad for the sales associate who'd scurried back and forth with things for me to try on, because after i finally decided that i didn't love this ensemble, i got dressed and we got the hell outta dodge before she could come back and talk me into it.

after perusing the selections at the other stores and still finding nothing cute enough for me, we gave up and got back in the car.  and i was super duper stoked when we pulled in here: 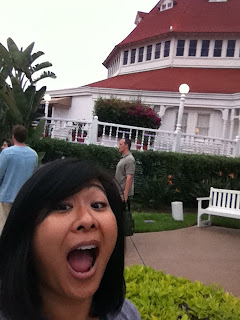 we haven't been down to the del in almost three years!  it's such a gorgeous hotel, and it always makes me think of an old movie i saw forever ago with my mom - "somewhere in time," with christopher reeve and jane seymour.  i love that movie.

i'm looking at the few pictures i took and realized that i didn't even get a single shot of our room or the view - but trust me, it was really pretty and we had a view of the ocean.  anyway, we relaxed for a bit and then decided to head back out and do a bit more shopping before dinner.

of all places, i ended up buying a top and sweater at forever 21.  damn.  but hey, i saved the hub a grip o'cash since i just wore the seven jeans and black flats i was already rocking.  and as usual, when we got to the restaurant - searsucker, owned by brian malarkey of "top chef" fame - all of the other chicks were dressed to the nines and i just looked...40.  eff.

but whatevs.  my husband thinks i'm hot no matter what i wear, and we had a great time peoplewatching and talking shit like we always do.  and i even got a drink - the "peter rabbit."  the waiter swore it was the best drink on the menu, but when the hub took a sip i thought he was going to upchuck right there on the table.  i had to admit, the basil taste was a little on the strong side. 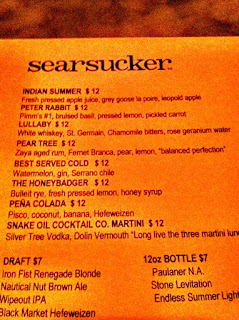 we both liked the restaurant, and i remarked that watching and listening to the kitchen in action was like an episode of "hell's kitchen." 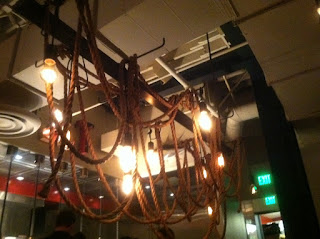 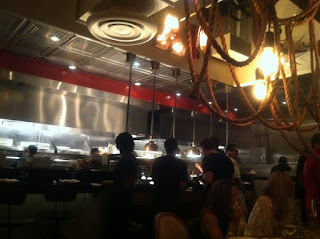 as for the rest of the menu, i ended up picking three different starters. 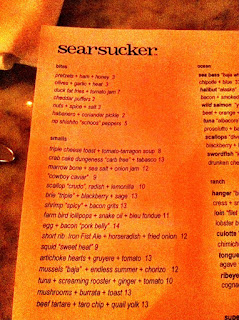 yelp had clued me in on the duck fat fries: 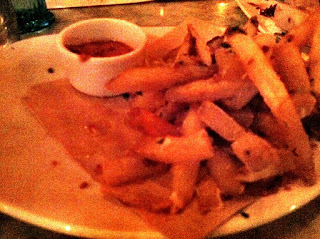 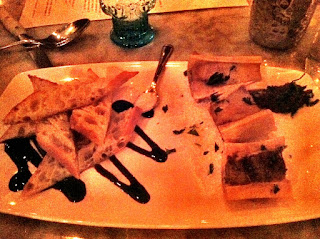 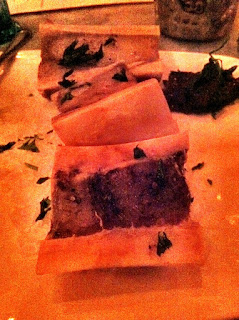 and the eggs & "bacon" (really a beautifully cooked chunk of pork belly).  even the hub, always a skeptic about things outside of his comfort zone, devoured this and loved it. 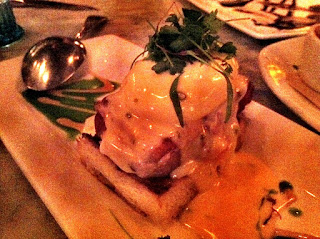 as for our main entrees, the hub played it safe with the filet, while i chose the butt - pork ass.  and of course, it was a running joke all through the meal, especially after the hub informed me that the waiter raised his eyebrows slightly because when i ordered it, i apparently said "i really want to eat the butt." 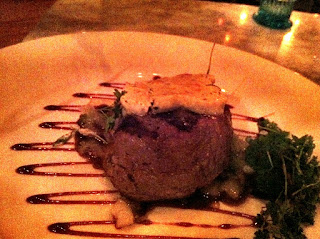 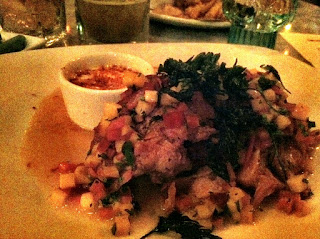 i'd eaten so many starters that i was stuffed, but that was best ass i've ever had.  heh.  and although it's very rare that i skip dessert, i just couldn't.  i would've exploded.  so i settled for the lollipop that came with the check instead. 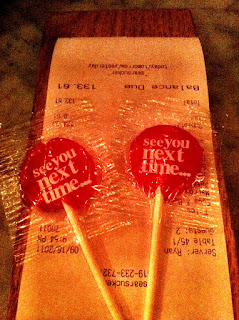 i'd read on twitter that one of my favorite guys from this season of "bachelor pad" was going to be at a club that wasn't too far away.  and since we'd grabbed a ride down to the gaslamp district from the hotel's car service, we hailed one of those pedicabs that lined the main drag.  i took a picture of searsucker as we whizzed by: 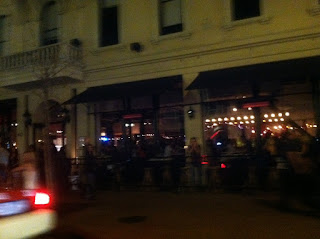 we got dropped off just down the street from the club, and the area got sketchier and sketchier as we walked along.  the hub wasn't a huge fan of continuing on, but it was early and would've been super duper lame if we'd gone back to the hotel right away.  oh, and which club was it?  it was called, um...boudoir.

um, and then it got kind of weird and awkward and uncomfortable, and we bailed.  didn't even stay long enough to find and meet the "bachelor pad" dude. we were outta there.

the next morning, after a super yummy brunch at the hotel, i headed to the spa and was treated to the most fantastical facial that ever was.  you know - the kind where you want to cry when it's over and lay there so long basking in the afterglow that the girl actually has to come back and make sure you're okay because you should've been dressed and out of the room ages ago.

back at home, i was really touched to find FIL waiting in the living room. apparently, brother wan had arranged for him to come home just for me - and it was so nice to see him.  we enjoyed a lovely BBQ at home that evening and it was nice to just relax and enjoy some family time (with the exception of the teen, who was at her dad's for the week).

i love being the birthday princess.
at September 21, 2011

hot, sweaty fun in the sun

the old lady, the fiancé and i kicked off our first full day in miami with a sweat session in the hotel's gym, nicely located at the top...