i love my friends so much.  and it seems that they might just love me too, because birthday princess weekend was kicked off with the most fantastic surprise party that ever was.

sweet lilcee is a sneaky, sneaky girl.  when she invited me to grab dinner, i never imagined that i'd be walking into a room full of some of my most favoritest people in the whole wide world.  little did i know that she'd coordinated with the hub weeks ago.  he'd given me the choice between a blowout party and a weekend getaway, and i chose the latter mostly because the bean's birthday party is coming up soon.  i didn't really think people would want to drive out to our house in BFE twice in the span of a month.

of course, i secretly wanted a party.  but at the same time, i feared that either no one would come, or there would be like three of us present.  that would be kind of sad.  and, believe it or not, i actually don't really love being the center of attention...for more than a minute or two.  like, being serenaded with the birthday song is mortifying for me.  as is opening presents in front of a crowd.  those scenarios seriously freak me the hell out.  i never know what to do with my face or who or what to look at, and i'm so awkward with it.

anyway, i arrived at lilcee's house with the bean's tinkerbell costume from last year's halloween getup.  nanette's mini-me decided that she wants to be a fairy this year, and when i asked her if she wanted me to mail the costume she told me that lilcee was putting something in the mail for her and i could just add it to that package since i was seeing her anyway.  as lilcee was scurrying around getting ready to walk out the door, she said "oh, i have something of nanette's too, i'm going to grab a bag to put everything all together."  well, sure, okay.

and then she said "do you mind if we make one stop before we go to the restaurant? i want to get some bread at the bakery."  i just figured that it was some kick ass bread, and since we were going to be in the area she wanted to scoop some up for breakfast or something.  no big.

although i thought it was a little odd that she put the bag of nanette's stuff in the car...and that's when i started to get a little suspicious.  but then i figured that since nanette and her family are leaving for portland next week, lilcee had probably invited her to come to dinner with us.  it'll be a long time before we get to hang out with nanette again, and we're going to miss her.

my suspicions were confirmed when we arrived at the bakery, where she disappeared for several long minutes and came back with a giant box.  and then when we arrived at the restaurant and she checked in at the hostess desk, we were directed upstairs, to "the big room."  heh.  and as we got to the top of the stairs and rounded the corner, i spotted a bright blue dress and the smiling face of our friend trish - who's in her last year of law school at harvard.  i walked in the door to find even more familiar faces and a chorus of "surprise!"

even though i'd been putting two and two together, i was indeed surprised.  and touched.  i was so shocked that i didn't even cry - ME, the biggest sap of 'em all.  i ran around and hugged everyone and marveled at the coordination it must've taken to get all of these ladies together, especially the ones who live in south OC.  on a thursday night!  i was feeling the love in a big way and was totally overwhelmed - much like the tangle of emotions way back when the SFAMily threw me that kick ass baby shower.

i scrambled to get a few shots on my phone before i found a spot at one of the tables and dug into the delicious grub. 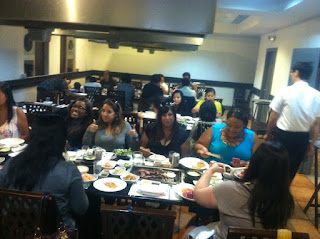 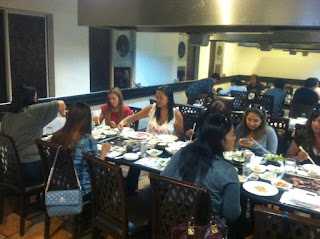 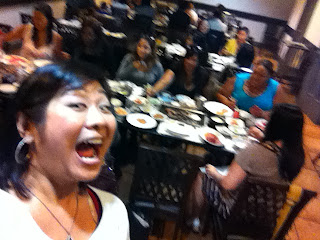 i was so amused to find that the group had chosen to take me to a korean bbq place - something they all know isn't the hub's favorite.  he's not really all about restaurants where you cook your own food, and so although the eats are delish, we never go.  i was totally excited and stuffed myself silly. 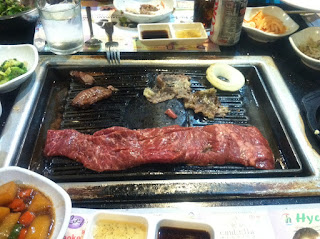 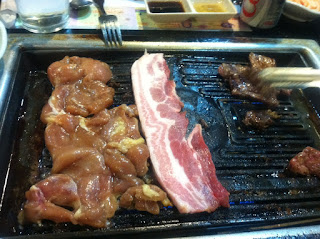 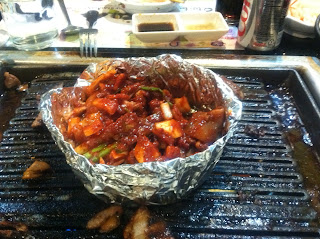 that last shot is octopus, which i declined.  i'm not a squid fan, and since i was told that this was similar, i figured it was best left to those who would truly enjoy it.

oh, and the giant box yielded a delicious mocha cake.  and yes, i endured the "happy birthday" song.  awkwardly, but happily. 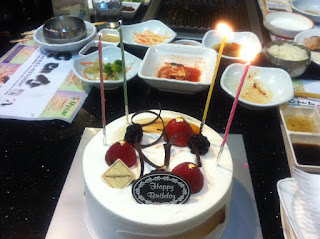 as dinner came to an end, we managed to snag a nearby diner to take a couple of group shots for us. 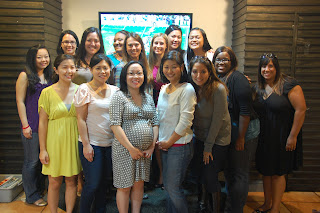 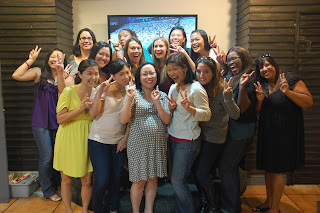 and those of us who didn't have to drive all the way down to mexico moved the party to a nearby karaoke joint. 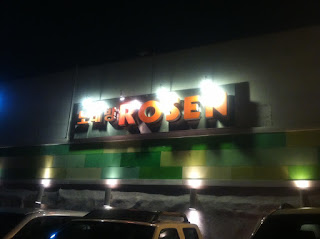 we giggled at the microphone covers.  practice safe sangin', y'all. 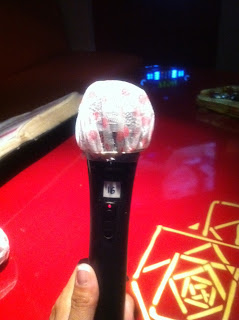 i was still getting over that cold i'd managed to saddle myself with the week before.  although i can usually hit higher notes than i did, getting sick doesn't affect me in a good way, a la phoebe buffay from friends.  no sexy voice for me - instead, i subjected my friends to my horrible (but enthusiastic) croaking.  sorry, you guys.

it was such a fantastic evening, and i loved every minute of it.  i'm so blessed to have such awesome friends.  i don't know what i would do without them.
at September 20, 2011