a couple of years ago, i had the chance to review a cookbook that offered recipes that clone signature dishes of chain restaurants from coast to coast.  i've actually made a handful of recipes out of it since that first try, too.  there's all sorts of good stuff in there from appetizers to dessert.

so when i got an e-mail from the publisher that offered me the chance to review a new version of the book, i jumped right on it.  and i was excited to receive my copy just two days later. 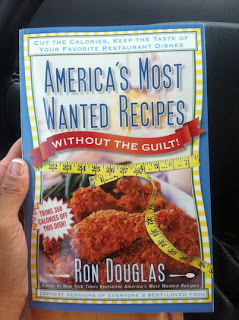 i thumbed through it, made mental notes of things that caught my eye, set it aside, and promptly forgot about it for about two weeks.  heh.

and then i got hit with a craving for some fried chicken.  i love homemade fried chicken, but it's such a mess and a pain in the ass to make.  but then i remembered seeing a recipe for KFC in this book, and it was baked - so it'd not only be easier, but healthier too.  bonus!

i gathered all the spices that the recipe called for: 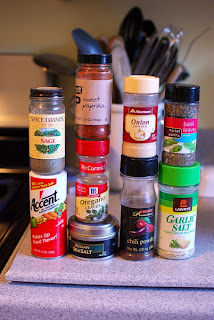 yeah, there's only 9 there.  the colonel's recipe has a magical 13, but there were only 11 listed in this one.  i didn't have any marjoram and didn't bother to take a picture of my pepper shaker.  i threw everything together and marveled at the sheer volume of spices in my bowl. 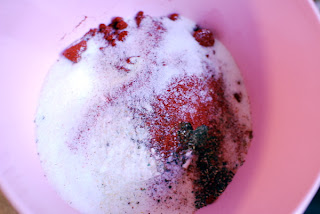 after soaking my chicken in an egg & buttermilk mixture and then rolling it in the spice mixture, i sprayed it with a little pam and baked it for about half an hour or so. 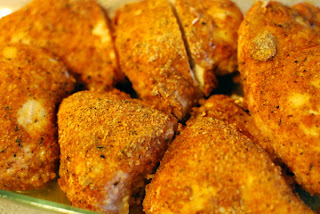 while it wasn't exactly like the original, it had a great flavor and was super moist (yes, i do despise that word, except when it's being used to describe food).  i saved the leftover spices, too, because i'm thrifty like that.  i even remembered to label the ziploc i stored it in, so i wouldn't forget what was in it.  i have a handful of mystery baggies in the cupboard that i can't seem to remember what they're for.  you'd think i'd just toss 'em and get it over with, but i hate the idea of wasting stuff.  although i suppose they're going to waste just sitting there, unloved and unused.  hmmm.

in any case, i'll be referring back to this cookbook for more yummy stuff - i've bookmarked a recipe for potato soup and reese's peanut butter cake.  there's a significant difference in calories vs. the first version of the book, so the hub will be happy that i'm trying to keep us healthy.