a weird start, but ended with a bang

i kicked off my actual birthday with a training run.  after all, i was a little behind from being sick, and i figured it wouldn't hurt to play a little catch-up, even on my special pretty pretty princess day.  and right as i grabbed my towel after my shower, i heard the doorbell, followed closely by the sound of my mom's voice.

i rushed through getting dressed and putting my face on and then headed out to receive a big smile and a birthday hug from my mama.  well, and something else, too - she'd tweeted me last week to say that she'd gotten me a fabulous present that she was dying to give me.  i was, of course, dying of curiosity as to what it was, and her excitement was definitely warranted: 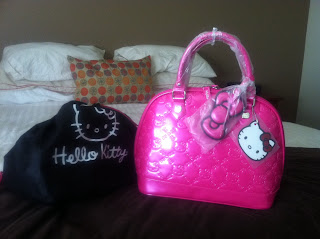 pretty sweet, right?  i'm pretty easy to buy for - hello kitty anything is ooh'ed and aah'ed over by me.

it was nice to see my mom that morning, and she got a little face time with MIL too.  but the clock was ticking, and we had a 1.5-hour drive ahead of us to get to GGM's memorial service.  so she hung out as long as she could and then made a quick exit as we finished getting ready.

hey, if i had to go to a friggin' funeral on my big milestone birthday, at least i looked cute. 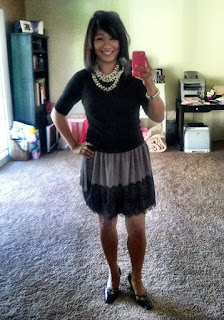 i'll spare you the details of the service, but suffice it to say that the highlight of it for me was the "adaptation" of a rhianna song.  it started out with "nana, when the sun shines we'll shine together" and ended with "nana, you can stand under my umbrella."  we figured that it was likely that less than 5 people in the church had any idea who rhianna was, and when the recitation was over i heard murmurs of "oh, that was so beautiful."

the bean fell asleep in the car on the way back, and when we got home i managed to slip away for a much-needed mani/pedi.  and i went all out, accepting every extra those sly women threw my way.  paraffin wax?  sure.  deluxe pedicure with various scrubs and moisturizers?  okay.  extra bonus massage time on my hands and arms?  hey, why not?  when all was said and done, my total even before tip was...a lot.

when i got home, the bean was still down for the count but woke up about ten minutes later.  with MIL gone to take FIL to the airport for his flight home (yeah, he was home for just barely two days, just for me), we piled into the car with brother wan for points unknown.  well, unknown to me and the bean.

the hub had asked me weeks ago what i wanted for my birthday.  i mentioned before that i really, really wanted disneyland annual passes for all of us so that we could go and have some fun, riding rides, grab some dinner, watch fireworks whenever the hell we pleased.  the hub initially rejected this idea, considering the - uh - financial investment this entailed, and asked me if i wouldn't rather have a new computer instead.  even though the latter would be much more practical, i didn't want to be practical on my birthday, dang it.  it's always more fun to be a little frivolous.

so when we ended up at downtown disney with the hub toting this: 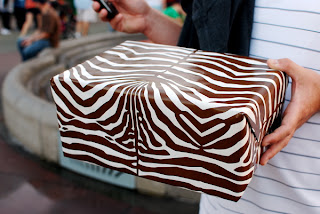 i was really hopeful.  although that box could've contained anything - a pair of shoes, a handbag (which i'd also said i would love, since i still have yet to add a tory burch or marc jacobs to my collection).  and then the bean took hold of it and handed it to me. 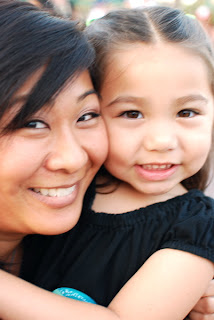 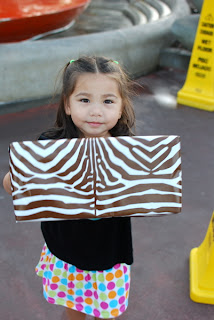 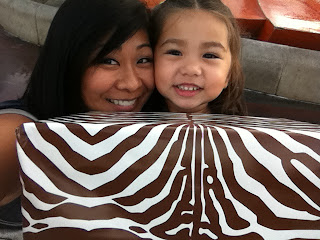 the box was light as a feather.  heh.

when we headed over to the security checkpoint, i kind of had a feeling that they weren't gonna let us go through without seeing what was in that box.  with the hub carrying it behind me, i went through and had my bag checked and then as he explained to the staff that it was a birthday present, i watched the guy shake his head and tell him that he was sorry, but the box would need to be opened before they could allow him through with it.

and so we stepped off to the side, i ripped the paper off, and did a gleeful happy dance as i pushed the tissue paper aside to find a year's worth of fun at the happiest place on earth. 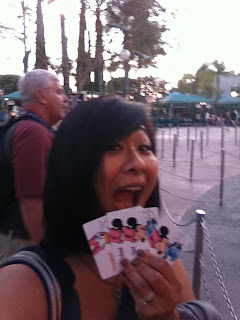 redeeming them at one of the ticket booths was a bit of a process, as we managed to get a "cast member" who wasn't exactly feeling the disney magic.  she was old and grumpy, and tried to pawn us off on another window (which would've required getting back in the line), but we finally got through and i got a special button to wear. 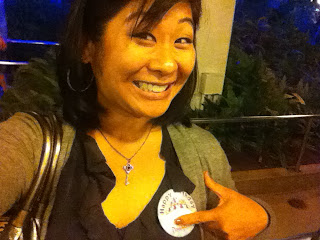 this button alerts all cast members that you encounter that it's your special day, and i grinned and chirped a cheerful "thank you" about a zillion times everywhere we went.

sadly, the blue bayou restaurant was closed - looked like it's being remodeled.  bummer.  so we settled for a quick dinner on main street, rode the "nemo" ride for the bean, and then settled in for the fireworks show.  so nice of disney to celebrate my birthday with such a fantastic display of pyrotechnics.  heh. 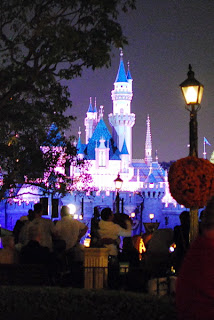 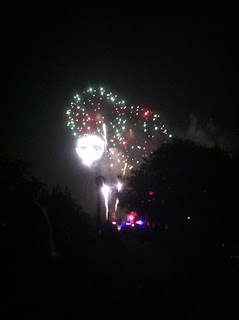 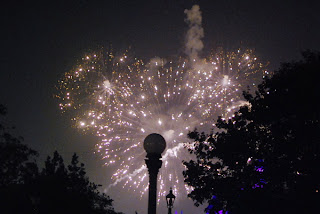 as we followed the giant crowd towards the exit, i tried to capture a bit of the halloween decor that's already in place. 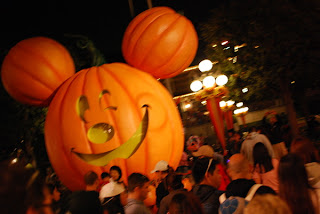 we'd discovered that MIL had misplaced her keys, but thought she'd likely locked them in the car.  the hub and i went to get ours while brother wan rode the tram with her, and then we set off to try and find them in the 10,000-car structure.  it wasn't easy, and we ended up being stopped by security as we went back around for the third time to get to the right level.  turns out you have to be escorted by a member of their security team if you're going in there after a certain hour.  just like having to open that wrapped box before being allowed in, there were lots of security-related rules in place as a result of 9/11.

MIL had called AAA for assistance, but was told it could be up to an hour before they arrived.  but the security guard informed us that there were blue emergency buttons sprinkled throughout each floor.  all we had to do was push one and someone would come to help us - and they were usually equipped with some basic tools.  by the time we found her and brother wan, they'd already been helped out by another member of security wielding a slim jim. 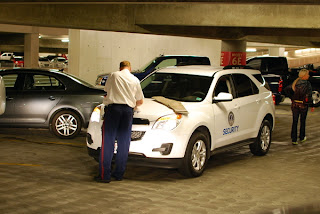 as we sailed through the mostly-empty structure on our way out, i tried to get a picture of one of the blue buttons.  of course, i failed. 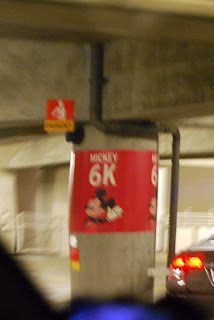 but you get the picture.  now, see?  if you ever have car trouble while parked at disneyland...look for a blue button.  quicker than AAA, and done with a smile.

much like the one on my face from the moment we arrived till the very second we swung back onto the freeway towards home.  yo, i have a full YEAR of fun ahead of me!  with her awesome school schedule that lets her out at lunchtime every day, the teen and i are already planning on heading to disneyland at least once every couple of weeks right after school.  woo-hoo!