back in the saddle, er, kitchen, again

okay, i did make a pan of my beloved tater tot casserole for me and the bean the other night, but that doesn't really count.  well, it does, but kinda not really.  bah, i'm confusing myself.  anyway..

while the ILs were home, we did a lot of eating out.  this is totally cool, i love eating out, and the few times we did make dinner it was usually BBQ (which i also adore).  but i've kind of lost my way in cooking meals at home lately, and it was good to finally get down and dirty in the kitchen again.

remember my grand plans to do deep-fried oreos and funnel cake at the bean's birthday bash?  in all the craziness of the day, i had zero time to do it.  i was so sad - i'd even borrowed my buddy lilcee's little deep fryer to get the job done!  instead it sat in the corner of my kitchen, unloved and unused.

then the other day, i was watching a show called "top secret recipes" where the dude attempts to recreate stuff from national chain restaurants.  it's actually really fun to watch, and the first episode was all about trying to make original recipe kentucky fried chicken from scratch.  of course, this left me with a mad craving for fried chicken (but not the desire to buy it from KFC).  you know where i'm headed with this, right?

i put some chicken in salt water to soak for a couple of hours, and when it was time i busted it out: 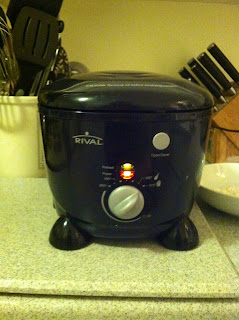 i really would've preferred to do this outside to keep the house from smelling like a fast-food joint, but it was dark and i just didn't wanna. so i turned the fan on high, dredged my chicken pieces in some flour, and dropped 'em in.  look, so cool: 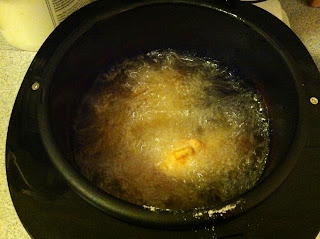 i closed the lid and watched the steam pour out from the top and get sucked up by the fan.  while it cooked, i chopped up some cabbage and ham for the side dish and tossed some crescent rolls into the oven.

i'd also baked half a batch of hot cocoa cookies from the how sweet blog, but lacked the patience to let the dough chill in the fridge before baking.  hence, these sad (but delicious) morsels. 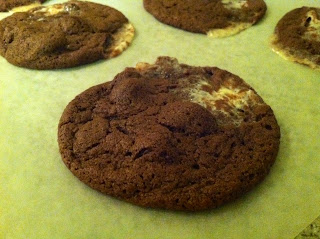 and then i forgot to take a picture of my dinner until i'd already hoovered half of it up.  oops. 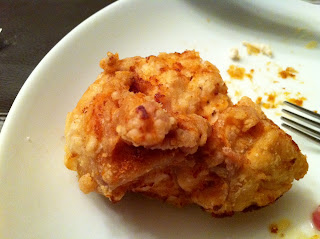 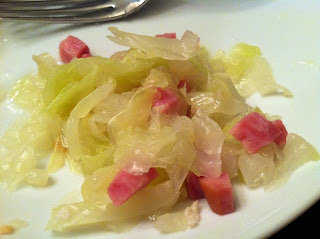 i'm so out of practice with this taking pictures of my food thing.  geez.

the second episode of the show was about cinnabon.  mmmmmmmmm.