so i briefly mentioned that my iPhone was out of commission.  it happened on thursday, and i've been so dang bitter about it.  it also brought to light how addicted to that damn thing i am.  what on earth did i do before?  it's almost embarrassing.

and it all stemmed from a load of laundry.  i was sorting clothes, decided that the shorts i was wearing were grubby and needed to be washed, and put them in the basket.  i trotted over to the laundry room, got the machine going, dumped the clothes in, and went on my merry way.

right then, i thought of something that i just had to text to the teen at that very moment, but i couldn't find my phone.

you know where this is going, right?

yes, you do.  after checking all of the usual spots where i would typically leave my phone, i remembered having it in my pocket.  the pocket in the shorts that i'd just stripped off and carelessly tossed into the washing machine.  full of...water.  mothereff.

i scurried back to the laundry room like my ass was on fire, threw the lid open, found the shorts right on top and pulled out my sopping wet iPhone.  stupidly, i pressed the home button and watched the screen flicker on for a nanosecond and then shut down completely.  dammit.  i bet that's the moment that sealed my fate and fried the insides of my phone beyond belief.

in the kitchen, i tore the phone out of its case (the brand new hello kitty one that the teen and bean had just given me for my birthday) and dried it off as best as i could with the nearest towel.  remembering a tip from others who've soaked their apple products, i found my supply of rice (yes, a full bag of uncooked delicious jasmine goodness), plunged the thing deep into the plastic bag, and sealed it shut. 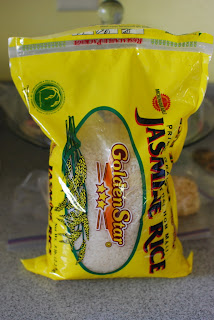 and then i bawled my eyes out.

no, i'm just kidding.  but i kinda really wanted to.  instead, i used social media to tell my sob story.  i got lots of sympathy, tips based on similar experiences, and admonitions to leave it alone in the rice for a full week before attempting to turn it on.  i used MIL's phone to text the teen and let her know that i couldn't be reached via my own phone (although she'd already laughed hysterically at me via twitter) and emailed the hub, although i wasn't sure if the reaction would be an endless run of teasing or a tongue lashing over the practically brand-new phone (i got a slightly sympathetic but obviously distracted response, btw).  but man!  this was my fourth iPhone (the first one was the original 3G, upgraded two years later to the 4, and then a white version when the hub moved the teen and me from at&t to his verizon account) and i'd always been so careful not to get it scratched or drop it or anything like that.

when he got home, he gave me a super old relic of a phone to have on hand so that i could at least have something in case i needed it.  look at this thing: 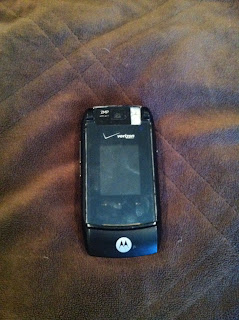 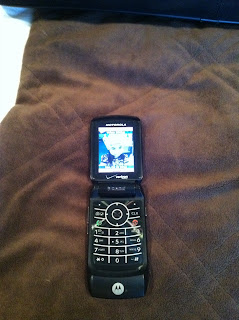 oh yeah - i did use it to snap a couple of pictures of the bean at her school party and send them to the hub, MIL and the teen.  but the quality of those photos...yikes.  it's so funny to think of how high-tech this was not so long ago.

hey, have i ever mentioned that i'm terrible at following instructions when i don't want to do what i'm told?  because i left the phone alone, alright - for about 24 hours.  after scouring the google for more information on what others have done in this situation, i thought maybe there might be a chance of at least backing up my data.  i'm awful at remembering to sync up my phone on my desktop, and found that the last backup i'd done was a full month ago.  eek.  although it could be worse.  at least the worst case scenario meant losing the last four weeks' worth of pictures and stuff.  and so against the solid advice from friends like the monkey and the potato, i dug out the cable and connected the phone to my computer.  this is what i got: 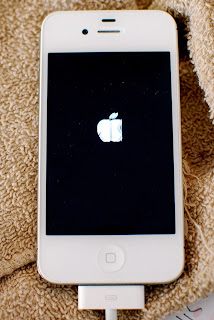 no, that's not an issue with my camera - the apple is indeed fuzzy.  not a good thing.  but i tried to convince myself that it was a good sign that i got something other than a full-on black screen.  right?  right??

later that evening, i peeked at it again and felt a little more confidence at the sight of these clear icons: 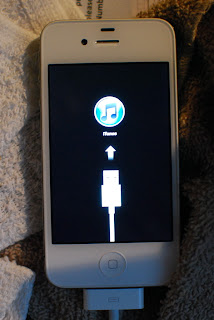 iTunes actually recognized that there was an iPhone plugged in, and declared it in "recovery mode."  at this point, i figured that the last month's data was as good as gone anyway, and hit the button to restore the phone back to original factory settings, erasing everything that had been on it before.

except that it didn't work.  i got some error message that told me nothing other than the fact that i was basically fucked.  yeah.

meanwhile, the hub had finally realized that it was a great opportunity to give me shit and threw out remarks every so often like "well, hey - christmas is coming!" or "the 3G version is only $49..."  bah.  not to mention that the 3G wouldn't work on the verizon network anyway.  neener neener neener.

but he finally took pity on me and my miserable face and told me to call the local apple store to see if they had any refurbished phones in stock.  i'd read online in my extensive research that lots of other folks who'd sustained water damage to their phones had been able to replace theirs for $200.  this was a whole lot better than what verizon had to offer - buying a new phone at full retail price to the tune of $600.  the girl who answered my call at apple said that they could help, but i needed to make an appointment.  luckily, there were lots of time slots open and i chose one for later that evening.

i started getting pretty excited again, and my mood totally turned around after that.  i'd gone for a run earlier, which was completely asstastic with no music or training app to listen to.  i did my whole 3 miles in complete silence aside from my huffing and puffing, the sound of my feet pounding on the pavement, and the handful of early sunday morning cars that drove past.  it just plain sucked and totally killed my motivation.  i was still proud of myself for doing it, but damn - it was rough.

and wouldn't you know it...we hit traffic on the way out to pasadena and i was flipping out a little, worrying that my appointment wouldn't be honored if i was late.  alas, i flew in the door a mere five minutes late and had no problems checking in.

after the misery of the last few days, it turned out to be my lucky day.  hell, i probably should've bought a damn lottery ticket at that point.  because the guy who helped me must've been in a super great mood.  he chuckled as i told him my story, disappeared for a few minutes, and then told me "usually, you'd have to pay $200 for something like this.  but if you promise to keep this phone out of the washing machine, i'll cut you an awesome deal."

i was beaming.  BEAMING.  and that wasn't even the best part - after he programmed it with my number, he handed it to me with a smile, told us to have a nice evening, and headed back to help the next customer.

you guys, i got my waterlogged iPhone replaced FOR FREE.  is that the happiest possible ending to this story, or what?
at October 04, 2011